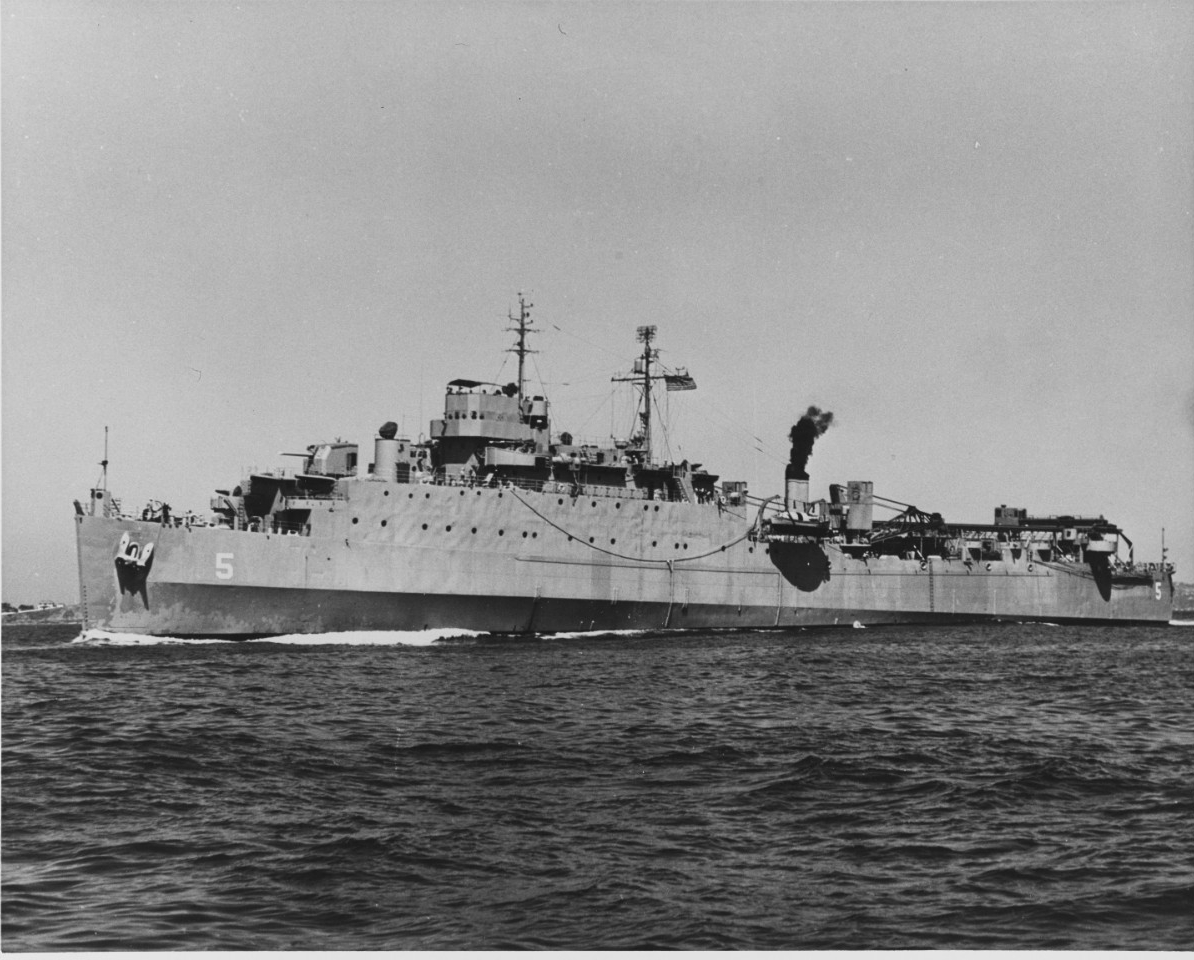 Gunston Hall (LSD-5) photographed during the later 1940s or early 1950s. Official U.S. Navy photograph from the collections of the Naval History and Heritage Command, NH 96886.

Gunston Hall is a colonial estate in Fairfax County, Va., about 15 miles down the Potomac River from Alexandria and not far from Mount Vernon. Built between 1755 and 1758, it is a representative piece of Virginia's colonial architecture and has been designated a national shrine. Gunston Hall was the home of George Mason, one of Virginia's outstanding Revolutionary figures. In addition to serving in the Constitutional Convention, Mason was prominent in drafting the first constitution of Virginia and was the author of the Virginia Declaration of Rights, which served as the prototype for the Bill of Rights, the first 10 amendments to the Constitution of the United States.

After intensive shakedown along the California coast, Gunston Hall prepared to sail for the Western Pacific, where she was to participate in every major operation from February 1944 to the end of the war, 18 months later. Loading 225 men from the 4th Marine Tank Battalion and 2 amphibious units, as well as 15 LVT's, 15 tanks, 17 CM's, and 15,000 gallons of gasoline, Gunston Hall departed San Diego 13 January 1944. On D-Day 1 February 1944 at Kwajalein Atoll, she stood offshore to unload her cargo as the Marines stormed the beaches on Roi and Namur Islands. Gunston Hall remained in the area to repair small craft until 6 February, when she re-embarked for former passengers and equipment and sailed to Guadalcanal via Funa Futi. The pattern she set here held for her participation in eight further key invasion efforts in the Pacific as the Navy "Island-hopped" Marines and Army troops ever closer to the Japanese home islands.

Through the rest of 1944, the versatile landing ship took part in the initial assualt invasions of Emirau Island 20 March, Hollandia 22 April, Guam 21 July, Pelelieu Island 15 September, and Leyte Island 20 October. The last assault culminated in the momentous Battle for Leyte Gulf, one of history's greatest naval engagements. While not actually involved in an invasion effort, Gunston Hall trained troops and shuttled supplies and men from the rear islands to the staging areas.

In 1945 Gunston Hall participated in the initial assault landings at Luzon 9 January, Iwo Jima 19 February, and Okinawa 1 April. After the first invasion waves went ashore at Okinawa-the Pacific's largest amphibious operation, involving over 1,200 ships and half a million men- Gunston Hall remained anchored at nearby Kerama Retto until 1 July to repair small craft. She was untouched by the enemy's fierce kamikaze attacks although she saw several other American ships hit and crippled.

Gunston Hall terminated her Pacific war duty 1 July 1945 as she sailed for a much needed overhaul reaching Portland, Oreg., 26 July via Guam, Eniwetok, and Pearl Harbor. After a period of shuttling small craft along the West Coast, she anchored at San Diego in mid-December to repair small craft. Gunston Hall returned to the Pacific in 1946 to participate in one of the most significant series of scientific tests of the era. Departing San Diego 17 April, she reached Bikini Atoll 5 May via Pearl Harbor for duties in connection with Operation "Crossroads," the famous series of atomic bomb tests. Departing Bikini 19 August, Gunston Hall returned to San Diego 3 October via Kwajalein and Pearl. Gunston Hall decommissioned 7 July 1947 at Terminal Island in San Francisco Bay.

Conversion to an Arctic LSD at Puget Sound Naval Shipyard, gave Gunston Hall a reinforced hull and a greatly extended heating and ventilation system which would permit her to operate effectively in the Arctic. She recommissioned at Puget Sound 5 March 1949, and, after shakedown, sailed north to participate in Operation "MIKI" in the Arctic Circle and later returned for Operation "MICOWEX." Next training and development operations along the West Coast occupied her until the outbreak of war in Korea. 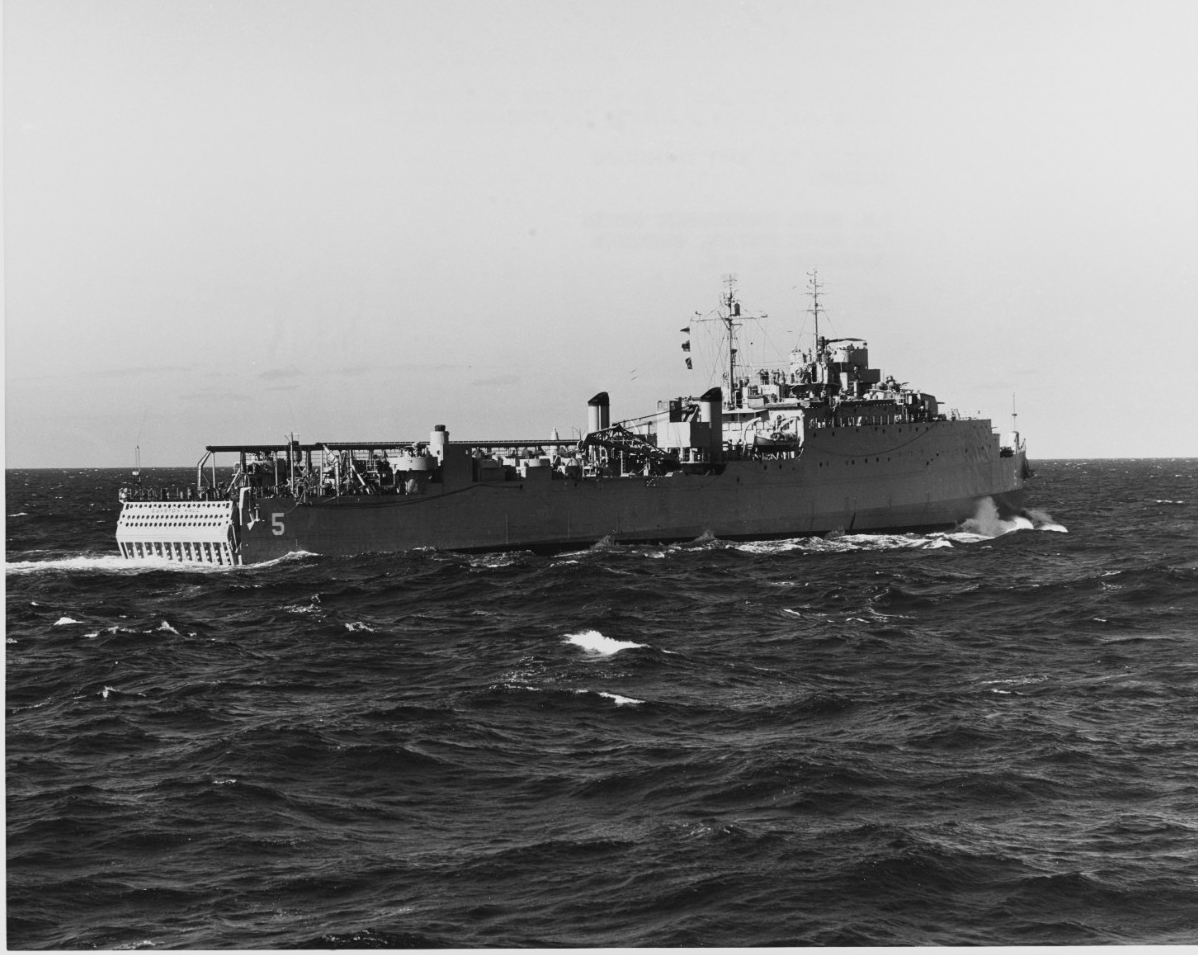 Gunston Hall (LSD-5) enroute to the Wonsan invasion area, 26 October 1950. She was one of many ships in the invasion convoy. Official U.S. Navy photograph from the collections of the Naval History and Heritage Command, NH 96879.

With elements of the 1st Marine Provisional Brigade embarked, Gunston Hall departed San Diego 1 July 1950 and reached Pusan, Korea, via Yokosuka 3 August. Disembarking the Marines, she took aboard 30 stretcher cases and returned to Osaka, Japan. On 10 September Gunston Hall sailed from Japan to participate in the brilliant amphibious operation at Inchon, Korea, 15 September. After the Marines had landed midway up the peninsula, threatening to cut the communist supply lines to their troops at -the tip of the peninsula, Gunston Hall made several shuttle trips to bring reinforcements. As the Korean conflict settled into its long and bloody pattern of near stalemate, Gunston Hall continued to shuttle troops and supplies between Japan and Korea, occasionally also acting on fire support missions for coastal minesweepers. During an overhaul in the summer of 1952, she was fitted with a helicopter landing and launching platform large enough to accommodate nine "whirly-birds," newest element in amphibious warfare.

When armistice ended the actual fighting in Korea, Gunston Hall sailed to Cheju Do, Korea, 4 September 1953. Remaining there until 22 September, she served in Operation "Big Switch," the exchange of prisoners of war. She then settled into a schedule of annual cruises in the Western Pacific, which took her from San Diego to various Asian ports, interspersed with Arctic resupply cruises.

Gunston Hall was part of one of the Navy's greatest postwar humanitarian efforts in 1955 as she joined TG-90 (Rear Admiral Lorenzo S. Sabin) at Saigon. South Vietnam, for Operations "Passage to Freedom." When the Geneva Accord of July 1954 divided the former French Indochina, over 800,000 North Vietnamese decided to cast their lot with the South rather than live under a Communist government. Since badly depleted French forces could not hope to effect the transfer of so many people, the U.S. Navy detailed nearly. 100 ships to carry refugees and equipment from Haiphong to Saigon in a 9-month period. Gunston Hall made five coastal runs carrying heavy barges between 2 January and 26 February 1955. In all, the Navy evacuated 310,848 North Vietnamese as well as 68,-757 tons of cargo and over 8,000 vehicles. Hard-pressed Sailors feeding and clothing the ragged refugees were rewarded when many of the 184 children born during (the Haiphong-Saigon passage were named after Navy vessels) Gunston Hall's pattern of WesPac cruises and Arctic resupply missions was broken a second time in 1962. During the Cuban missile crisis, she embarked elements of the 5th Marine Expeditionary Brigade at San Diego and headed for the Caribbean, transiting the Panama Canal 5 November. As the Soviets withdrew their missiles and the crisis passed, Gunston Hall transited the Canal again returning San Diego 15 December.

The veteran LSD sailed for the western Pacific 26 March 1963. After operations which carried her to Japan, Okinawa, Korea, Hong Kong, and several Pacific islands, she returned to the West Coast 13 November. Following operations along the California coast, she departed San Diego 6 November 1964 for duty with the 7th Fleet. Arriving Subic Bay 30 November, she was under way again a week later for Vietnam to support the fight to thwart Communist aggression.

Relieved 8 January 1965 she headed for Hong Kong, en route to Japan, arriving Yokosuka on the 24th. She visited Korea and Okinawa before returning to the battle zone. She unloaded cargo at Da Nang through 18 February, then headed to Okinawa for more supplies. She continued this pattern of duty shuttling between Pacific ports and Vietnam until departing Yokosuka for home 6 June.

Reaching San Diego 22 June, she prepared to return to the Orient. Sailing 6 August, she visited Hawaii, Okinawa, and Japan before returning to the West Coast 7 October.

After operations out of San Diego, Gunston Hall again turned her prow toward the setting sun 16 May 1966. She reached Chu Lai, Vietnam, 27 May and debarked the 9th Marine Engineers before sailing for Subic Bay to resume shuttling between Vietnam and nearby friendly ports, bringing war materiel to the Allies. She participated in Exercises "Hilltop VII" and "Mudpuppy I" in the Philippines before loading three experimental Navy Patrol Air Cushion vehicles (PACV) 15 December for transportation to San Diego. Back home early in January 1967, Gunston Hall prepared for future action.