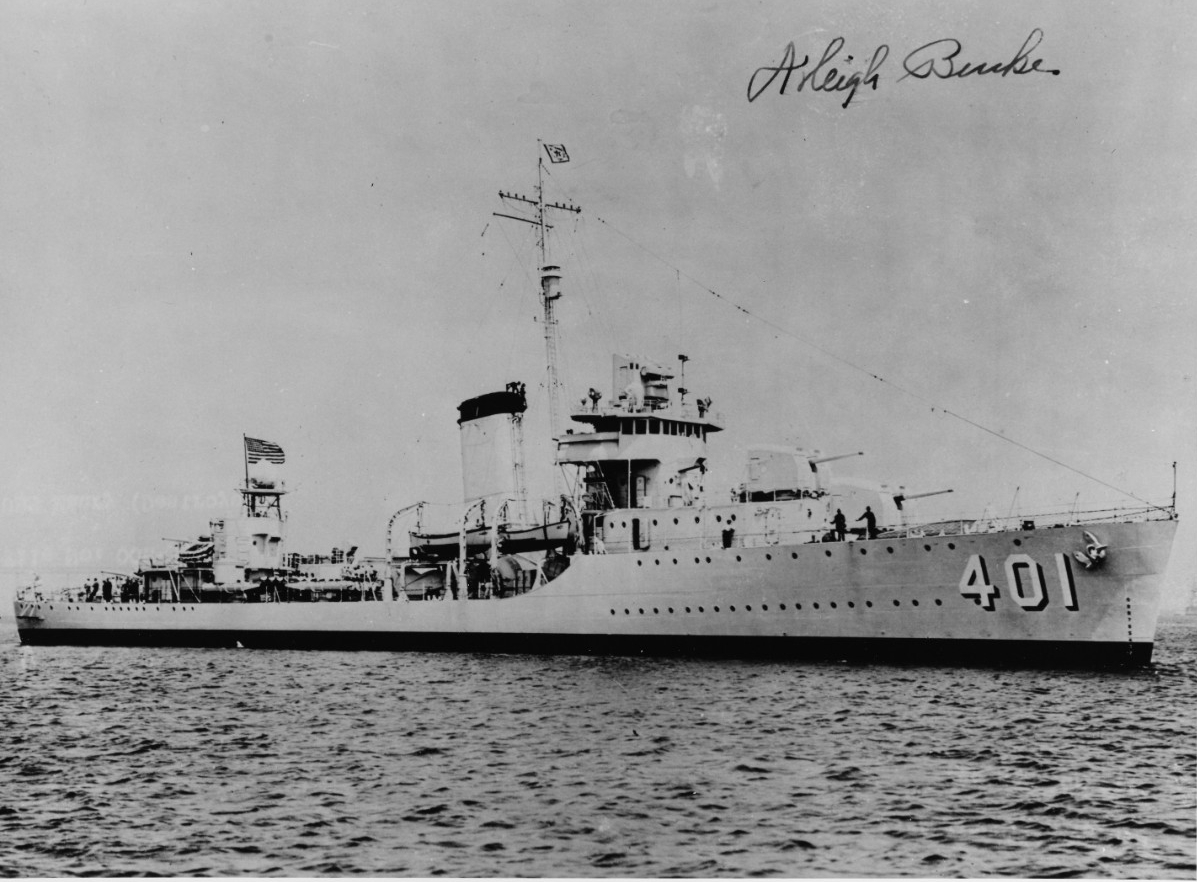 Maury (DD-401) photographed when first completed in mid-1938. The original print has been autographed by Admiral Arleigh A. Burke, USN, who served with Maury while he was a destroyer division commander in 1943. U.S. Naval History and Heritage Command photograph. Catalog#: NH 42150

Comdr. Matthew Fontaine Maury, astronomer and hydrographer, was born in Spotsylvania County, Va., 14 January 1806. Appointed midshipman 1 February 1825, he achieved the rank of commander 14 September 1855. He was appointed Superintendent of the Department of Charts and Instruments in 1842, and upon the establishment of the Naval Observatory in 1844 became its first superintendent, holding that position until his resignation in April 1861. During this period, he published some of his best known scientific works, and his "Wind and Current Charts," "Sailing Directions," and "Physical Geography of the Sea" remain standard. He became world famous as "Pathfinder of the Seas," the leading oceanograpber of history. Following his resignation at the outbreak of the Civil War, he joined the Confederate Navy, in which he attained the rank of commodore. At the end of the war he occupied the chair of physics at the Virginia Military Institute. He died at Lexington, Va., 1 February 1873.

Assigned to the Pacific Fleet after commissioning, Maury was operating out of Pearl Harbor when the United States entered World War II. She was steaming with Enterprise, (CV-6),en route to Hawaii from TF 8 operations near Wake, when word of the Japanese attack reached her soon after 0900, 7 December 1941. The ship went to general quarters as the force began an unsuccessful search for the Japanese Fleet. By the time the force returned to Pearl Harbor only one enemy vessel had been sighted and sunk, by carrier aircraft, the submarine 1‑70 on the 10th. For the remainder of 1941, Maury, in the screen of Enterprise, stayed in the Hawaiian area to guard against a followup attack by the Japanese.

With the new year, 1942, the Japanese advanced south and east through the islands of the southwest Pacific and Maury, with Enterprise and Yorktown (CV-5), headed in that direction for raids on Japanese installations on Maleolap Atoll, Taroa, and Reuters Islands. Striking on 1 February, the carrier forces and bombardment groups completed their missions despite heavy aerial resistance and were back at Pearl Harbor on the 5th. On the 15th, the force, now designated TF 16, got underway for Wake and Marcus Islands against which they launched surprise attacks 24 February and 4 March, respectively, returning to Oahu 10 March. There through April she conducted antisubmarine and antiaircraft exercises and served with the offshore patrol.

On 30 April TF 16, with Maury in the screen of the heavier ships, sortied from Pearl Harbor to aid Yorktown and Lexington in the Battle of the Coral Sea. Reaching the scene after the battle was over, the force returned to Hawaii, arriving 26 May. Two days later they sortied again, this time for Midway to repulse an expected assault on that base. On 2 June, having rendezvoused with TF 17, they were in position 350 miles north east of Midway. On the 4th the Battle of Midway commenced as Japanese carrier aircraft flew against installations on the island. By the 7th the American forces had routed the Imperial Navy, sinking four Japanese carriers and one cruiser at the cost of destroyer Hamman (DD‑412) and carrier Yorktown.

After Midway the force remained at Pearl Harbor for a month before departing once again for the South Pacific. Steaming via the Tonga Islands, the force headed for the Japanese‑held Solomons. By 7 August they were 40 miles from the target, Guadalcanal. During the ensuing Tulagi‑Guadalcanal landing operations, Maury served as plane guard for Enterprise as she carried out continuous flight operations in support of the assault troops. The destroyer remained in the Solomons area through the Battle of the Eastern Solomons, 24 and 25 August. In that battle, which prevented Japanese reinforcements from reaching Guadalcanal, Enterprise, among others, was severely damaged and TF 16 was ordered to retire to the Tonga Islands, from which they returned to Pearl Harbor, arriving 10 September. On 26 October the force was back in the South Pacific when an enemy force, including carriers, was sighted. Battle was engaged off Santa Cruz and once again Japanese reinforcements were turned back, this time at a higher price which included one carrier damaged, Enterprise, and one lost, Hornet, (CV‑8).

Maury spent the next 10 months in the Solomons area. Operating from Noumea and Espiritu Santo, she cruised on antisubmarine patrols and escorted carriers and convoys as American forces dug in on Guadalcanal and moved on against Munda, Rendova, Russel, Vella Lavella, and New Georgia. At the end of August 1943, she departed for San Pedro and a 6‑week availability period, returning to the combat area with TF 52 to support the invasions of Tarawa and Makin in the Gilberts 20 November.

Early in 1944 Maury joined TF 58, the fast carrier force., and put out to sea 19 January to screen the "flattops" as their planes raided Wotje, Taroa, Eniwetok, and the Palaus. In March the force began operating from newly won Majuro and from there Maury guarded the carriers as they went against the Japanese on the Palaus, Yap, Ulithi, and Woleai, 30 March to 1 April; covered the landings at Hollandia, 22 April; and raided Ponape, Satawan, and Truk, 29 April to 1 May.

After brief availability at Pearl Harbor, Maury rejoined TF 58, at Majuro 4 June. Two days later the ships sortied to support operations in the Marianas. First, they took part in the preinvasion bombardment of Saipan, raiding Guam and Rota during the same period, and then sailed north to strike at Iwo and Chichi Jimas and prevent enemy reinforcements from reaching the Marianas from those islands. On 18 June they received word of a Japanese force en route from the Philippines to the Marianas. The following day the Battle of the Philippine Sea began as enemy carrier planes attacked the 5th Fleet, then covering the Saipan operations. By the end of the 2‑day battle the Japanese had lost three carriers, 92 percent of its carrier planes and 72 percent of its float planes, a toll which left the Imperial Fleet in poor condition to carry out a war based largely on naval airpower. After pursuing the beaten enemy, the carriers, with Maury in the screen, struck again at the Bonins and then retired to Eniwetok, arriving 27 June.

On 4 July the fast carriers again raided Iwo Jima. Then they retired to the Marianas where they supported the landings on Guam and Tinian, 21 and 24 July, respectively. During the next 9 weeks, with Maury still in the carrier screen, the force struck again at Iwo Jima and then moved on to support offensive operations against Peleliu, Ngesebu, Angaur, Yap, and Ulithi. By 10 October they were off Okinawa, moving from there to Formosa and Luzon and striking at enemy installations in the Manila Bay area on the 15th. Eight days later, covering the forces in Leyte Gulf, they turned north again to engage a Japanese carrier force, now bereft of planes due to losses sustained in the Battle of the Philippine Sea and off Formosa. On the 25th, the enemy was engaged off Cape Engano and by the 27th their losses were increased by three cruisers and several destroyers,

Maury spent most of November cruising the waters east of the Philippines in support of operations on Leyte and Samar. Then, after availability at Manus, joined TG 77.4 and sailed 27 December for Lingayen Gulf to support the Luzon invasion. Attached in mid‑January to TG 78.12 for an abbreviated tour as convoy escort she rejoined TF 77 at the end of the month and until 10 February guarded Lingayen Gulf and its approaches.

Returning to Ulithi 16 February Maury was assigned to escort the battleship Mississippi back to Hawaii. Departing 22 March, she moored at Pearl Harbor 3 April. She spent the next 6 weeks conducting training exercises in Hawaiian waters and then continued on, via San Diego and the Panama Canal, to New York, arriving 14 June. There an inspection team recommended that she be disposed of and on 18 August she proceeded to Philadelphia where she decommissioned 19 October. Struck from the Naval Register 1 November, she was sold to Hugo Neu, New York, 13 June 1946; resold shortly thereafter to Northern Metal Co., Philadelphia, and scrapped by them at the end of the year. 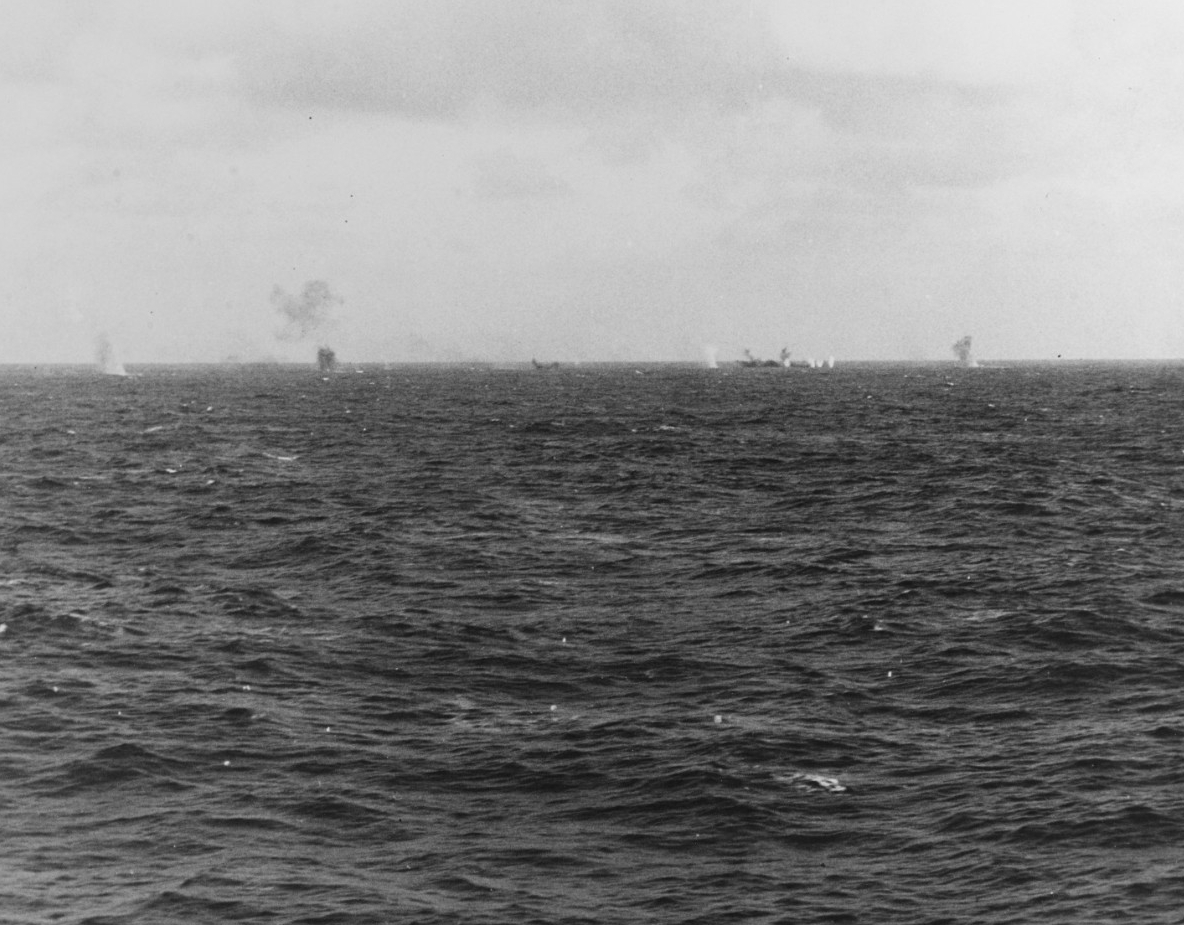