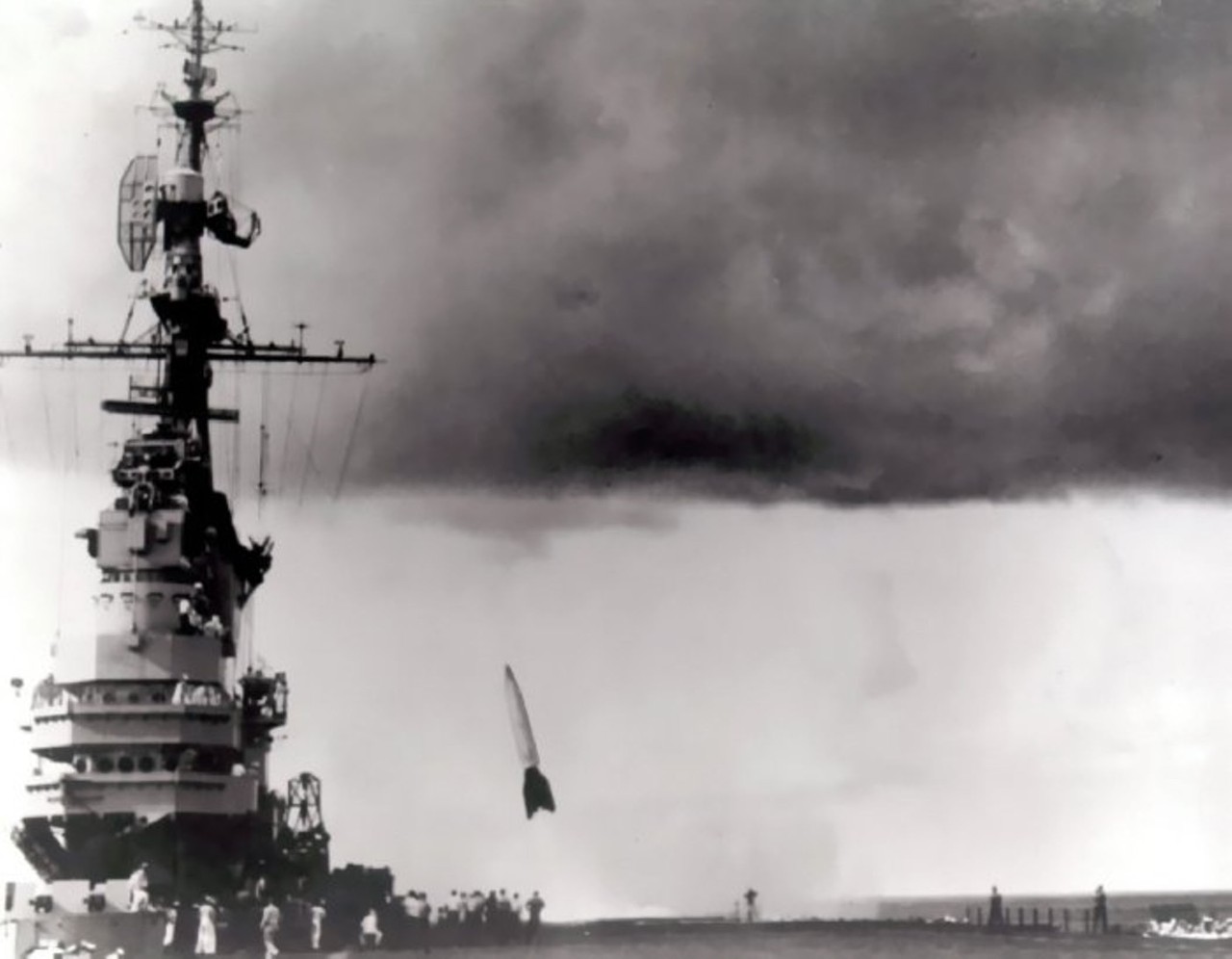 A V-2 rocket lift offs from the deck of the aircraft carrier USS Midway (CV-41), 1947.   Using these German-made vehicles, the United States Navy developed its own program to put an object into outer space.  Building on the V-2 experiences, Navy engineers and scientists developed the Viking rocket.  This rocket design was used by NASA to develop the rockets that took humans to the moon in the 1960s and 1970s.
(Photo courtesy of the Naval History and Heritage Command) 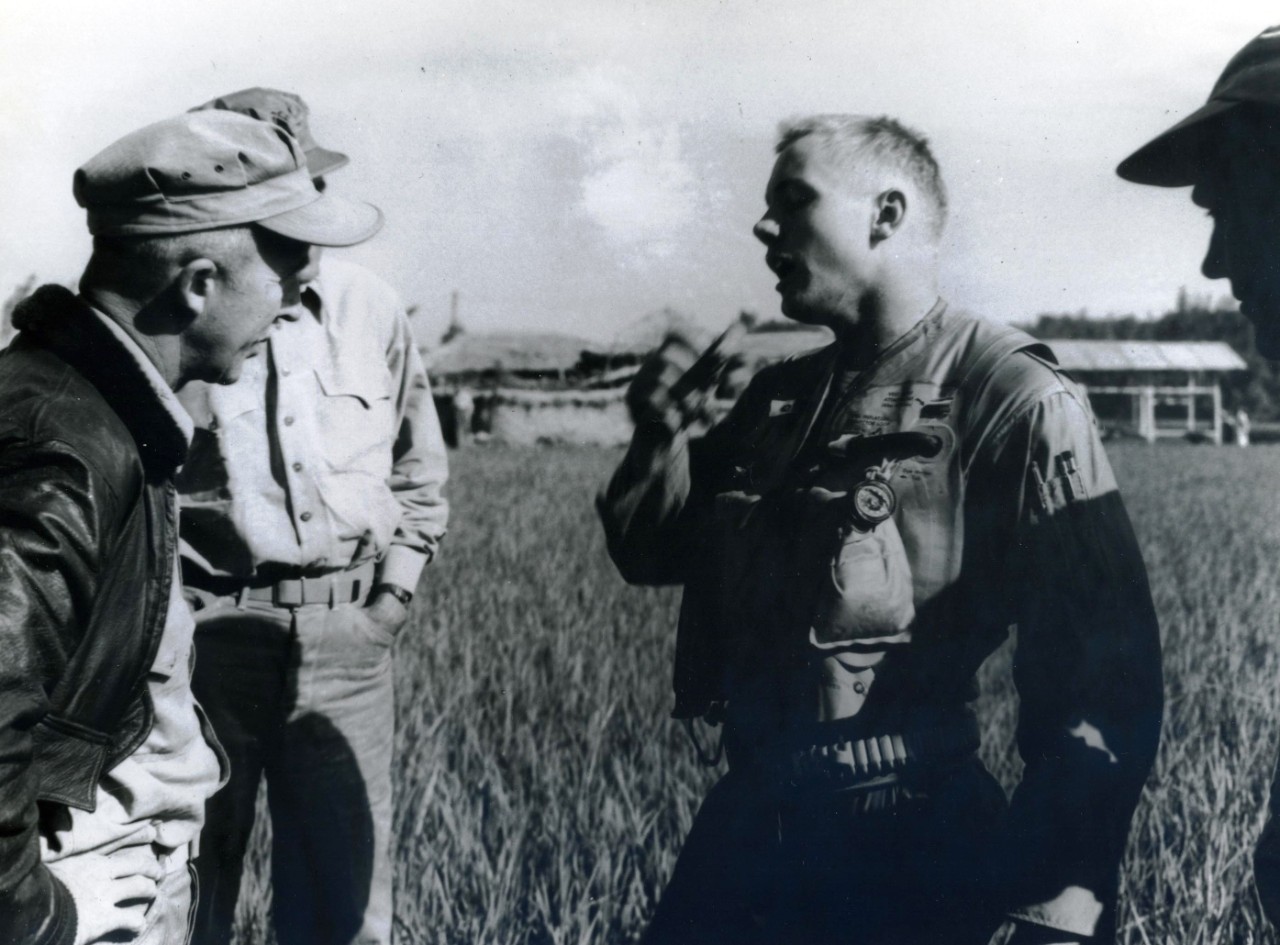 1951 - Neil Armstrong After Being Shot Down Over Korea

As a Naval Aviator, future Apollo 11 Astronaut Neil Armstrong flew seventy-eight combat missions in the Korean War.  While escorting a photo reconnaissance plane over North Korea in 1951, enemy ground fire forced Armstrong to eject from his F9F-2 Panther.   Rescued by U.S. Marines (shown here with Armstrong), Armstrong's plane crashed into mine infested waters nearby.  (Photo courtesy of the Naval History and Heritage Command) 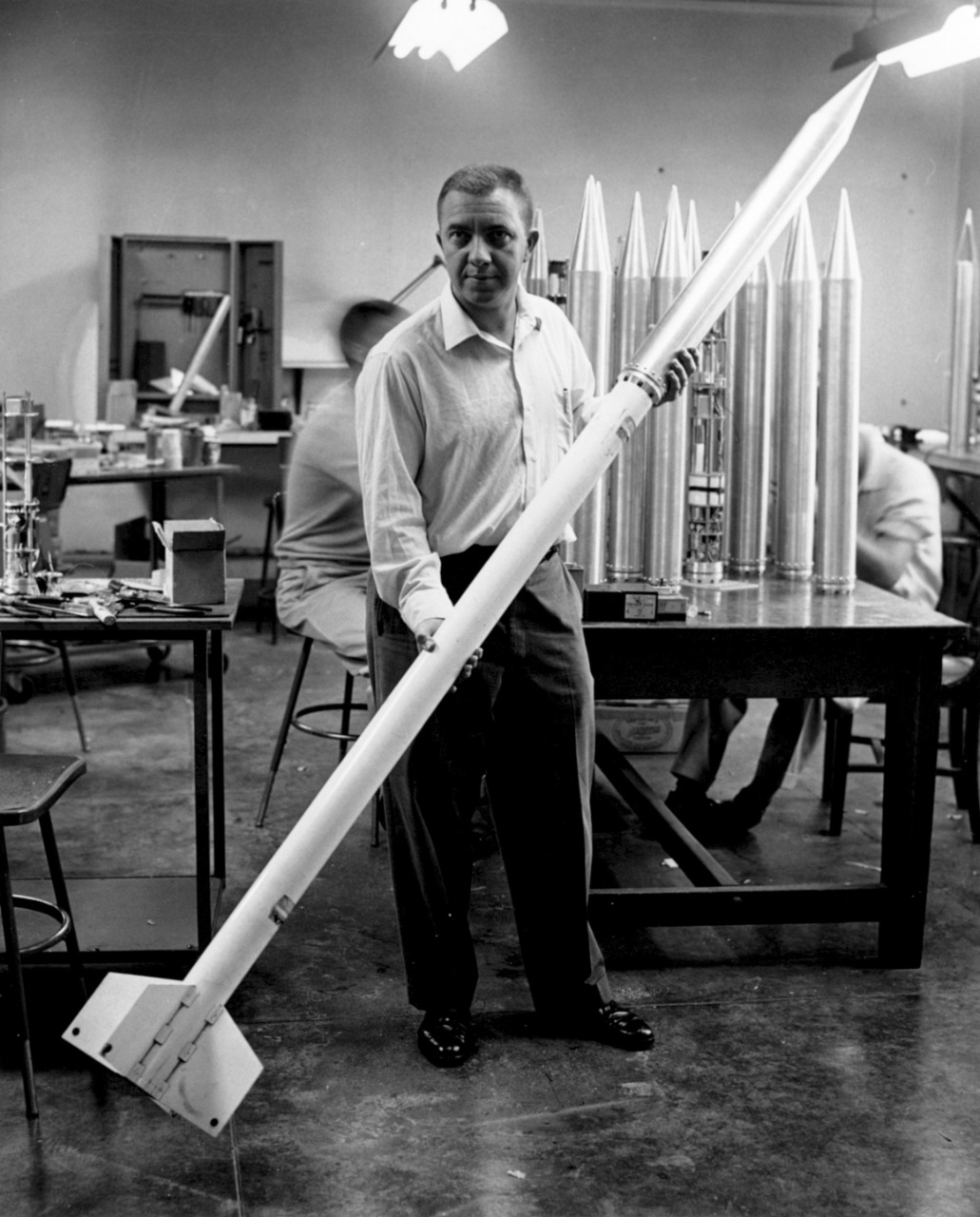 Astrophysicist and U.S. Naval officer James Van Allen is shown here holding a sounding rocket.   After serving as an ordnance officer in World War II, Van Allen's groundbreaking research work into rockets and radiation belts were vital to getting humans safely into outer space.   Among the many honors he received, Time magazine awarded him their "Man of the Year" prize in 1960.   (Photo courtesy of NASA/JPL.) 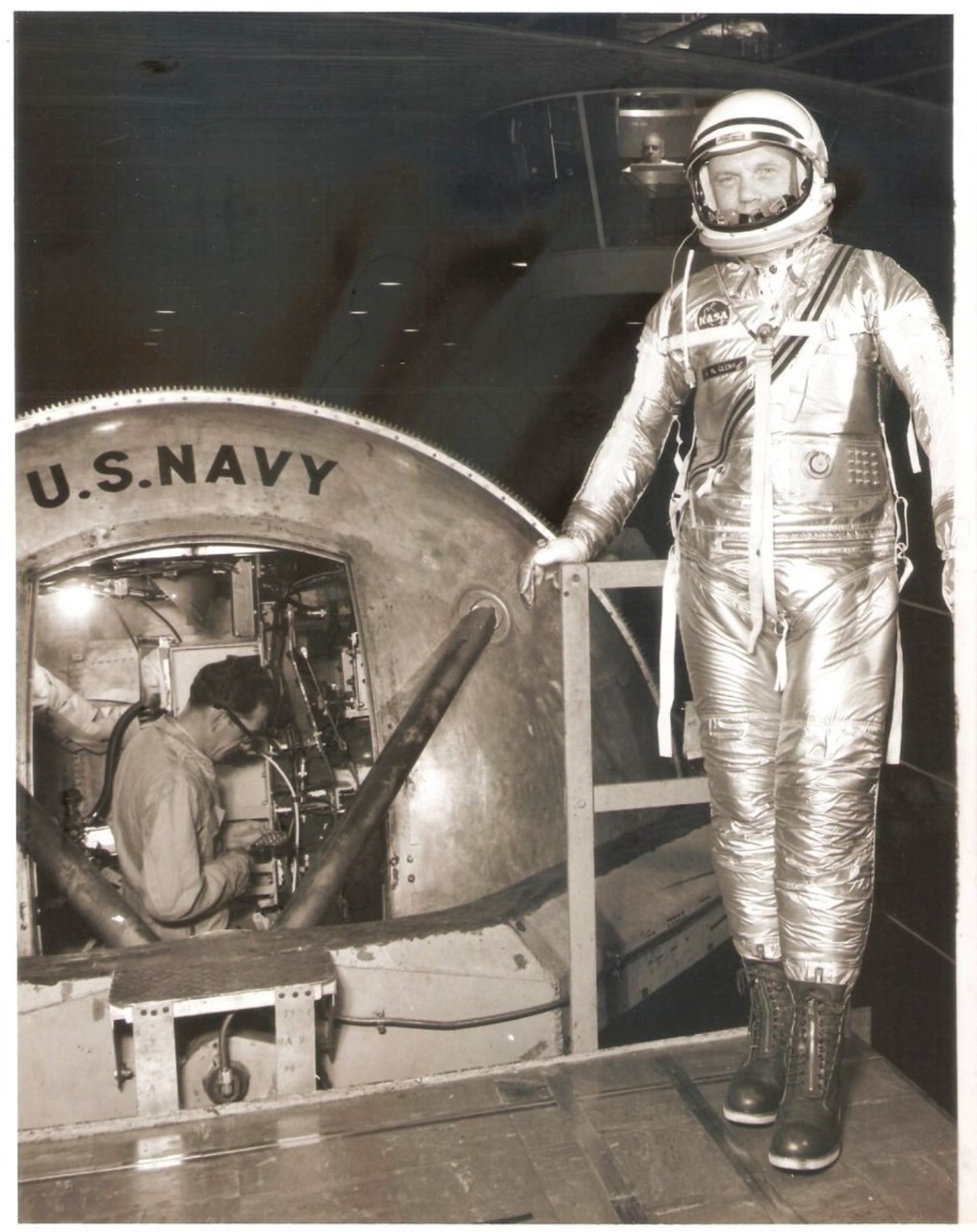 Shown here is Marine Corps Aviator and Mercury Astronaut John Glenn posing in front of the human centrifuge at Naval Air Warfare Center Warminster.   The purpose of the centrifuge was to train and prepare Astronauts for the high G-forces experienced in space travel.  Glenn referred to the machine as "sadistic," as Astronauts would be whisked around in tight circles at 100 mph.  (Photo courtesy of the Bureau of Medicine and Surgery) 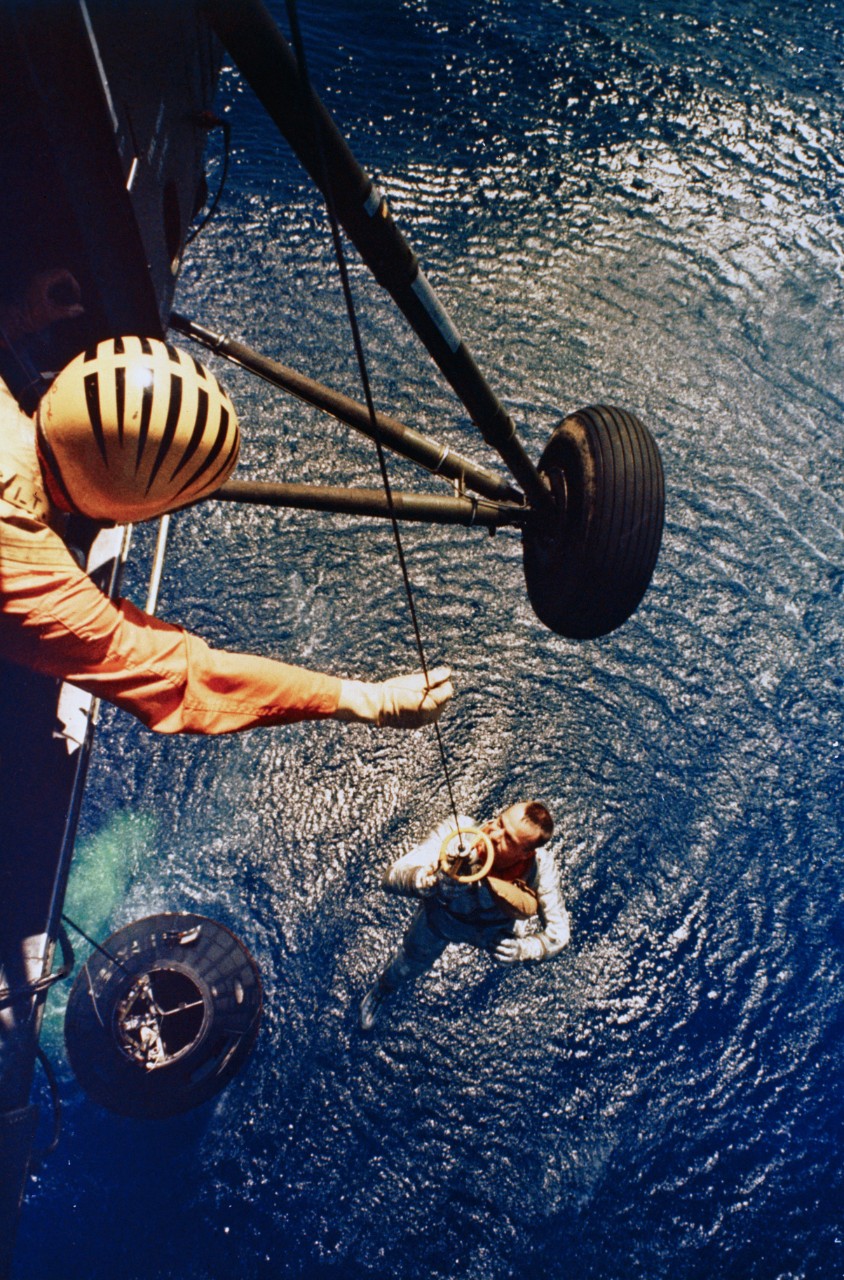 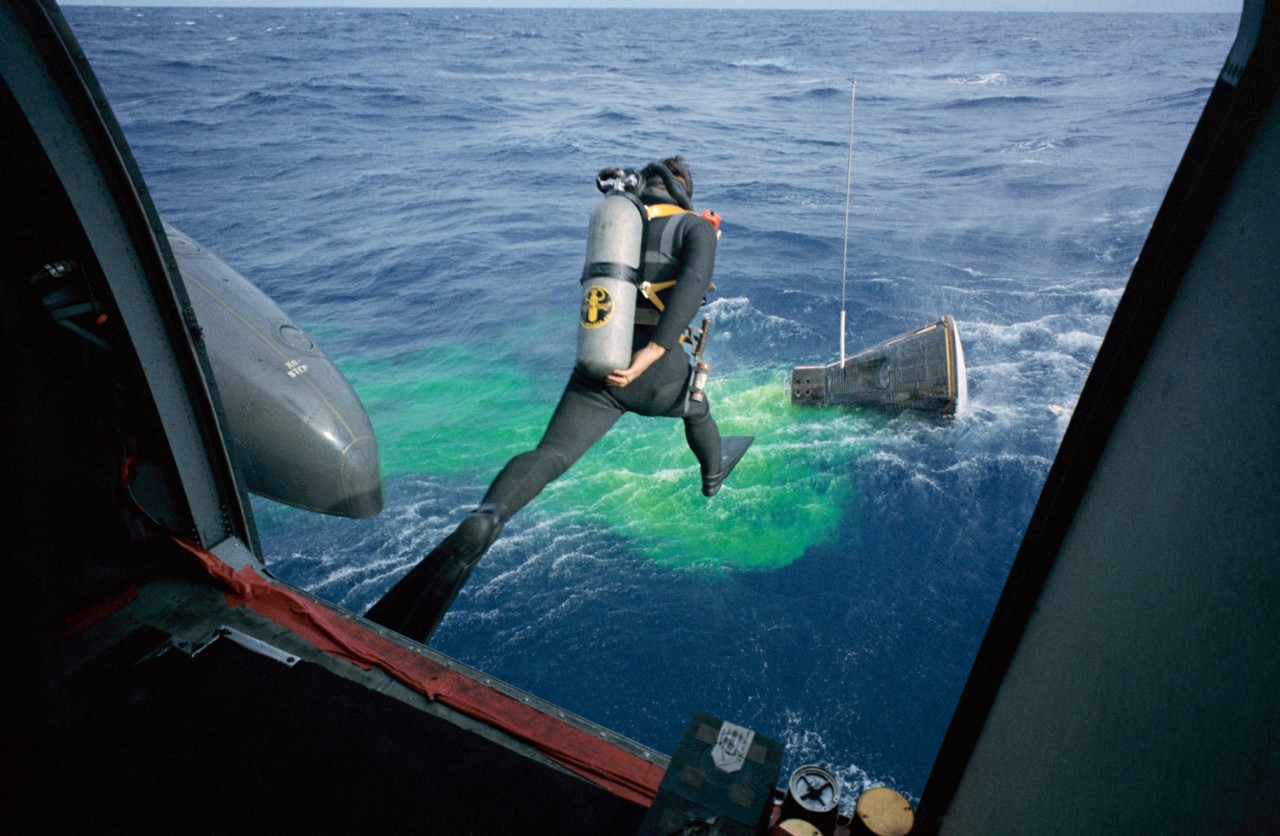 A frogman of the U.S. Navy's Underwater Demolition Team (UDT) leaps in full gear into the Atlantic to retrieve the Astronauts James Lovell and Buzz Aldrin of Gemini XII.  UDT members (forerunners of the Navy's SEAL teams) trained for months with practice space capsules to ensure the safe retrieval of both the Astronauts and the capsule.   The Navy's return address for the capsule recovery operations was officially known as "Splashdown USA"  (Photo courtesy of NASA) 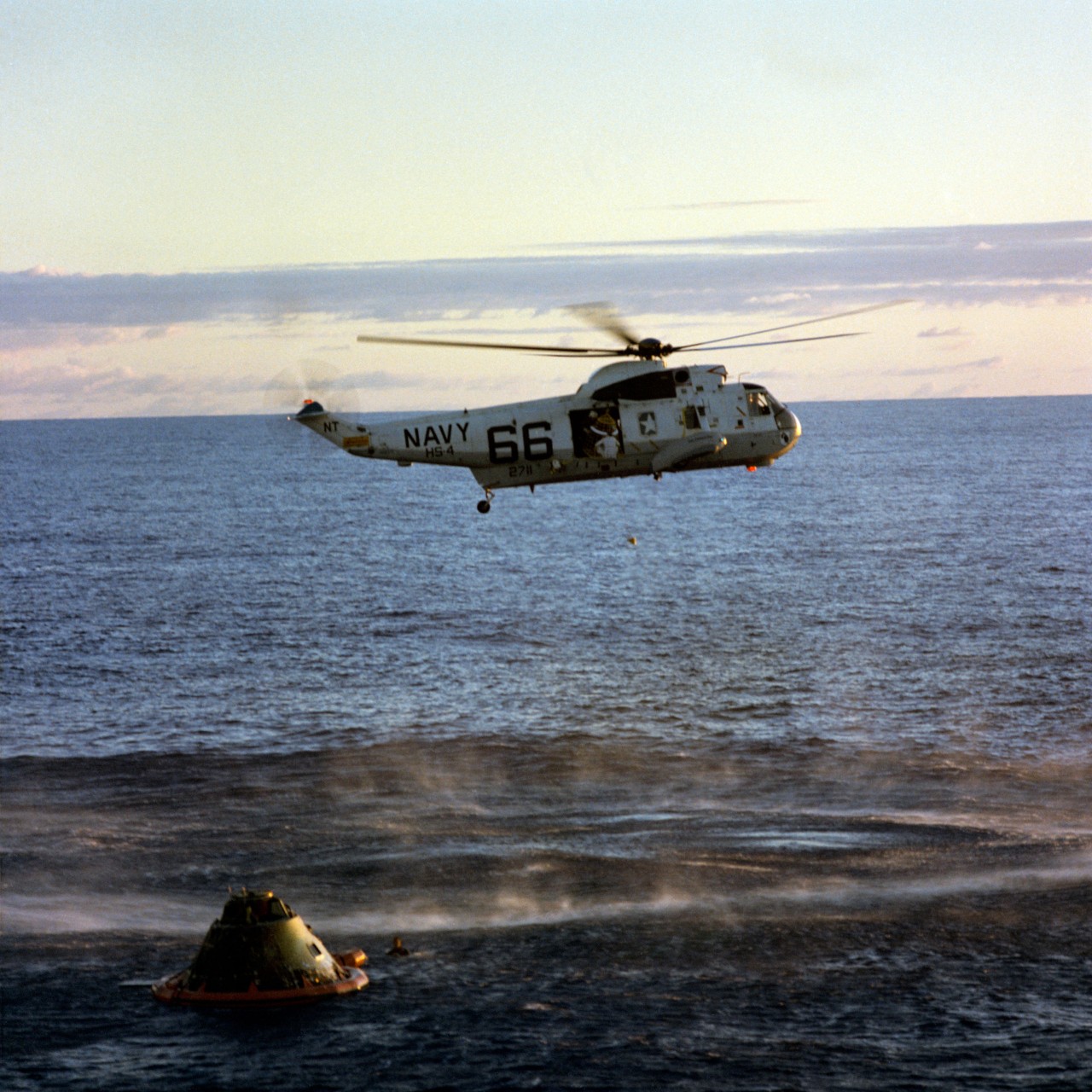 Helicopter 66 of Helicopter Anti-Submarine Squadron Four hovers over Apollo 10's Command Module (mission callsign "Charlie Brown"), 1968.   The Navy used "66" to recover Astronauts from Apollo 8, 10, 11, 12, and 13 and a national television audience saw it each time.   As a result of its fame, the Navy purposely kept the number "66" on the bird even when the Navy switched to a three digit identification system.  (Photo courtesy of NASA). 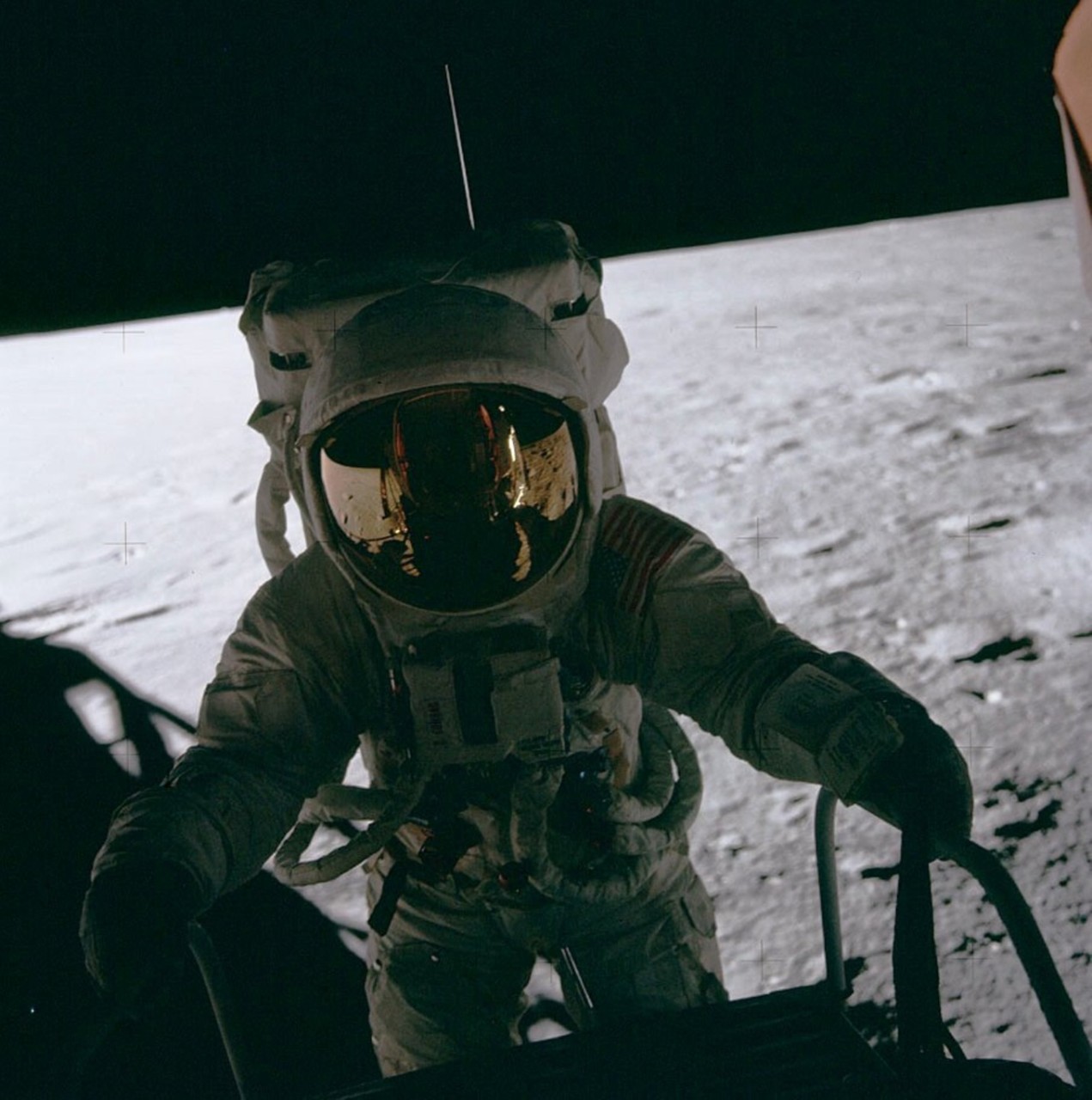 Astronaut Pete Conrad prepares to descend from the Lunar Modeule on the Apollo 12 mission, 1969.  Conrad had overcome many obstacles in his life to reach this moment.  He flunked 11th grade due to an undiagnosed case of dyslexia and was 5'6" in height.  Nonetheless, he perservered, and graduated from Princeton.  He went on to become one of the Navy's best test pilots and the third man to walk on the Moon.  (Photo courtesy of NASA). 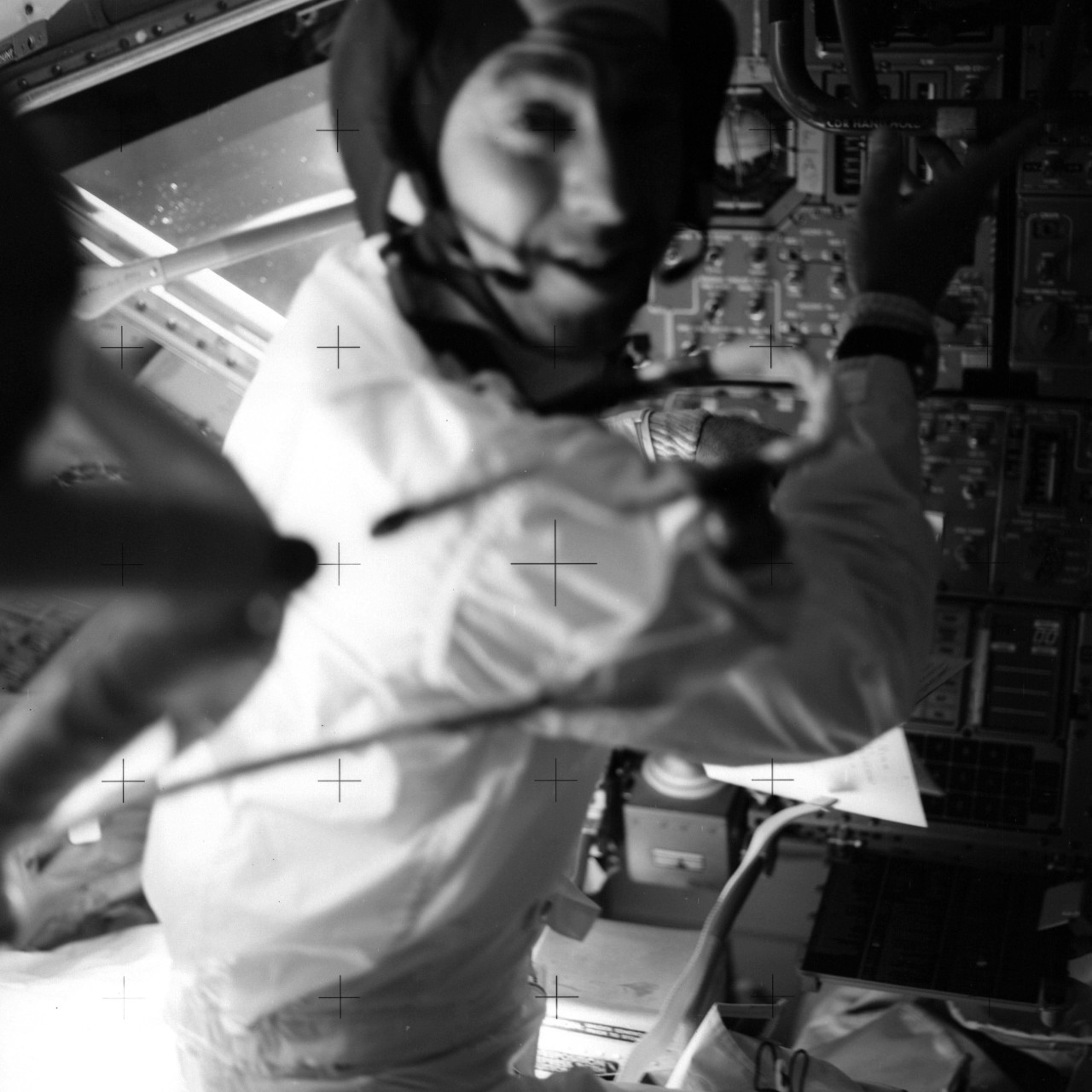 Naval Aviator and Astronaut James Lovell is all smiles working the controls during the Apollo 13 mission.  Shortly after the photo was taken, one of the oxygen tanks exploded leading Lovell to say, "Okay, Houston, looks like we have a problem."  The rescue has since gone down in history as one of the most famous events in NASA history.  President Bill Clinton later said that Lovell had, "the kind of resourcefulness, grit, and grace under pressure that is the province of heroes."  (Photo courtesy of NASA) 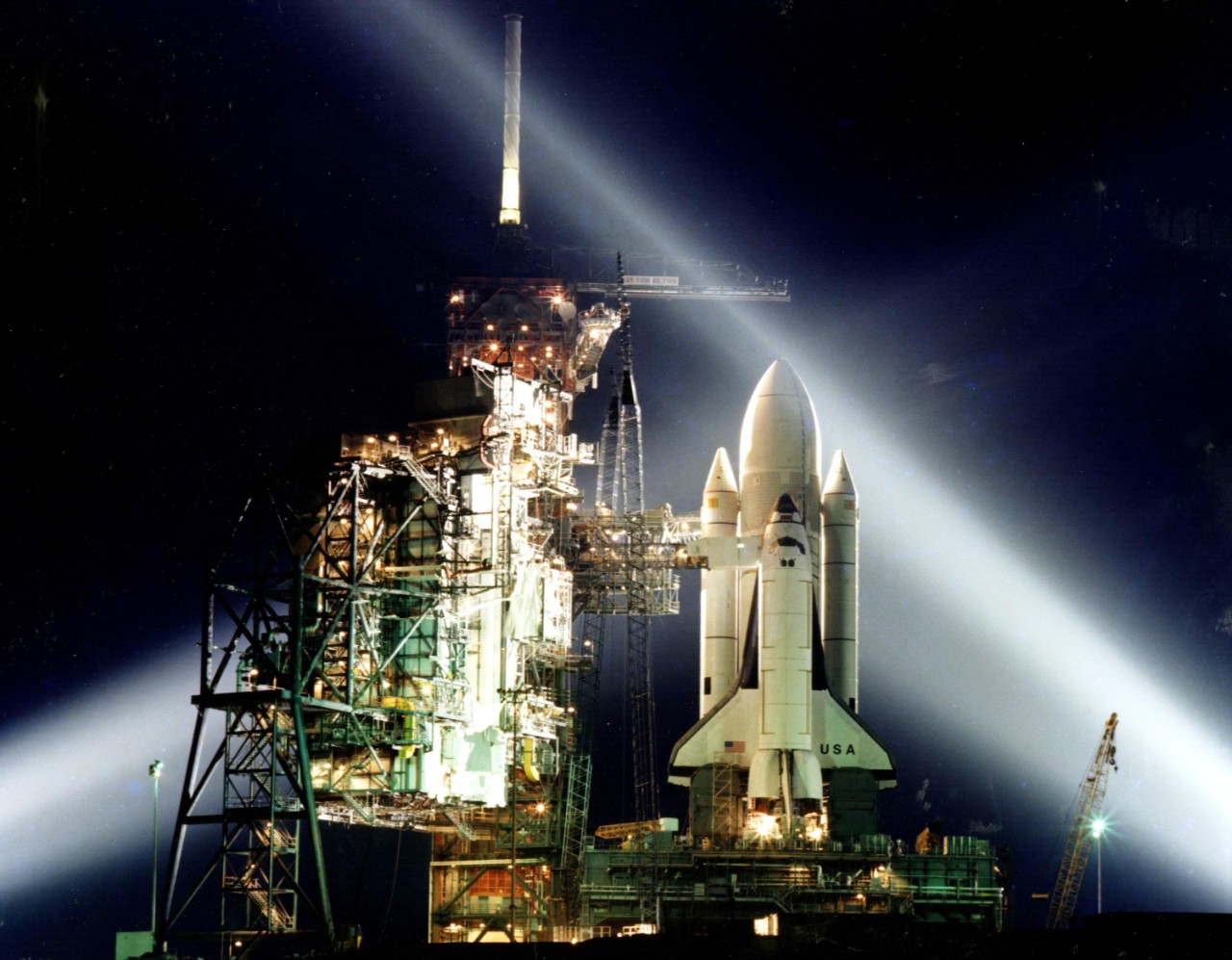 With the end of the Apollo program, NASA designated the Space Shuttle program as its successor.  With the all-Navy crew of John Young and Robert Crippen aboard, Space Shuttle Columbia initiated the program with a 1981 launch from the Kennedy Space Center.   The mission was Young's sixth mission to space, which included two trips to the Moon.  President Ronald Reagan awarded Crippen and Young the Space Medal of Honor.  (Photo courtesy of NASA)

Since the launch of STS-1 and Space Shuttle Columbia in 1981 and operation of the International Space Station in the 2000s, the United States Navy has continued to have a close working relationship with NASA and its manned space program.   The Navy has provided an increasingly diverse group of men and women -- pilots, engineers, scientists, and medical doctors - to the NASA Astronaut Corps.