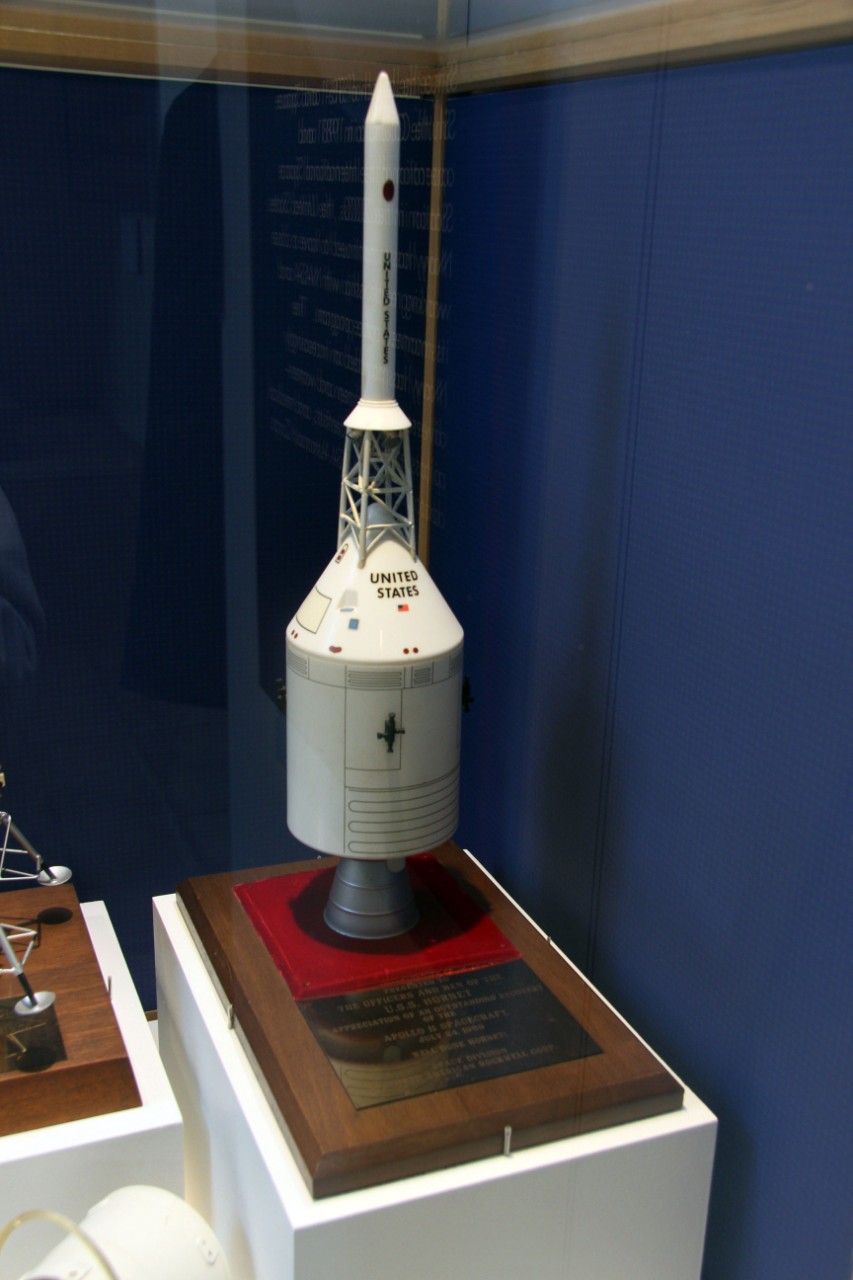 One Apollo 11 space capsule model on a rectangular wooden base.  The model sits on a piece of red velvet fabric.   There is a metal engraved plae on the front side "PRESENTED TO / THE OFFICERS AND MEN OF THE / U.S.S. HORNET / IN APPRECIATION OF AN OUTSTANDING RECOVERY / OF THE / APOLLO 11 SPACECRAFT / JULY 24, 1969 / WELL DONE HORNET! / SPACE DIVISION / NORTH AMERICAN ROCKWELL CORP."  On the back of the wooden base is a blue sticker with silver "DAVID W. TAYLOR / NAVAL SHIP R & D CENTER / BETHESDA, MARYLAND / 23428 CURATOR."  The model is 20.75 inches with an 8.175" width and 12.00" depth.   This model is of the complete Apollo spacecraft.  The model presents the Launch Escape System at the top, the Command Module in the middle, and the Service Module at the bottom.   North American Rockwell, the lead building conractor for the Apollo program, presented this model to USS Hornet's (CV-12" wardroom in appreciation for the aircraft carrier's work in recovering Apollo 11. 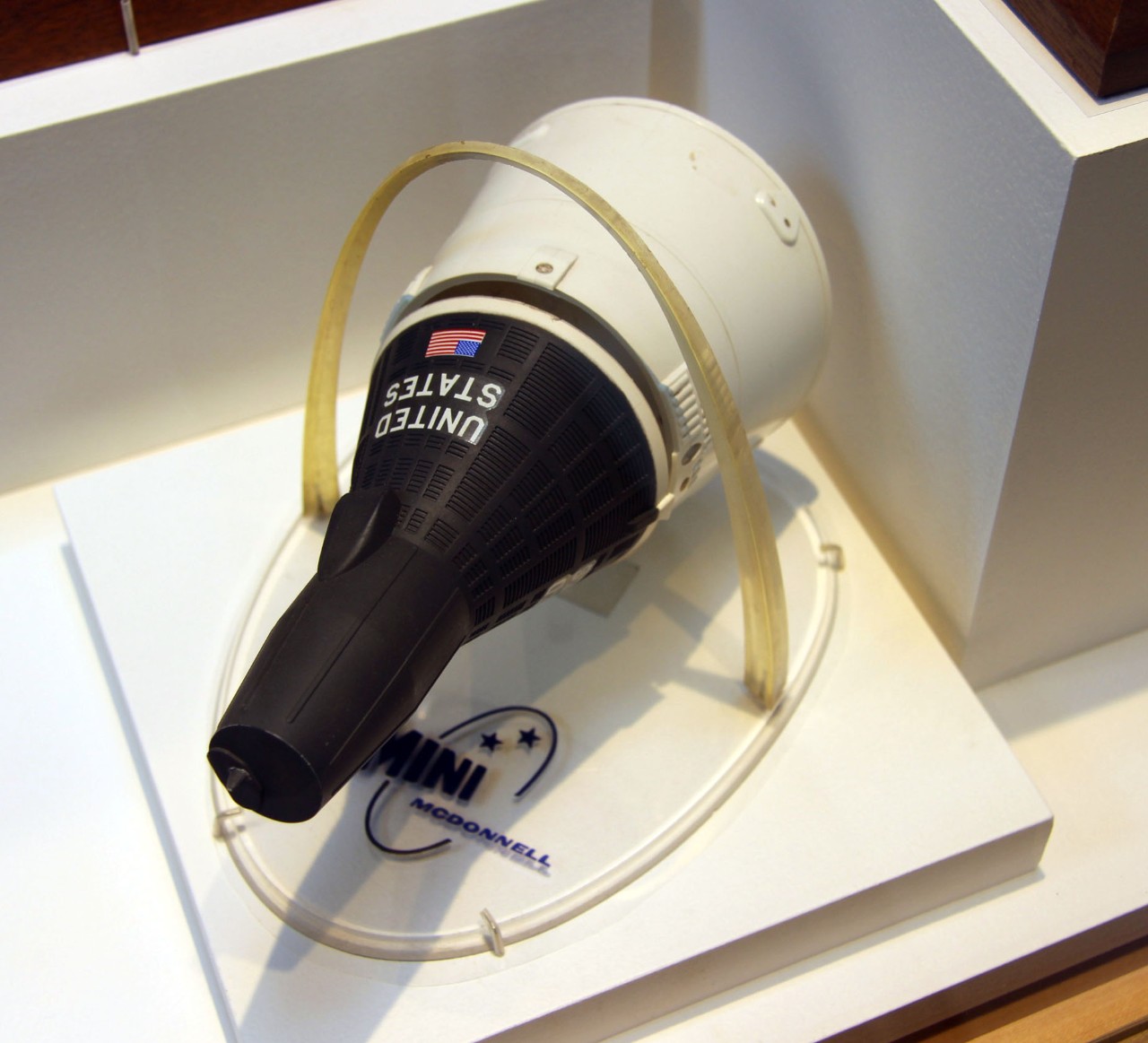 The model is partially open and attached to the elliptical base with a small plastic peg.  The base has text on the front with a logo that reads, "GEMINI / MCDONNELL."  An arch goes over the model and is  screwed into the base with two small screws, one on either side.  This model is 7.00" high with an 6.25" width and 8.00" depth.  Depicted under the famout Gateway Arch, the McDonnell Aircraft Corpporation, St. Louis, Missouri, was the lead contractor for the Gemini and Mercury programs, hench the arch.  McDonnell also developed several early U.S. Navy jet aircraft. 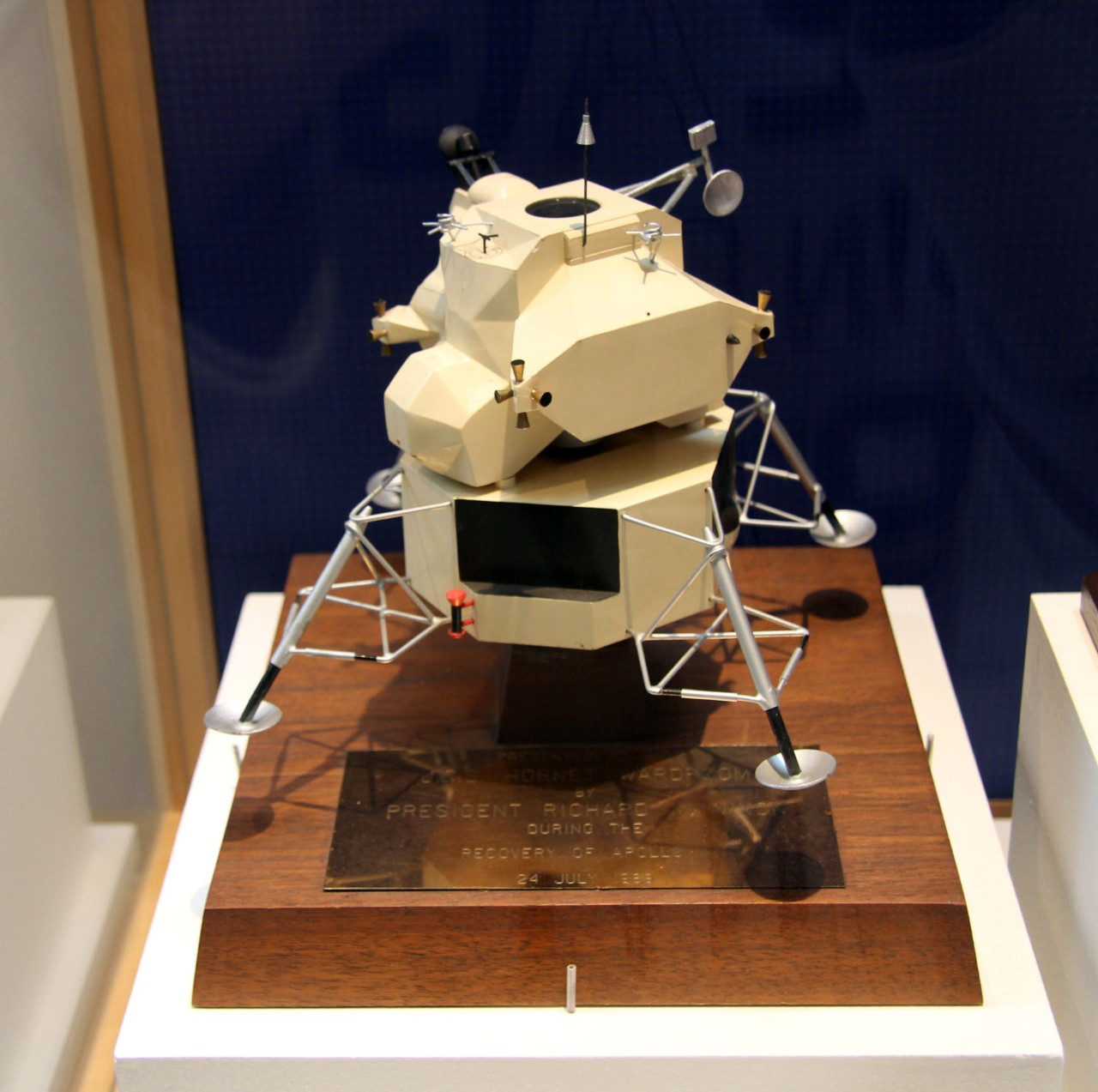 One lunar exploration module model on a square wooden base.  A metal engraved plate on the front side reads, "PRESENTED TO THE / U.S.S. HORNET WARDROOM / BY / PRESIDENT RICHARD M. NIXON / DURING THE / RECOVERY OF APOLLO 11 / 24 JULY 1969."  On the back of the wooden base is a blue sticker with silver, "DAVID W. TAYLOR / NAVAL SHIP R & D CENTER / BETHESDA, MARYLAND / 2202 CURATOR."  The model is 10.50" high with an 9.25" width and 9.25" depth.  This model was presented to the wardroom of USS Hornet (CV-12) by President Richard M. Nixon in appreciation of the vessel's recovery of Apollo 11.  Nixon was very interested in the Space Program and personally greeted the Apollo 11 Astronauts on board Hornet.  He became the first President to watch a launch in person when he witnessed the Apollo 12' launch in November 1969.