Getting to the Moon was only the first half of the two-part Moon equation.   In the second half NASA had to bring the Astronauts back home.   Not only was the Moon over 200,000 miles from Earth, but outer space is he most hostile of environments.   Once the Astronauts landed on the Moon, a plan had to be conceived to safely return them to Earth.   Providing its unqiue engineering and aviation skills, the United States Navy provice solutions to both parts of the equation.

"The stars will never be won by little minds; we must be big as space itself."  Robert A. Heinlein, science fiction author and Class of 1929, U.S. Naval Academy. 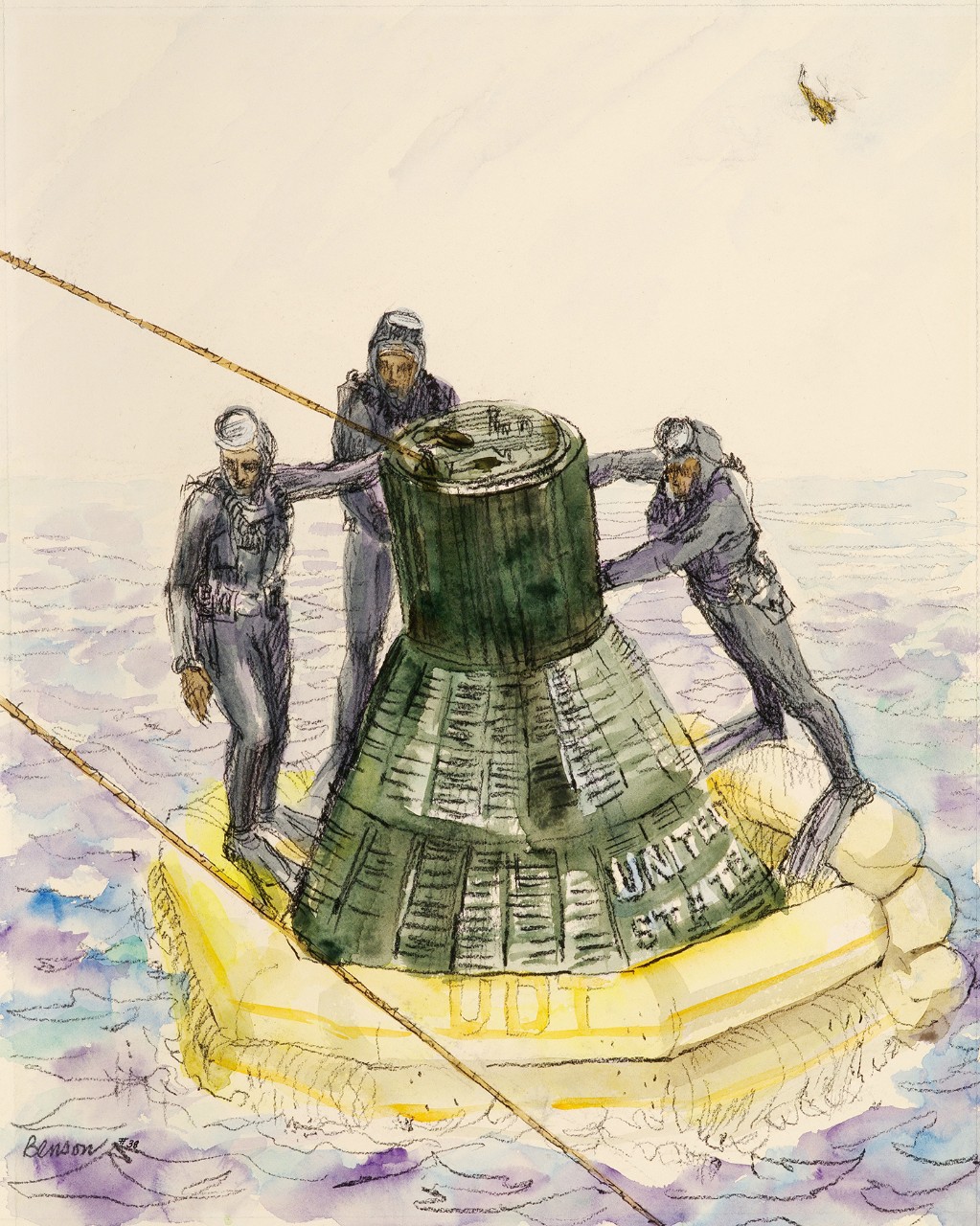 Paraswimmers of the U.S. Navy's Underwater Demolition Team (UDT) assist with a Mercury spacecraft after splashdown.  The UDT members role at this stage was critical for the Astronaut's survival in the open ocean as they had to secure the spacecraft and ensure the Astronaut's health was stable. 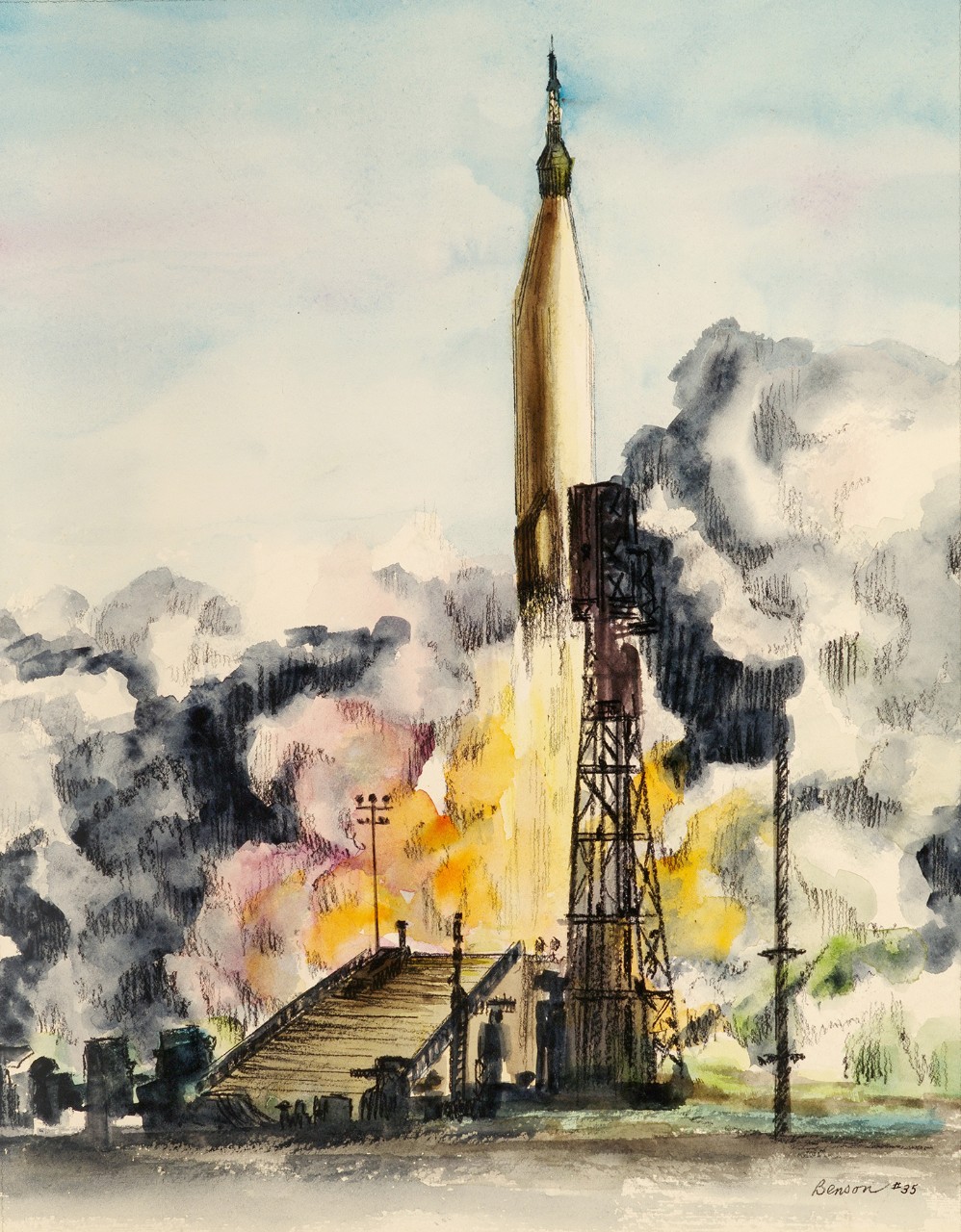 Project Mercury used two different types of rockets to launch the seven Astronauts in Outer Space:  Juno and Atlas.  This painting portrays the 1963 Mercury-Atlas 8 mission with Astronaut Gordon Cooper on board.  This mission was the last solo flight to take place. 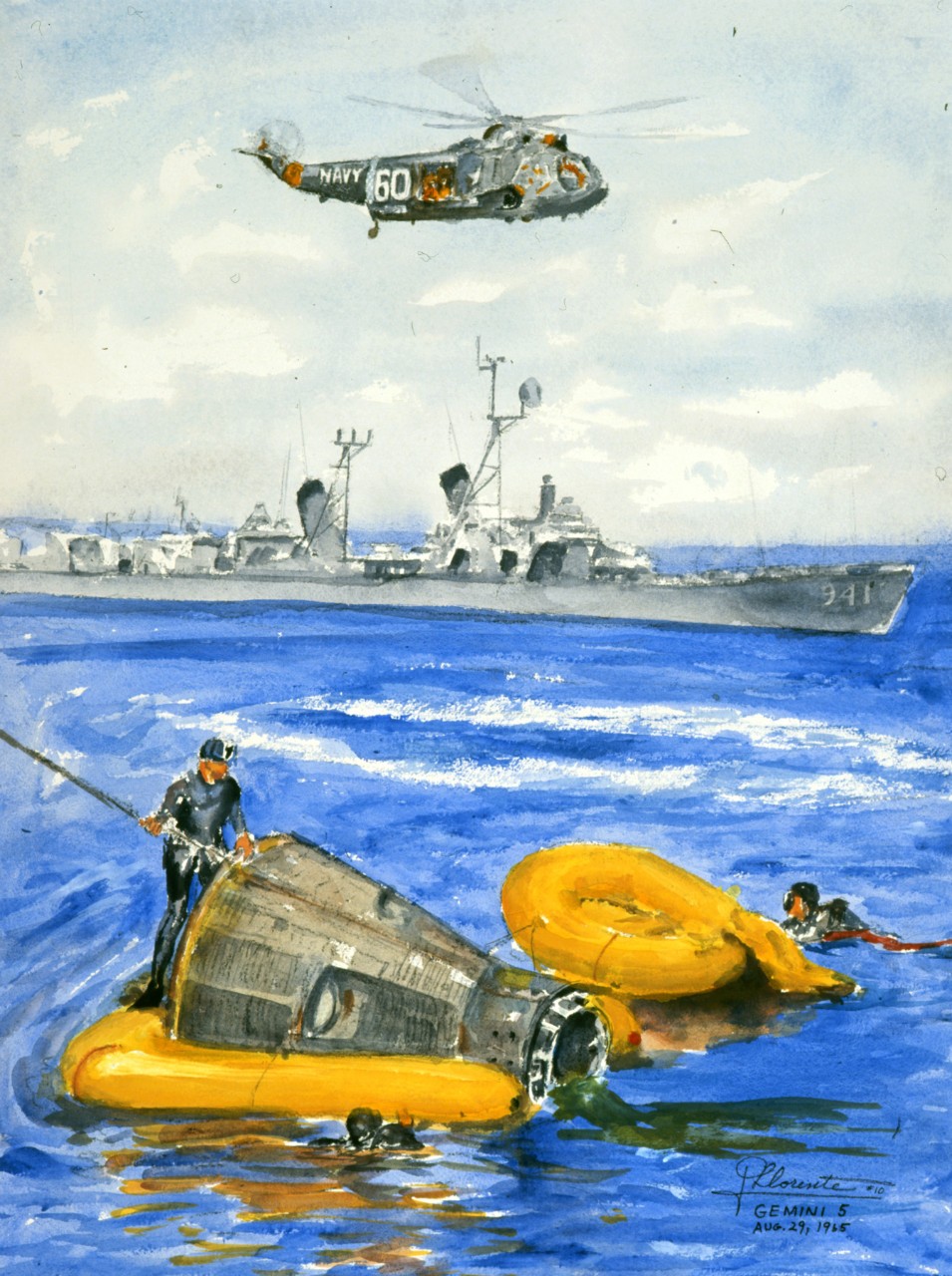 When an American spacecraft made its reentry, the U.S. Navy mobilized a carrier task force to retrieve it.  Shown here is the destroyer USS DuPont (DD-941), a helicopter from the aircraft carrier USS Lake Champlain (CV-39), adn UDT paraswimmers attaching the flotation device to Gemini V and retrieving Astronauts Gordon Cooper and Pete Conrad. 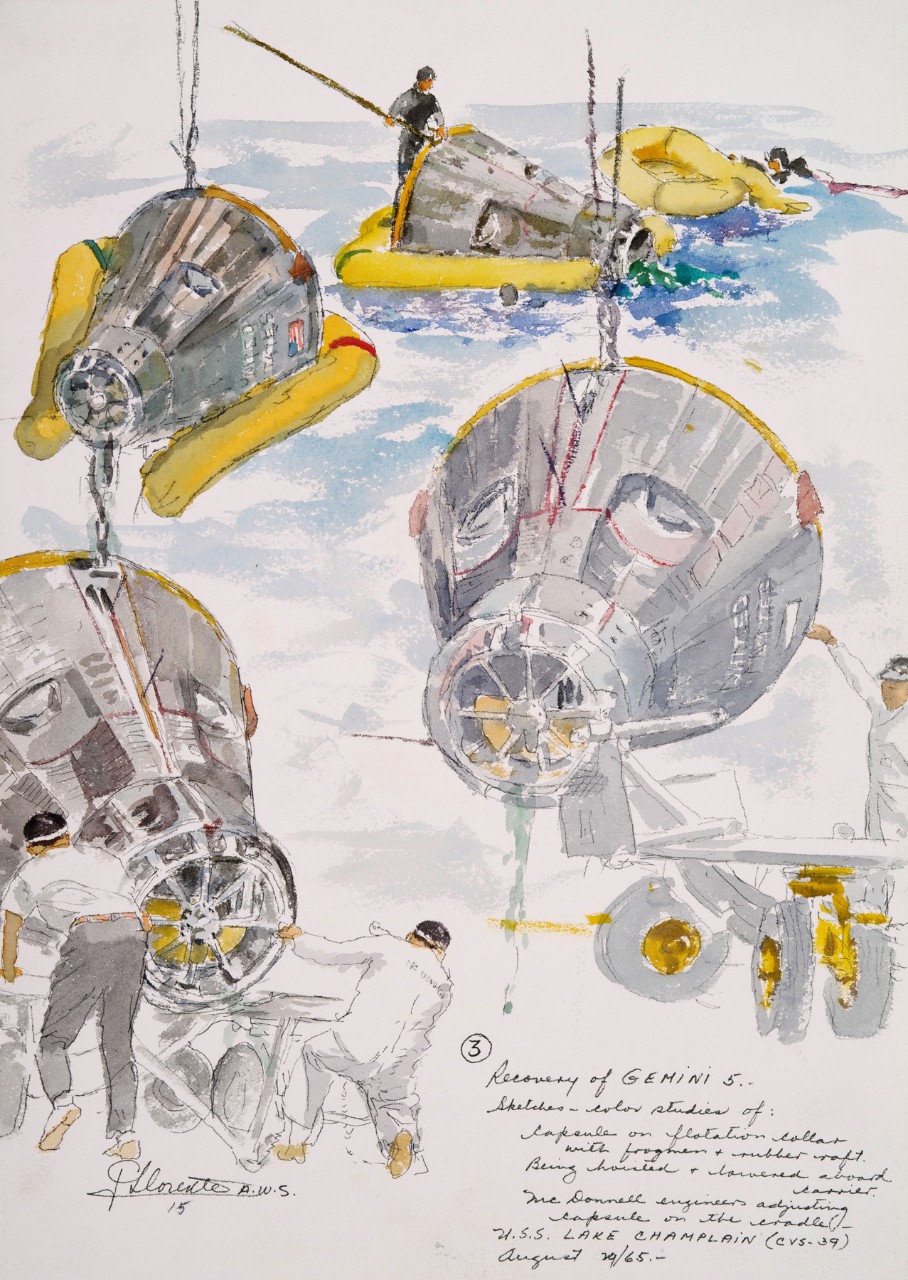 These sketches show the retrieval method of Gemini V by members of the Underwater Demolition Team (UDT) and Lake Champlain's deck department.  Engineers designed the capsule to float on its own, but not for extended periods of time.   The flotation gear helped stablize the craft while the UDT swimmers assisted the Astronauts. 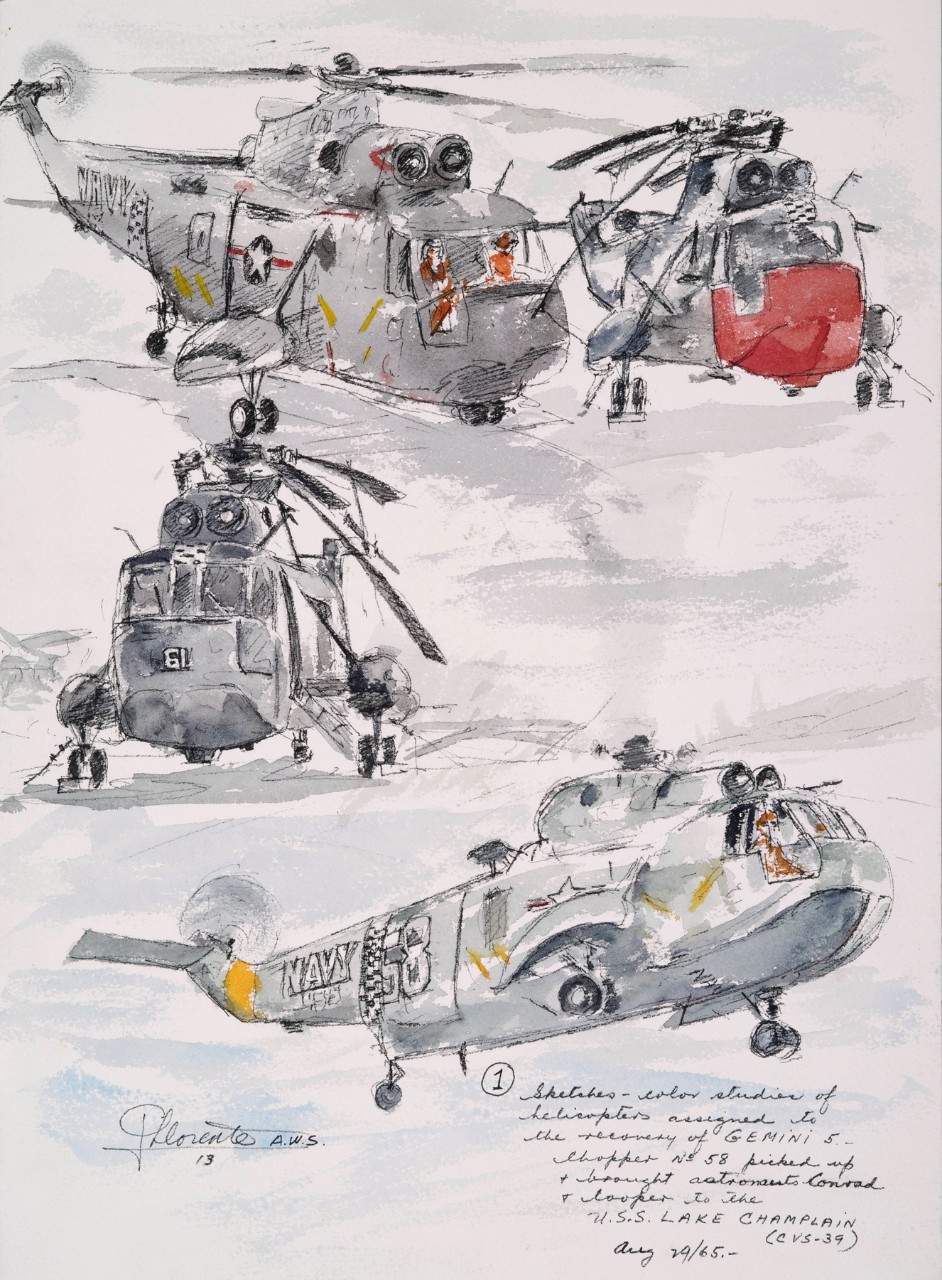 This image shows an artist's study of Navy Helicopter Number 58, a SH-3 "Sea King" helicopter assigned to USS Lake Champlain (CV-39) that retrieved many of the Gemini Astronauts from the water.   The red colored paint on the front of the aircraft identifies it as a search and rescue helicopter. 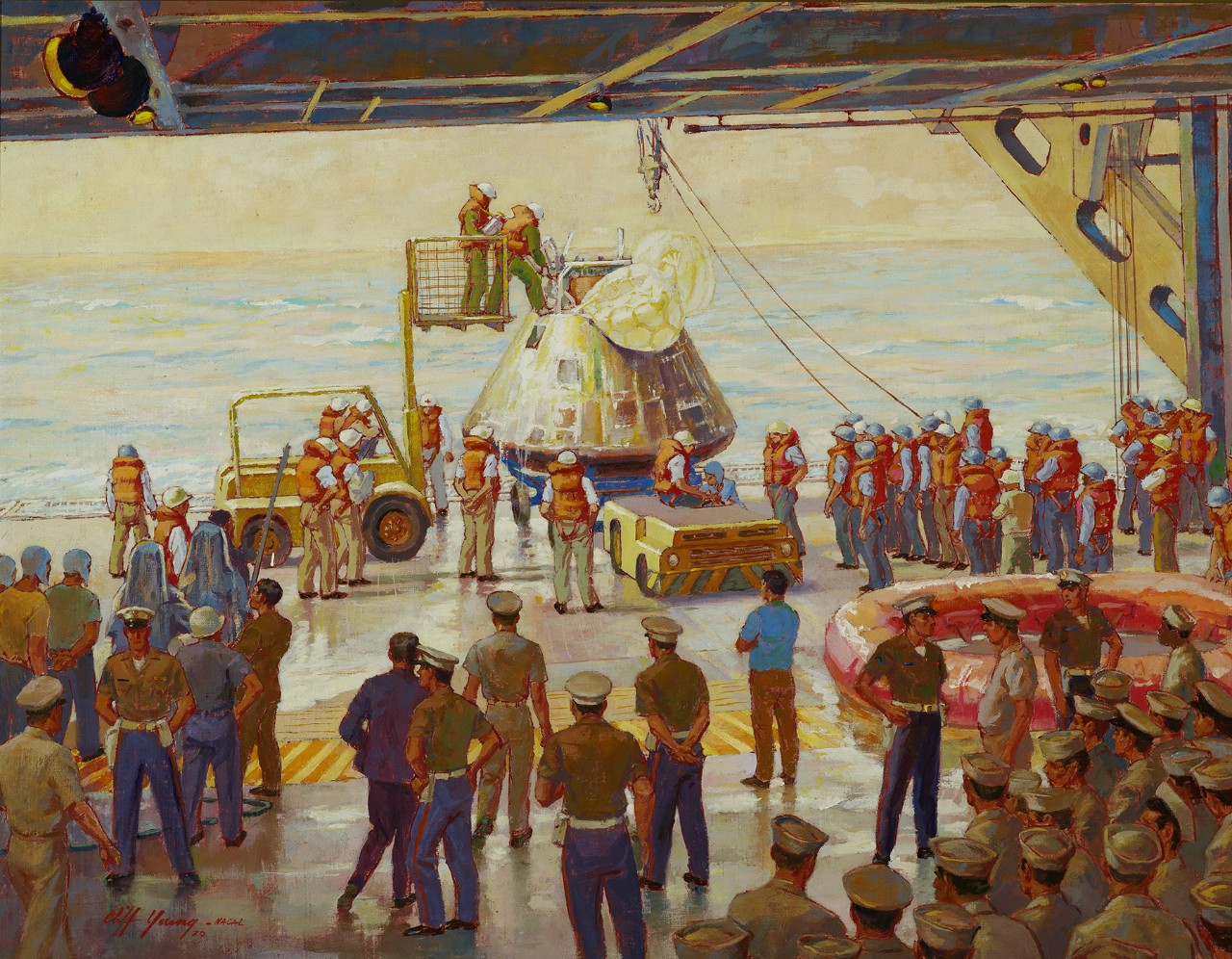 With hundreds of onlookers watching as if visitors from another planet were about to make first contact, the deck team of USS Hornet (CV-12) carefully brings the Command Module of Apollo 11 on to the hanger deck. 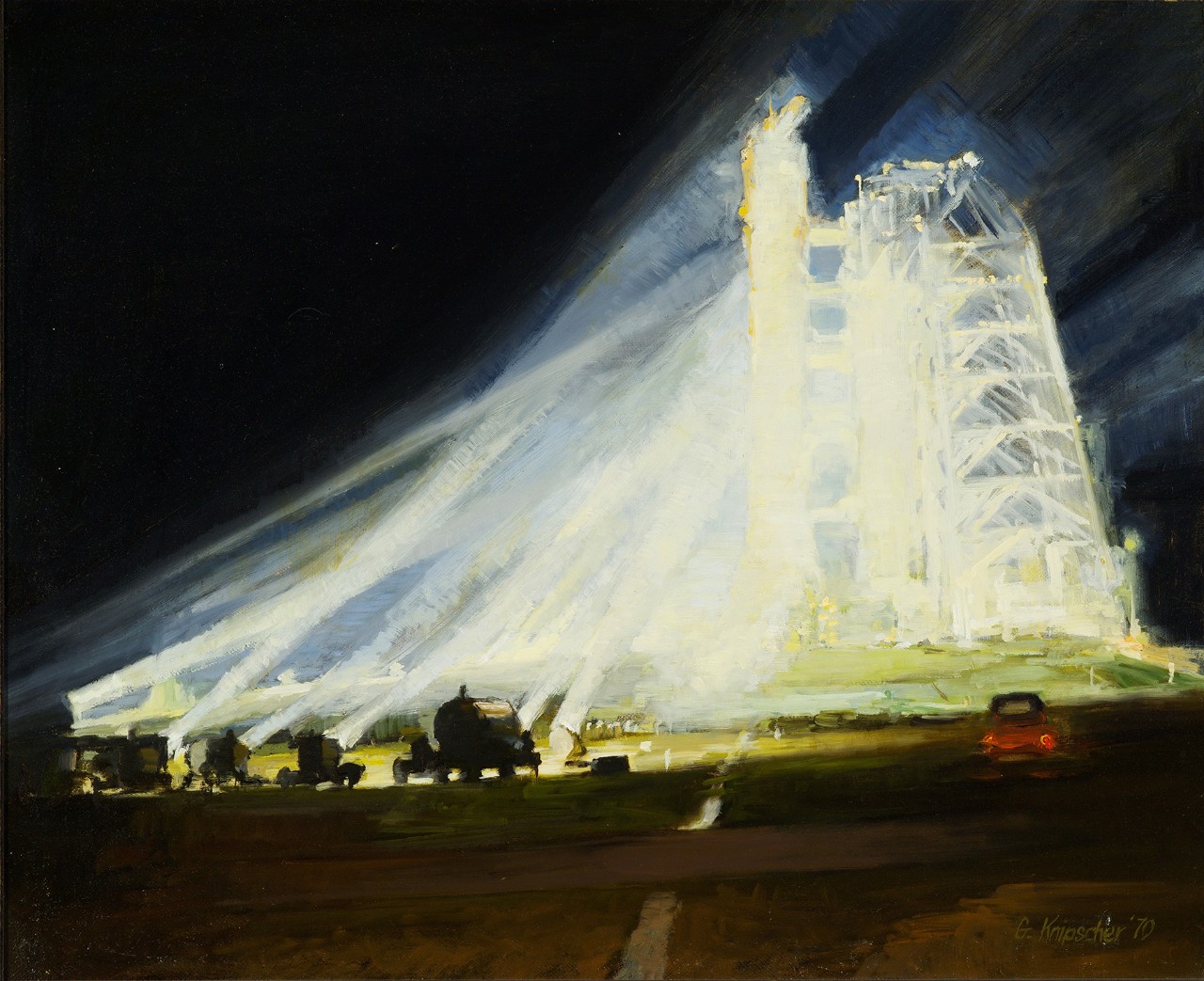 Spotlights illuminate the Saturn V rocket carrying the all-Navy crew of Apollo 12, just a few hours before launch.  The weather on launch day was not ideal and almost caused Mission Control to scrub (cancel) the launch. 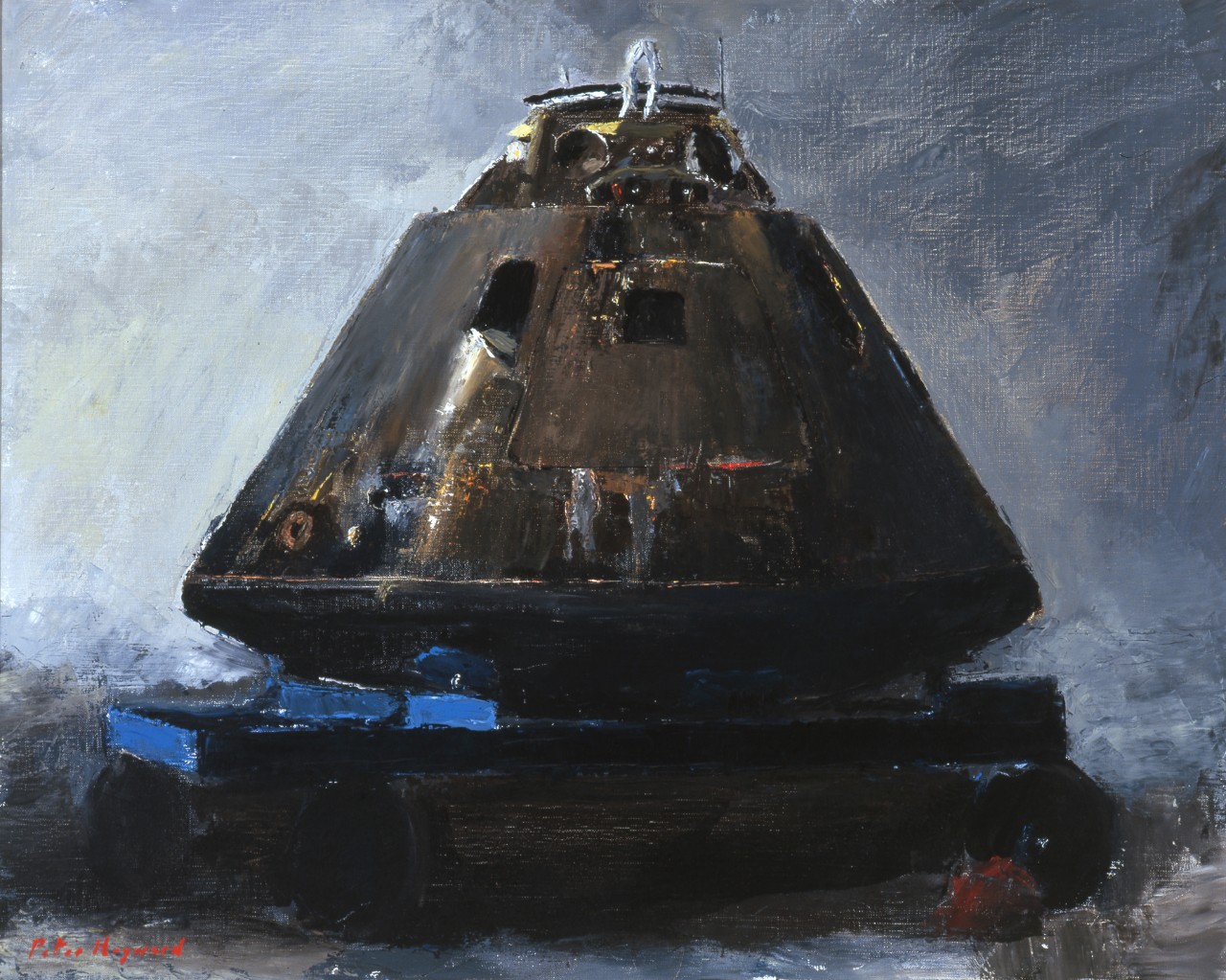 Apollo 13's Command Module Odyssey sits quietly on a dolly on board the hangar deck of USS Iwo Jima (LPH-2).  The quiet moment portrayed by the artist stands in stark contrast to the high drama of Apollo 13's mission and rescue. 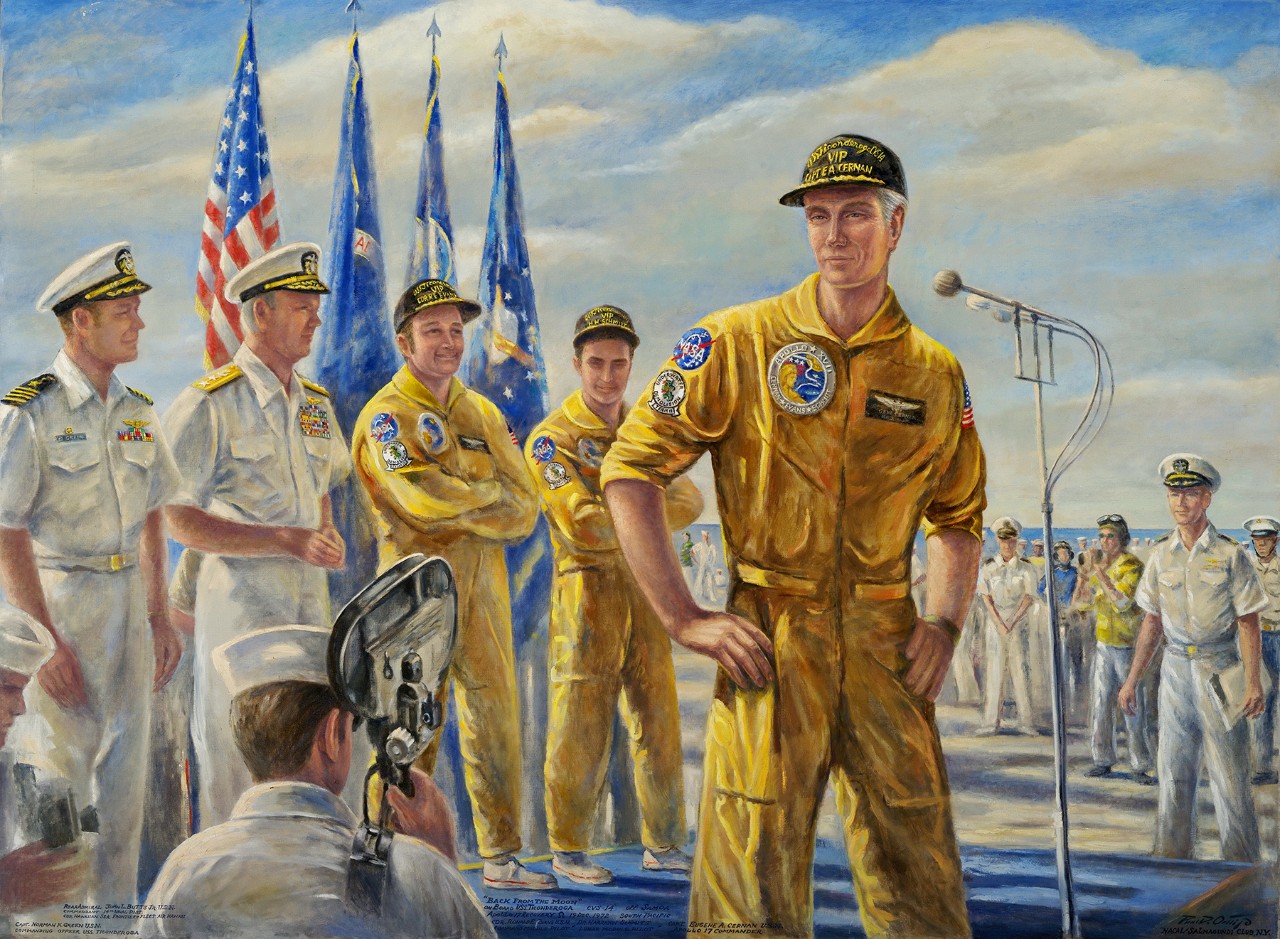 Shown here are Naval Aviators/Astronauts Eugene Cernan and Ronald Evans, and Geologist/Astronaut Harrison Schmidt of Apollo 17 aboard the recovery ship USS Ticonderoga (CV-14).  The sketch artist in the lower right hand corner is Paul Ortlip, the painter of this work.   Due to budget cuts, Apollo 17 was the last manned mission to the Moon.   Before leaving the Moon, Cernan remarked to Mission Control "as we leave the Moon at Taurus-Littrow, we leave as we came and, God willing, as we return, with peace and hope for all Mankind."