While the National Aeronautical and Space Adinistration (NASA) managed the American space program, its leaders recognized early on that it needed America's Armed Forces to achieve those goals.  The United States Navy possessed the knowledge and skills needed to train and equip a person to survive in outerr space.

"The utilization of space truly has been a national effort; the talents of the military servcies hae been invaluable through the years.  The United States Navy has played a particularly important part in the development and final realization of that enterprise."  - Astronaut Rear Admiral Alan Shepard, USN. 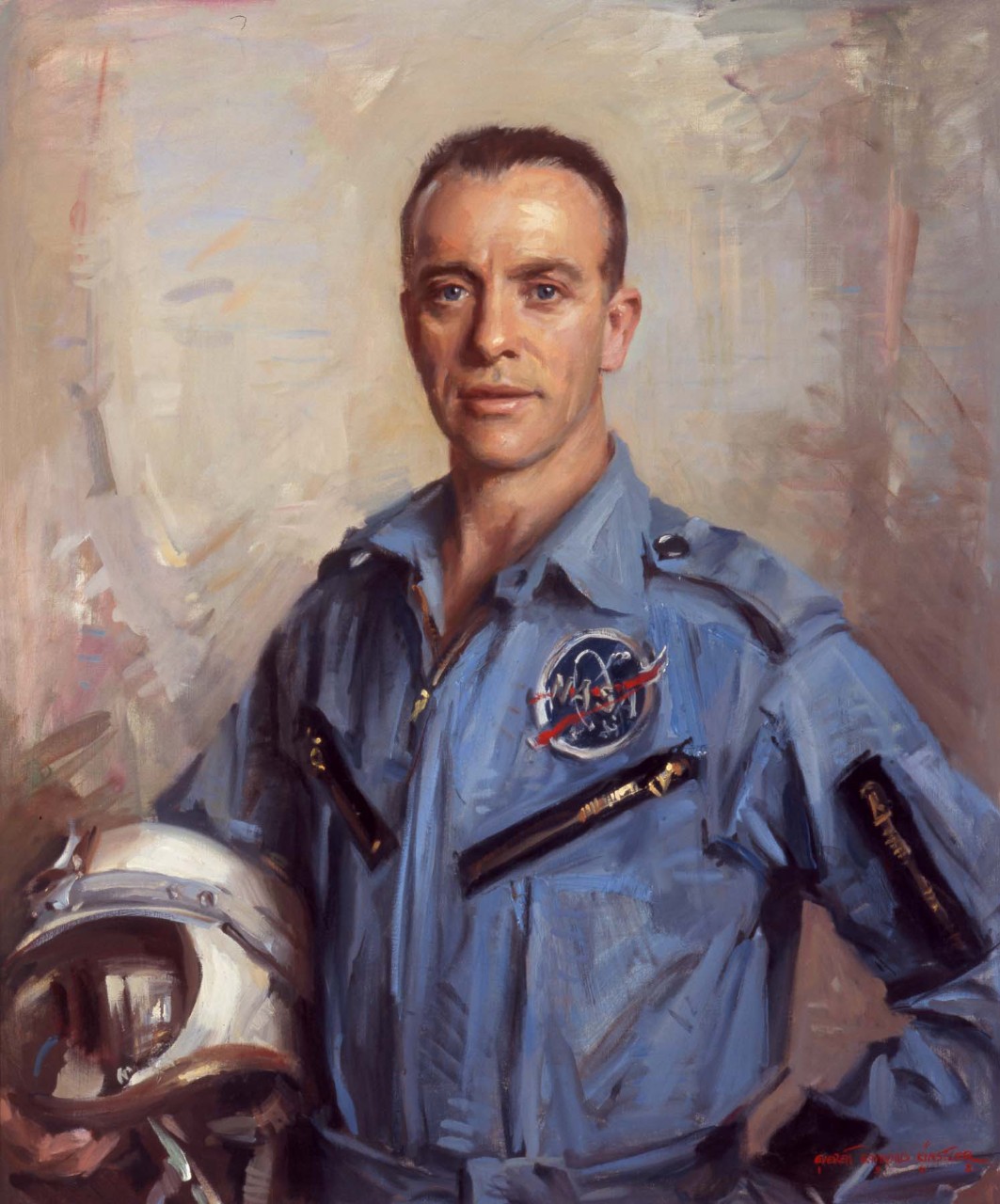 In 1959, Alan Shepard became America's first man into outer space when he piloted the Mercury space capsule Freedom 7 to a sub-orbital flight.   A 1944 graduate of the United States Naval Academy, Shepard served on the destroyer USS Cogswell (DD-651) in World War II and then as a U.S. Navy test pilot.  He later commanded Apollo 14 and walked on the Moon in 1971. 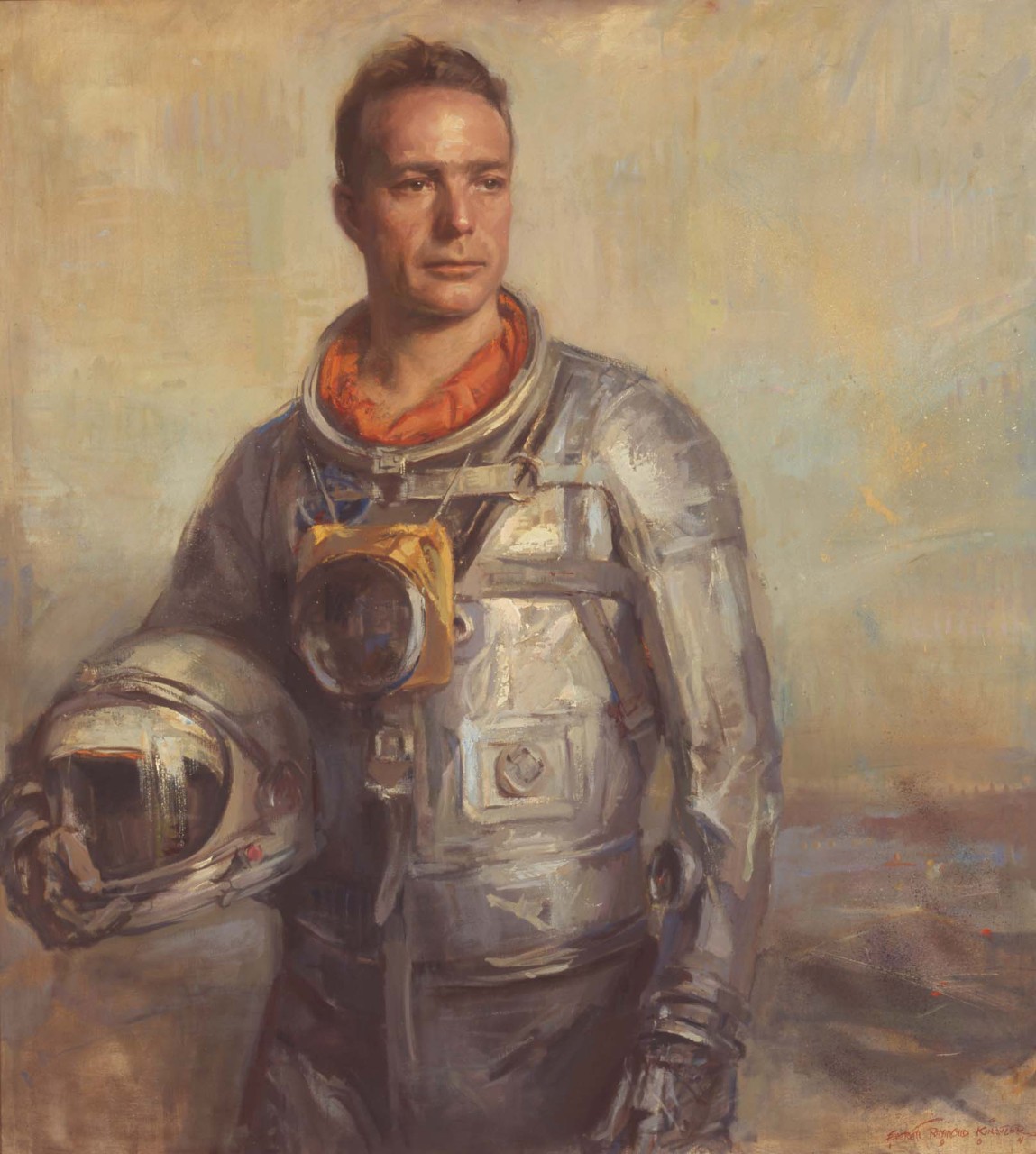 Commander Malcom Scott Carpenter was the fourth American astronaut into space.  A Naval Aviator by training and a Korean War veteran, he piloted the Mercury space capsule Aurora 7 three times around the Earth on May 24, 1962.   Carpenter left NASA in 1965 to work with the Navy's SEALAB II undersea project. 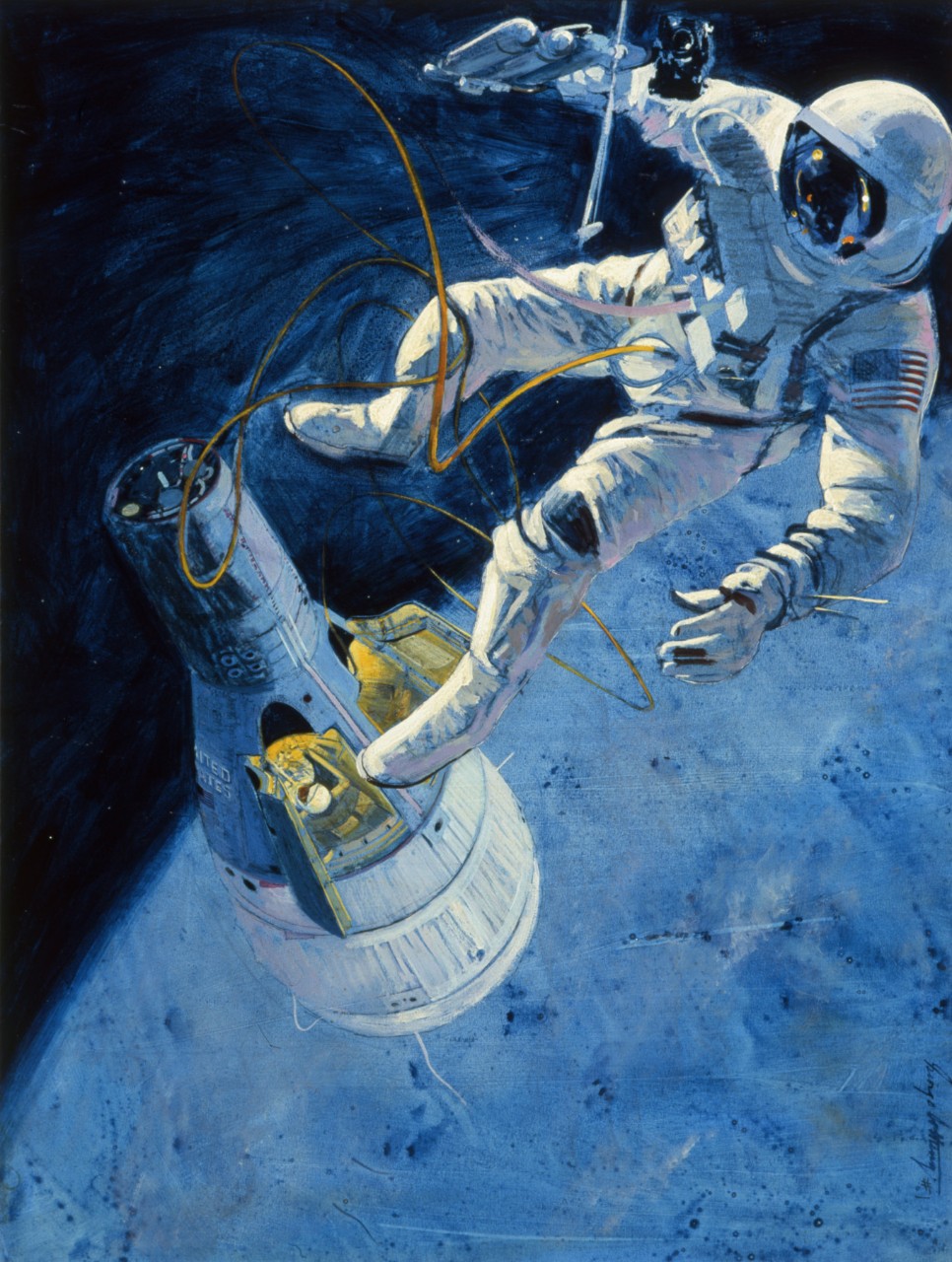 Astronaut Edward White conducted the first American "space walk" when he left Gemini IV and free-floated in outer space for twenty minutes.   NASA conducted early on in the space program that it needed experienced aviators, both Navy and Air Force, to serve as Astronauts.  White tragically died in a launch pad fire aboard Apollo 1.  NASA posthumously awarded him the Congressional Space Medal of Honor. 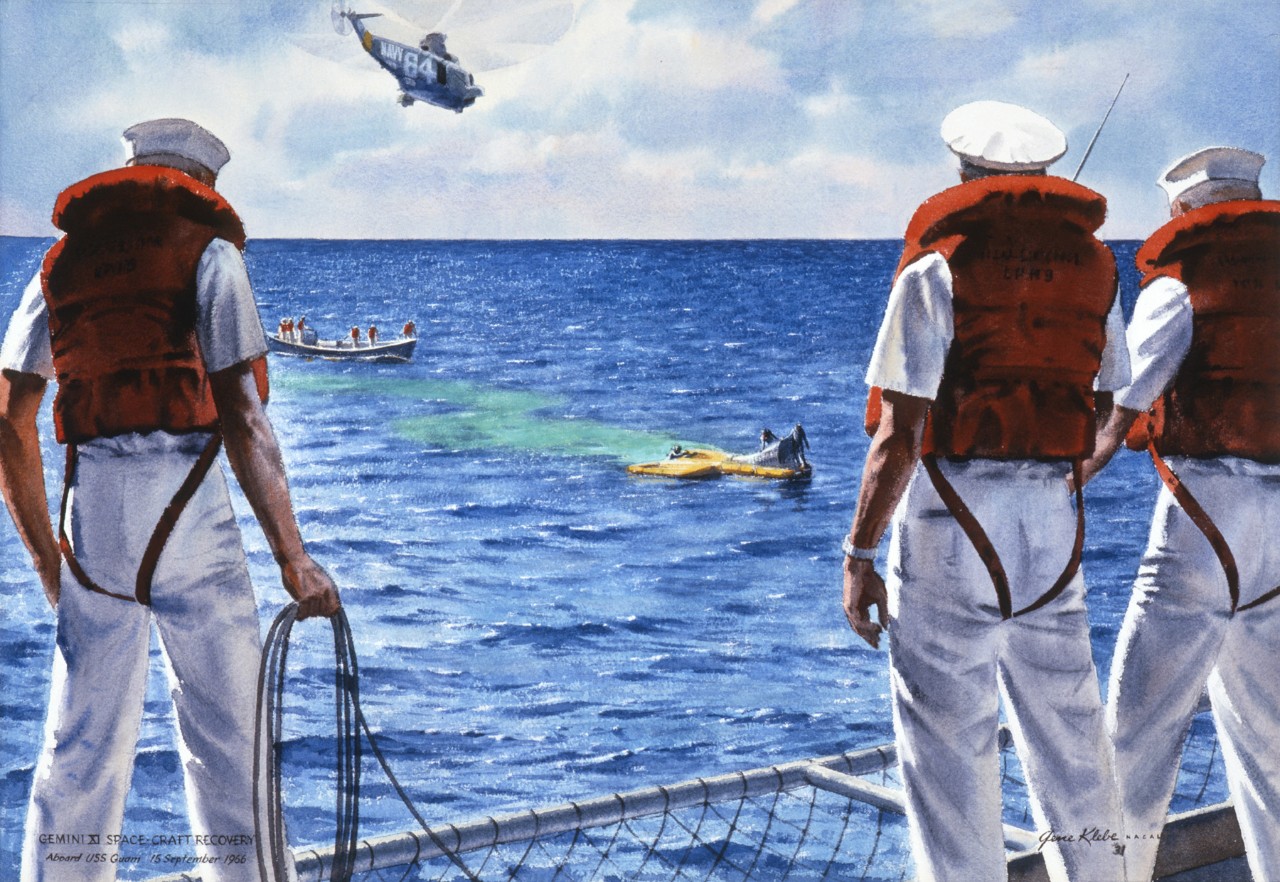 Sailors from USS Guam (LPH-9) prepare to receive the Gemini XI from the recovery team.  Before picking up the real capsule, Sailors conducted several training exercises with a "boilerplate" capsule to learn how to properly retrieve it. 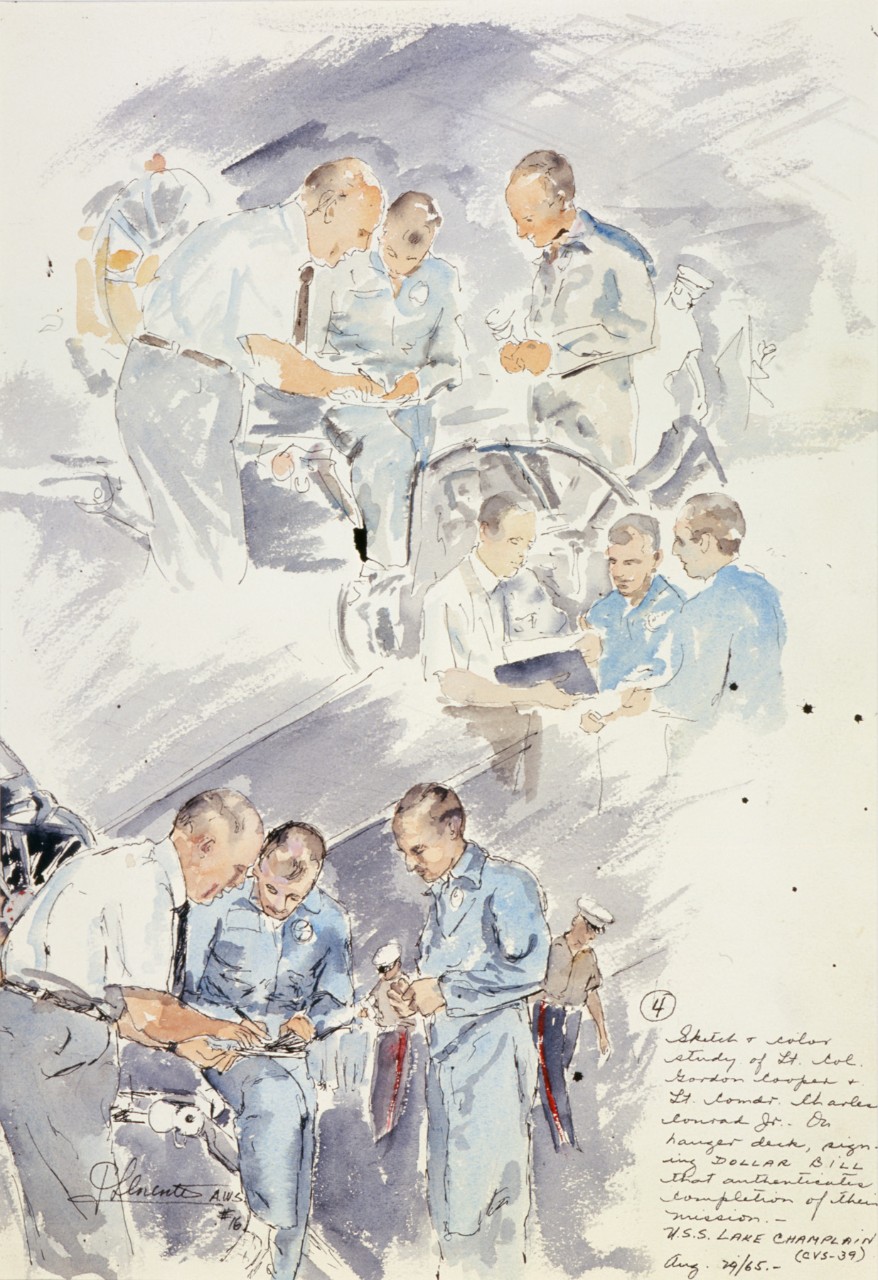 Astronauts Gordon Cooper and Pete Conrad are signing a dollar bill that authenicates completion of their mission.  It is NASA tradition for the Astronauts to take a one-dollar bill into space, when then brought back to Earth, is signed by the crew as well as the National Aeronautical Association member who receives the bill when the Astronauts returned home. 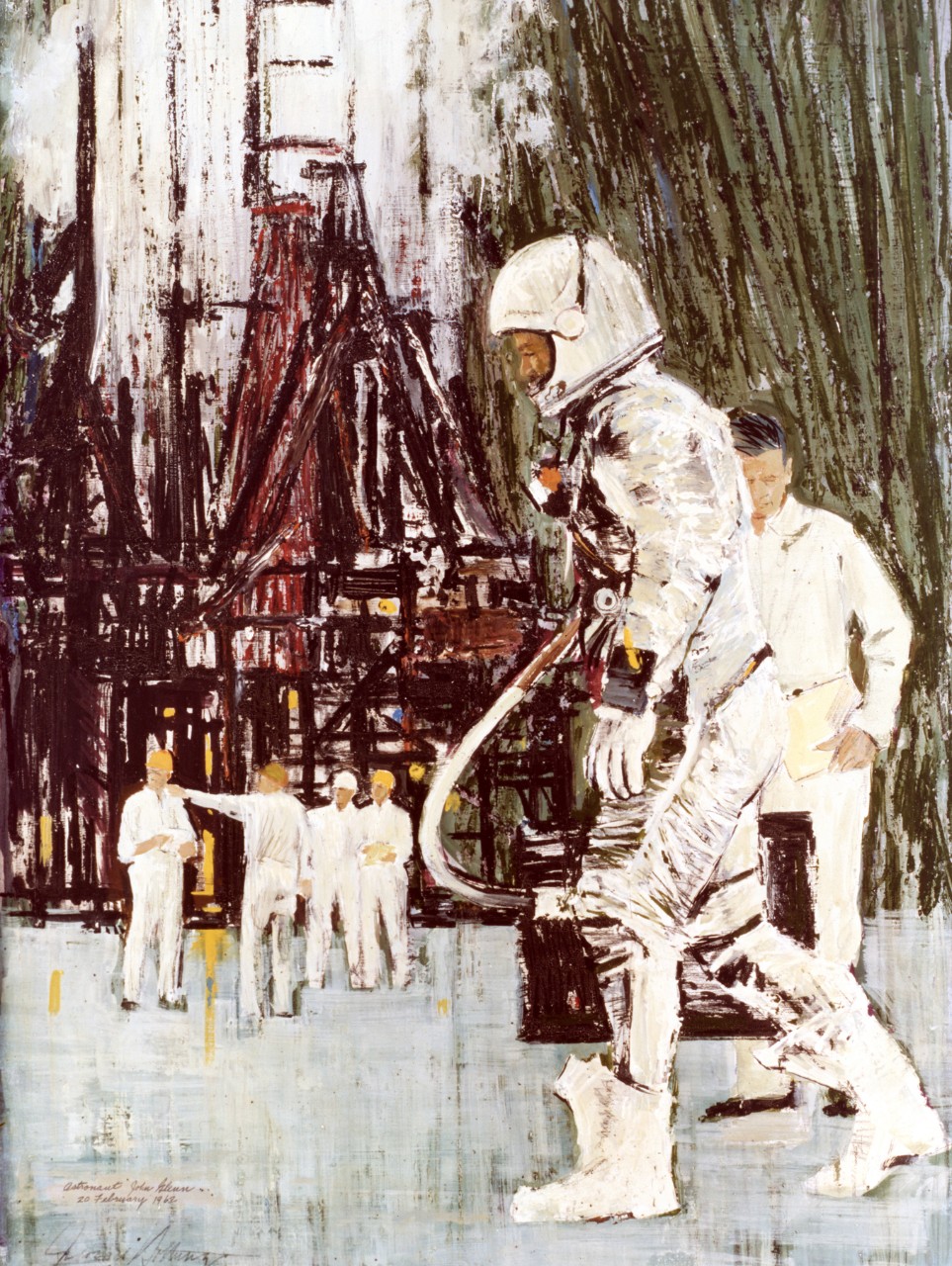 Mercury Astronaut and Marine Corps Aviator John Glenn is shown here walking towards an Atlas rocket.  His flight in the Mercury space capsule Friendship 7 was the first American flight around the Earth and reestablished the United States as a serious contender in the Space Race.   As a U.S. Senator, Glenn would return to space in 1998 as a payload specialist aboard Space Shuttle Discovery on mission STS-95. 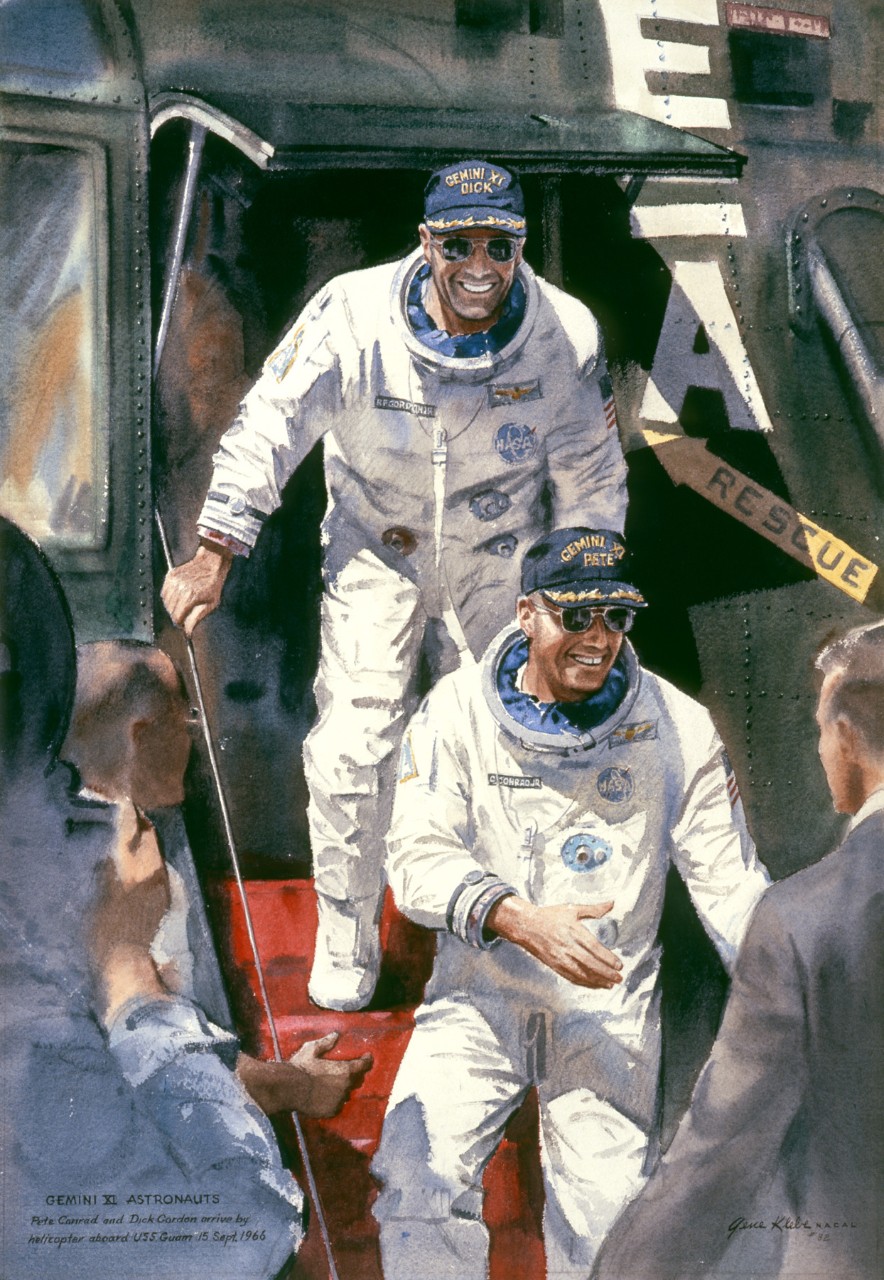 Astronauts Pete Conrad and Richard Gordon descended from a helicopter and on to the deck of USS Guam (LPH-9).  Each "splashdown" event was a major news event.   The Navy had to not only train for a successful recovery, but also had to successfully manage the onslaught of television and newspaper reporters that joined them at sea. 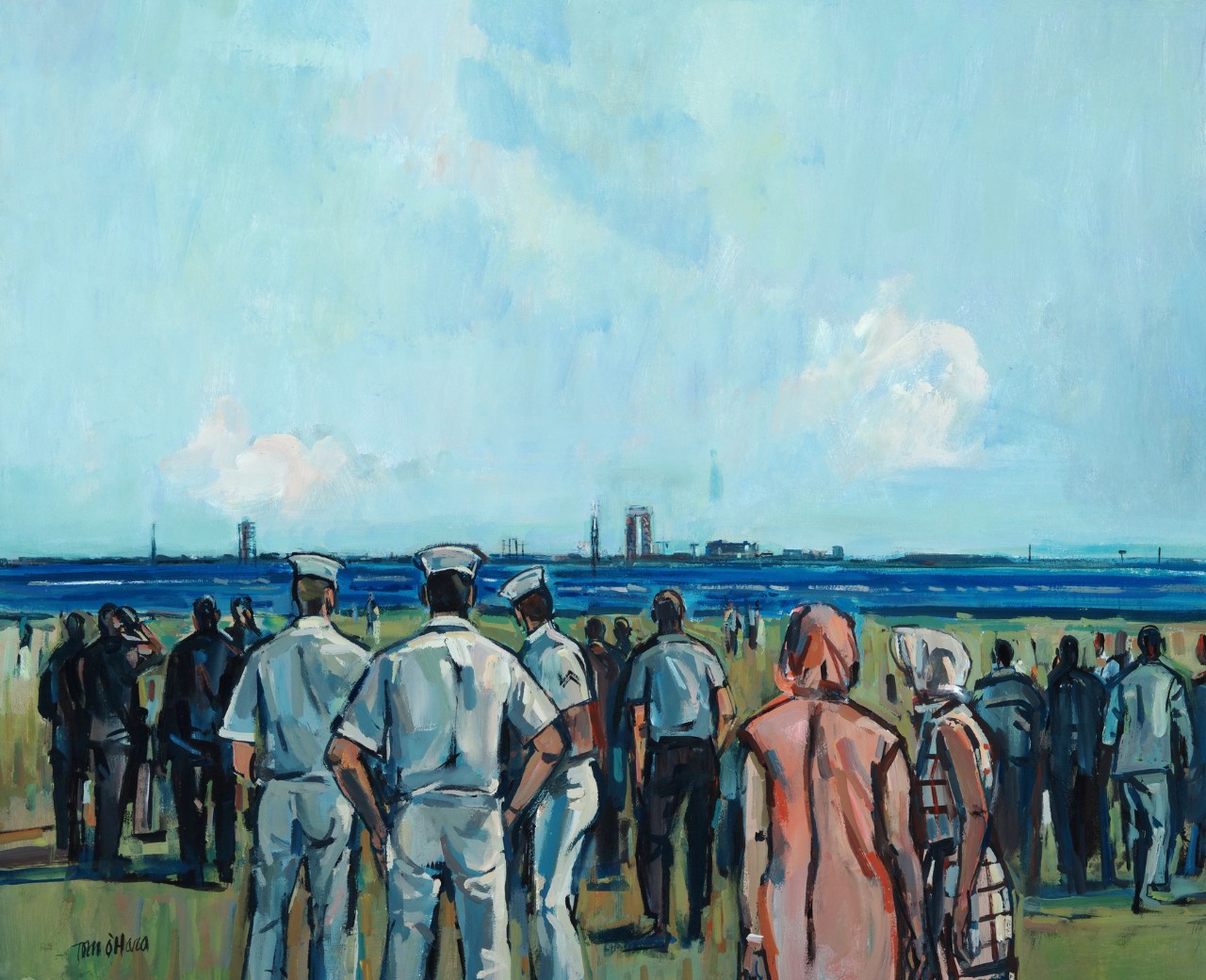 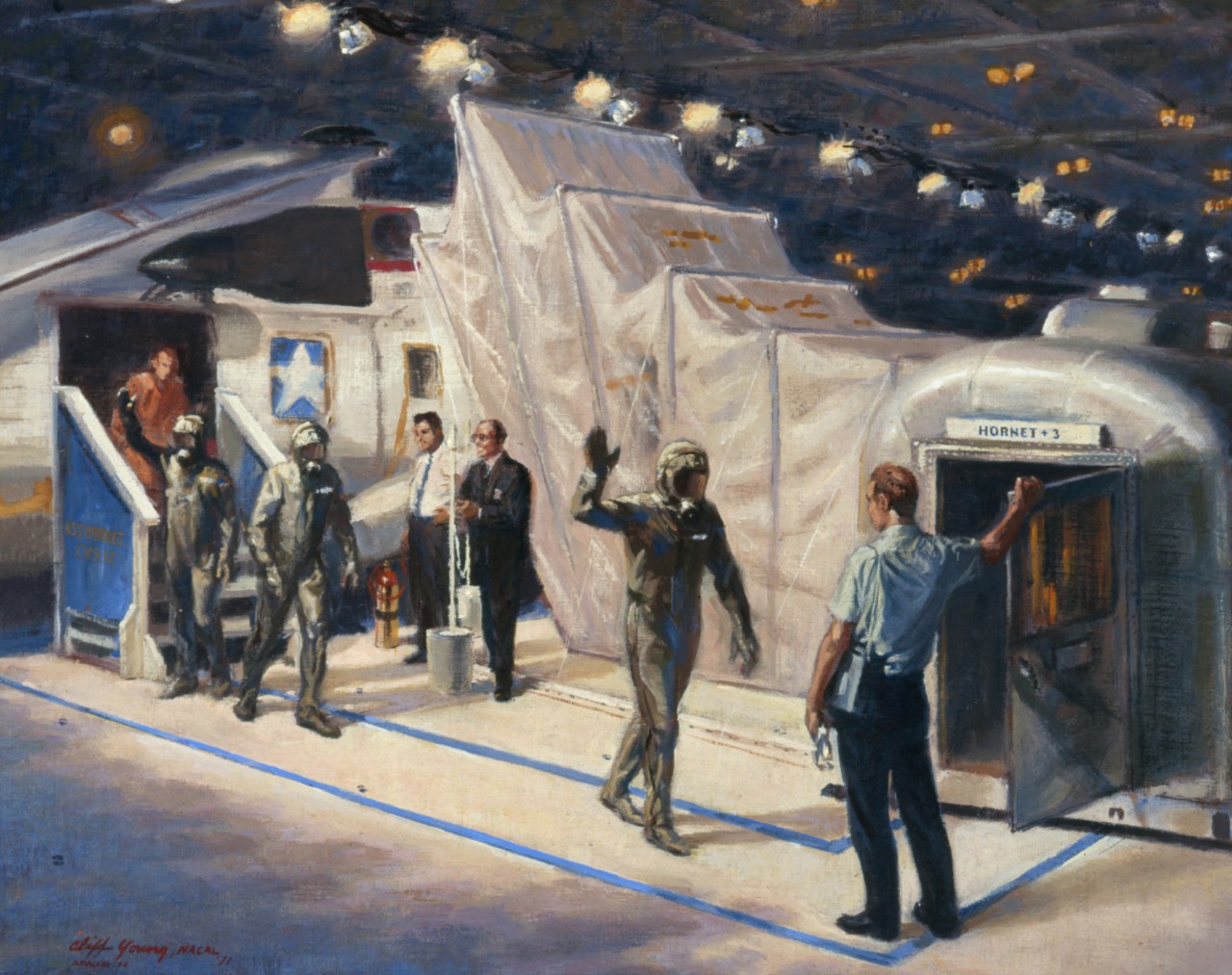 Painting, Acrylic on Board, Navy Art Collection, 88-163-AN

The Astronauts of Apollo 11, Neil Armstrong, Buzz Aldrin, and Michael Collins, descend from the helicopter and immediately head to the Mobile Quarantine Facility (MQF).  The Navy placed the converted Airstream trailer in the hanger deck of USS Hornet (CV-12) and it was used for Apollo 11, 12, and 14 missions.  NASA designed the MQF to alleviate concerns that the Astronauts would bring back alien germs from the Moon. 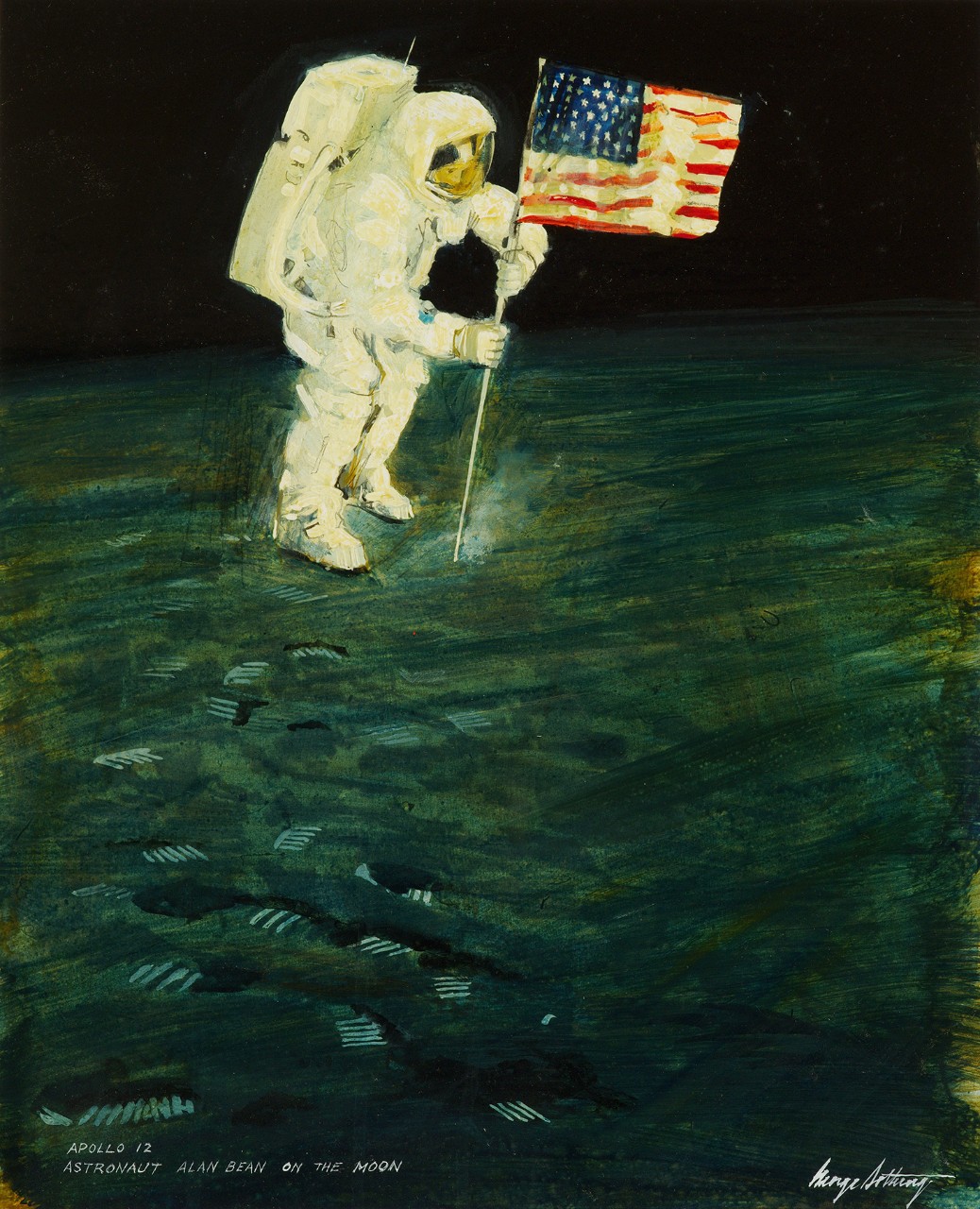 Naval Aviator and Astronaut Alan Bean plants the American flag during his walk on the Moon during the Apollo 12 mission.  Bean would later serve on the space station Skylab 2 in 1973 and as head of Astronaut training. 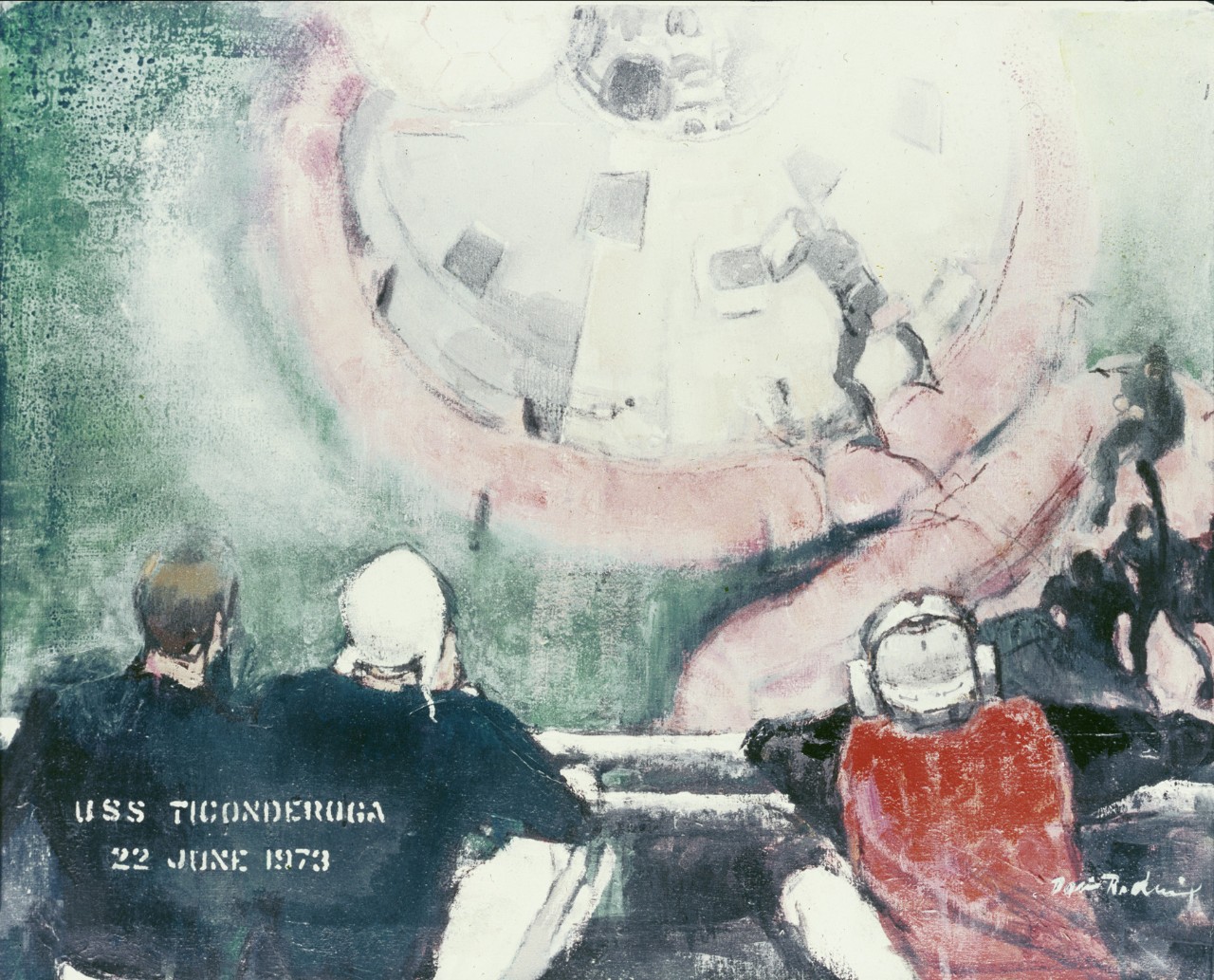 With curious onlookers from USS Ticonderoga (CV-14), Underwater Demolition Team (UDT) frogmen prepare to open the hatch to recover the Astronauts from Skylab I space station.  Naval Aviators Pete Conrad and Paul Weitz and Naval flight surgeon Joseph Kerwin were in remarkably good shape given they had been in space for twenty-eight days (a record at the time) and suffered through several life support malfunctions. 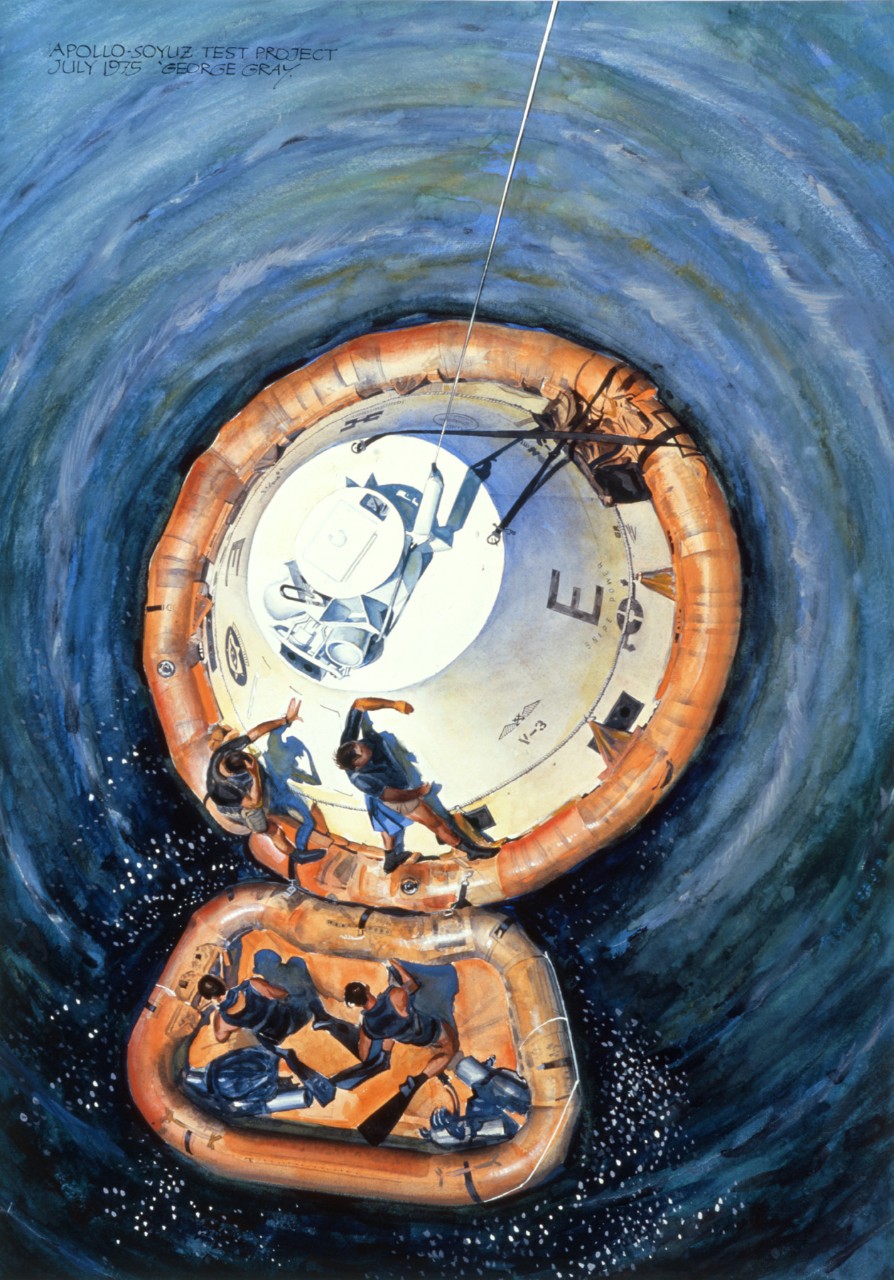 Frogmen from USS New Orleans (LPH-11) work with a boiler plate model in preparation for recovering the Apollo-Soyuz Test Project.   This mission signaled the end of the Space Race as Astronauts and Soviet Cosmonauts shook hands across a docking ring while their space crafts orbitted the Earth.   It also meant the end of "Splashdown USA" as the project was the last Apollo mission.