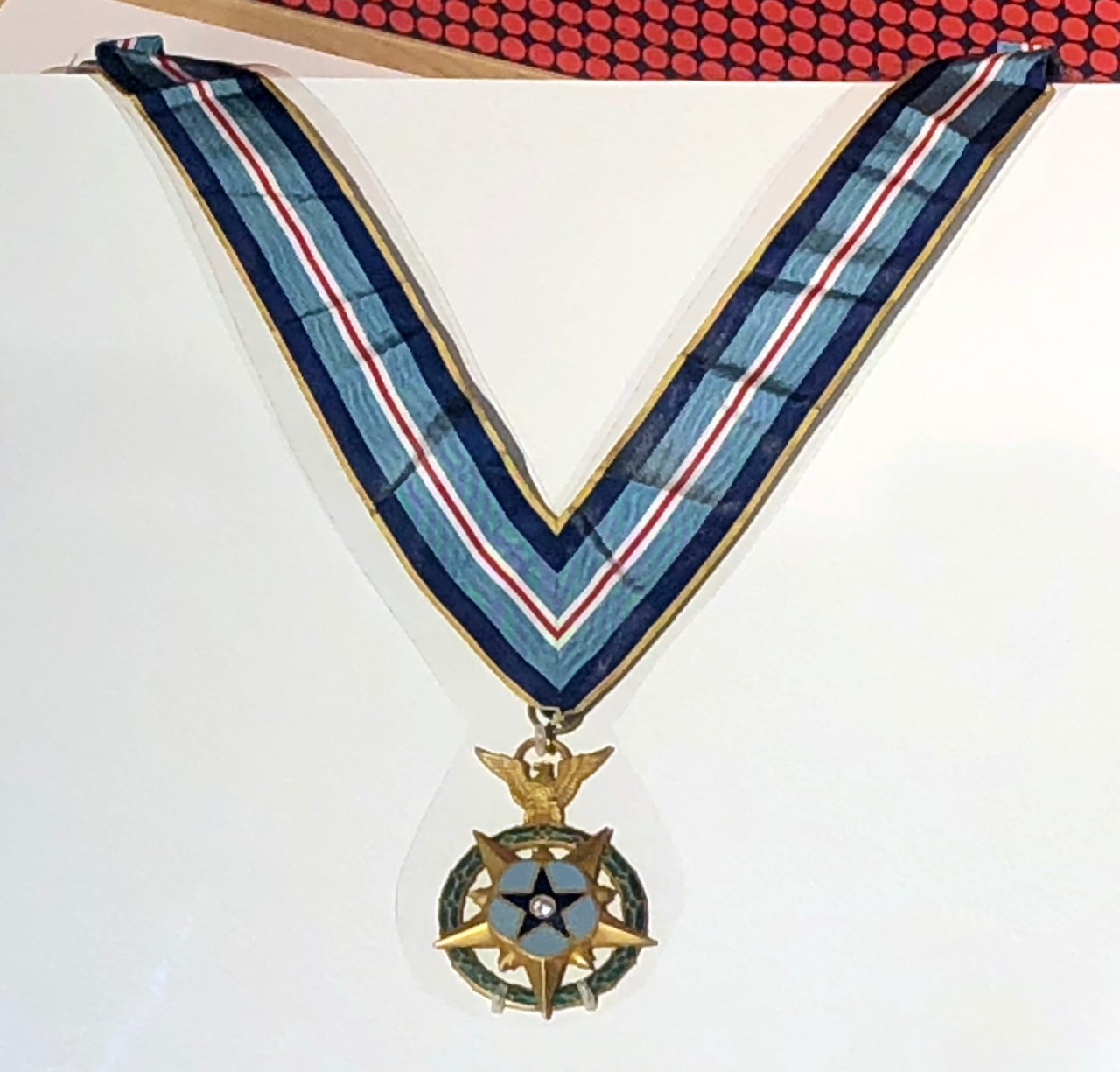 Medals like this one, were awarded to Astronauts that performed extraordinary performance during space flight.   The President of the United States awards the medal in Congress' name and upon a recommendation of he Administrator of NASA.  Five different presidents have awarded twenty-eight medals, seventeen of them posthumously.  The medal is a green enamel wreath of laurel, with a five-pointed gold-plated copper alloy star, with five other staggered protrusions, a light blue enamel cloud, a dark blue enamel five-pointed star, and a .25 karat diamond in the center.   There is symbolism with the medal where the laurel wreath represents great achievement and the star poins simulating space vehicles moving through space.   The other protrusions represent flames for the dynamic emergy of the rocket era and the imagination of the men in the space program of the United States.  The enamel cloud alludes to the high esteem of the award.   The dark blue star symbolizes the vast mysteries of space, and the diamond is the brilliance within the universe.

The eagle with raised wings is above the medal and in essence clutching the wreath representing man's first landing on another planet.  The ribbon 1 3/8 inches wide with stripes of gold, dark blue, light blue, white and red.  The red is the courage of the Astronaut corps shooting through the white air, reaching into the light blue of he Earth's atmosphere, and continuing into the dark blue vastness of space, reaching the gold line of accomplishment and success. 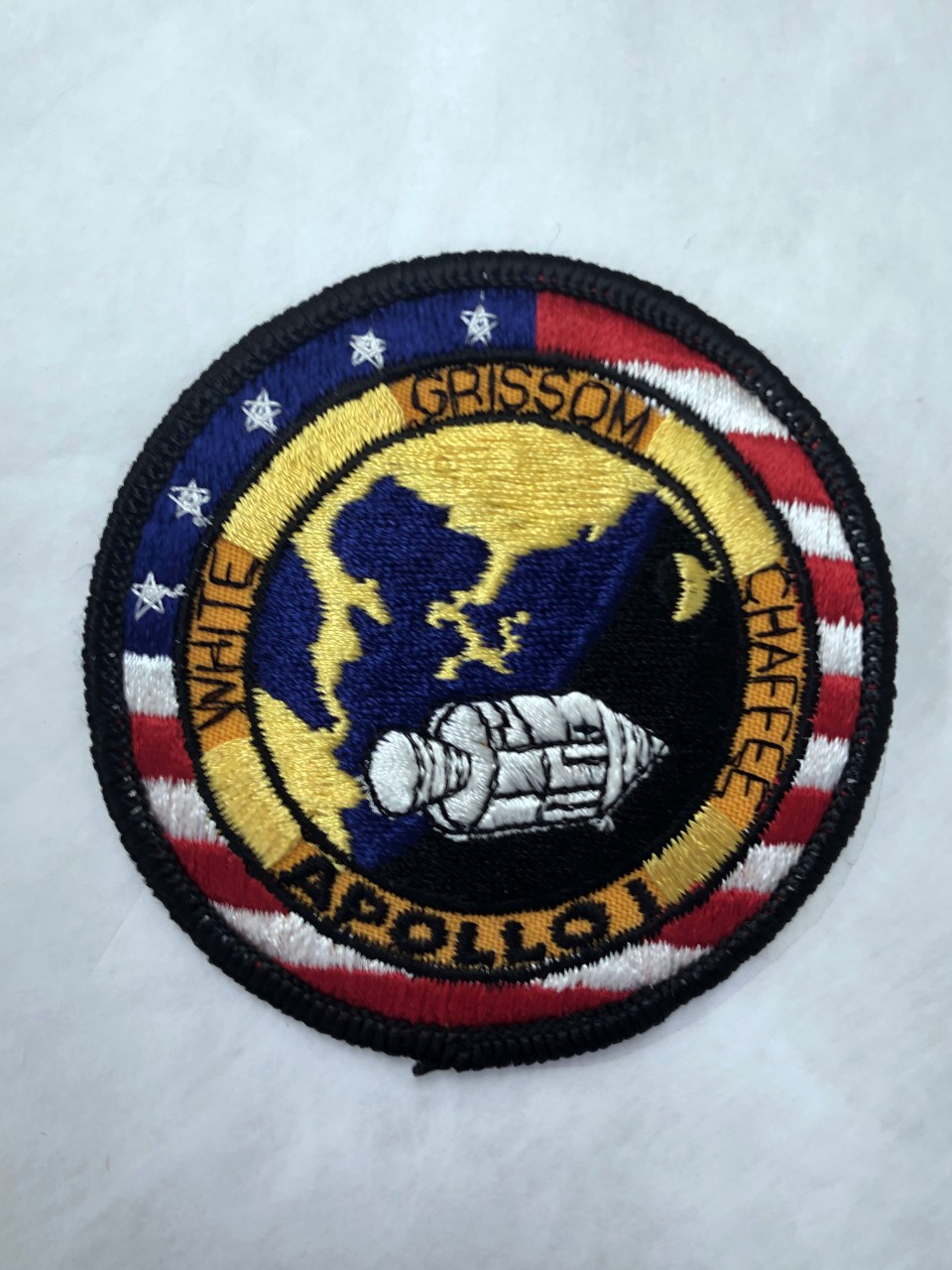 This mission patch is 2.5" in diameter with an American flag as the background with an interior band of gold with black lettering of the surnames of each astronaut, "WHITE/GRISOM/CHAFFEE."  Inside is the Earth, the Moon in the background, and the Apollo Command Module in the foreground.   Designed by Allen Stevens, an employee of North American Rockwell, a contractor of the Apollo space program.  NASA never officially approved the patch before the incident.  NASA labeled the mission AS-204 and informed the artist to not utilize Apollo 1 in the design.   Nevertheless, all three Astronauts affixed this patch to their uniforms.  NASA mandated that after the fire onboard all future patches be made from beta cloth.  They also stuck with the Apollo 1 name to honor the crew.  The intention of Apollo 1 was to launch into low earth orbit and test the branc new Command and Service Module as one unit. 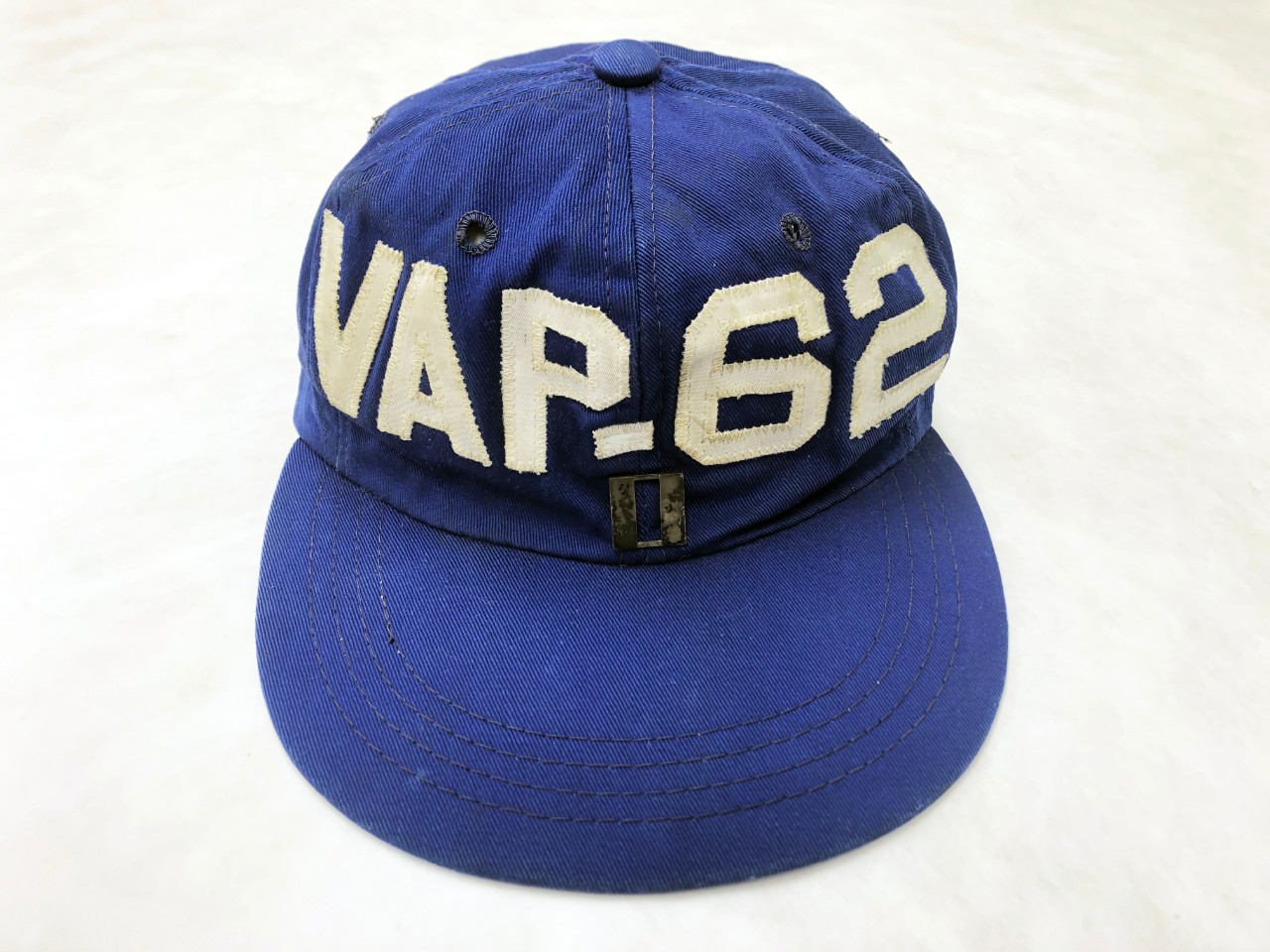 This baseball-style cap belongs to Lieutenant Roger Chaffee during his time as a Naval Aviator.  Before joining the Astronaut Corps, Chaffee served with Heavy Photographic Squadron 62 and piloted a A-3D "Skywarror" aircraft.   He flew eighty-two reconnaissance missions of Communist installations in Cuba.   The cap is royal blue cotton material with white block style letters and numbers, "VAP-62." This designation of Chaffee's squadron indicates aircraft (V), attack (A), patrol (P), and its appropriate number.   On the back is elastic for a snug fit around the wearer's head.  Underneath the lettering are two pinback bars representing Chaffee's rank as a Lieutenant.   He did not receive the rank of Lieutenant Commander until 1966.   This ballcap is a snapshot of his Navy career. 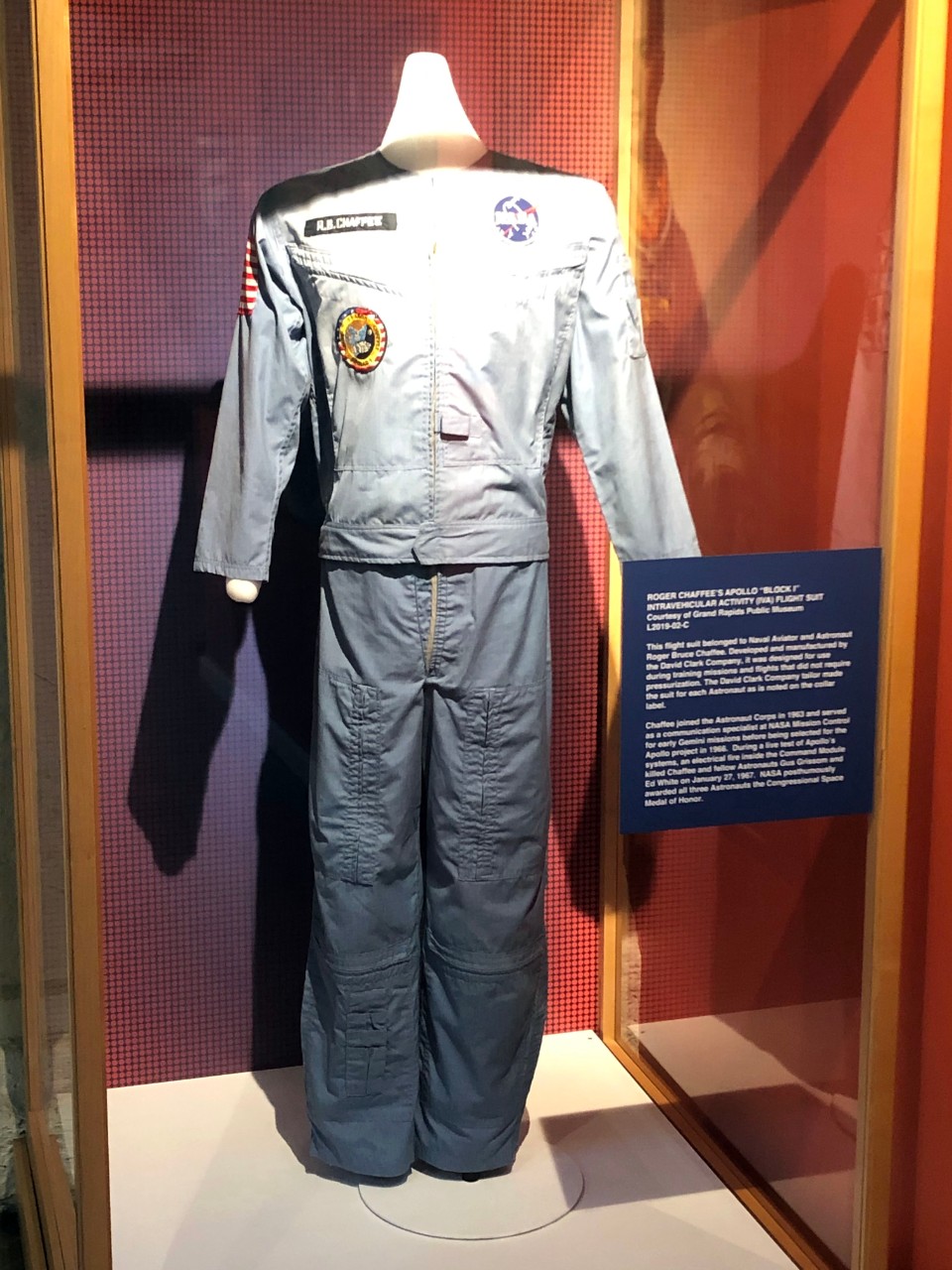 This flight suit belonged to Naval Aviator and Astronaut Roger Chafee.  These suits were developed for each astronaut, tailored, and manufactured by the David Clark Company.  This suit was used for training and activity within a command module space capsule that did not require pressurization.   Chaffee joined the Astronaut Corps in 1963.   He served as a communication specialist at Mission Control for the early Gemini missions and was selected for the Apollo Program in 1966.   During the live test of systems on January 27, 1967, an elecrical fire inside the Command Module of AS-204 killed Chaffee, Ed White, and Gus Grissom.

This jacket and trousers for the inflight coveralls were given to Chafee in 1966 for use.  The jacket includes the NASA insignia patch known as the "meatball" is sewn into the left breast, a black rectangular name bar patch with white lettering, "R.B. CHAFFEE" is sewn into the right breast, an insignia mission patch sewn below the name bar, and an American flag patch is sewn onto the right shoulder.   There is a pen pocket on the left shoulder.  There are multiple pockets on the left and right legs with a waist of thirty inches. 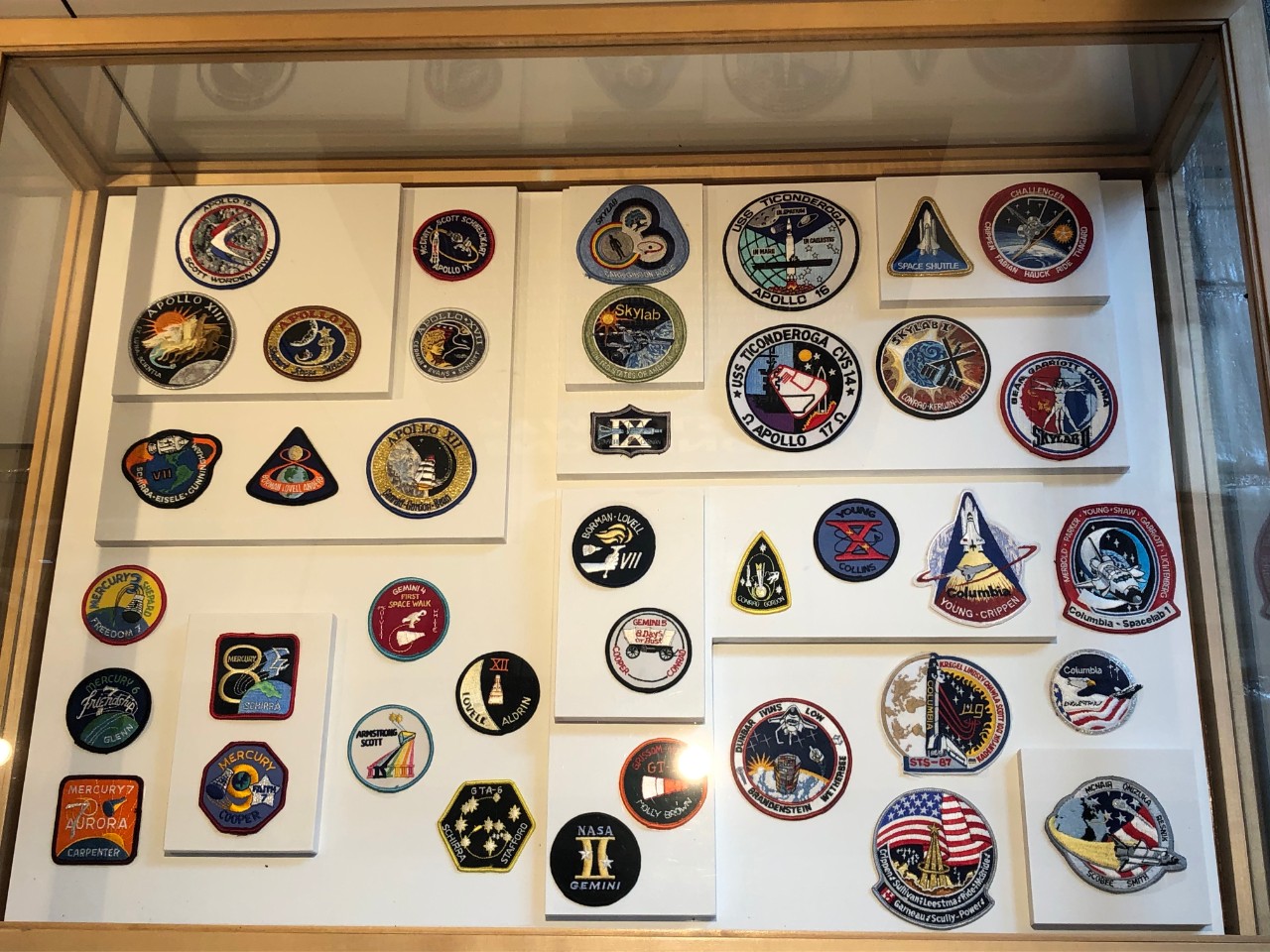 The patches are identified by mission names.