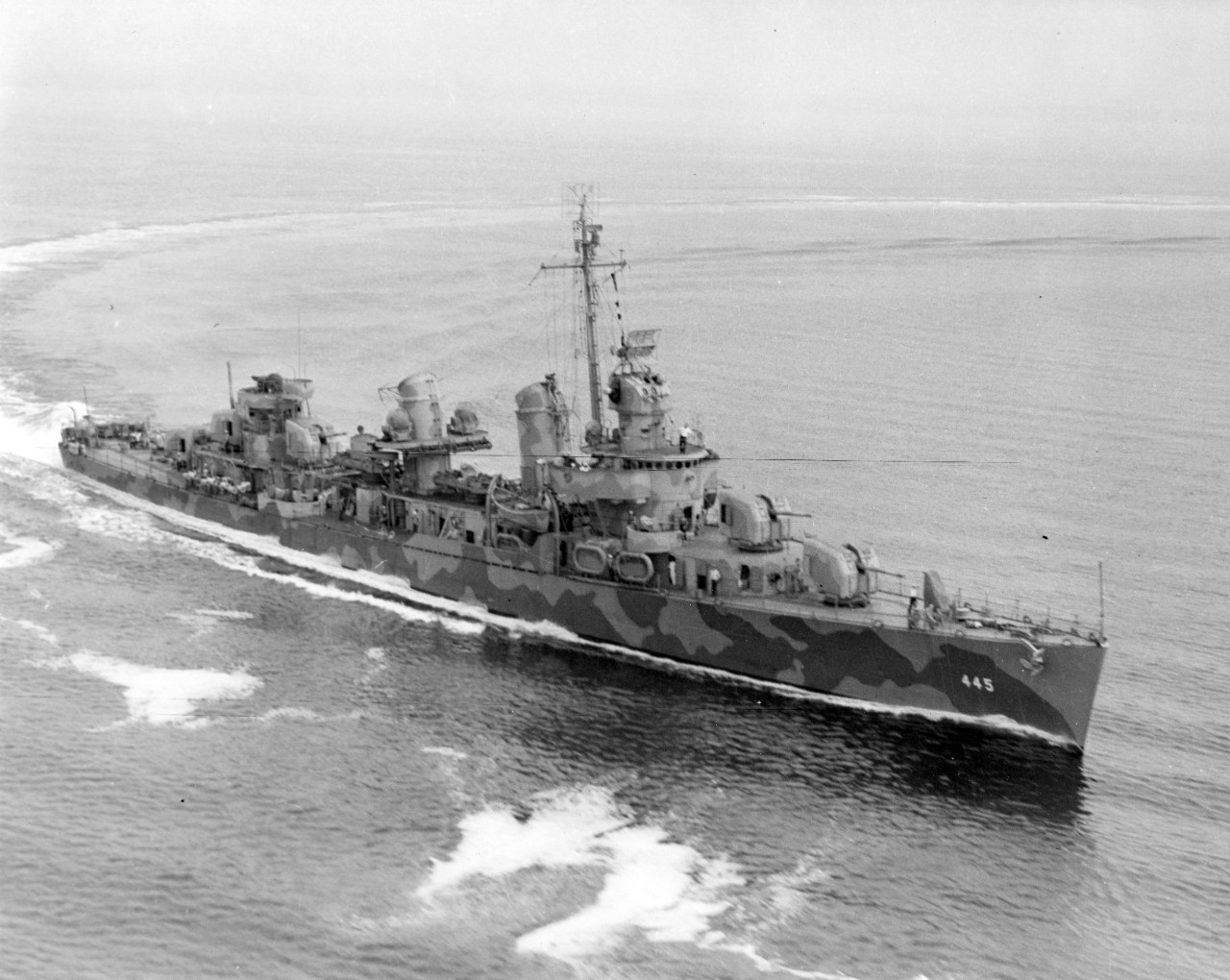 Frank Friday Fletcher, born 23 November 1855 in Oskaloosa, Iowa, was a member of the Naval Academy class of 1875. As Commander of the 1st Division, Atlantic Fleet, he directed the landing at Vera Cruz, Mexico, 21 and 22 April 1914, with distinction which won him the Medal of Honor. He was named Commander-in-Chief of the Atlantic Fleet later that year, ranking as Admiral from 10 March 1915 until completing his assignment in 1916. He served on the General Board until retiring on 23 November 1919, earning the Distinguished Service Medal for his meritorious service during World War I. Twice recalled for temporary active duty, he served in 1925 on a board studying the most effective use of aircraft in national defense. Admiral Fletcher died in New York City 28 November 1928.

Fletcher arrived at Noumea, New Caledonia, 5 October 1942 from the east coast, and at once began escort and patrol duty in the Guadalcanal operation, bombarding Lunga Point 30 October. Sailing from Espiritu Santo 9 November to cover the landing of reinforcements on the embattled island, she joined in driving off a heavy enemy air attack on the transports 12 November, splashing several enemy aircraft. This was the opening phase of the Battle of Guadalcanal, a 3-day air and surface action in which American naval forces fought so determinedly and tenaciously to hold control of the seas in the Solomons that the Japanese never again sent large naval forces into the waters around Guadalcanal. Fletcher played an important part in the surface action off Guadalcanal 13 November, firing guns and torpedoes in the general melee which sank two Japanese destroyers and damaged battleship Hiei, later sent to the bottom by carrier and Marine aircraft.

Fletcher retired to replenish at Espiritu Santo, arriving the day after the battle, and after patrolling against submarines off Noumea, sortied 30 November 1942 with a force of cruisers and destroyers to intercept a force of enemy transports and destroyers expected to attempt a reinforcement of Guadalcanal that night. Fletcher led the force through Lengo Channel, and made the first radar contact with the enemy off Tassafaronga Point just before midnight. The resulting battle saw one Japanese destroyer sunk, and one slightly damaged and four American cruisers badly damaged, all but one of which were saved by superb damage control measures. Fletcher rescued survivors of Northampton (CA-26), ingeniously using cork-floated cargo nets to take great groups of them from the water.

The destroyer continued to operate in the Solomons, patrolling, bombarding shore targets, driving off Japanese air attacks, rescuing downed aviators, destroying Japanese landing barges, and covering new landings on the northern coast of Guadalcanal. Out on patrol 11 February 1943, Fletcher was alerted by a smoke float dropped by a plane from Helena (CL-50), and sped to attack and sink the Japanese submarine I-18. She sailed in support of the landings on the Russell Islands 21 February, bombarded Munda airfield on New Georgia during the night of 5-6 March, and continued to guard the movement of transports in the Solomons.

Between 23 April 1943 and 4 May, Fletcher was in Sydney, Australia, for a well-earned breather and a chance to put the ship in top condition for another month of general duty in the Solomons. She left Espiritu Santo 19 June for a stateside overhaul, returning to Noumea 27 September to resume her former activities until 31 October. Then she sortied with a carrier task group to provide air support for the invasion of the Gilbert Islands, fighting off a Japanese counter-attack from the air 26 November. Again Fletcher fired on Japanese aircraft on 4 December, when the task group came under attack after it had made a strike on Kwajalein.

Fletcher returned to Pearl Harbor 9 December 1943, and after a brief overhaul and training on the west coast, was ready for the attack on the Marshalls. She screened a force of transports from San Diego to Lahaina Roads between 13 and 21 January 1944, then joined a bombardment group to fire on Wotje Atoll 30 January. Next day she rendezvoused with the main attack force for the landings on Kwajalein, screening the transports and patrolling off the atoll until 4 February. After escorting empty transports to Funafuti, Fletcher reported at Majuro 15 February for duty screening battleships in bombardments of Taroa and Wotje on 20 and 21 February, then patrolled off Eniwetok.

After joining in training exercises off Port Purvis, Fletcher arrived at Cape Sudest, Netherlands New Guinea, 18 April 1944. This was her base during the next month as she supported the Humboldt Bay landings with bombardment on tiny Ali and Seleo Islands 23 April, and by covering reinforcement landings on 30 April. After escorting a convoy to Noumea, out of which she patrolled against submarines in late May, Fletcher arrived at Humboldt Bay 5 June. She made one patrol against any attempt of the Japanese to reinforce their Biak garrison, then covered and provided shore bombardment for the invasions of Noemfoor, Sansapor, and Morotai, as well as patrolling and escorting reinforcements for these various operations through the summer.

Fletcher reached Manus 9 October 1944 from Humboldt Bay to prepare for the invasion of Leyte, for which she sortied 12 October screening transports. She covered them while they sent their boats ashore in the initial landings 20 October, and next day departed for New Guinea, thus clearing Leyte Gulf before the great battle for its control broke out. She returned to Leyte with transports carrying reinforcements 23 November, and through the next month, continued her support of the first phase of the Philippine Liberation, escorting convoys, firing prelanding bombardments at Ormoc Bay and Mindoro, and firing on Japanese aircraft in several attacks.

On 4 January 1945, Fletcher sortied from San Pedro Bay to provide close cover for the Luzon Attack Force as it sailed toward its objective. She splashed at least one of the many Japanese aircraft which attacked on 8 January, and during the landings in Lingayen Gulf the next day, patrolled the Gulf. After supporting the landings on San Antonio Beach, Luzon, 29 January, she entered Subic Bay to cover minesweeping, then on 31 January provided fire support to the landings in Nasugbu Bay. Fletcher began 4 days of operations in the occupation of Bataan and Corregidor 13 February, firing a preliminary bombardment, giving fire support on call, and covering minesweepers opening Manila Bay. On 14 February, while firing on Japanese batteries at Los Cochinos Point, Fletcher took a hit which killed eight and wounded three of her men. She continued to fire as she controlled damage, and a half-hour later added rescue operations to her activities as she took the survivors off YMS-48, also hit by Japanese fire. Fletcher's firing in Manila Bay continued until the 17th.

Fletcher took part in the landings at Puerto Princesa, Palawan, and Zamboanga, covered minesweeping and landings at Tarakan, and gave local patrol and escort service in the Philippines until 13 May 1945, when she sailed for a west coast overhaul. After exercises off San Diego and in the Hawaiian Islands, she was immobilized at San Diego until placed in commission in reserve 7 August 1946 and out of commission in reserve 15 January 1947.

She was re-classified DDE-445 on 26 March 1949. Recommissioned 3 October 1949 as a specialist in antisubmarine warfare, Fletcher sailed for San Diego 1 May 1950 for a tour of duty with the Seventh Fleet in the western Pacific. At the outbreak of the Korean Conflict, she lay at Hong Kong with Valley Forge (CV-45), and on 3 July arrived off Korea with the Valley Forge group, augmented by British carrier HMS Triumph, to begin launching air strikes on North Korea. Through the summer, she sailed off Korea on this duty, replenishing when necessary at Buckner Bay, Okinawa, or Sasebo, Japan. She also participated in the invasion of Inchon from 13 to 17 September, and returned to Pearl Harbor, her home port 11 November.

On 19 November 1951, Fletcher cleared Pearl Harbor for another tour of duty screening the carriers of the 7th Fleet in Korean operations. She also fired shore bombardment on two occasions, participated in antisubmarine training off Okinawa, and patrolled in the Taiwan Straits. Returning to Pearl Harbor 20 June 1952, she was at sea again from 5 September to 24 November for atomic tests in the Marshalls, then completed another tour of Far Eastern duty from 14 May 1953 to 30 November.

Annually from 1954 through 1962 Fletcher sailed to the Far East for duty with the Seventh Fleet, in 1955 providing antisubmarine screening for the evacuation of the Tachen Islands. In both 1957 and 1958 she made her outward bound passage by way of Samoa and Australia. Intensive antisubmarine training was her major occupation during periods between deployment. She served with distinction in the Vietnam War.

Decommissioned at San Diego on 1 August 1969, Fletcher was stricken from the Naval Vessel Register the same day, and custody of the ship was turned over to the U.S. Naval Ship Maintenance Facility, San Diego.

In late January 1970, consideration was given to having ex-Fletcher “saved and delivered to a Potomac site as part of a [Smithsonian Institution] memorial.” That being the case, the Inactive Fleet Ship Facility, San Diego, received instructions “to make the ship as watertight and weathertight as they can and to limit stripping” – some of the latter having already occurred in the interval following the ship’s striking. Additionally, “blanking…normally required to maintain a ship for an extended period has not been done. The ship [as a consequence] is generally dirty.”

Having been retained on “hold,” ex-Fletcher remained in an indefinite status. A little over a year later, however, on 4 March 1971, the Smithsonian’s Armed Forces Advisory Board informed the Navy that the museum no longer desired either ex-Fletcher or ex-Gleaves (DD-423), but preferred “the donation of a Fletcher-class destroyer inactivated in the 1945/6 era, the configuration of which would more conform to the original Fletcher. In any event, the museum [would] not be ready until their marine park or berthing sites are completed. Due to paucity of funds,[that] could mean a few years hence.”

Less than a year following the Smithsonian’s rejection of ex-Fletcher, the ship was put up for sale as scrap. Sold on 21 January 1972 to Tai Kien Industries Co., Ltd., of Taiwan, the veteran of three wars was signed-for by the captain of the tug Iris. Instead of well-earned memorialization, ex-Fletcher suffered the ignominy of the scrapper’s torch. 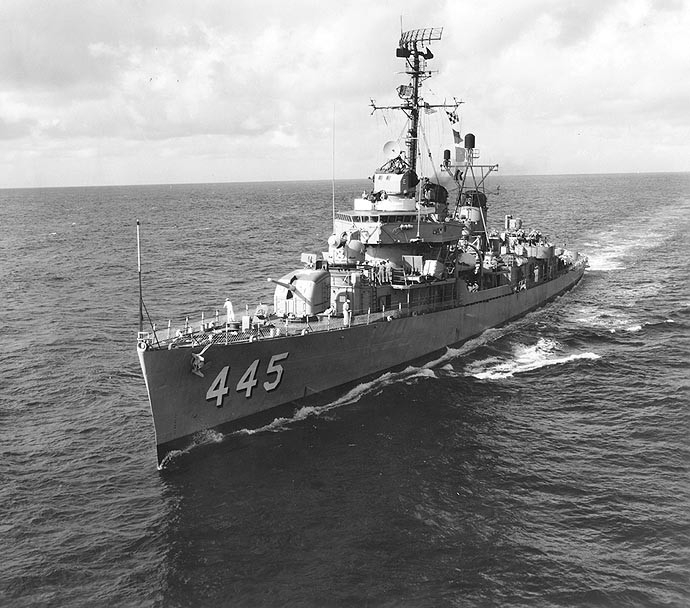 Fletcher (DD-445) underway at sea in 1967. Note the white star painted atop her forward 5/38 gun mount. This photograph was received from Fletcher in 1969. Official U.S. Navy photograph from the collections of the Naval History and Heritage Command. Catalog#: NH 68919