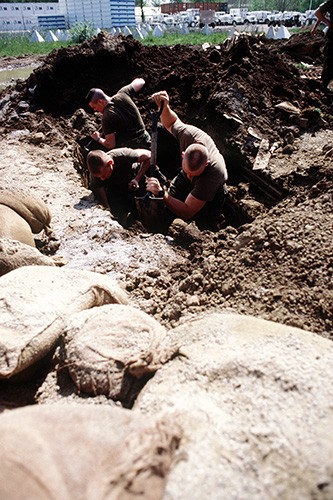 Caption: 330-CFD-DD-ST-98-02272: Operation Provide Promise. U.S. Navy Seabees dig a trench at one of several sites being worked on at Camp Pleso. Photograph received April 30, 1994. Official Department of Defense photograph, now in the collections of the National Archives.

During 1991-1992, the former Yugoslavia began to split apart with civil war.   In the spring of 1992, U.S. Forces helped to keep food and medical supplies flowing into Bosnia.   Air operations were the vital part of the operation, though a hospital and a treatment center for UN Protection Forces were established.  In this center, U.S. Army, Navy, and Air Force units rotated every six months.   When the mission ended in January 1996, it was the longest humanitarian airlift operation performed by the Department of Defense. 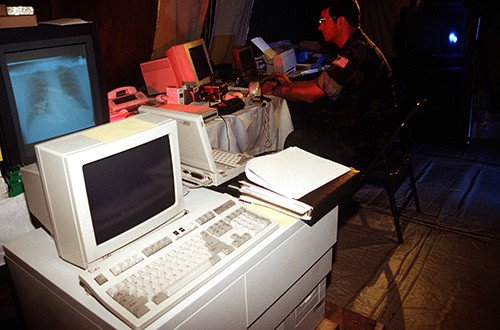 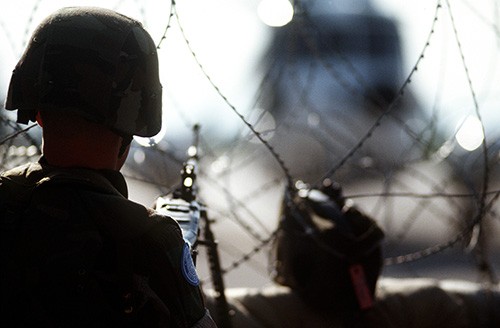 Caption: 330-CFD-DD-ST-98-02279: Operation Provide Promise. The rear view of the head and shoulders of a U.S. Marine peering through concertina wire as he mans a machine gun to provide a defense for the perimeter of Camp Pleso during a bunker exercise. Photographed by TSGT Lynchard. Photograph received April 30, 1994. Official Department of Defense photograph, now in the collections of the National Archives. 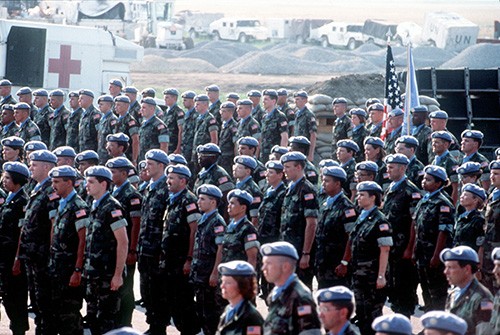 Caption: 330-CFD-DF-ST-95-01571: Soldiers, Sailors, Marines and Airmen of Joint Task Force Provide Promises stand in formation while the colors are being presented. They are being awarded the United Nations Medal for Service for the period of March 1994 through July 1994. The United States contingent provided critical humanitarian and medical aid to the people of the former Republic of Yugoslavia. Photographed on July 4, 1994 by SSTG Russ Pollanean. Official Department of Defense photograph, now in the collections of the National Archives