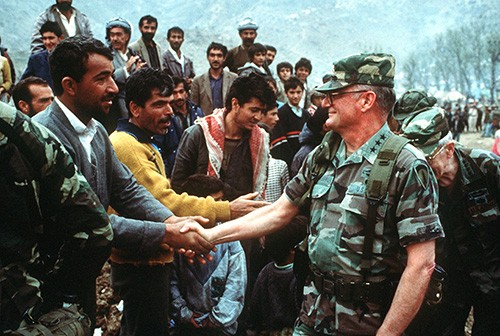 In April 1991, following Operation Desert Storm a few months earlier, the Kurds of northern Iraq revolted against Saddam Hussein.  The revolt was suppressed, and almost a half a million Kurdish men, women, and children sought to flee the country into Turkey across the mountanious border.  Trapped, a joint and multinational task force of a dozen countries began to stop the suffering and dying of the refugees.  By mid-July, the task force pulled out, but a small force remained left behind, and a no-fly zone was established against Iraqi aircraft.  The UN assumed responsibility for the refugee camps.   The no-fly zone remained in effect until 1996 when President William J. Clinton transitioned the operation to Operation North Watch as the mission became more of a no-fly mission than providing humanitarian relief. 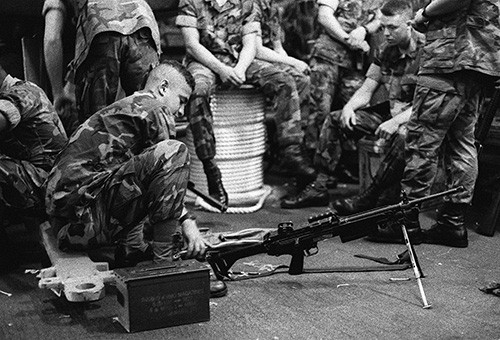 Caption: 330-CFD-DN-SN-91-10181: Operation Provide Comfort. A U.S. Marine cleans his XM-249E1 squad automatic weapon (SAW) aboard a U.S. Navy ship as he prepares for relocation to an outlying camp for the operation. Photographed by PH3 James Klein, April 14, 1991. Official U.S. Navy photograph, now in the collections of the National Archives. 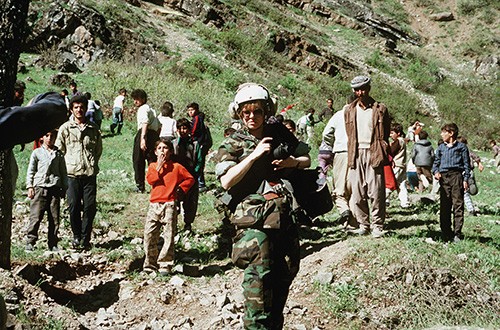 Caption: 330-CFD-DN-ST-92-02280: Operation Provide Comfort. Kurdish refugees watch a U.S. Navy Photographer’s Mate as she prepares to set up for her next shot in the camp. Public Affairs personnel were coving the camps. Photographed by Lieutenant Junior Grade Don Savage, April 1, 1991. Official U.S. Navy photograph, now in the collections of the National Archives. 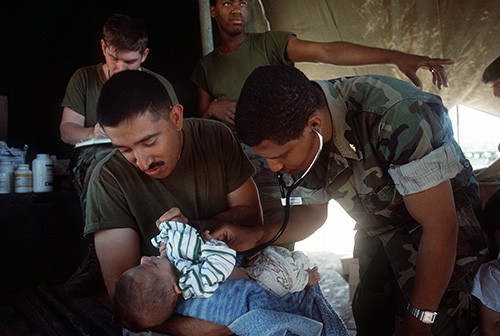