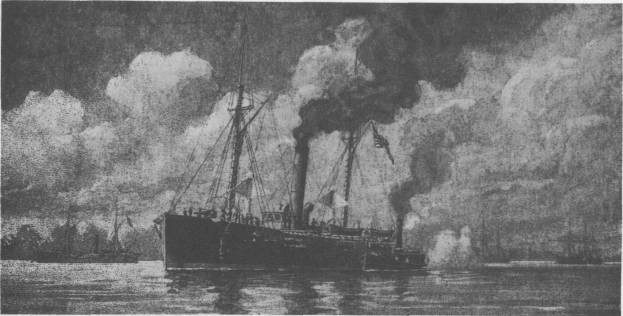 Caption: Artist's impression of the steam gunboat Varuna during her brief service with the West Gulf Blockading Squadron.

A Vedic god, originally of the sky but later of the god of waters, who guarded immortality, truth, and right and punished evildoers.

The first Varuna, originally intended for merchant service between New York and New Orleans, was laid down in late January or early February 1861 at the Mallory Yard, Mystic, Conn.; launched there in the following September; and purchased by the Navy at New York City on 31 December of that same year.

On 10 February 1862, she was ordered to remain in New York until Monitor was ready for action so that she might escort the new ironclad from New York to Hampton Roads, Va., to protect the wooden-hulled Union blockaders there from the Southern armored ram, CSS Virginia. However, these orders were revoked later that same day; and Varuna was assigned to the newly established West Gulf Blockading Squadron. En route south late in February, Varuna put into Port Royal, S.C., for repairs, where ship's commanding officer, Commander Charles S. Boggs, assumed temporary command of the harbor on 24 February during Flag Officer Samuel F. Du Font's absence. The gunboat finally joined Rear Admiral David G. Farragut's West Gulf Blockading Squadon on 6 March.

On 24 April, Varuna was with the squadron during Farragut's daring nighttime dash past Confederate works guarding the Mississippi below New Orleans, Fort Jackson and Fort St. Philip. At the height of the melee, Varuna was rammed twice by the steamer CSS Governor Moore and struck twice again immediately thereafter by the cottonclad ram CSS Stonewall Jackson. After striking Varuna, Lt. Beverly Kennon, CSN in command of one of the Confederate warships, Governor Moore, found himself unable to depress his guns far enough to fire upon the Union vessel; and so he shot through the bow of his own ship and used the resulting hole as a gun port. Although fatally damaged, Varuna backed off from the Confederate vessels and continued to subject them to a withering fire until rising water silenced her guns. Her determined fight contributed greatly to Farragut's complete victory on the lower Mississippi.

Rear Admiral Farragut's stunning victory and subsequent capture of New Orleans, itself, electrified the North. Varuna's part in the Union triumph was soon commemorated in George H. Bowker's poem, The Varuna, which appeared in the Philadelphia Press on 12 May.