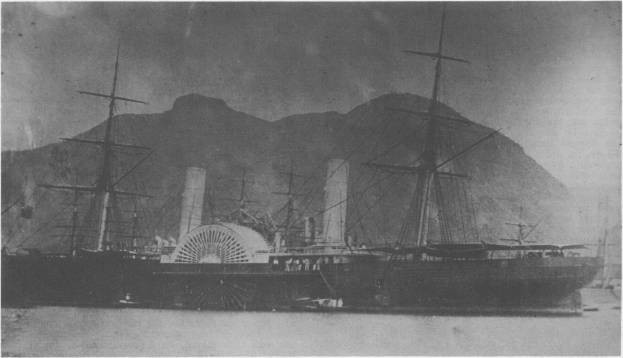 Cornelius Vanderbilt, born on 27 May 1794 on Staten Island, N.Y., began his career ferrying freight from Staten Island to New York City. About a decade later, he and Thomas Gibbons challenged Robert Fulton's monopoly of commercial navigation of New York State waters. Fulton's monopoly was eventually overturned by the Supreme Court in Gibbons v. Ogden (1824) in a landmark case defining federal power over interstate commerce. Soon after this decision, Vanderbilt embarked upon an ambitious, worldwide, steamboat enterprise of his own in which he acquired the nickname "Commodore" along with a reputation for toughness and determination.

In the 1860's, Commodore Vanderbilt diversified into railroads. He bought up small, unprofitable lines and joined them to form the New York Central Railroad System. During the financial panic of 1873, he sponsored building projects that alleviated the effects of the panic in New York City. He subsequently donated one million dollars to Central University, which thereafter was called Vanderbilt University, in Nashville, Tenn. He died in New York City on 4 January 1877.

Vanderbilt, originally a transatlantic passenger and mail steamer, was built by Jeremiah Simonson of Greenpoint, Long Island, N.Y., in 1856 and 1857; chartered by the Army shortly after the start of the Civil War in April 1861; offered to the Army by her owner, Commodore Cornelius Vanderbilt, in early 1862; and transferred to the Navy on 24 March.

Popularly known as "Vanderbilt's Yacht," the former flagship of Commodore Cornelius Vanderbilt's North Atlantic Mail Steamship Line began her military career in Hampton Roads, Va., intended for use as a ram against the Confederate ironclad CSS Virginia. Commodore Vanderbilt, himself, suggested filling the bow of the vessel with concrete and reenforcing it with iron plating. This was not done, however, and Vanderbilt was turned over to the Navy on 24 March and fitted with a heavy battery of 15 guns at the New York Navy Yard during the summer of 1862. She left New York on 10 November and, after conducting a brief search for CSS Alabama, the most destructive Confederate commerce raider of the entire war, put into Hampton Roads on 17 January 1863.

Ten days later, Vanderbilt received orders to conduct a much longer and more thorough search for Alabama. This year-long cruise took the vessel to the West Indies, eastern coast of South America, Cape of Good Hope, St. Helena, Cape Verde, the Canary Islands, Spain and Portugal. During the West Indies portion of her deployment, Vanderbilt served as flagship of Commodore Charles Wilkes' Flying Squadron. During the search, Vanderbilt captured the blockade-running British steamer Peterhoff on 25 February, off St. Thomas, Virgin Islands, causing a dispute between the British and Americans as to the disposition of mail carried aboard the steamer. President Lincoln eventually ordered the mail returned to the British. Vanderbilt's captures also included the British blockade runner Gertrude, taken off Eleuthera Island in the Bahamas on 16 April, and the British bark Saxon, seized at Angra Peguena, Africa, on 30 October. Saxon was suspected of having rendezvoused with and taken cargo off CSS Tuscaloosa earlier. However, pursuing leads as to the whereabouts of Alabama, herself, became increasingly frustrating as Vanderbilt would often arrive at a port only to discover that her quarry had departed only a few hours earlier. She eventually returned to New York in January 1864 for repairs without ever having sighted the Confederate vessel.

Vanderbilt left New York in September and cruised off Halifax, Nova Scotia, searching for blockade runners. The Halifax-Wilmington, N.C., route for blockade runners was used heavily at this time owing to outbreaks of yellow fever at Bermuda and Nassau. Nevertheless, the Union cruiser failed to take any prizes and put into Boston, Mass., on 13 October. She was deployed with the blockade off Wilmington in November and participated in the unsuccessful first amphibious assault upon Confederate Fort Fisher in the Cape Fear River, N.C., on 24 and 25 December. The Fleet took the fort during a second amphibious assault on 13 and 15 January 1865. Vanderbilt returned to New York in late January, remaining until 24 March when she left for the Gulf of Mexico ferrying new recruits. From there, she proceeded to Charleston, S.C., towing the uncompleted Confederate ram Columbia from Charleston to Norfolk in May, and towed the Onondaga from Norfolk to New York in June. Vanderbilt served as a receiving ship at the Portsmouth (N.H.) Navy Yard during the summer of 1865.

The Civil War now over, Vanderbilt sailed from Portsmouth on 14 August and put into the Philadelphia Navy Yard on 27 August to be fitted put for a cruise around Cape Horn. She left Philadelphia on 25 October and arrived in Hampton Roads three days later. There, she was designated flagship of a special squadron consisting of herself, Tuscarora, Powhatan, and Monadnock. The squadron was commanded by Commodore John Rodgers and intended to increase the Pacific Squadron to a 14-ship force. The vessels left Hampton Roads on 2 November and arrived at San Francisco, Calif., on 21 June 1866 after stopping at most major South American ports while circumnavigating the South American continent.

Vanderbilt was decommissioned at Mare Island, Calif., on 30 June, but was soon recommissioned and, on 13 October, sailed from San Francisco to Honolulu, Hawaii, with the Hawaiian monarch, Queen Emma, on board. The cruiser returned to San Francisco on 3 December and remained there at anchor until placed in ordinary at Mare Island on 24 May 1867. She lay there, in ordinary, until sold on 1 April 1873 to Howe & Company of San Francisco. Her new owners removed her machinery, gave her a graceful clipper bow, and full rigging. Renamed Three Brothers, she spent most of her time in the grain trade between San Francisco, Le Havre, Liverpool, and New York where she acquired an enviable reputation for speed and handling. "Vanderbilt's Yacht" served successive owners until 1899, at which time the vessel, now a coal hulk, was sold for scrap at Gilbraltar.