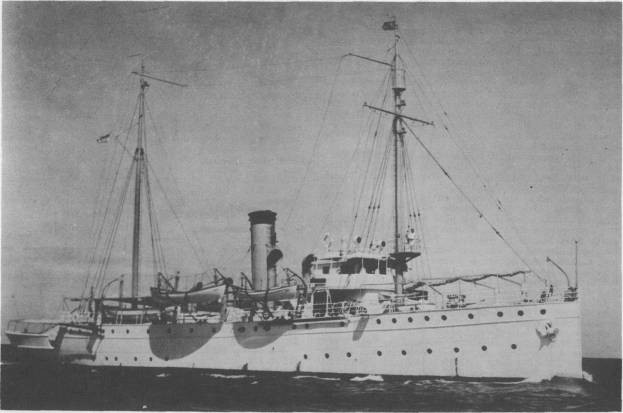 Unalga, a Coast Guard cutter built by the Newport News Shipbuilding & Drydock Co., was launched on 10 February 1912; sponsored by Miss Elizabeth Hilles; and commissioned by the Revenue Cutter Service (RCS) at its depot at Arundel Cove, Md., on 23 May 1912.

Unalga spent the summer of 1912 fitting out. In June, she received her guns at Washington, D.C., and completed installing them at Baltimore in July and August. On 6 September, she received orders to report to the Commander, Northern Division, Pacific Coast, RCS, at Port Townsend, Wash.

She departed Baltimore that day and, after stops at Newport News and Norfolk, she headed out into the Atlantic. She reached the Straits of Gibraltar on 11 October and, three days later, continued on toward Naples, Italy, where she arrived on the 19th. She got underway again on the 25th; stopped at Malta from 26 to 29 October; and arrived at Port Said, Egypt, the northern terminus of the Suez Canal, on 1 November.

While Unalga made her way from port to port eastward across the Mediterranean, Bulgaria, Serbia, Greece, and Montenegro took advantage of the Italo-Turkish War in Libya to form the Balkan League and descend upon the embattled Ottoman Empire, Greek and Serbian armies invaded European Turkey in an effort to liberate Ottoman possessions populated by their kinspeople. While the Greeks and Serbs moved into Macedonia, three Bulgarian armies drove headlong into Thrace, invested Adrianople, and defeated Turkish armies at the battles of Kirk Kilissa and Lule Burgas. The success of that drive alarmed the foreign community in Constantinople lest the capital fall to the invader with all the murder and mayhem attendant upon a Balkan war.

To protect Americans and other foreigners in Turkey in the event that Constantinople should fall, the United States Ambassador, Mr. Rockhill, asked that warships be sent to the Levant. In response to this request, the Navy Department dispatched Brutus and planned to send two other warships. The Treasury Department ordered Unalga to remain at Port Said and place herself under the orders of Ambassador Rockhill should need for her services arise. During the six weeks she stayed at Port Said, the tempo of hostilities decreased in Thrace because the Bulgars failed to breach the Chatalja Line held by the Turks athwart the road to Constantinople. On 3 December, the Turks and Bulgars concluded a preliminary armistice preparatory to the peace conference which began in London in late December. On 17 December, the same day the conference began, Unalga departed Port Said to transit the Suez Canal and continue her interrupted voyage to the west coast of North America.

After stops at Aden, Ceylon, Singapore, Manila, Yokohama, Japan, and Honolulu, the cutter arrived at Port Townsend on 22 March 1913. Five days after reporting to the Commander, Northern Division, she was reassigned to the Bering Sea Fleet. On 3 May, she departed Port Townsend for her first cruise to Alaskan waters. During that assignment, she visited Kodiak and Unalaska before returning to Port Townsend on 11 August. On 3 October, Unalga was reassigned to the Southern Division and, on the 21st, got underway for San Francisco, where she arrived four days later. The cutter served with the Southern Division until detached on 25 March 1914. After spending the first 20 days of April at Oakland, Calif., undergoing repairs, she headed back to Alaska and duty in the Bering Sea.

For the next three years, the cutter alternated between assignments with the Northern Division and the Bering Sea Fleet. After World War I broke out in Europe on 1 August 1914, she took on the added responsibility of enforcing America's neutrality laws. In February 1915, she also started patrols to enforce the provisions of the 1911 convention between the United States, Great Britain, Japan, and Russia for the protection of fur seals. Those two responsibilities, as well as her normal duties, took her to a number of Alaskan ports such as Seward, Juneau, and Skagway in addition to Unalaska and to such places as Cook's Inlet, Slime Banks, the Pribilofs, and St. Matthew's Island.

When the United States entered World War I on 6 April 1917, President Woodrow Wilson issued an Executive Order which placed the Coast Guard under the jurisdiction of the Navy Department for the duration of hostilities; and Unalga joined the Navy. Though assigned to the seagoing fighting service, she continued to discharge her former duties. She made a cruise a year to the Alaska-Bering Sea area during the summer months of 1917, 1918, and 1919. On each cruise, she transported mail and supplies to fishermen and natives in inaccessible areas, provided medical assistance where needed, and aided vessels in distress. During the 1918 cruise, she also participated in the settlement of a labor dispute that arose in several canneries. In addition to the routine described above, she continued patrols in support of the fur seal protection convention. Since the nation was at war, Unalga also kept a vigilant watch for enemy ships, but the slight probability of the appearance of a German, Austro-Hungarian, or Turkish ship in the northern Pacific allowed her to concentrate on her peacetime mission. In all probability, Unalga never fired her guns in anger during her first hitch with the Navy.

The hostilities ended with the armistice of 11 November 1918, but the Coast Guard continued under Navy jurisdiction for another nine months. On 28 August 1919, the Treasury Department resumed control. On that day, the names of all Coast Guard ships which had served the Navy were struck from the Navy list. Unalga hardly noticed the change, however, because she continued her Bering Sea cruises and Northern Division assignments just as before. The cutter cruised the Alaskan and northern Pacific coasts, making calls at familiar ports through the 1920's. At the conclusion of her summer cruise to the Bering Sea in 1930, she departed Port Townsend to return to the east coast for the first time in 18 years. On 5 September, she arrived at an unspecified depot (probably the one at Arundel Cove, Md.). In any case, she was placed out of commission there on 16 February 1931 and, two days later, moved to Philadelphia for extensive repairs. She departed the navy yard on 27 June 1931 to return to the depot, probably for additional work since she was not placed back in commission until 23 April 1932.

On 14 May, she headed south for duty at Port Everglades, Fla., where she arrived on the 24th. She served at that port and at Fort Lauderdale until sometime in 1934. In September of 1933, the cutter served briefly with the Navy again when she was called upon to patrol the waters of the Florida Strait during the series of revolts in Cuba which finally resulted in the beginning of Fulgencio Batista's 25-year dictatorship. On 1 November, she was released from that duty and, the next day, was ordered to report to the Commander, Southern Area (USCG) for further orders. She resumed normal operations from th- Coast Guard station at Port Everglades until sometime in 1935 when she was transferred to San Juan, Puerto Rico.

Unalga served at San Juan for most of her remaining active career. On 1 November 1941, President Franklin D. Roosevelt transferred the Coast Guard to the jurisdiction of the Navy Department; and Unalga rejoined the Navy. Classified as WPG-53 sometime in 1942, she spent the entire war operating out of San Juan, conducting antisubmarine patrols under the auspices of the Commandant, 10th Naval District. The paucity of information on her World War II service suggests that she never encountered the enemy. Sometime in 1945, the cutter was reassigned to the 5th Naval District, operating in and around Norfolk. Subsequently decommissioned and turned over to the War Shipping Administration, Unalga was sold in July 1946.