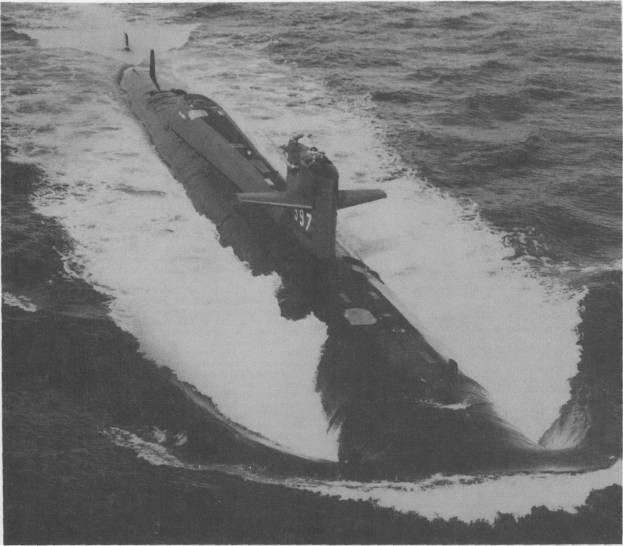 Any of several whitefishes of central and northern North America.

The second Tullibee (SSN-597) was laid down on 26 May 1958 at Groton, Conn., by the Electric Boat Div. of the General Dynamics Corp.; launched on 27 April 1960; sponsored by Mrs. John F. Davidson, the widow of Comdr. Charles F. Brindupke; and commissioned on 9 November 1960, Comdr. Richard S. Jortberg in command.

Following her shakedown in January 1961, Tullibee engaged in sonar evaluations and nuclear submarine tactical exercises with Submarine Developmental Group 2, operating out of New London, Conn., into 1963. During this period, the ship visited Bermuda on several occasions, as well as San Juan, Puerto Rico.

In July 1964, Tullibee participated in fleet exercises in antisubmarine warfare (ASW) tactics with NATO units. The submarine resumed developmental work in 1965 and operated in this capacity into the fall of that year. On 28 October, her home port was temporarily changed to Portsmouth, N.H., when the ship entered the Portsmouth Naval Shipyard, Kittery, Maine, for an extensive overhaul. She remained in drydock for 754 days, emerging on 2 January 1968.

Shifted back to New London, Tullibee deployed to the Caribbean Sea in January 1969 following refresher training and continued developmental work during 1969 and 1970. On 1 August 1970, Tullibee departed New London, bound for the Mediterranean and the ship's first service with the 6th Fleet. During this period, she took part in NATO and 6th Fleet exercises and made port visits to Athens, Greece; Naples, Italy; and Rota, Spain, before returning to New London on 14 December, having travelled some 20,000 miles in 135 days.

In early 1971, the submarine returned to developmental exercises once more to work on SSN tactics and also made a port visit to Cape Canaveral, Fla. Participating in a major NATO exercise in the western Atlantic, Tullibee visited Halifax, Nova Scotia, before she received the Meritorious Unit Commendation for her contingency operations in the Mediterranean during the previous year (from 9 September to 31 October 1970). For the remainder of the year 1971, Tullibee operated in the western Atlantic on NATO and ASW exercises. During this period, too, Tullibee received the Arleigh Burke Fleet Trophy for significant improvement in the ship's battle efficiency and readiness for that fiscal year.

The submarine conducted regular operations with the Atlantic Fleet Submarine Force into 1974, operating off the east coast and in the Caribbean. Following one Caribbean cruise in the fall of 1974, Tullibee departed New London on 28 April 1975 for her second deployment to the 6th Fleet. After operating in the Mediterranean into the fall of that year, the submarine returned to New London in October for an extended period of upkeep.

Tullibee subsequently participated in sonar evaluation tests with HMS Matapan (D 43) in the Caribbean, in two separate deployments between April and June 1976, before undergoing another extended upkeep period. The SSN conducted ASW operations and local operations into the fall of 1976, before she departed New London on 12 November for her third Mediterranean deployment. After serving in the 6th Fleet into the spring of 1977, she returned to her home port on 24 April. During the remainder of the year, Tullibee underwent three upkeep periods interspersed with ASW exercises off the east coast of the United States. The early months of 1978 were spent in preparation for her fourth Mediterranean deployment. Departing New London in March, the submarine conducted operations with various units of the 6th Fleet. The deployment was marred somewhat by a propulsion casualty which necessitated a two-month repair period spent at Rota, Spain. Tullibee returned to New London on 30 August. Operations out of that port took Tullibee into 1979.

Tullibee received a Meritorious Unit Commendation for her service with the 6th Fleet.