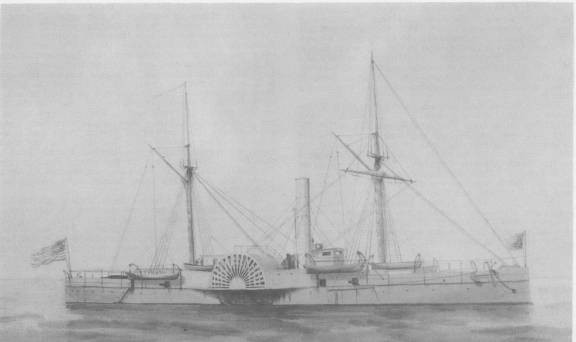 Caption: Tallapoosa, in the gray finish used on ships blockading the southern coast during the Civil War. (NH- 270;

A navigable river which rises in Paulding County in northwestern Georgia and flows in a generally southwestern direction some 268 miles until it joins the Coosa Eiver in central Alabama in forming the Alabama River.

The first Tallapoosa, a wooden-hulled, double-ended steamer built at the New York Navy Yard by C. W. Booz of Baltimore, Md., was launched on 17 February 1863 and commissioned on 13 September 1864, Lt. Comdr. Joseph E. DeHaven in command.

As Tallapoosa was being fitted out, Confederate cruiser Tallahassee was cruising off the Atlantic coast destroying Union shipping from the Virginia Capes to Nova Scotia. Hence, the Union double-ender got underway late in October and spent her first days at sea in seeking the Southern commerce raider. Her futile quest took her from New York to Halifax, then south to the Virginia Capes, then back north again to the coast of Nova Scotia. On 4 November, Tallapoosa encountered a southeasterly gale, which battered the ship for the next two days, disabled both her rudders, and caused other damage. She finally made port at Boston on the morning of the 7th.

Following repairs at the Boston Navy Yard which lasted over a month and one-half, Tallapoosa was assigned to the East Gulf Blockading Squadron. Her most notable duty during this assignment occurred on 11 January 1865 when she assisted in salvaging material and equipment from screw frigate San Jacinto which had run aground in the Bahamas on an uncharted reef near Green Turtle Cay off Grand Abaco Island.

After the Civil War ended, Tallapoosa served in the Gulf Squadron, cruising in the West Indies and the Gulf of Mexico, until 1867 when she was laid up at the Washington Navy Yard. Reactivated in 1869, the ship became a dispatch vessel, beginning a role which soon brought Tallapoosa one of her more interesting missions. In January 1870, she carried Admiral Farragut to Portland, Maine, where he met HMS Monarch at the end of that British turreted battleship's voyage across the Atlantic to return to the United States the remains of philanthropist George Peabody who had died in England. Early the following summer, the double-ender carried Farragut from New York City to Portsmouth, N.H., to visit the commandant of the navy yard. It was hoped that the cool sea breezes of New England would improve the aged and ailing admiral's health. As Tallapoosa neared Portsmouth on 4 July, she fired an Independence Day salute to her famous passenger, the Navy's highest ranking and most respected officer. Upon hearing the warship's guns, Farragut left his sick-bed, donned his uniform, and walked to the man-of-war's quarterdeck. There he commented, "It would be well if I died now, in harness. ..." A month and 10 days later, Farragut died at Portsmouth.

In 1872, Tallapoosa moved to Annapolis, Md., to serve as a training ship at the Naval Academy. The following year, she became a transport. While she performed this duty, her years of service began to show, and it became apparent that she needed extensive repair work. Hence, the ship was largely rebuilt at Baltimore in 1874 and 1875. There, revitalized and configured as a single-ender, the veteran warship resumed her role as a dispatch vessel and continued performing as such for almost a decade.

Shortly before midnight on 24 August 1884, Tallapoosa collided with schooner J. S. Lowell and sank about five miles from Vineyard Haven, R.I. After the ship had been raised and repaired by the Merritt Wrecking Company, she was recommissioned at the New York Navy Yard on 11 January 1886. Assigned to the South Atlantic Squadron, Tallapoosa departed New York on 7 June 1886, bound for Rio de Janeiro. At the time, South America was plagued by much political and social unrest; and United States warships were needed in the area to protect American interests and commerce. Tallapoosa served along the coast of South America until 30 January 1892 when she was condemned as unfit for further service. She was sold at public auction at Montevideo, Uruguay, on 3 March 1892.