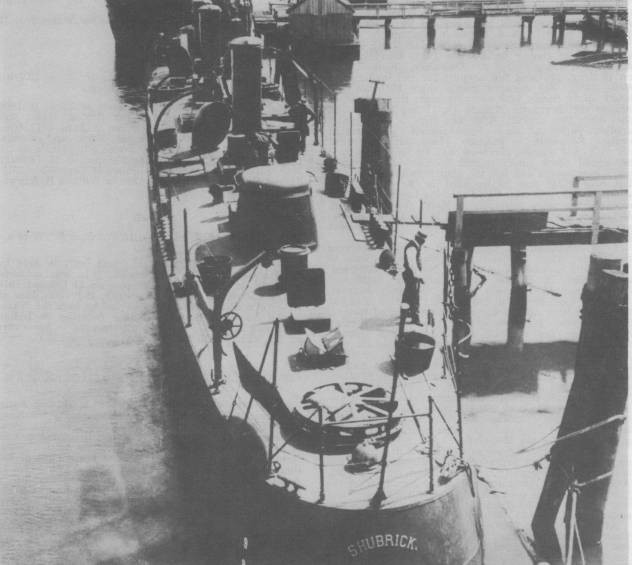 Caption: Shubrick (Torpedo Boat No. 31) moored at Norfolk during the summer of 1901 as she fits out for commissioning. The ring at her stern is the base for a single 18-inch torpedo-tube mount; two more can be seen in waist positions near Shubrick's second stack. Ships of this type, predecessors of the modern destroyer, concentrated their striking power in their torpedoes and carried only small-caliber rapid-fire guns.

William Bradford Shubrick born on 31 October 1790 at "Belvedere," Bull's Island, S.C., studied at Harvard before accepting an appointment as a midshipman in 1806. Following service in the Mediterranean in Wasp, he served in Argus along the Atlantic coast of the United States.

After duty in Hornet early in the War of 1812, he was assigned to Constellation; and, while that frigate was at Norfolk, he led a party of Bluejackets in beating off a British boat attack against Craney Island on 22 June 1813. He subsequently won a Congressional medal for service in Constitution during her capture of Cyane and Levant.

During the more than three decades separating the War of 1812 from the Mexican War, Shubrick commanded, in turn, Lexington and Natchez; directed operation of the West Indies Squadron from 1838 to 1840; and headed the Bureau of Provisions and Clothing from 1845 to 1846.

At the outbreak of the war with Mexico, Shubrick requested sea duty and, in Independence, sailed for the California coast to relieve Commodore Sloat in command of American Naval forces there. However. Commodore James Biddle brought his East India Squadron to Monterey, Calif., on 2 January 1847, only a week after Shubrick's arrival-and assumed command. In April, Shubrick sailed for the coast of Mexico to head the blockade of Mazatlan and Guaymas. Early in June, Shubrick was recalled to California where Biddle restored him to overall command on 19 July and sailed for the East Coast.

Under Shubrick, the Navy successfully conducted the closing operations of the war on the Pacific coast. Highlights were the capture of Guaymas in October and of Mazatlan in November. San Bias fell in January 1848.

The following spring, Shubrick headed home and took command of the Philadelphia Navy Yard in 1849. He subsequently headed the Bureau of Construction and Repair. In August 1852, he became chairman of the Lighthouse Board.

In October 1858, Shubrick sailed in command of the fleet sent to South American waters to support diplomatic efforts to resolve differences with Paraguay resulting from the firing upon the USS Waterwitch.

The second Shubrick was laid down on 11 March 1899 by William R. Trigg Co., Richmond, Va.; launched on 31 October 1899; sponsored by Miss Caroline Shubrick; and commissioned during 1901, Lt. Allen M. Cook in command.

Following trials, Shubrick proceeded to Port Royal, S.C., where she was placed in reserve on 21 November 1901. Six months later, she rejoined the active fleet and, on 7 June 1902, sailed north. She arrived at the Torpedo Station, Newport, R.I., on 18 July 1902; served briefly with the North Atlantic Squadron; then returned to Norfolk where she was decommissioned on 29 November.

Activated in February 1909, Shubrick was recommissioned on 14 May 1909. She joined the 1st Torpedo Flotilla, Atlantic Fleet, on 28 May 1909. During October, she participated in celebrations commemorating the Hudson-Fulton Centenary, then returned to Charleston, where she was decommissioned on 30 November 1909.

Shubrick remained in reserve into 1917, assigned to the Reserve Torpedo Flotilla at Charleston (S.C.) Navy Yard. On 1 April 1917, she was recommissioned and, during World War I, served on local patrol duty in the Charleston area.

On 1 August 1918, Shubrick was renamed Coast Torpedo Boat No. 15 to allow her name to be given to a new destroyer, DD-268, then under construction. Largely inactive after being renamed, she was decommissioned on 23 April 1919, and her name was struck from the Navy list on 28 October. Coast Torpedo Boat No. 15 was sold for scrapping on 10 March 1920 to the U. S. Rail and Salvage Co. of Newburgh, N.Y.