The sixth U.S. Navy ship named Scorpion, but named to perpetuate the name of the fifth Scorpion (SS-278), which sank with all hands in 1944.

The sixth Scorpion (SSN-589) was laid down on 20 August 1958 by the Electric Boat Division, General Dynamics Corp., Groton, Conn.; launched on 19 December 1959; sponsored by Mrs. Elizabeth S. Morrison (née Schmidt), daughter of the late Cmdr. Maximilian G. Schmidt, commanding officer of the fifth Scorpion; and was commissioned on 29 July 1960, Cmdr. Norman B. Bessac in command. 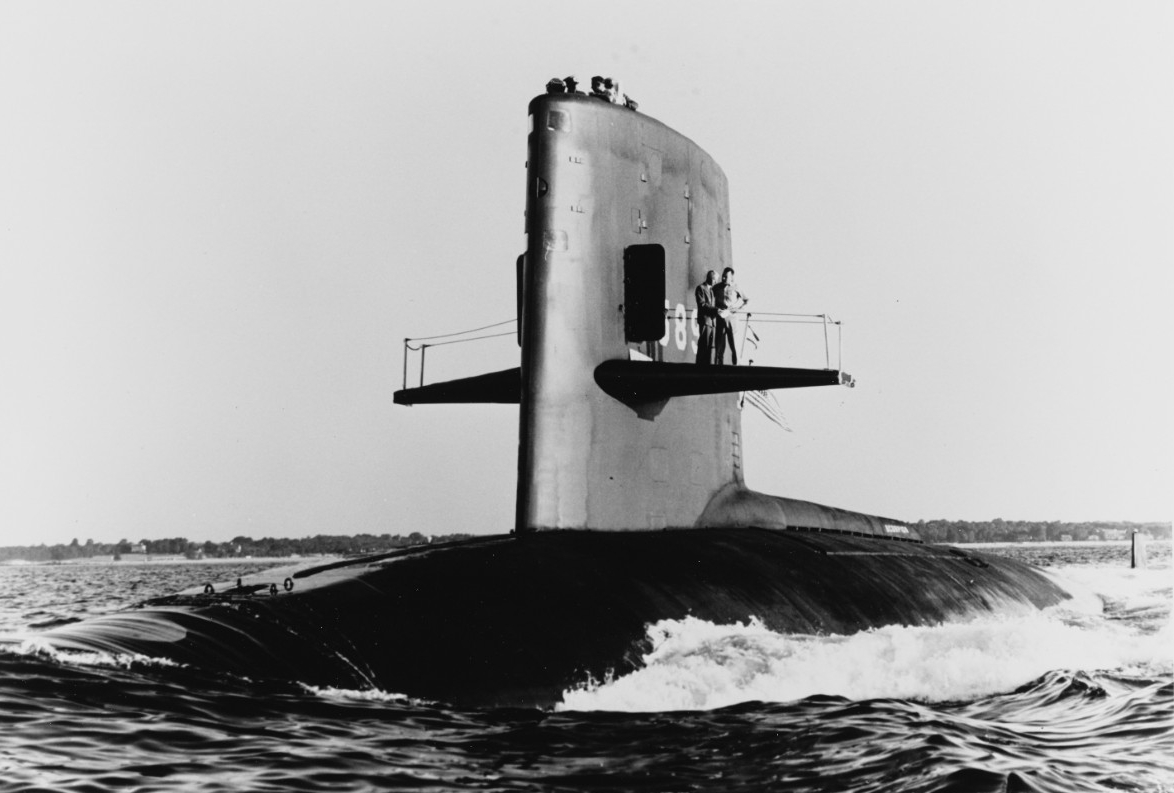 Assigned to Submarine Division 62, Submarine Squadron 6, Scorpion set out from New London, Conn., on a two-month deployment (24 August–28 October 1960) in European waters. During that period, she participated in exercises with units of the Sixth Fleet and of other NATO (North Atlantic Treaty Organization) navies. Scorpion also visited Portsmouth, England, and Faslane, Scotland, during this voyage. After returning to New England, she trained along the eastern seaboard until she (29 May–9 August 1961) crossed the Atlantic again for operations which took her into the summer, and included slipping in to Holy Loch, Scotland. A month after the attack submarine returned to New London -- on 10 September 1961 -- she shifted to Norfolk, Va.

With Norfolk her home port for the remainder of her career, Scorpion specialized in the development of undersea warfare tactics. Varying her role from hunter to hunted, she participated in exercises which ranged along the Atlantic coast south to Florida and in the Bermuda and Puerto Rican operating areas. Scorpion’s meritorious service during these operations brought her the award of the Navy Unit Commendation, and Cmdr. Robert Y. Kaufman, her commanding officer, received the Legion of Merit for his leadership. The increasingly seasoned boat spent the first five months of 1963 carrying out undersea warfare exercises, including more than eight weeks of aggressively stalking hunter-killer antisubmarine groups as their “opposition” submarine.

Scorpion then (June 1963–May 1964), interrupted her operations for an overhaul at Charleston, S.C. Resuming duty off the eastern seaboard in late spring, she again interrupted that duty (4 August–8 October) to make a transatlantic patrol. The following spring (1 May–26 June 1965) she accomplished a similar patrol in European waters, which included a visit to Holy Loch. Scorpion returned to Norfolk for independent exercises that ranged into the Caribbean. During the late winter and early spring of 1966, and again in the fall, she then took part in special operations. Cmdr. James R. Lewis received the Navy Commendation Medal in recognition of his leadership and foresight while commanding the submarine, and a number of other crewmen were cited for their meritorious achievement during these operations.

The submarine accomplished another extended overhaul at Norfolk Naval Shipyard (1 February 1967–15 February 1968), and, beginning in October, wrapped-up her yard work by carrying out refresher training off New London, weapons system acceptance tests off Puerto Rico and the Virgin Islands, and type training out of Norfolk. Scorpion stood out to sea for a Mediterranean deployment on 15 February 1968, touched at Rota, Spain (1–5 March), and then passed through the Strait of Gibraltar and reached Taranto, Italy, on the 10th. 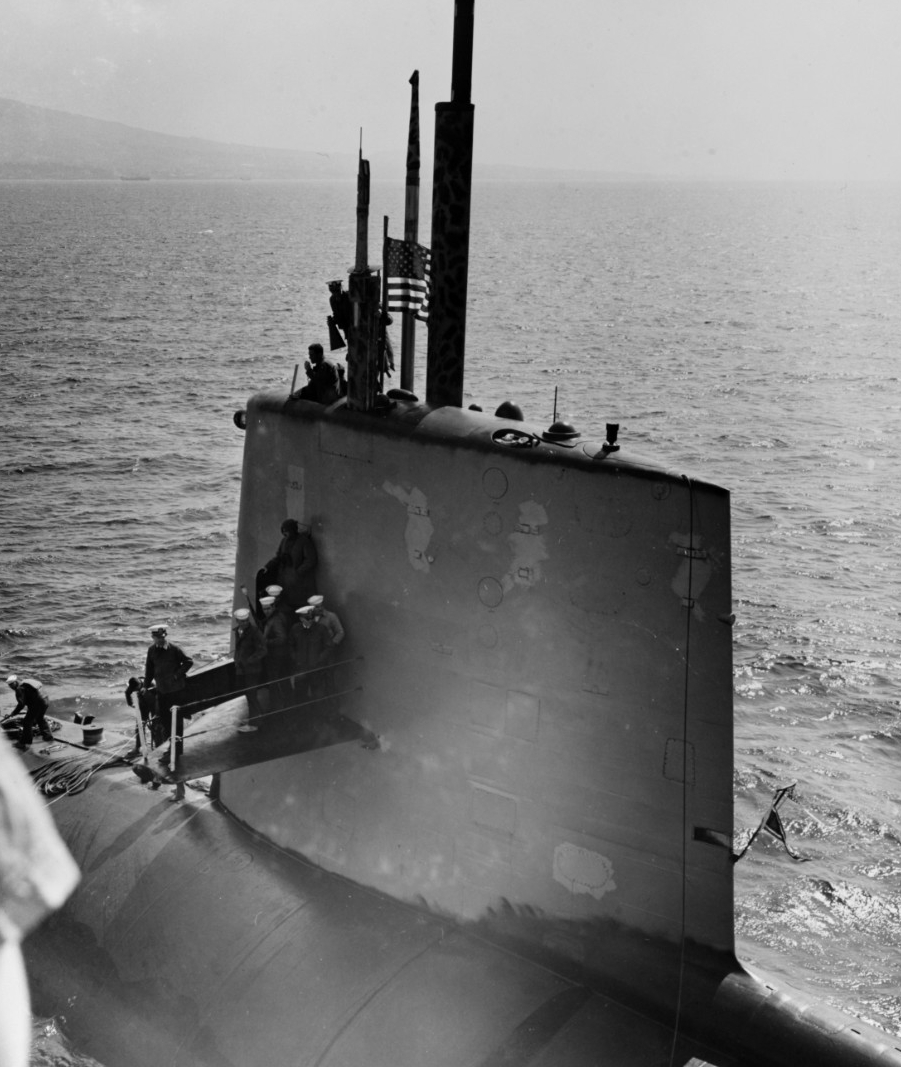 Scorpion operated with the Sixth Fleet into May, and then came about and headed west for home. On 21 May, she indicated her position to be about 50 miles south of the Azores. Six days later, Scorpion was reported overdue at Norfolk, and the United States initiated a massive search for her. Navy, Coast Guard, and Air Force aircraft flying from Naval Station Bermuda, Naval Air Station (NAS) Patuxent River, Md., Naval Air Facility Lajes in the Azores, and NAS Norfolk, including Lockheed SP-2H Neptunes of Patrol Squadron (VP) 56 out of Norfolk, and dozens of ships and submarines including Greenling (SSN-614), Lapon (SSN-661), Pargo (SSN-650), and Skate (SSN-578), Chivo (SS-341), Requin (SS-481), and Sea Leopard (SS-483), submarine rescue ships Kittiwake (ASR-13) and Sunbird (ASR-15), and salvage ships Hoist (ARS-40) and Preserver (ARS-8), searched for Scorpion, but, on 5 June, she was declared “presumed lost” with all hands. Her name was stricken from the Navy list on 30 June. A court of inquiry convened but did not determine the cause of her loss.

The search continued, however; and, at the end of October, Military Sea Transportation Service-manned oceanographic research ship Mizar (T-AGOR-11), located sections of Scorpion’s hull in more than 10,000 feet of water, about 400 miles southwest of the Azores. Subsequently, the court of inquiry was reconvened and other vessels, including research bathyscaph Trieste II, were dispatched to the scene. Despite the myriad of data and pictures collected and studied, however, the cause of Scorpion’s loss remains a mystery. 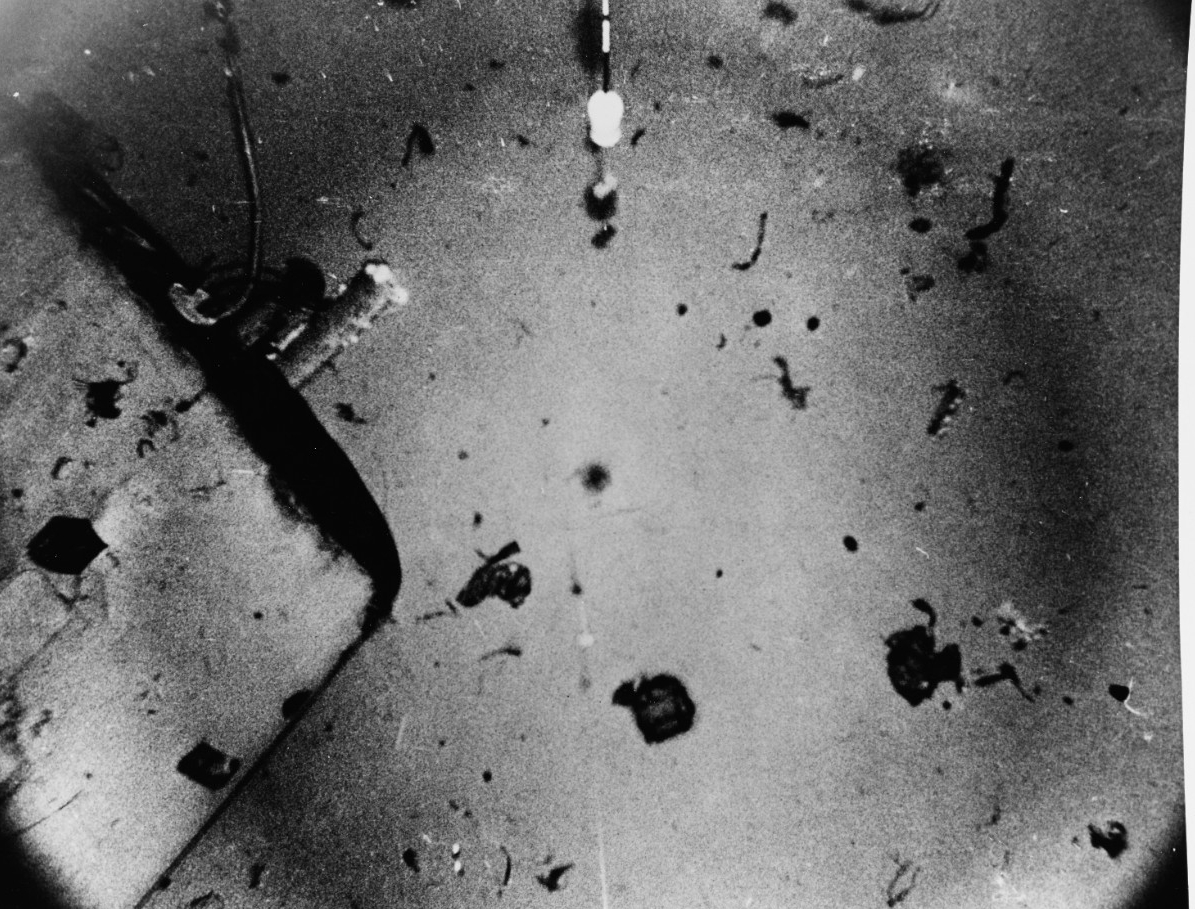 Caption: A view of Scorpion’s sail, probably taken when Mizar locates the sunken submarine in October 1968, on the Atlantic Ocean floor 10,000 feet deep, some 400 miles southwest of the Azores. This image shows the starboard side of the sail, with its after end at top left, and the starboard access door in lower left. Debris litters the ocean bottom nearby. The device in top center is part of the equipment used in locating and photographing the wreckage. The original photograph bears the date 30 January 1969. (Naval History and Heritage Command Photograph NH 1136656)

The Sailors Who Perished in the Loss of Scorpion