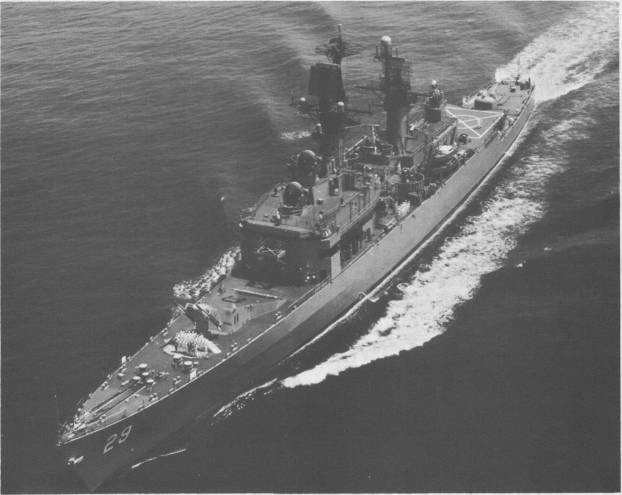 James Edward Jouett was born near Lexington, Ky., 7 February 1826 and was appointed Midshipman 10 September 1841. He served on the African coast in Decatur with Mathew C. Perry and in John Adams during the Mexican War.

At the beginning of the Civil War, Jouett was captured by Confederates at Pensacola but was soon parolled. He then joined the blockading forces off Galveston, distinguishing himself during the night of 7 to 8 November 1861 in the capture and destruction of Confederate schooner Royal Yacht. Jouett later commanded Montgomery and R. R. Cuyler on blockading duty and in September 1863 took command of Metacomet. In the Battle of Mobile Bay, 5 August 1864, his ship was lashed to Admiral Farragut's flagship Hartford as the gallant ships entered the bay. Monitor Tecumseh was sunk by an underwater "torpedo", but the ships steamed boldly on, inspired By Farragut's famous command: "Damn the torpedoes, full speed ahead." Metacomet was sent after two Confederate gunboats, and in a short chase Jouett riddled Gaines and captured Selma.

Jouett had various commands ashore and afloat after the Civil War, taking command of the North Atlantic Squadron in 1884. In 1889 he commanded a naval force which forced the opening of the isthmus of Panama, threatened by insurrection. Rear Admiral Jouett retired in 1890 and lived for most of his remaining years at "The Anchorage," near Sandy Springs, Md. He died 30 September 1902.

Carrying the most modern antisubmarine detection and missile warfare gear, Jouett joins the fleet as a ready defender of freedom. Her motto, "Eternal Vigilance," serves as a reminder of the ship's mission in war and peace.

Upon completion of fitting out in February of 1967 Jouett was assigned to Cruiser-Destroyer Force, U.S. Pacific Fleet, and operated out of her home port, San Diego.