Randolph Mitchell Holder was born on 20 September 1918, in Jackson, Miss., to William D. and Annette A. [Limerick] Holder Jr. Following grade school, Randolph attended Mississippi State College [Mississippi State University], where he received a degree in Aeronautical Engineering. On 13 June 1939, in New Orleans, La., he enlisted in the U.S. Naval Reserve as a seaman second class. Two days later he reported for active duty service and set out for preliminary flight training at the Naval Reserve Aviation Base, Miami, Fla., where he accepted an appointment as an aviation cadet on 3 August 1939. Later that month, on 28 August, Aviation Cadet Holder reported for flight training at Naval Air Station, Pensacola, Fla., and following several months of training finally received his aviator wings on 27 February 1940. He was commissioned as an ensign on 10 April of that same year.

After completing flight instruction, Ens. Holder reported for duty with Torpedo Squadron (VT) 6 on board the aircraft carrier Enterprise (CV-6) operating in the Pacific. With tensions heightening in that area, Enterprise, in Task Force 8, got underway for Wake Island on 28 November 1941 “under wartime conditions,” to deliver Grumman F4F-3 Wildcat fighters from Marine Fighting Squadron 211 to Wake Island. That mission, coupled with bad weather that delayed her return to Pearl Harbor, T.H., precluded Enterprise from being present during the Japanese attack on U.S. forces at Oahu.

Promoted on 28 May 1942, Lt. (j.g.) Holder still served with Torpedo Squadron (VT) 6 on board Enterprise, when U.S. and Japanese forces clashed at Midway (4–6 June 1942). When the battle opened on the morning of 4 June, Holder departed Enterprise in company with the rest of the Enterprise Air Group in order to intercept Japanese forces approaching Midway. Early in the action, Holder’s and the other 14 Douglas TBD-1 Devastators of VT-6, found themselves separated from their fighter escorts and as they approached their objective they found themselves overwhelmed by both enemy fighters and a barrage of anti-aircraft fire. Holder’s Navy Cross citation indicates that despite these forbidding odds he “pressed home his attack with relentless determination,” and “under unprecedented conditions.”

Holder’s plane along with ten others in his squadron were shot down during the attack, with only four making it out intact. His remains were never recovered and he was listed as missing in action on 4 June, and then officially declared deceased the following day. Holder was posthumously awarded the Navy Cross and the Purple Heart, and he is further entitled to the wear of the American Defense Service Medal with Fleet Clasp, the Asiatic-Pacific Area Campaign Medal, and the World War II Victory Medal.

In the weeks following her commissioning Holder made a brief trial run into the Gulf of Mexico and then departed Houston for her shakedown cruise in the area of Great Sound, Bermuda, British West Indies. The escort ship arrived at Great Sound on 6 February 1944, and began conducting rigorous daily exercises and drills in the area well into the next month. Finished with training on 20 March, Holder steamed to Charleston, S.C., arriving at the port there on the 22nd and receiving minor post-shakedown repairs. The following day she made the brief voyage to the Norfolk Navy Yard, Va., and received some additional maintenance work.

In the early morning hours of 24 March 1944, Holder got underway from Norfolk on her first wartime mission and joined company with Task Force (TF) 65 escorting convoy UGS 37 “to various North African and Mediterranean ports.” Shortly after departing, the escort ship proceeded independently to Lynnhaven Roads and at 0800 assumed a screening station near the southern flank of the convoy as it passed through the channel. Other escort ships in her company included Stanton (DE-247), Price (DE-332), and Strickland (DE-333). The day after the convoy’s departure from the East Coast, Holder directed a small two-masted schooner to “stand clear of the convoy on a southerly course,” and nothing further developed. The escort ship also conducted numerous firing drills en route.

On 8 April 1944, at approximately 0017, Holder left formation in order to divert a civilian Spanish ship from the path of the convoy. The ship had “all her lights burning” and was traveling on a course roughly opposite of UGS 37. In reflecting on the incident, Lt. Cmdr. Winthrop P. Buck, Holder’s new commanding officer, observed that it was “highly possible that she was estimating the size and course of the convoy and relaying the information to enemy forces.” He also added in his report that he believed steps should be taken to keep neutral shipping clear of Allied convoy lanes. The vessel was re-directed without incident.

On 9 April 1944, Holder passed through the straits of Gibraltar. The following morning at about 0913 the escort ship dropped a depth charge after making a suspicious underwater contact, which was later determined to be a “school of fish.” Despite the benign nature of the incident Holder’s excitement for the day had only just begun. As night fell Holder, located at roughly 37°03'N, 03°58'E, was steaming at 8.5 knots under clear moonlit skies when several miles distant a bright “flare or rocket,” lit up the night sky. Seconds later, at about 2320, the general alarm sounded and Holder’s crew rushed to their battle stations.

At 2323, radar picked up an unidentified object 17 miles from the ships, but lost it shortly thereafter. Lt. Cmdr. Buck gave the order to “make smoke,” and then just minutes later, a plane, which was not positively identified, but believed to be a Junkers Ju 88D-1 [4N+EH] appeared a short way off the port beam. All of Holder’s guns capable of targeting the plane opened fire, but the aircraft still managed to launch a torpedo at a range of approximately 300 to 400 yards. Holder’s crew reported observed a “clearly visible wake” and Lt. Cmdr. Buck immediately ordered flank speed with a full left rudder. At approximately 2340, before the order to increase speed had taken affect, the aerial torpedo struck port side, amidships, just below the waterline, resulting in two distinct explosions. As Lt. Cmdr. Buck later recounted “A single torpedo, sent streaking across moonlit Mediterranean waters… turned the vessel’s first wartime mission into her last.”

Almost instantaneously, Holder took on a 4° list to her starboard side. All the lights on the ship were extinguished, depth charges were set on safe, and sailors rushed to compartment B3 to aid in putting out an oil fire; a task, which they eventually accomplished with the help of copious amounts of foam, as water pressure on the vessel had been lost. The ship’s “TBS receiver,” had gone down, cutting out communications, several compartments were flooded, and holder was dead in the water. During this time a number of merchant ships passed her on both sides but Holder’s crew remained steadfast at their battles stations. In all the gun crews expended 200 rounds of 40-millimeter and 2,000 rounds of 20-millimeter attempting to hit their German attacker; and, although hits on the enemy plane had been reported none were confirmed.

Just after midnight on 11 April 1944, the escort ship Forster (DE-334) arrived alongside Holder and twelve seriously wounded men were transferred over to Forster. At 0100, the British rescue tug HMS Mindful began towing Holder to Algiers. The escort ship Price (DE-332) which, had arrived just a few moments prior to their departure, took up a screening station near the wounded Holder. At about 1020, Holder and her rescuers arrived at their destination, with Holder tying up, starboard side, to the dock in Oran, Algiers. In all, 16 men were reported killed or missing and 13 seriously injured. Several of the fallen crew members who had died in the flooded compartments were buried at El Alia cemetery, Oued Smar, Algeria.

An inspection of Holder’s damage, found the escort ship to still be watertight enough to make the trip back to the United States. In order to get her in shape for the voyage a number of repairs were effected by French contractors from 12 April to 11 May 1944. On the morning of the 24th, Holder got underway with a skeleton crew in the tow of the fleet tug Choctaw (AT-70). At 1415, Holder joined with convoy GUS 40, as unit no. 96, bound for the New York Navy Yard, Brooklyn, N.Y.

Holder arrived at the New York Navy Yard on 9 June 1944, and awaited her turn for repair. Following an extensive appraisal Holder’s damage was ultimately deemed to be too great to “permit satisfactory repair,” and the escort ship was decommissioned on 13 September 1944, at the New York Navy Yard. Shortly thereafter, while in dry dock at New York, Holder’s stern section was cut off and moved on skids for grafting to the escort ship Menges (DE-320), which, while also performing convoy duty in the Mediterranean, had been struck astern on 3 May 1944 by an acoustic torpedo. 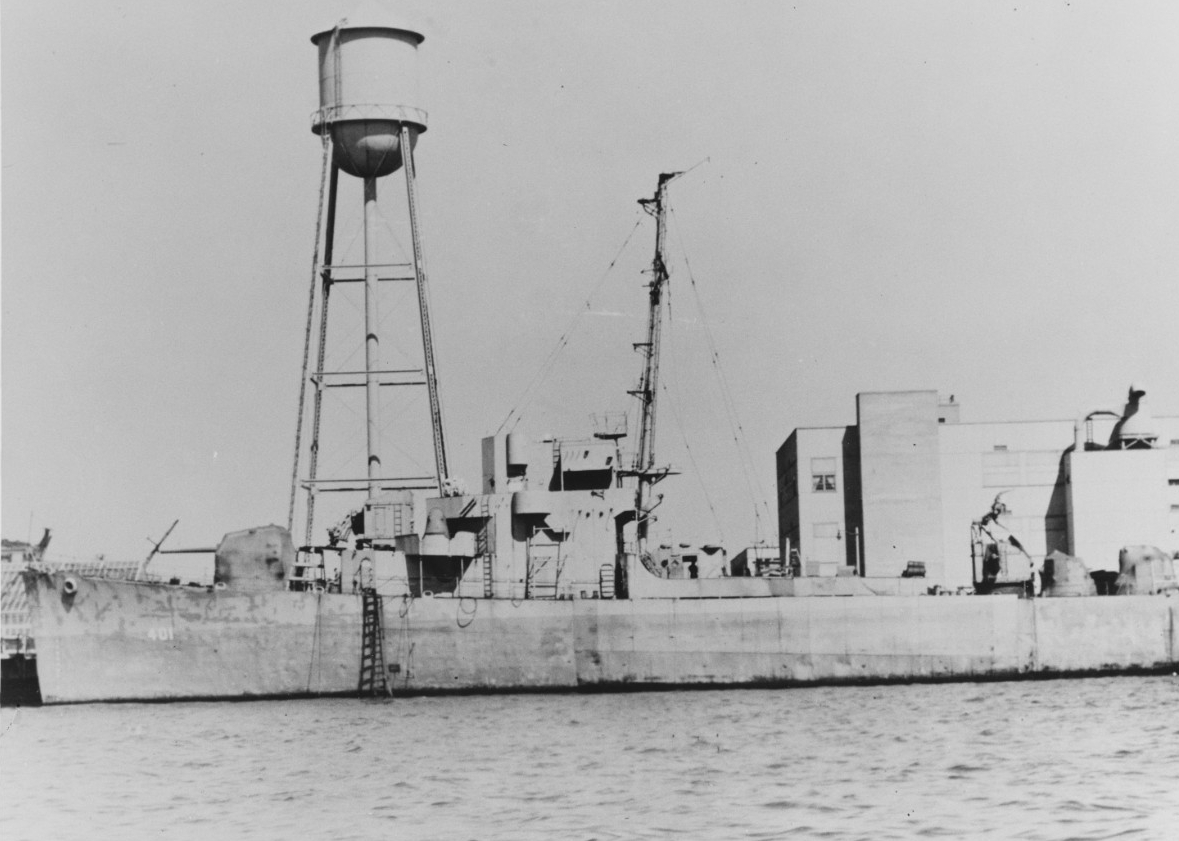 Caption: Holder’s patched hulk, showing an interesting array of equipment ranging from 5-inch/38 gun to Mk. 33 and Mk. 37 directors, with which she was never equipped during her active service, prior to being sold for scrap in 1947. (Naval History and Heritage Command Photograph NH 81348)

Holder was awarded one battle star for her World War II service.