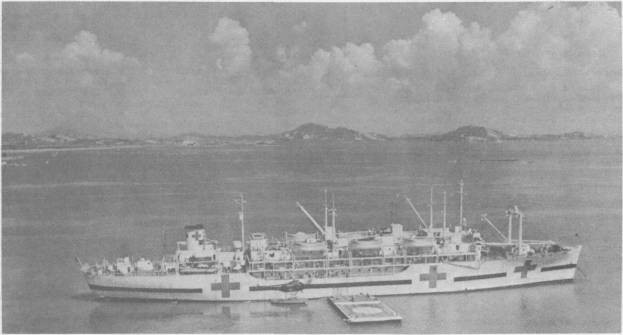 Haven was given a name in keeping with the mission of hospital ships.

Marine Hawk was laid down on 1 July 1943 at Chester, Pa., by Sun Shipbuilding & Dry Dock Corp., under a Maritime Commission contract (M.C. Hull 743); launched on 24 June 1944; sponsored by Mrs. E. Lang; renamed Haven and designated as a hospital ship, AH-12, acquired and placed in service 15-19 June 1944 for transportation to her conversion yard, Todd-Erie Shipyard, Brooklyn. Upon completion of her conversion to Navy use, she was commissioned on 5 May 1945, Capt. Theodore T. Patterson in command.

Following shakedown training, the hospital ship sailed on 14 June 1945 via the Panama Canal for the Pacific Theater, where the war was reaching its climax. Reaching Pearl Harbor on 6 July the ship brought patients on board for return to San Francisco, California. After returning to the Territory of Hawaii on 11 August, just prior to the Japanese surrender, Haven sailed to Okinawa and Nagasaki. She arrived off the destroyed Japanese city on 11 September and brought on board a group of Allied ex-prisoners of war, some of them suffering from the effects of the atomic blast. During the remainder of 1945 the ship transported patients from Guam, Saipan, and Pearl Harbor to San Francisco, arriving after her second long voyage on 31 January 1946.

At San Francisco, Haven took on board radiological equipment and embarked scientific researchers in preparation for the forthcoming atomic tests in the Pacific, Operation Crossroads. She sailed on 29 May 1946 for Pearl Harbor and arrived at Bikini Atoll on 12 June, operating temporarily as APH-112. The ship remained in the test area supervising the medical aspects of the experiments throughout the operation, and arrived Kwajalein 26 August to assist in the inspection of the test ships.

Haven departed on 10 October 1946 for Pearl Harbor and the United States, and upon her arrival and decontamination was assigned once again to transport troops from the Pacific outposts to California as AH-12. This important duty occupied her until February 1947, when she reported to San Diego and was decommissioned on 1 July. Haven entered the Pacific Reserve Fleet, San Diego group.

With the outbreak of the Korean War in June 1950, hospital ships were desperately needed. Following the sinking of sister ship Benevolence (AH-13) off fog-bound San Francisco after a collision with a civlian freighter in August 1950, Haven was taken out of reserve and commissioned on 15 September 1950. She sailed on 25 September via Pearl Harbor for Inchon, Korea, where she cared for casualties until 6 January 1951, when the changing tide of war forced her to move further south. She steamed via Pusan to Sasebo, Japan.

Haven returned to Pusan on 5 February 1951 to care for battle casualties, and after another voyage to Inchon remained at Pusan until she sailed for the U.S., arriving at San Francisco on 30 October 1951. She began her second tour of Korean duty on 7 January 1952, and operated off Inchon and Pusan during the months that followed, receiving many of her patients by helicopter directly from the front lines. Haven sailed again for the United States on 16 September 1952, and, after the installation of a new flight deck to facilitate helicopter evacuation of patients, once more steamed out of San Diego on 24 January 1953. She returned to her regular station in Inchon harbor where during the next seven months she treated almost 3,000 patients.

The veteran hospital ship sailed for the U.S. on 20 August 1953, following the Korean Armistice, and, after her arrival at San Francisco on 3 September, operated off the coast of California. She began her fourth tour of duty in Korean waters on 4 January 1954, arriving at Inchon on 7 February to provide regular medical care for troops. Haven also made occasional visits to Japan; and on 1 September with Korea in a state of uneasy truce, she was ordered to French Indochina, arriving at Saigon on 9 September. There she embarked French troops as Vietnam was partitioned and the French Army withdrawn. Haven sailed to Oran and Marseille in October to disembark the soldiers, and completing her circumnavigation of the globe, arriving at Long Beach via the Panama Canal on 1 November 1954.

Haven took part in fleet maneuvers and provided hospital services for sailors through 1955 and 1956 and was decommissioned at Long Beach on 30 June 1957.  Placed in an "In Reserve, In Service" status, she remained moored at Long Beach, providing medical services to the Pacific Fleet, until 1 March 1967 when she was stricken from the Naval Vessel Register.

Haven was returned to the Maritime Administration on 5 June 1967, entering the National Defense Reserve Fleet at Suisun Bay, Calif., at 1:00 p.m. that afternoon. Her title transferred to Union Carbide Corp. in exchange for the ship Pleiades at noon on 12 January 1968, Haven was transferred to the Union Carbide Corp. at Suisun Bay at 10:40 a,.m. on 9 February 1968 to be converted to a chemical tanker. Renamed Clendenin in October 1968, she was transferred from Union Carbide to Morgan Guaranty Trust Co. of New York, N.Y. on 21 April 1969 and renamed Alaskan less than one month later on 16 May 1969. Transferred from Morgan Guaranty Trust Co. back to Union Carbide on 26 June 1986, Alaskan was broken up between March 1987 and 10 December 1988.