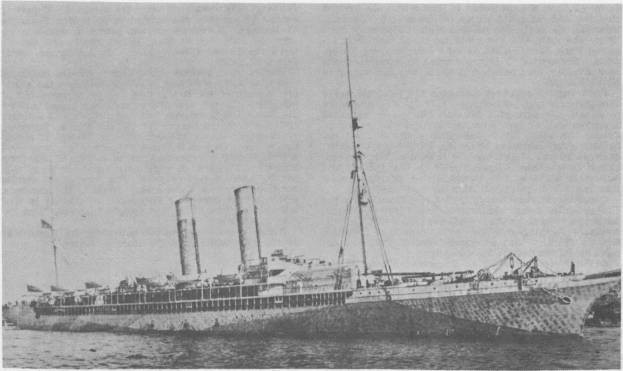 The capital of Pennsylvania.

Harrisburg, a troop transport, was built as a steel threemasted schooner in 1888 as City of Paris by J. & G. Thompson, Clydebank, Scotland, for the Inman Line. With her sister ship, City of New York (later to become Harvard) she was one of the finest transatlantic liners of the day, and one of the first ships with twin screws on that service. City of Paris was transferred to American registry in 1893 as Paris, and held the record for the Southampton-New York crossing in July 1893.

At the outbreak of the Spanish-American War in 1898, Paris was acquired by the Navy as an auxiliary cruiser, and commissioned Yale 2 May 1898, Captain W. C. Wise commanding. Sent to Puerto Rico to watch for the entrance of the Spanish fleet into the Caribbean, Yale patrolled those waters until putting in at Key West, Fla., 3 July. During this period she captured Spanish merchantman Rita and was fired upon by Spanish ships off San Juan. Subsequently, she was used by the Army to transport troops to and from Puerto Rico. Yale departed Charleston, S.C., 8 July, sailed to Puerto Rico, and arrived at New York 1 August. She decommissioned 2 September 1898 and was returned to the American Line, from whom she had been leased.

Reverting to Paris, the sleek ship again sailed the Atlantic, but had the misfortune to run aground on the Manacles, England, 21 May 1899. She remained there until 11 July, when she was reloaded and sent to Belfast, Ireland, for extensive refit. Paris emerged from Belfast with two funnels instead of her original three and powerful new engines. Renamed Philadelphia, she continued her transatlantic passenger service.

Philadelphia was acquired by the Navy in 1918 and renamed Harrisburg. She commissioned 29 May 1918, Comdr. Wallace Bertholf commanding. During the war Harrisburg made four voyages to Europe, two to Liverpool and two to Brest, with troops and supplies, and made six additional trips after the war carrying veterans of the European fighting home to the United States. She was then decommissioned at Hoboken, N.J., 25 September 1919, and returned to her owner, the American Line, for passenger service. She was subsequently sold to the New York-Naples Steamship Co. in 1922 and scrapped in 1923.