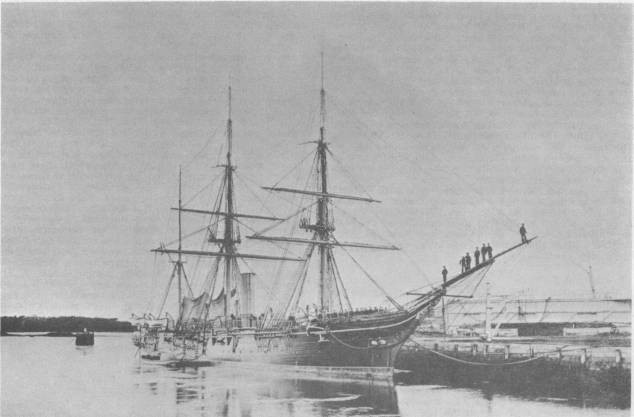 Cities in Kansas and Illinois; towns in Maryland and Missouri; and villages in Ohio and Alaska named for a native lead sulfide, the chief ore of lead.

Galena, one of the first three ironclads, each of a different design, built by the Union Navy during the Civil War, was towed from New York to arrive off Fortress Monroe, Va., 24 April and join Flag Officer L. M. Goldsborough's North Atlantic Blockading Squadron. Comdr. John Rodgers relieved Comdr. Taylor the same day.

Galena cleared her decks for action 4 and 7 May when dreaded Confederate ironclad Virginia briefly appeared. On 8 May Galena stood up the James River with gunboats Port Royal and Aroostook in an attempt to reach Richmond and compel its surrender. They silenced an

After the feared Virginia was destroyed, Monitor and Naugatuck joined the expedition at James Island on 12 May and on the 13th the force steamed across Harrison's Bar to City Point, where Galena stopped two steamers for evidence of contraband. She opened fire the following morning to scatter Confederate sharpshooters waiting in ambush along the river banks. On 15 May she stood up river leading the expedition to Drewry's Bluff, about 8 miles from Richmond. Galena was hit twice as she swung to bear her broadside guns on a Confederate battery. She nearly silenced the battery before her shells were expended, but then the Confederate guns opened upon her with terrible effect. Numerous hits perforated her iron-clad sides with 12 killed and 15 wounded.

She returned down river to City Point. The following days were spent in shelling Confederate soldiers along the river banks and destroying City Point buildings in which Confederates were entrenched. On 27 June 1862 Galena bombarded City Point while two boats went ashore with a landing force which set fire to the depots. That same day General McClellan came on board Galena to make a reconnaissance for the position of a new camp which was subsequently established near Harrison's Landing. On 30 June 1862 Major General McClellan was compelled to withdraw down the James and escaped disaster through naval gunfire support and transportation.

On 6 July 1862 Commodore Charles Wilkes was ordered to command the James River Flotilla, Galena included, as an independent division of the North Atlantic Blockading

Squadron. With gunboats of the flotilla, Galena afforded protection to the daily movement of Army transports and supply ships along the James River from Harrison's Bay to the mouth of the Chickahominy, giving the indispensable protection that left the Confederate troops without ability to move effectively against Mc-Clellan's Army of the Potomac along the James River.

Galena was detached from the James River Flotilla in September 1862 and assigned picket duty at Hampton Roads and Newport News until 21 May 1863 when she arrived at Philadelphia and was decommissioned for repairs. Her ineffective iron plating which had been so badly shattered in the action at Drewry's Bluff was stripped off; and she was overhauled to operate as a wooden-hulled ship.

Recommissioned 15 February 1864, Galena stood down the river on the 18th for the Gulf of Mexico. Becoming icebound at New Castle, Del., she was towed out to sea by an ice boat, then developed leaks which forced her to put in at Norfolk. She then proceeded to Baltimore for repairs. Galena put to sea from Norfolk on 10 May and joined the West Gulf Blockading Squadron at Pensacola, Fla., on 20 May 1865 for blockade duty off Mobile, Ala., that included the shelling of Fort Morgan and firing upon various blockade runners near the fort.

Galena was a unit of Admiral Farragut's fleet in the Battle of Mobile Bay on 5 August 1864. Passing through the narrow channel under heavy fire from Forts Morgan and Gaines, Galena, lashed to the port side of Onieda, suffered seven hits and one man killed before she entered Mobile Bay for a gallant fleet action of about 3 hours that left 165 Union dead and 170 wounded while the Confederate losses were 12 killed and 20 wounded. Union monitor Tecumseh was destroyed by torpedo in the channel and Confederate ram Tennessee and gunboat Selma fell into Union hands. Galena used her power to pass both herself and Oneida beyond range of the fort's fire when the latter had her starboard boiler put out of commission by a shell hit. Admiral Farragut wrote concerning the battle: "Notwithstanding the loss of life, particularly to this ship (Hartford), and the terrible disaster to the Tecumseh, the result of the fight was a glorious victory, and I have reason to feel proud of the officers, seamen, and Marines of the squadron under my command."

Galena provided supporting bombardment for the capture of Fort Morgan on 23 August 1864 and departed Mobile Bay on the 31st to serve as a part of the East Gulf Blockading Squadron out of Key West, Fla. She arrived in Philadelphia from her blockade station on 4 November 1864 and was decommissioned for repair on the 22d.

Galena was recommissioned at Philadelphia on 29 March 1865 and reached Newport News, Va., 2 April to serve the North Atlantic Squadron as a picket and patrol ship at the mouth of the Nansemond River and in the James River until her departure 5 June for Portsmouth, N.H. She was decommissioned there 17 June 1865 and remained inactive until recommissioned 9 April 1869 for movement to Hampton Roads, where she was placed out of commission 2 June. Condemned by survey in 1870, Galena was broken up in 1872 at the Norfolk Navy Yard.