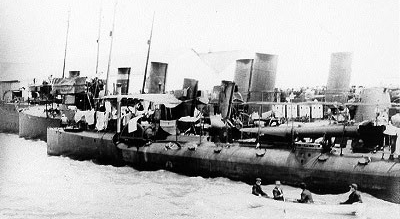 The ship incurred a four month delay in her construction in order to obtain suitable engineering equipment “due to high rate of speed required, but not to inherent defects.” Farragut carried out her final sea trials on 16 June 1898, and the Navy accepted her on 3 July. 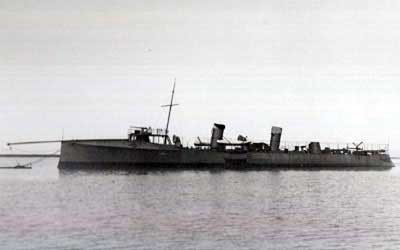 Farragut accomplished target and torpedo practice between Mare Island Navy Yard and Sausalito in San Francisco Bay, broken by occasional voyages southward to San Diego, Calif. She was decommissioned at Mare Island on 4 September 1902, and placed in commission in reserve on 8 October 1904.

The torpedo boat was restored to full commission at Mare Island for duty with the Pacific Torpedo Fleet on 23 March 1908, Lt. Martin K. Metcalf in command. She resumed her operations along the coast of California, and also participated in the Portland Rose Festival, Portland, Ore. (30 May–10 June 1908). The ship trained off the west coast through the remainder of the year, and conducted target practice on 23 April 1909. Farragut was placed in reserve at Mare Island on 17 September 1909. 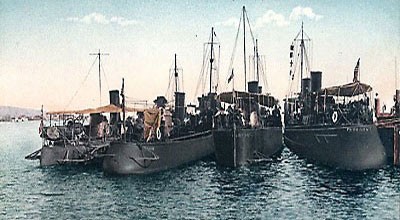 She then became involved in a debate concerning the proposed reorganization of the Navy to improve efficiency. Rear Adm. Washington L. Capps, Chief Constructor, Bureau of Construction and Repair, testified before the House Committee on Naval Affairs concerning delays and expenses incurred by ships undergoing maintenance, on 26 January 1910. Capps explained that on 29 September 1909, men working on Farragut discovered a defect in a drum in one of her boilers. The Inspector of Machinery recommended that the Bureau of Steam Engineering rivet the defective weld, but the bureau disapproved the recommendation and directed the installation of a new drum. The Navy Yard did not possess the material, but the Naval Constructor-Manager recommended purchasing one from Union Iron Works, which had built Farragut and lay only 30 miles away. The ship subsequently accomplished her repairs, but the comparatively simple work escalated in cost and time.

Recommissioned at Mare Island on 10 May 1911, Ens. Henry R. Keller in command, Farragut operated primarily with the Pacific Torpedo Flotilla in the San Francisco area, aside from a cruise to Bremerton, Wash. (15 July-6 September). She was placed in First Reserve with the Reserve Torpedo Group at Mare Island on 1 June 1912, and Ens. Claude S. Gillette relieved Lt. Keller as the commanding officer on 6 June.

Farragut was placed in ordinary with the Reserve Torpedo Division at Mare Island on 26 March 1914, and then served as a training ship in the San Pedro Division of the California Naval Militia (12 January 1915-14 April 1917).

Following America’s entry into World War I, Farragut returned to full commission on 14 April 1917. She sailed for the Panama Canal Zone on 11 July 1917, and during the war patrolled both the Atlantic and Pacific entrances to the canal, and carried troops and supplies in the Balboa area.