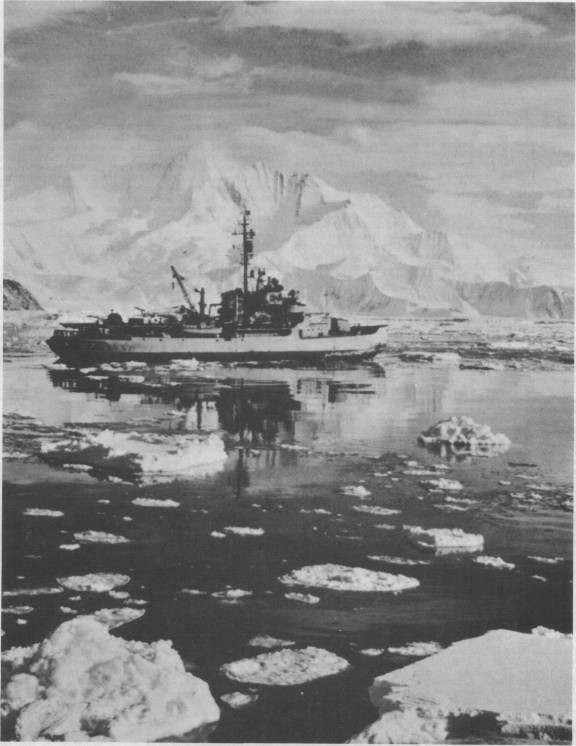 An island in a river of the same name about 20 miles south of Charleston, S.C.

Edisto (CVE-41) was transferred under lend lease to the United Kingdom 7 September 1943 prior to commissioning. After serving as HMS Nabob she was returned to United States custody and sold 26 October 1946.

Edisto sailed for the east coast 11 April 1947 to shake down. During a training cruise to Greenland that summer she crossed the Arctic Circle for the first of many times in her career. Upon return to Boston, she was assigned to TF 39 for the Second Antarctic Development Project. She sailed 1 November for a rendezvous via Panama with Burton Island (AG-88) at Samoa. Together they ventured south into the Ross Sea. Edisto trained sailors and tested cold weather equipment, and investigated installations and equipment left by Operation "Highjump," the previous year. The data she collected might be the key to understanding geographic, hydrographic, photographic, oceanographic, meteorological, and electromagnetic conditions in south polar regions.

Returning to Boston 31 March 1948, Edisto immediately began preparations for summer in the far north. Her task force resupplied weather stations at Thule and on Ellesmere and Ellif Rengnes Islands. The ships did reconnaissance to establish additional weather stations, trained men in cold-weather operations, tested equipment and collected a variety of data. Except for brief repairs in Boston when ice had snapped a propeller shaft, Edisto continued this grueling grind until 25 September 1948.

Edisto's next cruise to the north was purely exploratory. Not even waiting for summer, she went out of Boston 24 January 1949, to determine how much an icebreaker would be limited by the foul Arctic storms and lowest temperature. She weathered extreme subzero conditions and returned proudly to Boston 25 March.

From 1949 through 1960, Edisto continued her indispensable support to exploration in both Arctic and Antarctic. She supplied bases, reported ice packs and floes; took part in oceanographic, hydrographic, geological, coast and geodetic, and hydrophone surveys and Arctic convoy exercises.