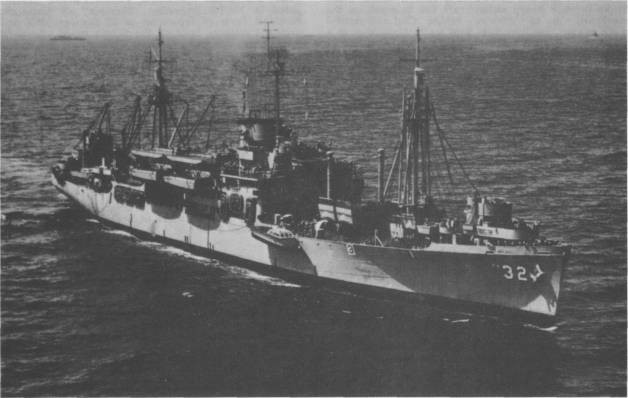 A county in Maryland.

The second Calvert (AP-65) was launched 22 May 1942 as Del Orleans by Bethlehem-Sparrows Point Shipyard, Inc., under a Maritime Commission contract; sponsored by Mrs. M. G. Fitch; acquired by the Navy 30 September 1942; and commissioned the next day, Captain D. W. Loomis in command. She was reclassified APA-32, 1 February 1943.

Calvert began the consistently superior service which was to win her a Navy Unit Commendation when she sailed from Norfolk 25 October 1942 for the invasion of North Africa. She competently landed her troops at San, French Morocco on 8 November, and 6 days later sailed for Norfolk to train troops in Chesapeake Bay for other invasions. On 8 June 1943 she departed for the Mediterranean and her second major assault landing, at Scoglittli, Sicily, where she skillfully put her troops ashore on 12 July.

By 3 August 1943, Calvert was back at Norfolk, a veteran of assault landings in the Atlantic, and now Pacific bound for stepping stone invasions to the Japanese homeland. She arrived at Pearl Harbor on 26 September to train and land troops of the 27th Division, USA, on Makin, Gilbert Islands, 20 November. Her busy schedule took the transport back to the west coast the following month to train troops for forthcoming amphibious assaults, and in January 1944 she was underway for the Marshalls where on 1 February her troops stormed ashore on Kwajalein for another successful invasion.

Calvert's next well-planned, well-executed operation was in the Marianas where she conducted diversionary landings off Tanapag Harbor at Saipan (15-24 June) and Tinian (24 July), an effort which added immeasurably to the success of the main assault. She returned to Pearl Harbor in August carrying 420 Japanese and Korean prisoners of war, and the following month was again westward bound to take part in the all-important invasion of the Philippines.

On 20 October 1944 Calvert was off Leyte dispatching her troops for the initial landings. She made a quick turn around and was back on 18 November to pour more men and equipment from New Guinea into the Philippines to ensure the Allied advance. At Cape Gloucester she embarked troops for another assault on the Philippines (9 January 1945) at Lingayen Gulf to begin the capture of Luzon. The following month, with troops embarked at Biak, Calvert successfully landed her assault waves at Mindoro on 9 February. The veteran Calvert was now ordered to the west coast for overhaul and conversion to an amphibious flagship, arriving Bremerton 26 March.

Calvert completed her conversion as the war ended in the Pacific, and on 24 August 1945 cleared for the Philippines to lift troops to Hiro Wan for the occupation of Japan. "Magic Carpet" duty, returning troops home to the west coast, was her assignment between 7 November 1945 and 31 May 1946 prior to arrival at Norfolk where she was placed out of commission in reserve 26 February 1947.

With the outbreak of war in Korea in the summer of 1950 Calvert was recalled to active service and recommissioned 18 October 1950. During her two tours in the Far East she trained troops in Japan and Korea, redeployed Korean troops, and transported troops to and from Korea from the west coast. Following this war Calvert remained on active service with the fleet, alternating west coast operations with cruises to the western Pacific. During this service she took part in the "Passage to Freedom" operation in the summer of 1954 when she lifted over 6,000 Indochinese civilians from Communist-surrounded Haiphong to southern Viet Nam. In 1958 during the Middle East crisis and Lebanon landings by the 6th Fleet, Calvert, combat-loaded, stood ready with the 7th Fleet, alert for any extension of trouble in the Pacific. Alternating west coast operations with cruise to the western Pacific continued through 1960.