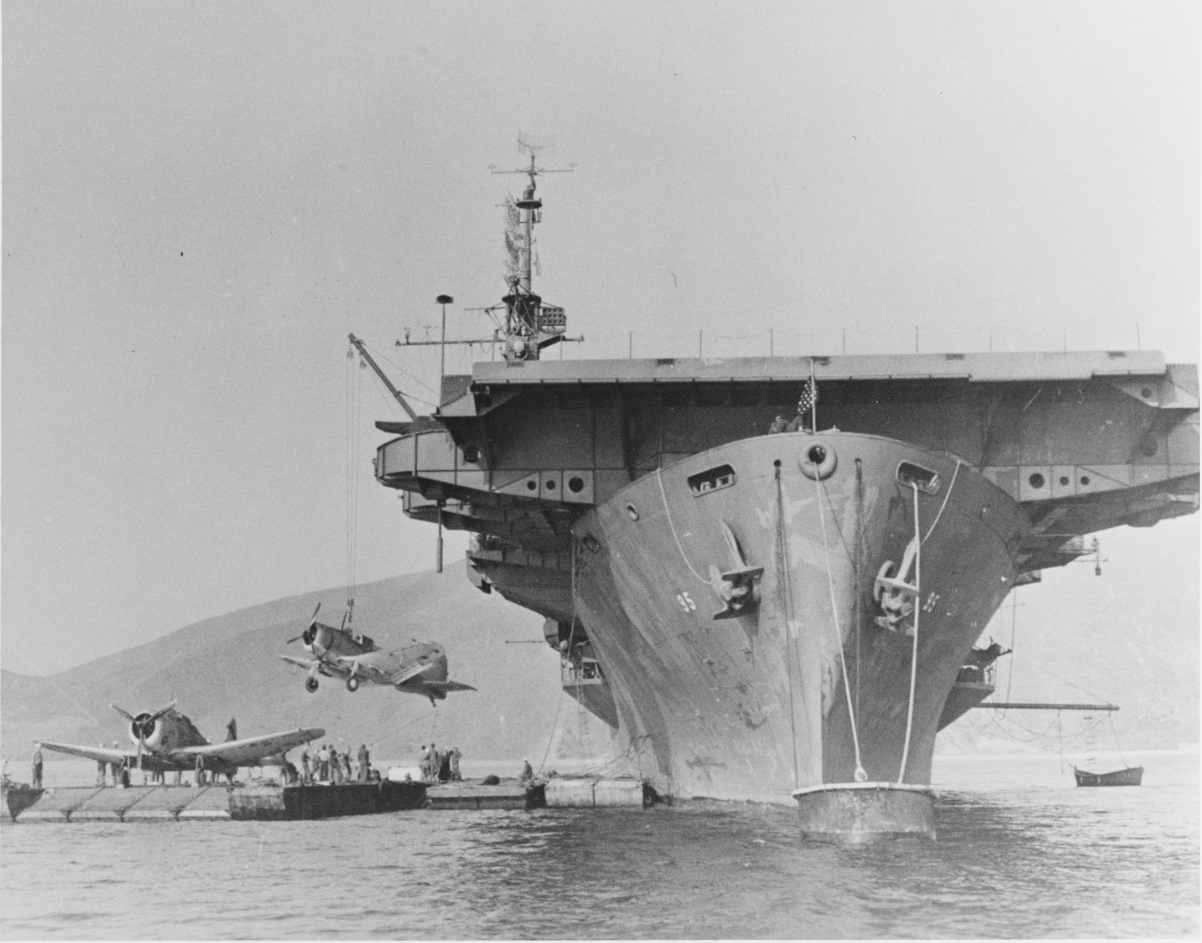 A body of water located northeast of New Guinea. It was the scene of an Allied naval victory during World War II.

On 28 February 1943, in an attempt to augment their forces on Papua, a Japanese convoy consisting of eight transports and eight destroyers departed Rabaul. Foul weather could not hide the convoy for long; and, on 1 March, one of Lt. Gen George C. Kenney's planes sighted it and began tracking it. By noon of 2 March, the Allies had attacked, sinking one transport and damaging two others. On 3 March, Allied bombers and PT boats demolished most of the remaining ships. From the entire convoy, only four destroyers escaped.

Following shakedown off the west coast in June, the escort carrier departed San Pedro, Calif., on 1 July with airplanes and pilots bound for Hawaii. After unloading at Pearl Harbor, Bismarck Sea continued westward to the Marshalls. She arrived at Majuro Atoll on 16 July, unloaded new planes and loaded damaged ones before steaming back to Pearl Harbor in company with Saginaw Bay (CVE-82). The two escort carriers arrived on 29 July; and, by early August, she was on her way back to San Diego for a four-week overhaul.

On 7 September, Bismarck Sea began flight operations and training off the California coast. This employment ended on 16 October when she sailed for Pearl Harbor. After a brief stop at Oahu, the escort carrier proceeded westward to Eniwetok where she reported for duty with the Seventh Fleet on 1 November.

Ordered to Ulithi the next day, Bismarck Sea remained there for ten days before being sent to Philippine waters to cover convoy movements east of Mindanao. There, on 21 November, a Japanese plane made a strafing run on the carrier without inflicting any damage and escaped to the northwest before her guns could bear effectively. Bismarck Sea then received orders to Manus in the Admiralty Islands to join Task Group (TG) 77.4. The ship anchored at Seeadler Harbor on 27 November and, during the ensuing month, conducted frequent flight exercises and gunnery practices east of Huon Gulf, New Guinea. Tasked with air support for the 6th Army's landing at Lingayen Gulf, TG 77.4 sailed for the Palaus on 27 December on the first leg of its approach for the invasion of Luzon.

On 4 January 1945, the task group suffered intermittent attacks by Japanese land-based airpower. The only enemy surface forces encountered were the destroyers Hinoki and Sugi that her lookouts sighted on 5 January near Luzon. Bismarck Sea sent out four torpedo planes and four fighters to join other naval air units in a strike on the two enemy warships. Together, they seriously damaged both destroyers. Although subjected to many enemy air attacks, one of which claimed Ommaney Bay (CVE-79) and wreaked other less fatal damage, TG 77.4 arrived off Luzon and launched daily support and search missions from dawn to dusk until 17 January when the task group headed for the Carolines.

At Ulithi, preparations for the assault and occupation of Iwo Jima were underway. Once again, Bismarck Sea operated as part of the escort carrier support force. The so called "baby flattops" of TG 52.2 departed Ulithi on 10 February, moved toward Iwo Jima, and arrived on station on 16 February. Bismarck Sea operated about 50 miles south of the island providing antiaircraft and antisubmarine patrols for the battleships, cruisers, and destroyers engaged in bombardment. At 0900 on 19 February, the first assault wave landed. The escort carriers then supplied observation and spotting planes, photographic flights, combat air patrol over the beaches, antisubmarine patrols, and strike missions for direct support of the troops. 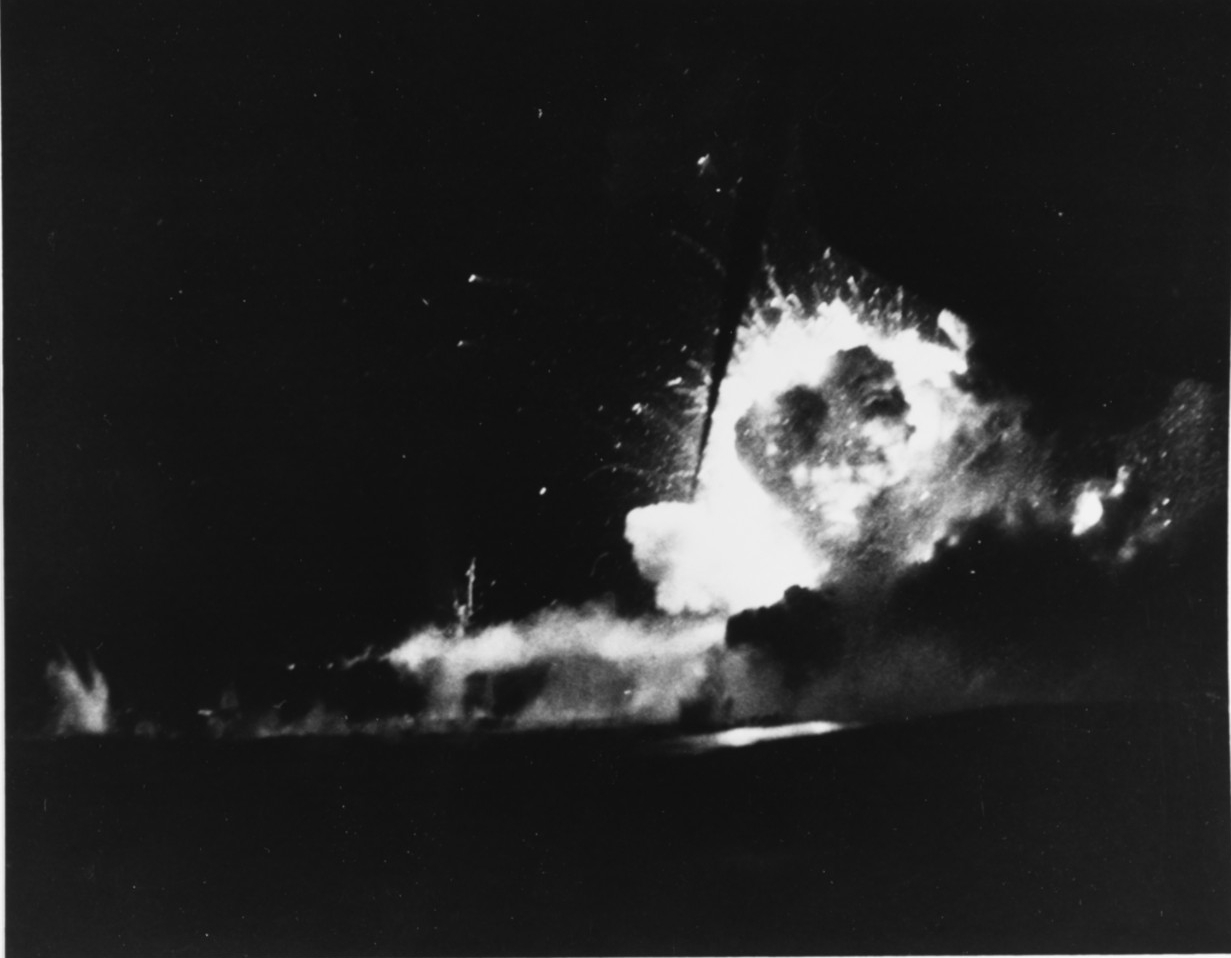 Large explosion on board Bismarck Sea (CVE-95), after she was hit by a kamikaze during the night of 21-22 February 1945, while she was taking part in the Iwo Jima operation. She sank as a result of her damage. Photographed from Saginaw Bay (CVE-82). Official U.S. Navy photograph now in the collections of the National Archives. Catalog#: 80-G-335103.

On the evening of 21 February, Bismarck Sea had just recovered her aircraft from a strike when a swarm of Japanese planes appeared. The escort carrier splashed one bomber, but another one crashed into the ship abeam of the after elevator. The crash knocked four torpedoes on to the hangar deck, parted the elevator cables, and damaged the after fire main. The fire appeared controllable until its glow attracted a second Japanese plane which also crashed her just forward of the elevator well, killing or mortally wounding the entire fire-fighting party. This explosion buckled bulkheads and collapsed the decks in the ammunition clipping rooms, adding fuel to the fire. The planes on the hangar deck added gasoline to the holocaust. Soon, the flames raged out of control and a variety of ordnance began to explode, so the captain ordered Bismarck Sea abandoned. In less than 30 minutes, her entire crew made it into the water. After many explosions and two hours of burning, the ship rolled over and sank.

Rough seas, cold water, and Japanese strafing cost the lives of many members of the escort carrier's crew. Three destroyers and three destroyer escorts spent 12 hours picking up survivors, but 318 gallant sailors were lost. The survivors were sent to transports just off Iwo Jima and were able to see the American flag finally raised on Mount Suribachi. Her name was stricken from the Navy List on 30 March 1945.