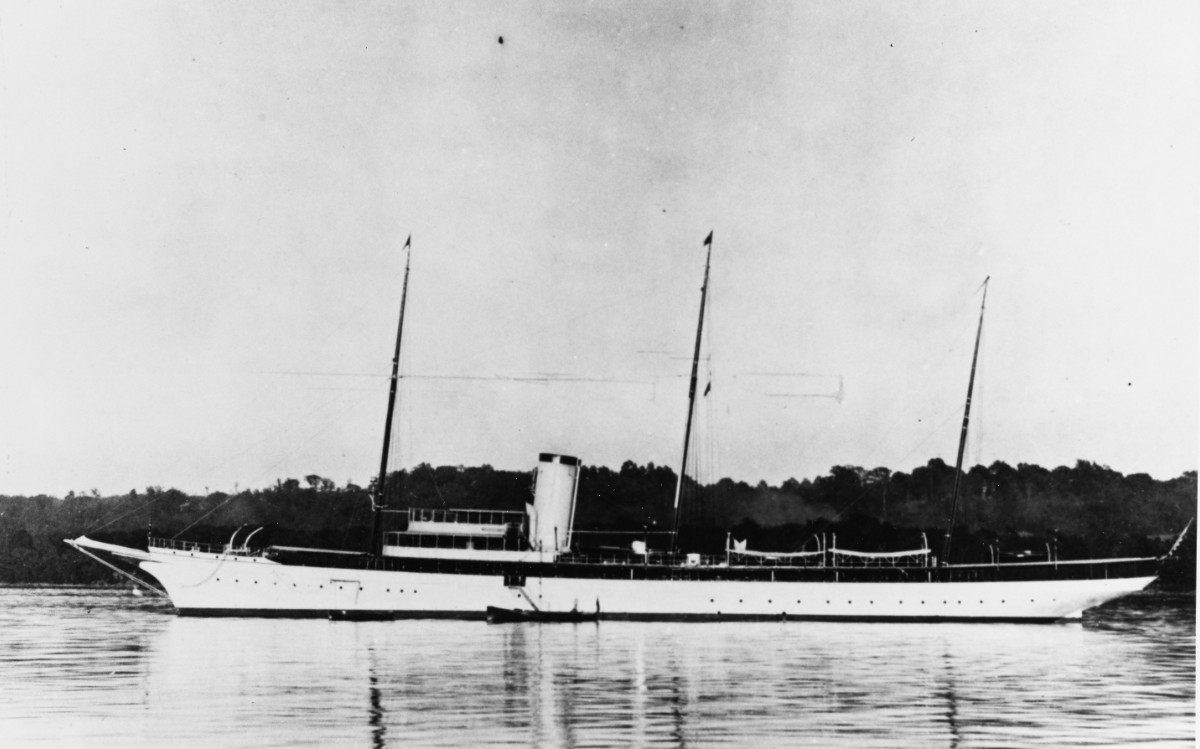 Caption: Aphrodite, built in 1899, photographed prior to her U.S. Navy service in World War I. Courtesy of Charles Sass, 1980. (Naval History and Heritage Command Photograph NH 91435)

Aphrodite departed St. Nazaire and arrived at Brest, in company with Corsair, on 1 July, and on the 13th, Capt. Fletcher reported that his patrol force would be ready for sea the following day. She began patrolling the Bay of Biscay shortly thereafter. Her duty consisted of escorting coastwise convoys and meeting in-bound convoys from America and seeing them safely into Brest, Verdon, or St. Nazaire. On one of her first patrols, her inexperience in the war zone showed. She reported picking up a suspicious object that was initially believed to be a submarine periscope. It turned out to be a floating spar.

Aphrodite, while on patrol on 4 September 1917, responded to an SOS from a vessel in distress. Changing course in response, the yacht came upon six men in a small boat from the sunken French fishing vessel Ker Durand No. 1176G which was attacked and sunk by UC-69 (Oberleutnant zur See Hugo Thielmann commanding) at 3:30 p.m. on 2 September. The six men were taken on board and provided food, water, clothing, and medical attention.

Ten days later, on 14 September 1917, the yacht was cruising as an escort for the transport Carib (Id. No. 1765). While underway, she encountered the eight survivors of the torpedoed British merchantman Vienna which had been sunk by U-49 (Kapitänleutnant Richard Hartmann) on 11 September. All were taken on board. Ordered to get underway in company with Corsair and Alcedo, Aphrodite steamed to sea on 19 September and rendezvoused with an inbound convoy and shepherded it into St. Nazaire the next day. She was again underway on 21 September, this time escorting outbound U.S. transports in company with Corsair and Alcedo. Standing out through the Channel du Nord from St. Nazaire, the ships were also escorted by four French airplanes and when they passed Belle Isle, they were escorted by two other French airplanes and a French dirigible.

The troop transports Henderson and Antilles and the storeship Willehead were anchored in Quiberon Bay on the morning of 15 October 1917. City of Atlanta (Id. No. 4703) was to join them later. 'The original escorts available were Corsair, Aphrodite, Wakiva II, Alcedo, and Kanawha, but Wakiva II was forced to remain behind on account of boiler trouble. Word having been received that the City of Atlanta would not be ready to leave St. Nazaire until the morning of the 16th, Aphrodite was left behind with orders to escort City of Atlanta when she was ready for sea. The convoy got underway at 3:52 p.m. on the 15th, stood out of Teignouse Channel, took formation, and began to zig-zag. During the escort on the 17th, the outbound Antilles was torpedoed and sunk by U-105 (Kapitänleutnant Friedrich Strackerjan). Meanwhile, Aphrodite conducted her escort of City of Atlanta with no incident.

Aphrodite, along with Smith (Destroyer No. 17) and Lamson (Destroyer No. 18), was dispatched on 30 November 1917 to intercept an inbound convoy. Rendezvousing at 11:45 p.m., the yacht and destroyers escorted the troopship President Lincoln through the Teignouse Channel into Quiberon, France, the next day. After completing the escorts set a course for a return to Brest. 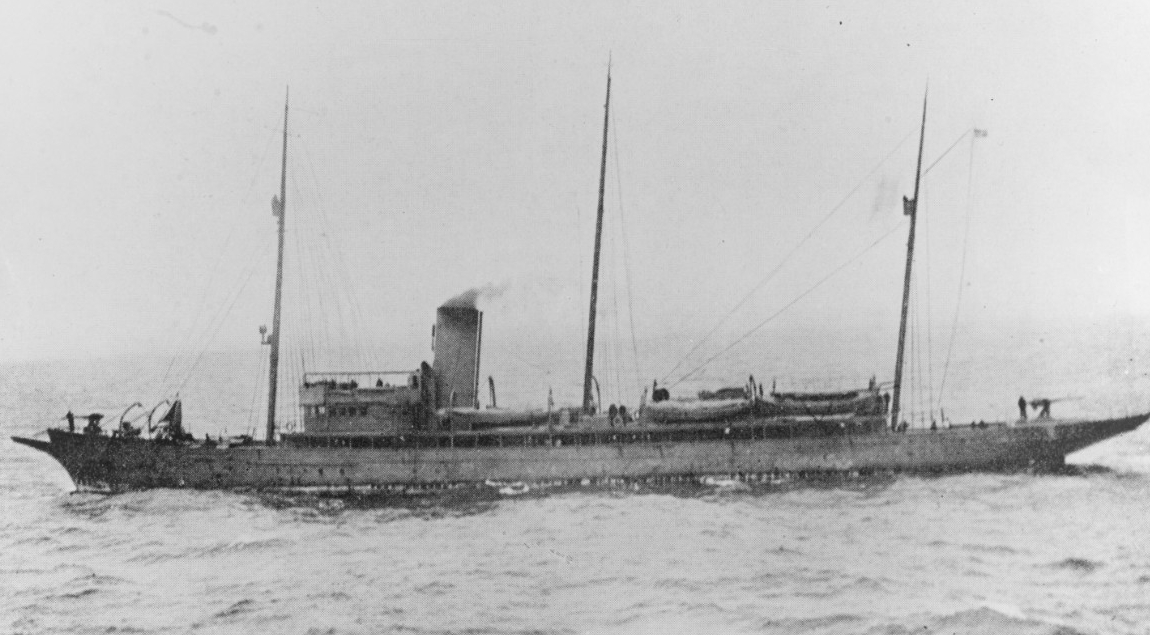 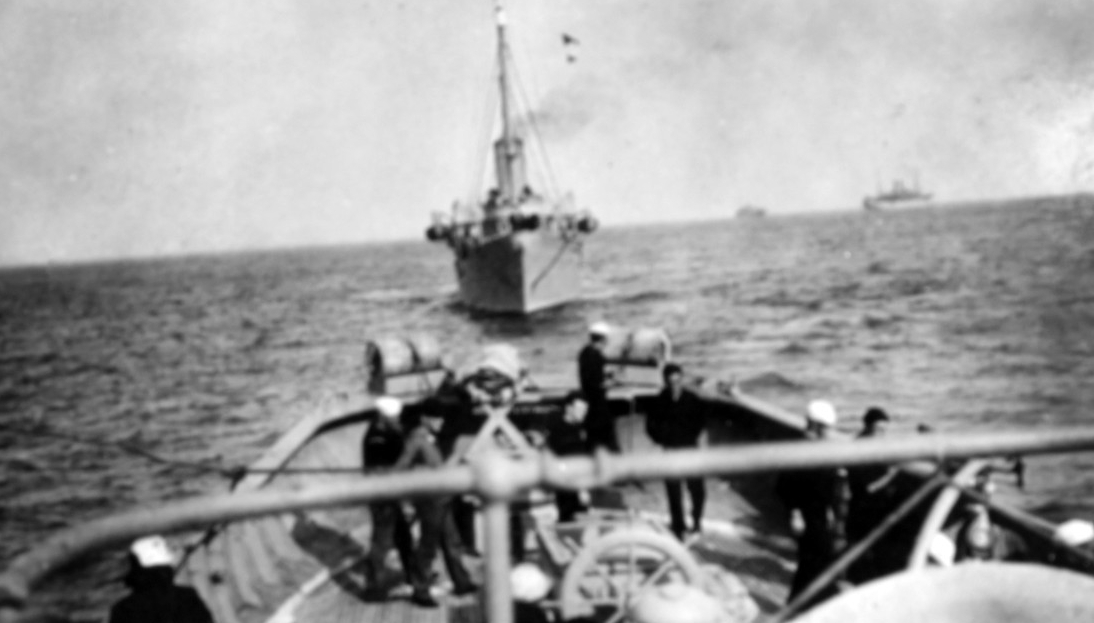 On 16 February 1918, Aphrodite was reassigned to Rochefort, France (Base No. 20), from whence she served as an offshore escort until March. The other yachts also re-assigned at that time included Corsair, Noma, Wakiva II, May (S. P. 164), and Nokomis (S. P. 609). These vessels were not sent simultaneously. First, certain of them were undergoing repairs incident to their continuous service since their arrival in Europe, and, second, they could not immediately be spared. Aphrodite got underway on 18 February as chief of escort for a 15 ship convoy. The additional escorts included Corsair and May along with the French ships Regulus and Adventurier. The convoy proceeded as ordered and at 10:00 a.m. on 20 February, dispersed. Aphrodite, Corsair, and May returned to Pauillac for coal and the French escorts shaped course for Brest.

On 25-28 February 1918, Aphrodite, Corsair, May, and the French ship Cassiope, escorted a 10-ship westbound convoy from Verdon.  The following month, on 10 March, while again escorting a westbound convoy (18 ships), Aphrodite spotted a floating German mine and opened fire on it. She fired thirty-five shots and never hit it. Corsair, on the other hand, sank it on her third shot. It did not explode, but after a hole was put through it, it filled with water and went down. Aphrodite and Corsair were again underway on 16-19 March, this time escorting a 17-ship westbound convoy with Nokomis and the French ships Marne and Rivoli. On 25 March 1918, Aphrodite reported that she had cracked her rudder post and stern post which would require two weeks repair at Bordeaux, France (Base No. 14). Three days later, on 28 March 1918, Aphrodite was assigned to Division 7, Squadron 3, Patrol Force, based at Verdon.

Steaming from her new base, on 24 April 1918, Aphrodite escorted another westbound convoy, 21-ships, with Corsair, Nokomis, Wakiva II, and Rivoli, then returned on the 27th, after completing the mission. She served as a convoy escort on the French coast for the remainder of the war. Vice Adm. William S. Sims, Commander, U.S. Naval Forces in European Waters, designated a special division of yachts under the command of Cmdr. Frederic N. Freeman on 17 October to be used primarily for escort of convoys along the French coast. The division consisted of Aphrodite, Corsair, Alcedo (S. P. 166), Wakiva II (S. P. 160), Noma, and Piqua (formerly Kanawha II).

After the armistice of 11 November 1918 ended hostilities, Secretary of the Navy Josephus Daniels wired Vice Adm. Sims that the yachts Aphrodite, Corsair, Cythera (S. P. 575), Noma, Rambler (S. P. 211), Sultana, Vedette, Harvard, and Piqua were free of their leases and should be returned to the U.S. if practicable. Despite this, Aphrodite received orders on 30 November directing her to proceed to Harwich, England and report to Rear Adm. Samuel S. Robison, Commander, Squadron Three, Patrol Force, for “such duty as may be assigned”. She cleared Brest the next day, 1 December, and served as a station ship at the British ports of Harwich and Portland. 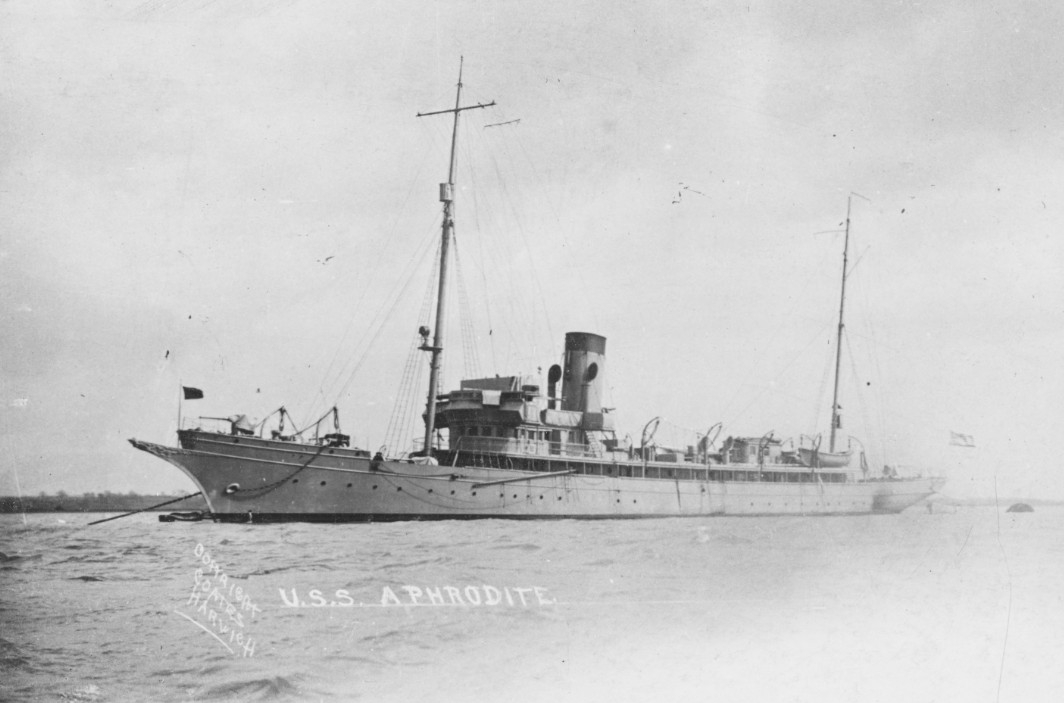 Caption: Aphrodite during her service as a station ship off Harwich, England, in late 1918-early 1919. Photographed by Coates, Harwich. The original photograph is printed on postcard stock. Donated by Dr. Mark Kulikowski, 2007. (Naval History and Heritage Command Photograph NH 104493)

On 10 January 1919, Aphrodite struck an anchored mine while en route to Germany, prompting the convening of a board of investigation on 11 January. Later, that same day she arrived at Wilhelmshaven, Germany. She then departed on the 13th, proceeding to Cuxhaven, Germany, she arrived on the 15th. After her time in Germany, she returned to England, arriving at Southampton on 22 February. Moving again to Harwich in March, Aphrodite and Chester (Scout Cruiser 1) rendered assistance to U.S. crews preparing to take the former German U-boats as war prizes, to the United States. After this duty, the yacht returned to Germany and served as the station ship at Hamburg.

Aphrodite received orders on 31 May 1919 to return to New York. Steaming from Harwich on 14 June, she returned to the United States via Brest; Ponta Delgada, Azores; and Bermuda, arriving at Tompkinsville [Staten Island], N.Y. (Base No. 21), on 30 June 1919. Aphrodite was placed out of commission at the Fleet Supply Base, Brooklyn, N.Y., on 12 July, and returned to her owner that same day.