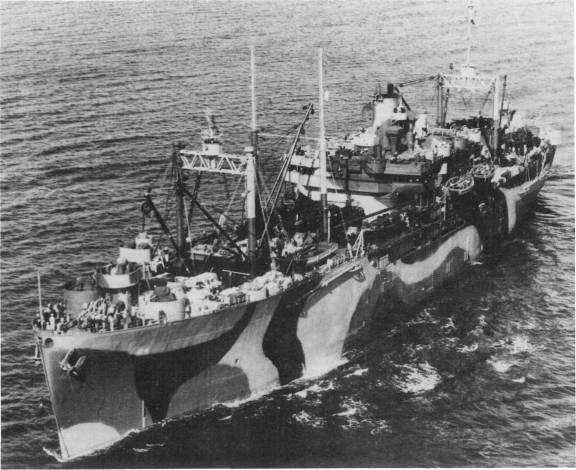 A Greek nymph who was honored in the name of a city in Boeotia on the shore of the Euripos Strait.

Following her commissioning, the submarine tender got underway for Brooklyn, N.Y., to load provisions and ammunition at the New York Navy Yard and then traveled to New London, Conn., to take on spare parts for submarines and to conduct tests and drills. She departed New London on 11 October and set a course for Australia. The ship transited the Panama Canal on 17 October and arrived at Fremantle on 17 November.

Anthedon spent three months at that port carrying out refits and voyage repairs on submarines returning from war patrols. The tender departed Fremantle on 12 February 1945; and made stops at Brisbane, Australia, and Hollandia, New Guinea, to pick up building material. She reached Subic Bay, Philippines, on 13 March, and remained there during the rest of the war, servicing numerous submarines as well as the destroyer escorts operating from Subic Bay.

After Japan capitulated in mid-August, the submarine tender got underway on the 31st to return to Fremantle. She reached that port on 10 September and assisted in the dismantling of the submarine repair unit located there. Anthedon departed Fremantle on 2 October to return to the Philippines; arrived at Subic Bay on 14 October; and began providing repair services to submarines. On 1 November, Anthedon weighed anchor to return, via the Hawaiian Islands and the Panama Canal, to New London. She transited the canal on 20 November and reached Norfolk, Va., on 5 December.

After discharging passengers and cargo, the tender continued on to New London. She spent one week there before moving to Bayonne, N.J., on 15 December to enter drydock for the repair of a crack in her hull. Anthedon was back in New London on 22 December.

During January and February 1946, the tender assisted submarines preparing for deactivation. On 1 March, Anthedon commenced deactivation herself, and she was placed out of commission, in reserve, at New London on 21 September 1946. Her name was struck from the Navy list sometime in late 1968 or early 1969. She was sold to Turkey on 7 February 1969 and served the Turkish Navy as Donatan (A-583).