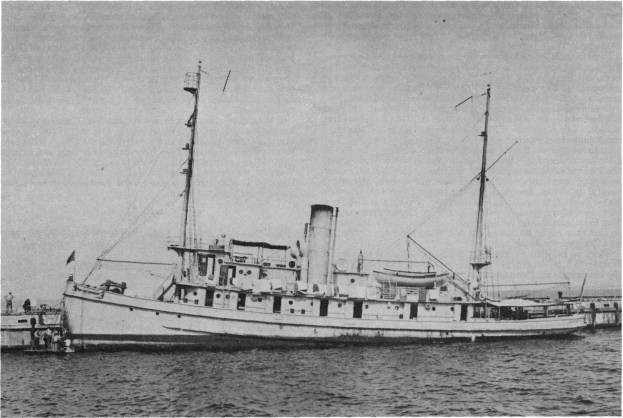 Caption: Allegheny (AT-19) circa 1921, probably at Pensacola; note awnings shading the deckhouse just forward of her stack and over the fantail, also the bedding airing amidships, and workmen engaged in making repairs to the ship's damaged bow. (NH 57792)

A river which rises in Potter County, Pa., and flows northwestward into southwestern New York before turning south to reenter Pennsylvania in Warren County. The stream then meanders southward through western Pennsylvania until joining the Monongahela at Pittsburg to form the Ohio. The word Allegheny is derived from the Delaware Indian name for the Allegheny and the Ohio Rivers.

The name Huron was initially assigned to Fleet Tug No. 19 on 28 July 1917; but, since that assignment conflicted with the name being considered for the former German steamship Friedrich der Grosse, the tug was renamed Allegheny on 1 September 1917. Launched on 18 October 1917 at the American Shipbuilding Co., Buffalo, N.Y., Allegheny was delivered to the Navy on 5 December 1917 and sailed for Boston, Chief Gunner C. A. Babson in charge. However, she only got as far as Cateau Landing, Quebec, Canada, before heavy ice on the St. Lawrence stopped navigation on the river until spring. Commissioned at Quebec on 18 May 1918, Allegheny, Lt. A. Wholtman in command, Allegheny resumed her voyage and arrived at Boston on 8 June.

Outfitted at the Atlantic Works, East Boston, the fleet tug-assigned to the Naval Overseas Transportation Service (NOTS) two days after her arrival, operated along the eastern seaboard with NOTS, performing tug and tow services until assigned to the Atlantic Fleet's Train on 4 February 1919. She operated out of New Orleans under Commander, Train, Atlantic Fleet, from March 1919 to April 1921. During this period, she was designated AT-19 on 17 July 1920. In the spring of 1921, she moved to the Naval Air Station (NAS) at Pensacola, Fla., to serve as station tug.

Early in that tour at NAS Pensacola, she was assisting Orion (AC-11) alongside a dock 5 July 1922, when the collier's port propeller holed the tug's starboard side. Flooding rapidly, Allegheny sank soon thereafter. Orion's propeller damage itself was trifling, and she proceeded on her appointed rounds. Naval air station personnel, using what equipment was on hand, raised Allegheny themselves by 22 July.

Returned to active service in November 1922, Allegheny resumed a routine as station tug at NAS, Pensacola, that continued for the next decade. Highlighting the ship's tour there: she plane-guarded for Langley (CV-1) in 1923, as that ship worked up in the waters around the air station; joined the tug Bay Spring (AT-60) in aiding survivors from the gunboat Tacoma (PG-32) stranded at Veracruz, Mexico, in late January 1924; and assisted in providing flood relief along the Mississippi River between 24 April and 5 June 1927. During the latter operation, she rescued passengers and crew from the sunken steamer Thomas R. Buckham on 21 May.

When war broke out in the Pacific on 7 December 1941, the Atlantic Fleet had already been engaged in de facto hostilities with the Axis since the previous spring. However, local defense forces for the 4th Naval District remained largely a "paper" force, spearheaded by Eagle 56 (PE-56), the 125-foot Coast Guard cutter Colfax, and Allegheny. Supporting these small ships was a group of 75-foot Coast Guard cutters.

Assigned to the section base at Cape May, N.J., on 18 February 1942, Allegheny was given the duties of station ship at the entrance to Delaware Bay. A small Coast Guard cutter and two boarding boats assisted her in carrying out this mission. During February, the tug assisted the British submarine Regent, which had been damaged while en route from Bermuda, to the Philadelphia Navy Yard for repairs. The evolution was not without moments of anxiety for all hands. The forces sent out to bring in Regent, during a period of heavy U-boat activity off the eastern seaboard, initially missed making contact and, once they had reached the scene, lost contact in the heavy weather. Boiler trouble had handicapped Allegheny at the outset; and, once at sea she sighted a hostile submarine which apparently chose to escape rather than to attack. Five days after setting out from the section base at Cape May, Allegheny got back to Cape Henlopen and then towed Regent to Philadelphia for repairs.

On 29 March 1942, the tanker SS Paulsboro broke her back 10 miles from Overfalls Lightship and sent out an SOS. Upon learning of the tanker's plight Allegheny labored through the heavy as 40-knot winds further hindered! her progress. However, a Coast Guard 83-footer stood by Paulsboro until the tug finally reached the scene and towed the tanker into port for repairs.

Then, on the afternoon of the 21st, with Allegheny still struggling to free the Liberty ship, the harbor entrance control post reported a ship afire, four or five miles away. The tanker SS Plattsburg Socony, loaded with 600,000 gallons of high octane aviation gasoline, had been rammed in the fog by the Liberty ship Charles Henderson. Ships from the waters nearby, Allegheny, the salvage tugs Resolute and Nancy Moran, some Coast Guard cutters, a boarding boat, an Army mine planter, and the French destroyer escort Senegalais, converged on the scene of the collision.

Allegheny's Sailors saw a flaming wake that stretched two miles downwind, astern of the holed tanker. Plattsburg Socony, herself, was a mass of flames. Her deck plating was so hot that it glowed. The tug, having been equipped with the latest in fire-fighting gear in 1943 and with her crew especially trained in techniques for dealing with a blaze at sea, approached behind a curtain of water and lay alongside to begin battling the blaze that threatened to destroy the tanker. She did so despite shouted warnings from the nearby Charles Henderson that Plattsburg Socony would more than likely blow up at any moment.

Allegheny radioed that she was alongside at 2007 with two streams of water being put on the blaze; within the hour her men were on board fighting the fire with four "fog" lines working in shifts in the tremendous heat. "No one rested," wrote the 4th Naval District's historian, "until tons of water thrown by the Allegheny's throbbing pumps had cooled the warped and burning decks . . . ."Her specially trained fire fighters had saved the ship. Leland Stanford, the ship Allegheny had attempted to free, meanwhile managed to get lose and proceeded on her way.

Reclassified as a fleet tug, old, on 15 May 1944, her hull number became ATO-19. Allegheny continued serving in the Eastern Sea Frontier through the cessation of hositilities with Germany in early May 1945. Retained at Cape May for service as a salvage and rescue vessel, the old tug towed the surrendered German submarine U-858 into that port in June. Allegheny was decommissioned on 10 July 1946, and her name was stricken from the Navy list on 25 September 1946. She was turned over to the Maritime Commission on 18 February 1947 and eventually scrapped.