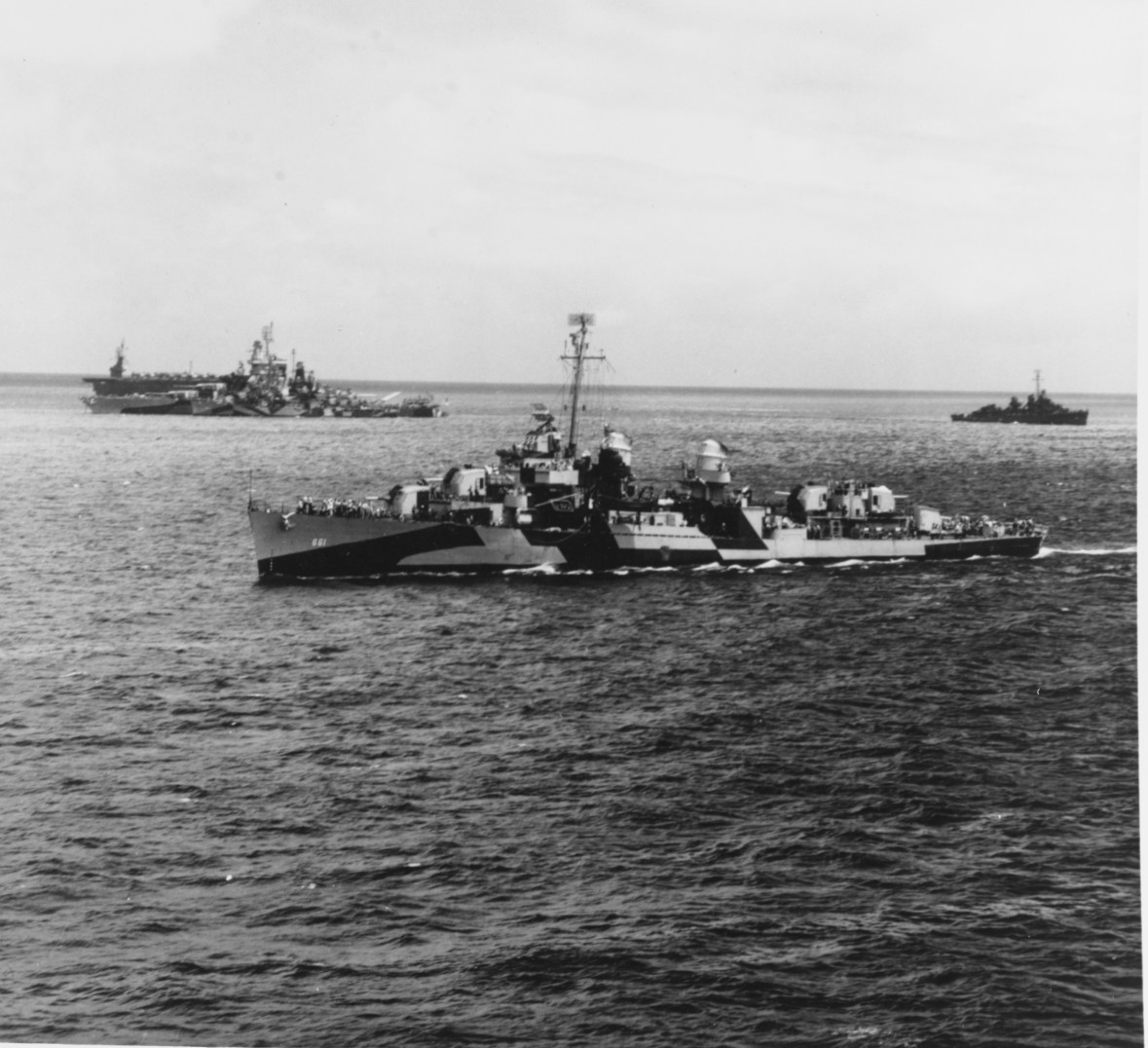 Kidd (DD-661) underway off Roi Island, Kwajalein, enroute to the Saipan invasion, 12 June 1944. Anchored in left background is Tennessee (BB-43), with a destroyer alongside and an escort carrier beyond. Photographed from New Mexico (BB-40). National Archives photograph, 80-G-253680.

Isaac Campbell Kidd, born in Cleveland, Ohio, 26 March 1884, entered the Naval Academy in 1902. He served in Columbia, New Jersey, North Dakota, Pittsburgh, San Diego, New Mexico, Utah, and Vega. During the Japanese attack on Pearl Harbor, 7 December 1941, Rear Admiral Kidd was Commander of Battleship Division 1 and Chief of Staff and Aide, Commander, Battleship Battle Force. At the first knowledge of the attack, he rushed to the bridge of Arizona (BB-39), his flagship, and "courageously discharged his duties as Senior Officer Present Afloat until Arizona blew up from a magazine explosion and a direct bomb hit on the bridge which resulted in the loss of his life."

He was awarded the Medal of Honor and the Purple Heart for his "conspicuous devotion to duty, extraordinary courage, and complete disregard of his own life..." 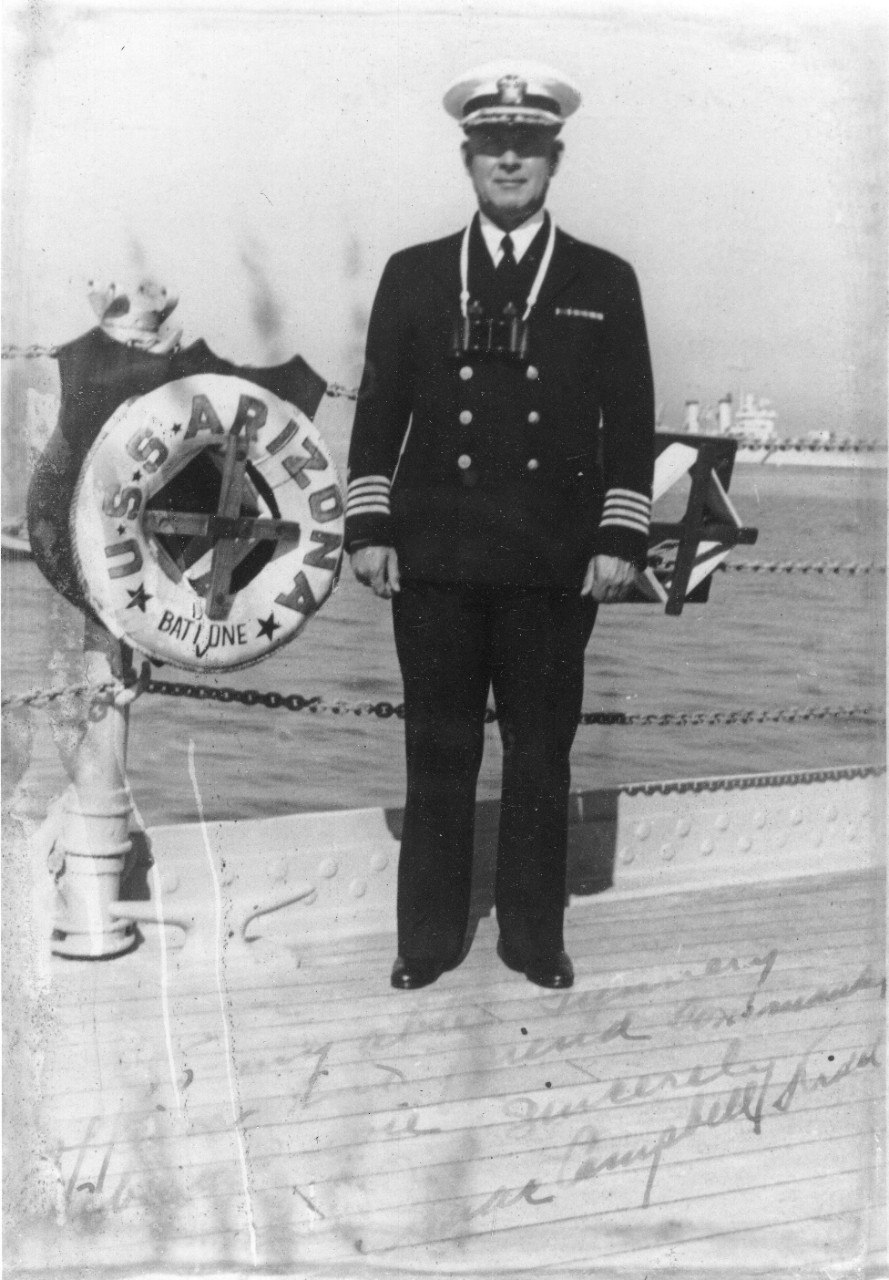 Photographed on the deck of his ship, circa 1939. Captain Isaac Campbell Kidd has inscribed the original print: To my able gunnery officer and friend Commander Abercrombie. Sincerely, Isaac Campbell Kidd. Lieutenant Commander Laurence A. Abercrombie was assigned to Arizona during the latter part of Kidd's tour as her commanding officer. Donation of Richard C. Beggarly, Jr., June 2000. U.S. Naval History and Heritage Command photograph, NH 97385.

After shakedown out of Casco, Maine, in June, Kidd cruised in the Atlantic and Caribbean escorting large combatant vessels until she departed for the Pacific in August 1943 in company with Alabama (BB-60) and South Dakota (BB-57). Arriving Pearl Harbor 17 September 1943, she got underway 29 September escorting aircraft carriers toward Wake Island for the heavy air attacks 5 October and returned to Pearl Harbor 11 October 1943.

Mid-October found Kidd underway with a formidable task force to strike Rabaul and to support the Bougainville landings. Upon reaching a strike position south of Rabaul on the morning of 11 November, the task force struck hard at Japanese positions on the island. Kidd dropped astern of her formation to rescue the crew of a plane from aircraft carrier Essex (CV-9) which had splashed as the American carrier launched a strike at Rabaul. A group of planes from an extremely heavy Japanese counterattacking force dove at the destroyer in an attempt to sink her while she was on her own. Striking back hard, she splashed three Japanese planes and successfully completed the rescue while skillfully maneuvering to dodge torpedoes and bombs. Comdr. Roby, her commanding officer, received the Silver Star for gallantry during this action. The destroyer returned to Espiritu Santo 13 November.

Kidd next screened carriers making air attacks on Tarawa during the Gilbert Island invasion from 19 to 23 November. On the 24th she spotted 15 low flying enemy bombers heading toward the heavy ships, gave warning, and shot down 2 "Vals." After Tarawa was secure, Kidd remained in the Gilbert Islands to support cleanup operations before returning to Pearl Harbor 9 December.

On 11 January 1944 Kidd sailed for the forward area, touched at Espiritu Santo, then sailed next day for Funafuti, arriving 19 January. During the invasion of the Marshall Islands 29 January to 8 February, Kidd screened heavy ships and bombarded Roi and Wotje, then anchored at Kwajalein 26 February.

From 20 March to 14 April Kidd guarded an airstrip under construction on Emirau and supported the occupation of Aitape and Hollandia in New Guinea 16 April to 7 May. She fought in the Marianas campaign 10 June to 8 July and helped soften up Guam for invasion 8 July to 10 August.

In need of repairs, Kidd sailed for Pearl Harbor, arriving 26 August 1944. On 15 September she departed Pearl, reached Eniwetok 25 September, and arrived Manus 3 October. There she became part of the giant Philippines invasion fleet and entered Leyte Gulf 20 October. Here she screened the initial landings and provided fire support for soldiers who fought to reconquer the island until she sailed 14 November for Humboldt Bay, New Guinea, arriving 19 November. On 9 December Kidd headed toward Mare Island Navy Yard for overhaul and moored at Mare Island Christmas Day.

While on picket station 11 April 1945, Kidd and her division mates, Black (DD-666), Bullard (DD-660) and Chauncey (DD-667), with the help of Combat Air Patrol, repelled three air raids. That afternoon a single enemy plane crashed Kidd, killing 38 men and wounding 55. As the destroyer headed south to rejoin the task group, her effective fire drove off enemy planes trying to finish her. Stopping at Ulithi for temporary patchwork, she got underway 2 May for the West Coast, arriving Hunter's Point Naval Shipyard 25 May. 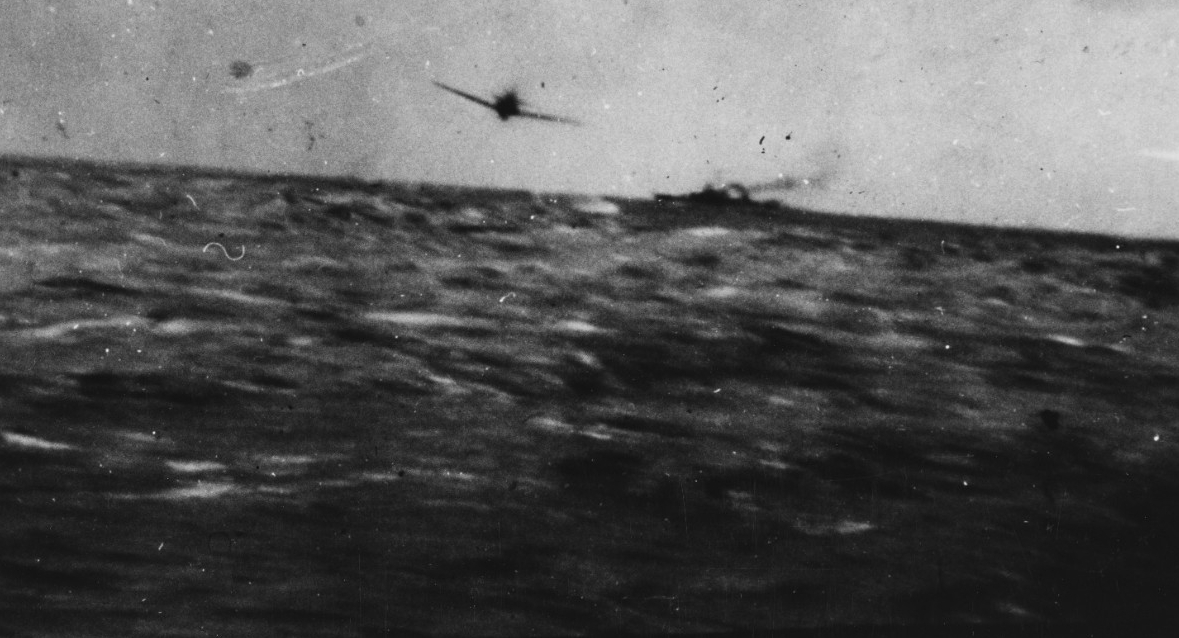 Japanese kamikaze plane about to crash into Kidd (DD-661), off Okinawa, 11 April 1945. The plane hit the ship's side killing 38 of her crew. Photographed from the Kidd. Note escorting destroyer in the background. Courtesy of Mr. Lewis B. Jenkins, Jr., Beltsville, Maryland, 1972. Naval History and Heritage Command photograph, NH 75767.

On 1 August 1945, Kidd sailed to Pearl Harbor and returned to San Diego 24 September 1945 for inactivation. She decommissioned 10 December 1946 and entered the Pacific Reserve Fleet.

When the United States had allowed her military strength to shrink beyond the danger point, the Communist struck in Korea. Fortunately, there were ships in reserve, though it took time to obtain and train crews and provide material. Kidd recommissioned 28 March 1951, Lt. Comdr. Robert E. Jeffery in command; sailed to the Western Pacific 18 June; and arrived Yokopuka 15 July. She joined Task Force 77 and patrolled off the Korean coast until 21 September when she sailed for the East Coast of Korea. From 21 October to 22 January 1952, Kidd bombarded targets of opportunity from Wan-Do Island to below Koesong. She then sailed with Destroyer Division 152 to San Diego, arriving 6 February 1952.

Kidd again got underway for Korea 8 September 1952; joined the screen of a hunter-killer group near Kojo; and, in November, was back on bombardment missions off North Korea. Shortly thereafter, truce talks began. Kidd continued to patrol the Korean coast during negotiations, strengthening the position of American representatives by showing the Communists that we were ready and able to intensify operations. She departed Far East 3 March 1953 via Midway and Pearl Harbor and arrived San Diego for overhaul 20 March. 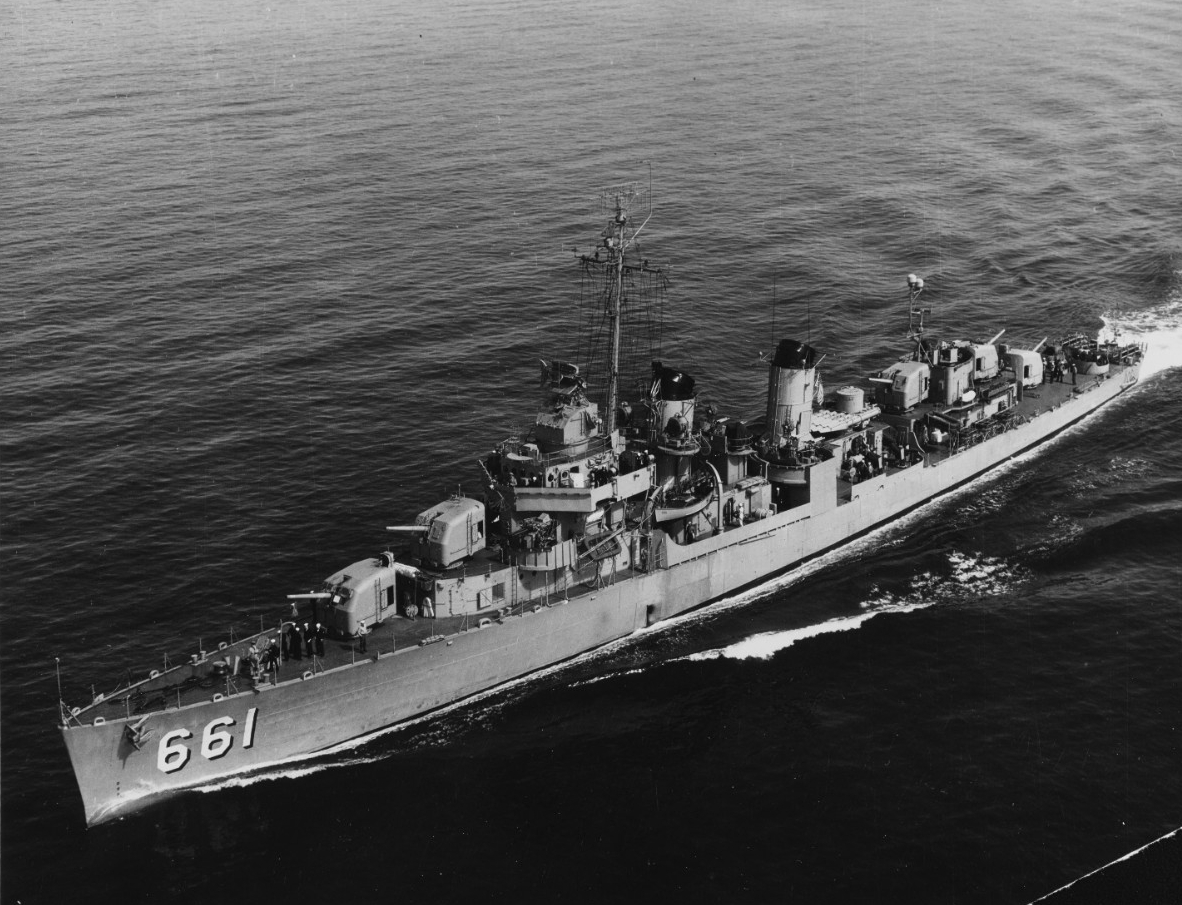 Kidd (DD-661) underway at the time she was recommissioned for Korean War service, circa March 1951. This image was received by the Naval Photographic Center in December 1959, but was taken much earlier. Note the ship still carries World War II vintage radar antennas and is otherwise fitted as she was in mid-1945. Official U.S. Navy photograph from the collections of the Naval History and Heritage Command, NH 107198.

From late 1953 to late 1959 Kidd alternated Westpac cruises with operations on the West Coast making stops at Pearl Harbor and various ports in Japan, Okinawa, Hong Kong, and the Philippines.

She visited Sydney, Australia, 29 March 1958 and later that year patrolled the Formosa Straits.

Kidd got underway 5 January 1960 for the East Coast via the Panama Canal, arriving Philadelphia 25 January. From there she made Naval Reserve training cruises to various East Coast ports. She joined fleet operating forces during the Berlin Crisis in 1961. December 1961 found Kidd patrolling off the Dominican Republic in a "show-of-force" patrol to provide an element of security in the troubled Caribbean.

Kidd arrived Norfolk 5 February 1962 and joined Task Force Alpha for ASW exercises. On 24 April she was assigned to the Naval Destroyer School at Newport. After a cruise to the Caribbean, on 1 July 1962 she resumed Naval Reserve training. Kidd decommissioned 19 June 1964, entered the Atlantic Reserve Fleet, and at present is berthed at Philadelphia.