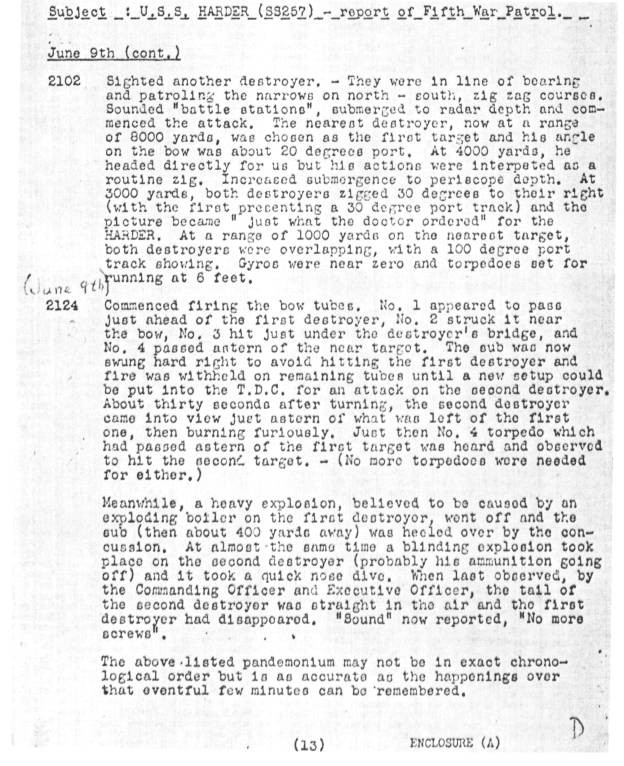 A fish of the mullet family found off South Africa.

Following shakedown off the East Coast, Harder sailed for Pearl Harbor; and, after a short stay there, she departed on her first war patrol 7 June 1943. Cruising off the coast of Japan, the submarine worked her way inside a picket line and sighted her first target 22 June. She made a radar approach on the surface and fired four torpedoes at the two-ship convoy, sinking Sagara Maru. She returned to Midway 7 July.

Harder began her second war patrol 24 August from Pearl Harbor; and, after touching at Midway, she headed for the Japanese coast. While patrolling off Honshu 9 September, she attacked and sank Koyo Maru, and later that night ran by an escort ship at a range of 1,200 yards without being detected. Two days later the submarine encountered a convoy. After running ahead to improve her firing position, she sank cargo ship Yoko Maru with a spread of three torpedoes. Continuing her patrol, Harder sighted two more ships 13 September, but she was forced down by enemy planes while firing torpedoes. Escorts kept the submarine down with a severe depth carge attack which lasted for over 2 days and almost exhausted her batteries. After evading the Japanese ships, Harder detected her next target 19 September; a torpedo sent Kachisan Maru to the bottom almost immediately. Though running, in bad weather, Harder continued to find good targets. On 23 September she sank a 4,500-ton freighter, Kowa Maru, and a 5,800-ton tanker, Daishin Maru, off Nagoya Bay. Her torpedoes expended, Harder turned eastward 28 September. After shooting up two armed trawlers the 29th, she touched Midway 4 October and arrived Pearl Harbor 4 days later.

For her third war patrol Harder teamed with Snook and Pargo to form a deadly and coordinated attack group. Departing 30 October for the Marianas, Harder encountered a target 12 November. Promptly dispatching this one, she surfaced and sighted a trawler-escort damaged by the explosion of one of her own depth charges. Submerging again until sunset, the submarine sank the damaged ship with gunfire, then turned her bow toward Saipan in search of new targets. Sighting three marus on the 19th, she radioed her companions and closed for attack. After passing close by an escorting destroyer, Harder fired six torpedoes at two ships, sinking Udo Maru. As depth charges began to fall, she pressed the attack; two more torpedoes finished Hokko Maru. She surfaced to periscope depth after nightfall to finish off the third maru. Shortly before midnight, she fired several more shots at 6,000-ton Nikko Maru; but she stubbornly refused to sink. A brave, but doomed, enemy crew kept the cargo ship afloat until Harder had expended all torpedoes, many of which ran erratically. Rough weather the next day finally sank the damaged maru. Harder returned to Pearl Harbor 30 November, then sailed to Mare Island, Calif., for overhaul.

Returning to action in the Pacific, Harder reached Pearl Harbor 27 February 1944 and departed on her fourth war patrol 16 March with Seahorse. She headed for the western Carolinas where she was assigned duty as lifeguard ship for downed aviators. During American air strikes against Woleai 1 April Harder received word of an injured pilot awaiting rescue from the beach of a small enemy-held island west of Woleai. Protected by air cover, she nosed against a reef, maintained her position with both screws, and sent a boat ashore through breaking surf. Despite Japanese snipers, boiling shoals, and the precarious position of the submarine, the daring rescue succeeded, and the intrepid submarine returned to the open sea.

On 13 April an enemy plane sighted Harder north of the western Carolines and reported her position to Ika-zuchi, a patrolling destroyer. As the enemy ship closed to within 900 yards, Harder fired a spread of torpedoes that sank the attacker within 5 minutes. Dealey's famous report was terse-"Expended four torpedoes and one Jap destroyer." Four days later Harder spotted a merchant ship escorted by destroyers. Firing four torpedoes, she sank 7,000-ton Matsue Maru and damaged one of the escorts. Then, adding to the enemy's misery, she returned to Woleai where she surfaced on the morning of 20 April to deliver a shore bombardment under cover of a rain squall. She returned to Fremantle from this highly varied and successful patrol 3 May.

Even greater successes lay ahead for this valiant submarine. Having sunk one destroyer, Harder joined the all-out hunt against Japanese destroyers, once considered the most dangerous of foes. Assigned the area around the Japanese fleet anchorage at Tawi-Tawi, Harder departed Fremantle 26 May with Redfin and headed for the Celebes Sea.

On 6 June Harder entered the heavily patrolled Sibutu Passage between Tawi-Tawi and North Borneo and encountered a convoy of three tankers and two destroyers. She gave chase on the surface but was illuminated by the moon. As one of the destroyers turned to attack, Harder submerged, turned her stern to the charging destroyer, and fired three torpedoes at range of 1,100 yards. Two struck Minatsuki and exploded; the destroyer sank within 5 minutes. After attacking the second escort without success, Harder was held down by a depth charge attack while the convoy escaped.

Early next morning an enemy plane spotted Harder. The submarine soon sighted another destroyer searching the area for her. As before, the enemy closed the range; once again, Harder took the initiative. She fired three torpedoes at short range, and two of them struck amidships, one detonating the ship's magazine with a tremendous explosion. Hayanami sank a minute later. Following the inevitable depth charge attack, Harder transited the Sibutu Passage after dark and steamed to the northeast coast of Borneo. There on the night of 8 June she picked up six British coast-watchers, and early next day she headed once more for Sibutu Passage.

That evening Harder sighted two enemy destroyers patrolling the narrowest part of the passage, just 6 miles from Tawi-Tawi. After submerging, she made an undetected approach and at 1,000 yards fired four torpedoes at the overlapping targets. The second and third torpedoes blasted destroyer Tanikaze; she sank almost immediately, her boilers erupting with a terrific explosion. The fourth shot hit the second ship and exploded with a blinding flash. Within minutes Harder surfaced to survey the results, but both ships had disappeared. Soon afterward, she underwent the inevitable depth charge attack toy enemy planes; then she set course for a point south of Tawi-Tawi to reconnoiter.

On the afternoon of 10 June Harder sighted a large Japanese task force, including three battleships and four cruisers with screening destroyers. An overhead plane spotted the submarine at periscope depth and a screening escort promptly steamed at 35 knots toward her position. Once again, Harder became the aggressive adversary. As the range closed to 1,500 yards, she fired three torpedoes on a "down the throat" shot, then went deep to escape the onrushing destroyer and certain depth charge attack. Within a minute two torpedoes blasted the ship with violent force just as Harder passed under her some 80 feet below. The deafening explosions shook the submarine far worse than the depth charges and aerial bombs which the infuriated enemy dropped during the next 2 hours. When she surfaced, Harder saw only a lighted buoy marking the spot where the unidentified destroyer either sank or was heavily damaged.

Harder reconnoitered Tawi-Tawi anchorage 11 June and sighted additional enemy cruisers and destroyers. At 1600 she headed for the open sea and that night transmitted her observations which were of vital importance to Admiral Spruance's fleet prior to the decisive Battle of the Philippine Sea. Harder steamed to Darwin 21 June for additional torpedoes; and, after patrolling the Flores Sea south of the Celebes, she ended the patrol at Darwin 3 July.

The important results of Harder's fifth war patrol have caused some to call it the most brilliant of the war. Not only did Harder further deplete the critical supply of destroyers by sinking three of them and heavily damaging or destroying two others in 4 days, but her frequent attacks and a rash of enemy contact reports on this fleeting marauder so frightened Admiral Toyoda that he believed Tawi-Tawi surrounded by submarines. As a result, Admiral Ozawa's Mobile Fleet departed Tawi-Tawi a day ahead of schedule. The premature departure upset the Japanese battle plans, and forced Ozawa to delay his carrier force in the Philippine Sea, thus contributing to the stunning defeat suffered by the Japanese in the ensuing battle.

Harder, accompanied by Hake and Haddo, departed Premantle 5 August for her sixth and last war patrol. Assigned to the South China Sea off Luzon, the wolfpack headed northward. On 21 August Harder and Haddo joined Ray, Guitarra, and Raton in a coordinated attack against a convoy off Paluan Bay, Mindoro. The Japanese lost four passenger-cargo marus, possibly one by Harder.

Early the next day, Harder and Haado attacked and destroyed three coastal defense vessels off Bataan, Harder sinking frigates Matsuwa and Hiburi; then, joined by Hake that night, they headed for Caiman Point, Luzon. At dawn 23 August Haddo attacked and fatally damaged Asakaze off Cape Bolinao. Enemy trawlers towed the stricken destroyer to Dasol Bay; and Haddo, her torpedoes expended, informed Harder and Hake the following night of the attack and left the wolf-pack for replenishment at Biak.

Harder and Hake remained off Dasol Bay, searching for new targets. Before dawn 24 August they sighted a Japanese minesweeper and a three-stack Siamese destroyer. As Hake closed to attack, the destroyer turned away toward Dasol Bay. Hake broke off her approach, turned northward, and sighted Harder's periscope about 600 to 700 yards dead ahead. Swinging southward, Hake then sighted the minesweeper about 2,000 yards off her port quarter swinging toward them. To escape the charging minesweeper, Hake started deep and rigged for silent running. At 0728 she heard 15 rapid depth charges explode in the distance astern. She continued evasive action that morning, then returned to the general area of the attack shortly after noon. She swept the area at periscope depth but found only a ring of marker buoys covering a radius of one-half mile.

The vigorous depth charge attack thus ended the career of Harder, and she went down with all hands. The Japanese report of the attack concluded that "much oil, wood chips, and cork floated in the vicinity." Dubbed "Hit 'Em again, Harder," this intrepid submarine had created havoc among Japanese shipping. Her record of aggressive daring exploits became amost legendary. All six of her patrols were designated successful. She received the Presidential Unit Citation, and in accordance with Navy custom it was presented to the second Harder upon commissioning. The resolute and resourceful Comdr. Dealey, "a submariner's submariner," was posthumously awarded the Medal of Honor.