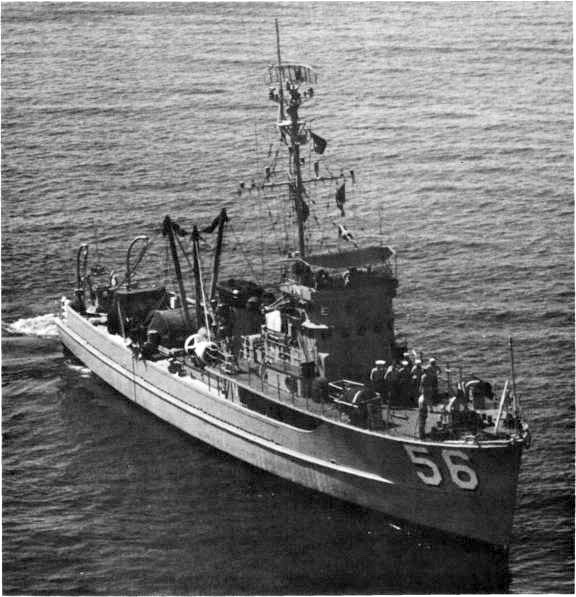 Caption: The coastal minesweeper Turkey (MSCO-56), October 1966. Except for removal of most of her guns and addition of newer radar, she is little changed from her original configuration.

A large game and poultry bird, allied to the pheasant and native to North America. Benjamin Franklin suggested that the abundant wild turkey, which had provided food for the early settlers in the New World, should be chosen as the national bird.

YMS-444 completed fitting out at New York and, in January 1945, made a shakedown voyage to Little Creek. On 6 February, she arrived at Norfolk and remained there while members of her crew attended Fire Fighting School. Then, late in February, she returned to New York. In March, the auxiliary motor minesweeper began operating out of Tompkinsville, N.Y.

On 20 July, she departed New York and, after a stop at Miami, steamed through the Panama Canal to the California coast, arriving at Los Angeles on 8 September. On the 17th, she set her course westward for Pearl Harbor and the Marshalls. Although the war was over when YMS-444 arrived in the Pacific, there were still enormous tasks left for the minesweepers. YMS-444 pursued her duties operating out of Saipan and Eniwetok in October 1945. In November, she moved on to the Ryukyus and Japan, sweeping mines in the Kyushu-Korea and Honshu areas, and remained in Japanese waters into the new year.

On 24 February 1946, she departed Kure and set her course, via the Marianas and Marshalls, for Pearl Harbor and California. After pausing at San Pedro in April, she got underway for the Canal Zone on the 27th. It was 6 June before she departed the Canal Zone and set her course, via Charleston, for New York. She was decommissioned on 30 August 1946 and remained in the 3d Naval District as a Naval Reserve training ship.

For the next six years, YMS-444 operated out of New York ports and on the Great Lakes. On 1 September 1947, she was named Turkey and redesignated a motor minesweeper (AMS-56). She was placed in commission, in reserve, in April 1950, and she returned to active status on 21 November.

Turkey returned to the Atlantic in March 1952 and was assigned to serve with the Mine Forces, Atlantic Fleet, in August. During the following four years, she operated out of east coast ports with occasional voyages to the Caribbean. On 7 February 1955, she was reclassified an old coastal minesweeper MSC(O)-56. She arrived at Charleston on 9 November 1956 and was decommissioned there on 23 November 1956. Then, on 1 May 1957, she departed Charleston, steamed via New York, Halifax, and Montreal, and reported to the Commander, 4th Naval District, Toledo, Ohio, on 27 May 1957.

In 1960, Turkey was transferred to the 1st Naval District to continue as a Reserve training ship. As such, she operated out of Fall River, Mass., until September 1968 when she was replaced as a training ship by Jacana (MSC-193). Her name was struck from the Navy list as of October 1968, and she was sold in August 1969.