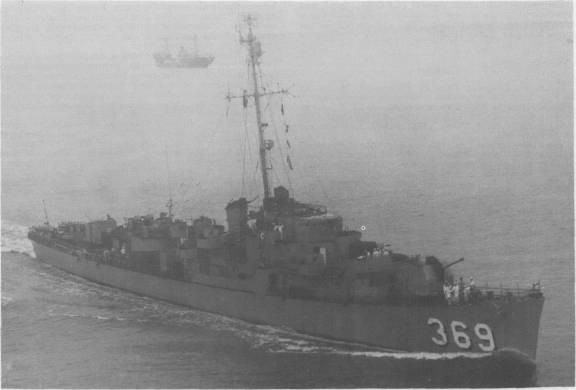 Thaddeus Parker, born on 13 November 1923 in Cross City, Fla., enlisted in the United States Navy on 27 June 1941. Upon completion of basic training, Parker was assigned to the U.S. Naval Hospital, Norfolk, Va., as a Hospital Apprentice on 30 August. On 31 October 1941, he was stationed at the Marine Corps Base, Quantico, Va., where he served as a hospital corpsman in the U.S. Naval Hospital, and, after 29 March 1942, in the First Raider Battalion, Fleet Marine Force.

Parker accompanied the Raider Battalion when that unit was ordered to the South Pacific. He was awarded the Navy Cross "for extraordinary heroism while serving as company corpsman during an engagement with enemy Japanese forces on Guadalcanal, Solomon Islands, on the night of September 13-14 1942." The citation further stated: "When his company was almost completely surrounded by the Japanese and under attack from all directions, Parker, with utter disregard for his own personal safety, constantly exposed himself to enemy fire to care for and evacuate the wounded. As a result of his dauntless courage and outstanding devotion to duty, he undoubtedly saved the lives of many of the injured who otherwise might have perished."

Killed in action at New Georgia, Solomon Islands, on July 20, 1943, Parker was posthumously awarded the Purple Heart Medal and the Silver Star Medal with the following citation: "For gallantry in action at New Georgia, Solomon Islands. Disregarding his personal safety, he aggressively moved forward into areas swept by intense, hostile fire to render medical aid to two seriously wounded Marines. In courageously attempting to evacuate the second man, Pharmacist's Mate Parker was killed."

Following shakedown training off Bermuda from 17 November to 16 December and yard work in Boston, the new destroyer escort got underway on 29 December 1944 for the west coast. She transited the Panama Canal on 7 January 1945 and arrived at San Diego on the 16th.

Four days later, Thaddeus Parker headed for Hawaii as the escort for a troopship and reached Pearl Harbor on 26 January. On 5 February, the destroyer escort proceeded to Eniwetok. For the next two months, she escorted ships to Guam and Saipan. On 2 March, Thaddeus Parker departed Eniwetok with three other escorts and 12 troop transports that were loaded with Marine replacements for battle casualties on Iwo Jima. She lay off that island for several days before being assigned to screening duties. The escort returned to Eniwetok on the 25th and, the following month, was ordered to Ulithi. On 12 May, she rendezvoused with a troop transport, south of the equator, and escorted it to the Palaus.

Thaddeus Parker was assigned to an antisubmarine screen in the vicinity of Peleliu and served as an air-sea rescue ship in Kossol Roads in the Palaus. She rescued a Marine pilot on 19 May and saved another

on 18 July. On 27 June, she shelled enemy installations at the Koror Naval Base. The escort returned to Ulithi on 20 July and was assigned escort duty. She then made two voyages to Okinawa: the first, escorting a merchant convoy; the second, with the other ships of Escort Division 86.

Thaddeus Parker was at Okinawa when hostilities with Japan ceased; and she waited for almost a month before receiving orders on 11 September to proceed to Honshu, Japan. She was a unit of the southern Japan Occupation Forces from 14 September 1945 to 2 January 1946 when she began her return voyage to the United States. She was assigned to the 19th Fleet at San Diego and was placed out of commission, in reserve, on 31 May 1946.

In March 1951, during the Korean War, Thaddeus Parker was removed from the Reserve Fleet and prepared for activation. She was recommissioned at San Diego on 21 September 1951 with Lt. Comdr. John L. Hansen in command. After shakedown training and post-shakedown repairs at the Mare Island Naval Shipyard, the ship returned to San Diego where she operated as a plane guard and participated in antisubmarine operations.

On 14 February, she and other reactivated ships sailed for the east coast to join the Atlantic Fleet. Newport, R.I., was her new homeport. In the spring, she made a cruise to Bermuda and, later, escorted Block Island (CVE-106) to the Caribbean for training. She then returned to Newport and remained in the Narragansett Bay area until November when she steamed to Guantanamo Bay for refresher training which she interrupted to return home to Newport for Christmas leave. She returned to Guantanamo in January 1953 to complete the training. In April and May, she provided services to the Training Command at Key West.

In June, the escort made a midshipman cruise to South America, visiting ports in Brazil, Colombia, and the British West Indies. After operations out of Newport, Thaddeus Parker made another midshipman cruise the following year. This one took her to Europe from 11 July to 3 September 1954 and included visits to ports in Scotland and France. The ship then operated along the Atlantic seaboard, from Brazil to Nova Scotia until 11 November 1957 when she was assigned duty as a Naval Reserve Training Ship at New York.

Almost a decade later, Thaddeus Parker was decommissioned and struck from the Navy list on 1 September 1967. She was sold on 9 July 1968 to Peck Iron and Metals Co., Portsmouth, Va., and scrapped.