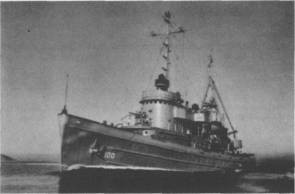 An Indian tribe of North Carolina.

Clearing Norfolk 4 April 1944 Chowanoc (reclassified ATF-100 15 May) arrived at Pearl Harbor 17 May for tug duty until 12 June. She arrived at Kwajalein 25 June to operate in the Marshall Islands on towing and salvage duty until 3 August when she began her participation in the Marianas operation, with towing duty from Eniwetok to Guam and Saipan.

Chowanoc steamed from Manus 14 October 1944 to operate as a salvage tug during the invasion of Leyte from 20 to 24 October. Continuing her essential service during the epic Battle for Leyte Gulf, she came under heavy air attack and aided in downing several aircraft. She served in Leyte Gulf until 22 November, then prepared for the invasion of Lingayen Gulf on 9 and 10 January 1945. Chowanoc towed Kitkun Bay (CVE-71) after she was damaged 8 January until the escort carrier could regain power the next day. Chowanoc served as salvage tug at Lingayen Gulf until 26 February when she steamed to Ulithi for overhaul. Returning to San Pedro Bay 24 May, she served there until early July, when she joined the service group supporting the mighty 3d Fleet in its final operations against Japan.

Chowanoc served the Fleet at Guam, Okinawa, and in the Marshall Islands until she returned to Pearl Harbor 27 February 1946. Here she joined JTF 1 for the atomic weapons tests called Operation "Crossroads," during which she operated between Bikini and Kwajalein. From 1947 into 1950, Chowanoc gave service in the Hawaiian Islands, at San Francisco and San Diego, and for extended periods at Samoa, Guam, Saipan, Eniwetok, and Kwajalein. Between December 1950 and April 1952, she offered tug and salvage services in Alaskan waters, then returned to local operations at San Diego.

The tug sailed from Long Beach 28 March 1953 to operate as harbor tug at Yokosuka, Japan, where the harbor was thronged with the ships waging the Korean war. She returned to San Diego 29 October. A second Far Eastern tour in 1954 and 1955 was followed by operations along the west coast, in Alaskan waters, and short towing voyages to Pearl Harbor until March 1959 when she sailed for 5 months duty in Japan. In May 1960, Chowanoc sailed once more for tour of duty in Alaskan waters. Upon her return to San Diego, 29 August, the tug resumed operations along the west coast for the remainder of 1960.

Chowanoc received four battle stars for World War II service; and one for the Korean war.