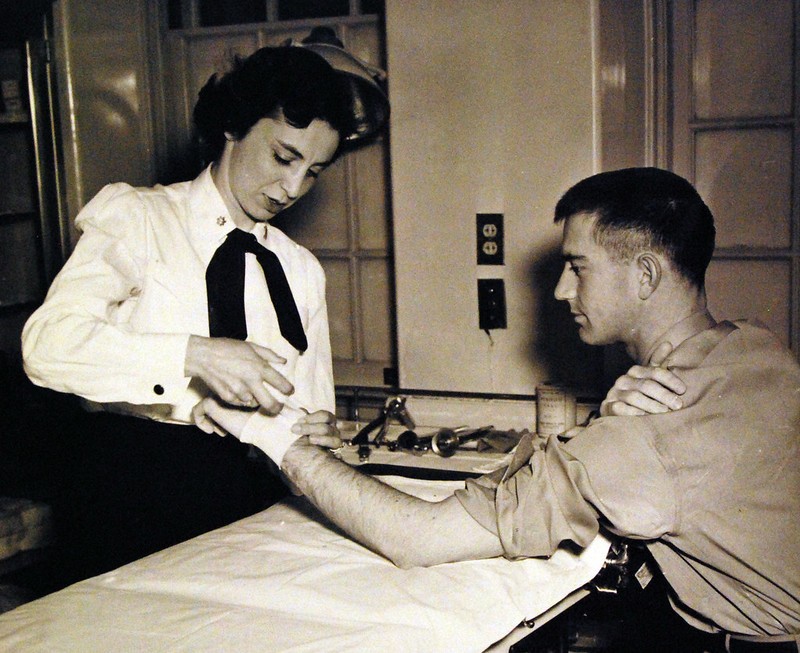 “The Army and the Navy needs doctors, and a doctor is a doctor, whether man or woman.” (North American Newspaper Alliance (NANA), 28 November 1952)

Bernice Gertrude Rosenthal was born on 1 September 1912 in New York City. After attending Long Island University, she earned her doctorate of medicine from Woman’s College of Pennsylvania in Philadelphia in 1936. After graduation, she moved to La Crosse, Wisconsin, to complete her internship and her residency at St. Francis Hospital. She spent another 18 months working on her specialty in anesthesia at the University of Illinois Hospital in Chicago. After drawing a 50-mile circle around Philadelphia, she chose Somerville, New Jersey, to establish her general practice with the hope of getting extra training in surgery at her alma mater.

Never one to sit still, Dr. Walters became a licensed pilot while waiting for patients for her new practice. After the outbreak of World War II, she briefly served as a medical officer with the Civil Air Patrol (CAP). In late 1942, she applied to join the Women’s Auxiliary Service Pilots (WASP). Dr. Walters later said that she flew with the WASPs for three months before the President of the United States agreed to allow women doctors to join the Medical Corps. She immediately decided to make a switch. In July 1943, she accepted her commission as a medical officer in the Naval Reserve. [1]

The newly commissioned Lieutenant (j.g.) Walters was sent to Bethesda, Maryland, where she spent three months in training on tropical medicine. Her first assignment was the dispensary at the Boston Navy Yard. She later served at the Naval Air Station at Cape Cod and at Bainbridge, Maryland. She wanted more training in anesthesia, but the Navy was not offering training to reserve officers. In 1946, she decided to go inactive for two years to train at the veterans’ hospital in Dallas, Texas and Alexandria, Louisiana. It was during this time when she met and married her husband, Lieutenant Herbert “Walt” Walters, a naval aviator.

When Walters returned to active duty in 1948, she reported to the naval hospital in Pensacola, Florida. In the spring of 1950, her husband reported to Norfolk, Virginia. He was assigned to an aircraft carrier, Wright (CVL-49).  In hopes of following her husband, Walters applied to be selected for shipboard duty.[2] After completing her required twenty-four months’ active duty at Pensacola, she received orders to serve aboard ship. Before this decision, only nurses had been allowed to serve at sea. After she received her orders, a columnist in a Florida newspaper targeted her marital status as being an issue.[3] Nor was the fact that she outranked her husband overlooked by reporters.

Lieutenant Commander Walters refused to accept the resistance to women doctors serving on ships. In a 1952 interview, she said “There were twenty-nine nurses on board…What’s the difference between twenty-nine nurses and one woman doctor? A woman is a woman.”[4] In spite of her reluctance to step into the spotlight, Dr. Walters was the envy of other Navy doctors who wanted to serve overseas.Lieutenant (j.g.) Patricia Pear, who was working at St. Alban’s Naval Hospital, said, “The place I’d like to go most right now is Korea, because that’s where the action is. But I’d take any overseas assignment.”[5]  Walters was one of five women physicians on active duty in the U.S. Navy at the time.

A month after she received orders to Consolation (AH-15), Lieutenant Commander Walters received notice that her husband, the flight deck officer aboard Wright, had been killed in a helicopter accident on the last day aboard his carrier. They had not seen each other since Christmas.[6] She had to deal with the death of her husband and new orders halfway around the world. Four months later, she left for Korea.

In spite of her press coverage for her appointment aboard Consolation, Lieutenant Commander Walters seemed dispassionate to her position as a role model to other women. In an interview with the reporter from Collier’s Weekly in November 1950, she rejected her significance as a subject. She said, “Why should I be written up just because I’m a woman? I want to be accepted as a doctor, and that means, without the ‘woman’ always in front of it.”[7]

Captain Robert E. Baker, of Consolation, complimented her bravery, intelligence, and even her stubbornness while aboard his ship. Although she was an accomplished surgeon, Walters was assigned to the ship as an anesthesiologist, and she was their only one. Therefore, she had not yet been sent to the frontline medical units in Korea, despite her regular requests to Captain Baker. She served for two years aboard ship in Korea. She later received the Navy and Marine Corps Commendation Medal for her service.

After her service aboard Consolation, she served for seven months in Japan before she reported to Corpus Christi, Texas.[8] In March 1953, Lieutenant Commander Walters spoke at the founders’ day banquet for her alma mater, the Woman’s Medical College of Pennsylvania, during a brief absence from her new command. In Texas, she met and married Lieutenant Commander Harry C. Nordstrom, on 31 July 1954, at the NAS Dispensary in Corpus Christi, Texas. As a physician, he had served as a medical officer since 1943. After they married, they both continued to serve in the Navy. They were both transferred to California and later Hawaii.

She gave twenty years of service after she was given her first orders aboard ship. She served in the reserves until January 1970. She retired with the rank of commander, which she received 1953. She continued to live in Hawaii serving as the chief of Anesthesiology Service at Queen’s Hospital from 1967 until she retired from civilian service in 1974. She died in Kailua, Hawaii, on 10 Feb 1975. She was survived by her husband.

In her career, Commander Bernice “Burma” Nordstrom forged a path ahead for women in the Medical Corps of the U.S. Navy.

The First Women Physicians in the U.S. Navy