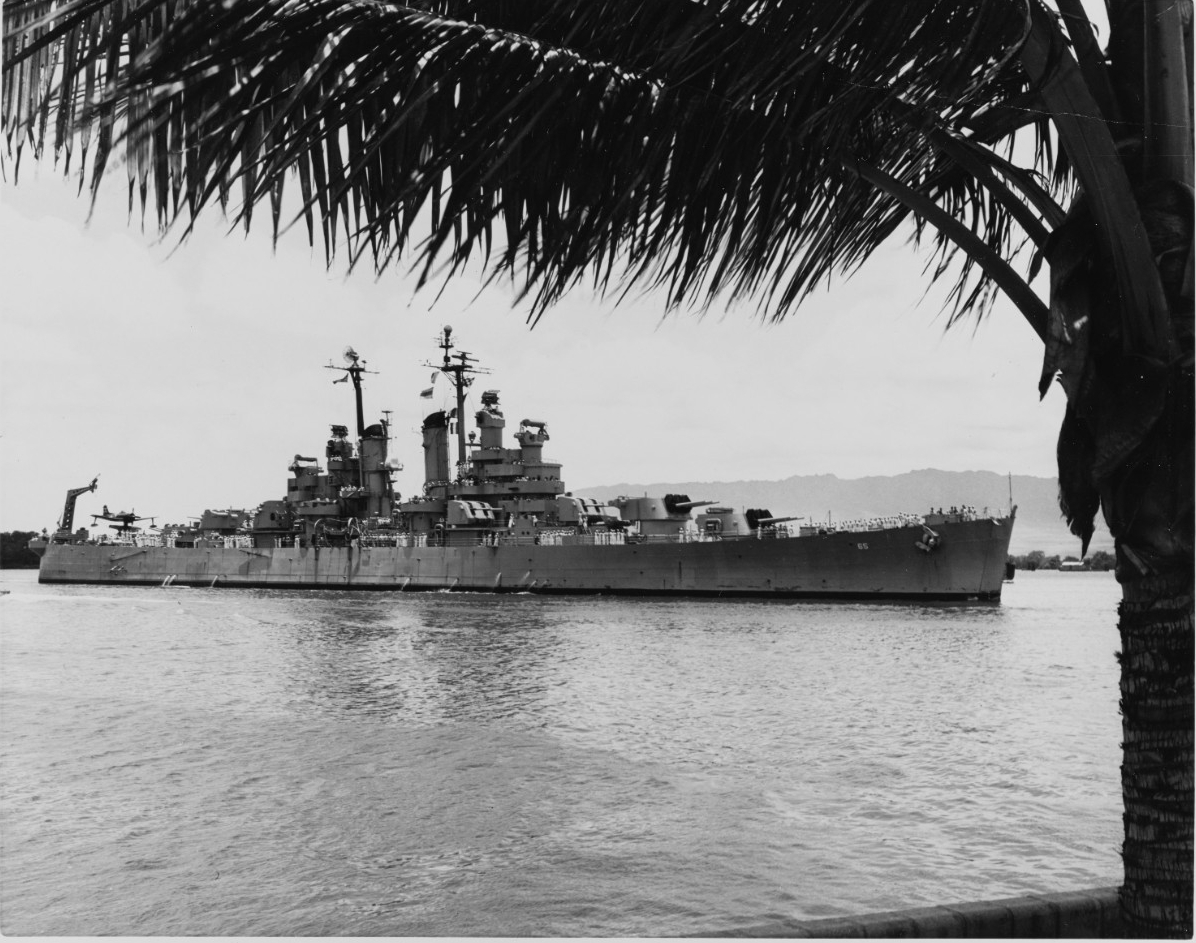 Pasadena (CL-65) entering Pearl Harbor, Hawaii, during a NROTC Midshipmen's cruise in the Summer of 1948. The photograph was released for publication on 9 August 1948. Official U.S. Navy photograph from the Collections of the Naval History and Heritage Command, NH 98201.

A city in California; the first Pasadena retained her former name. 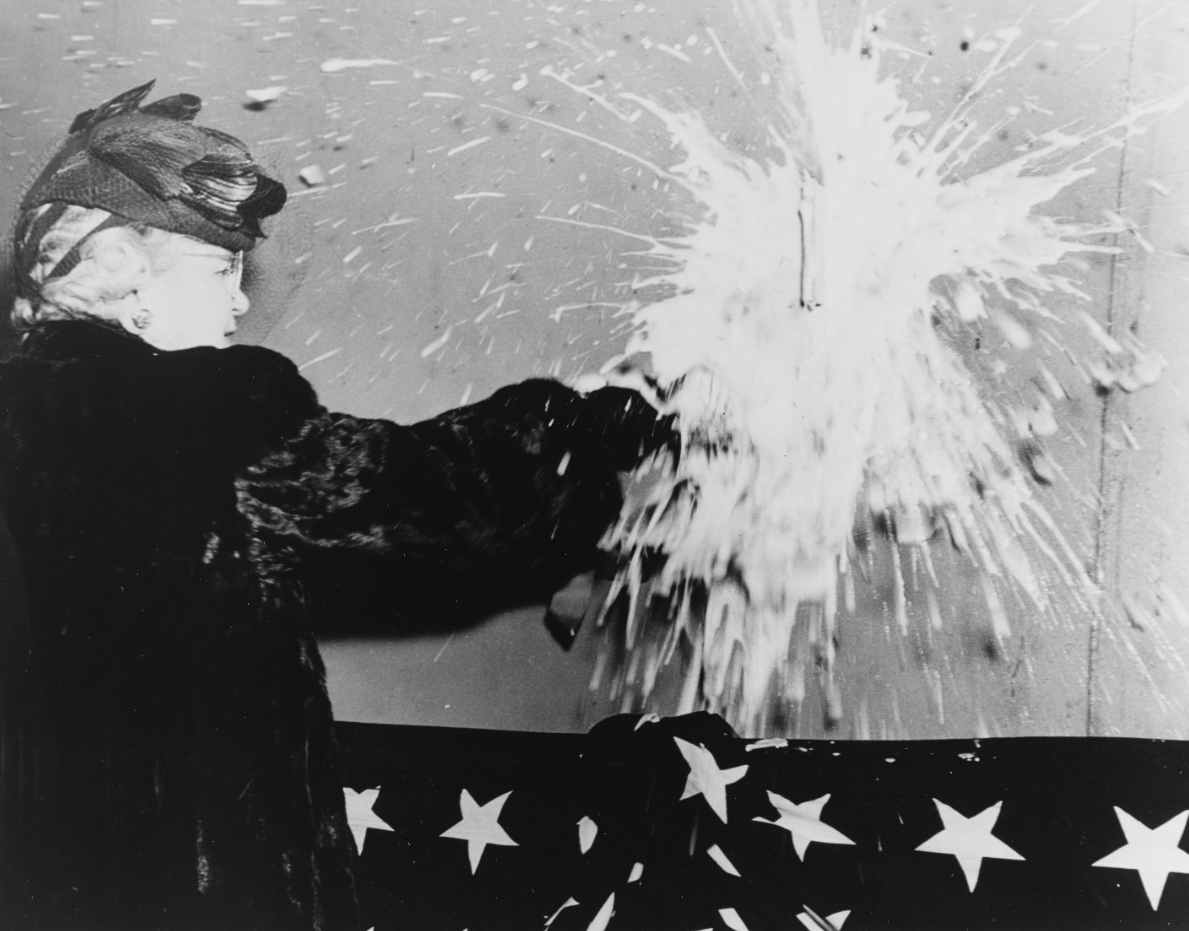 Commissioned just before the thrust into the Marianas, Pasadena completed shakedown and training during the summer of 1944 and on 25 September got underway for the Pacific theater. On 3 November she crossed the International Date Line and, continuing on, joined TF 38, the fast carrier force, at Ulithi at mid-month. Through the remainder of the year she participated in that force's operations against Luzon and Formosa in support of the Philippine campaign. In midJanuary 1945, as the assault on Luzon pressed forward, the force sailed into the South China Sea and hit Japanese installations and shipping along the Indo-China coast and on Formosa. In February, the ships, now TF 58, moved against the Japanese home islands, then swung southeast to cover the landings on Iwo Jima, during which Pasadena added her guns to the bombardment group and performed patrol duties.

Replenished at Ulithi, the force, with Pasadena in the inner screen, sortied again in mid-March to soften the way for the operation "Iceberg" assault force with strikes on the southern Japanese home islands and the northern Ryukyus in addition to those against the main assault target: Okinawa. At sea for 80 days, Pasadena, as flagship for CruDiv 17, participated in the night bombardments of Minami Daito (28 March and 10 May) and in the continuous strikes against other Japanese positions on Okinawa and Kyushu (1 April-30 May).

After a brief respite at Ulithi and Leyte in June, the force sortied from Leyte Gulf for its last strikes against the enemy's home islands in early July and from mid-month to mid-August pounded military and industrial complexes on the Tokyo plain, northern Honshu, and Hokkaido in anticipation of heavy resistance to what appeared inevitable: an invasion of Japan. On 15 August, however, Japan accepted surrender terms.

Following the cessation of Pacific hostilities, Pasadena commenced occupation duties. On 23 August she became flagship of TG 35.1, on the 27th she anchored in Sagami Wan, and on 1 September shifted to Tokyo Bay where she witnessed the official surrender ceremony the next day. From then until mid-January 1946 she remained in the Tokyo Bay area supporting the occupation forces. On 19 January she got underway for San Pedro and an overdue overhaul. Training and local operations followed and in September she headed west again. From November to February, 1947, she participated in division exercises in Micronesia, then, after fleet maneuvers in Hawaiian waters, returned to California. For the next year she conducted local operations, then, during the summer of 1948, conducted an NROTC training cruise. On 1 October she got underway again for the Far East. At the end of the month she arrived at Tsingtao and until May, 1949, operated off the China coast. On 1 June she returned to California. During the summer she conducted local exercises and on 12 September departed Long Beach for Bremerton and inactivation. Decommissioned 12 January 1950, she remains at Bremerton as a unit of the Pacific Reserve Fleet into 1970.