Manchuria and the Yellow Sea 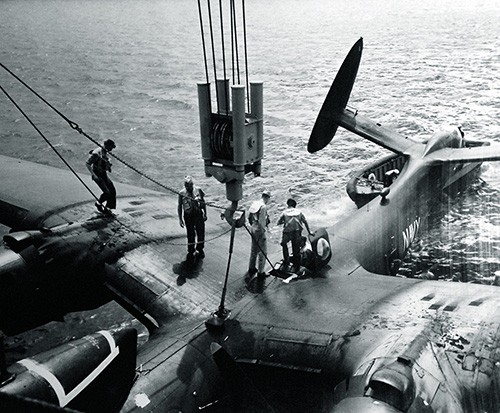 A PBM-5 aircraft, while on a routine mission, was attacked by a Soviet fighter 25 miles south of Darien (Port Arthur), Manchuria, while investigating six Soviet transport ships and a beached seaplane in the Gulf of Chihili in the Yellow Sea.  The attack resulted in no damage.  Squadron is not identified.

A PBM-5 aircraft, from VP-26, was attacked by Soviet fighters as the aircraft made an unauthorized training flight over Darien (Port Arthur), Manchuria.  The Soviets aircraft fired warning bursts for twenty minutes, which resulted in no damage.  The aircraft were based from Tsingtao, China. Caption: An aircraft model of a MiG-15 is on display in the North End of the Cold War Gallery

A PBM-5 aircraft was attacked by two People's Republic of China MiGs over the sea and was damaged.  Squadron is not identified.

A P2V aircraft was attacked by a People's Republic of China MiG-15 over the Yellow Sea.  No damage resulted to either aircraft.