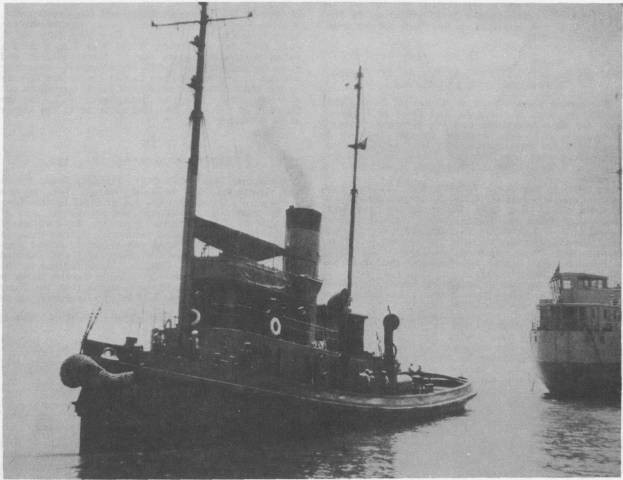 Soon after commissioning, Undaunted departed San Francisco bound for the coast of France. She operated as a tug in support of United States naval forces in Europe through the end of World War I in November 1918.

Sometime in the first half of 1919, she returned to San Francisco as a unit of the Pacific Fleet Train, the name then applied to what the Navy now calls the Service Force. While serving the Pacific Fleet, she received the designation AT-58 in July 1920 when the Navy adopted its alphanumeric system of hull designations. Later, on 27 February 1936, she became a harbor tug and was designated YT-125. At that time, her commissioned status was probably downgraded to "in service." By 1938, she was assigned to the 12th Naval District; and she remained based at San Francisco.

On 1 May 1939, Undaunted was placed back in full commission. However, that change endured only briefly; for, on 30 June, she reverted to her former "in service" status. In all likelihood, it was sometime during the two-month period she spent in full commission that Undaunted made the voyage from San Francisco to her new duty station on the east coast. By 28 May 1939, her home yard had been changed to Norfolk, Va.; and it is reasonable to assume that she arrived in the Hampton Roads area about that time. On 16 July 1940, the vessel once again became an ocean tug and resumed her former designation, AT-58. On 1 August, she was placed back in full commission at Norfolk; and records indicate that, by early October, she was assigned to the 5th Naval District on special duty but with her home port at Washington, D.C.

For the next five years, she plied the waters of the Potomac River and the Chesapeake Bay, towing ships and other craft between Norfolk, Baltimore, and Washington as well as to and from ports between the three places. On 15 May 1944, a mass redesignation of tugs occurred, and Undaunted was reclassifled an old ocean tug with the designation ATO-58. The tug was decommissioned for the last time on 1 July 1946 at the Norfolk Naval Shipyard. Her name was struck from the Navy list on 25 September 1946, and she was delivered to the Maritime Commission for disposal on 19 March 1947.