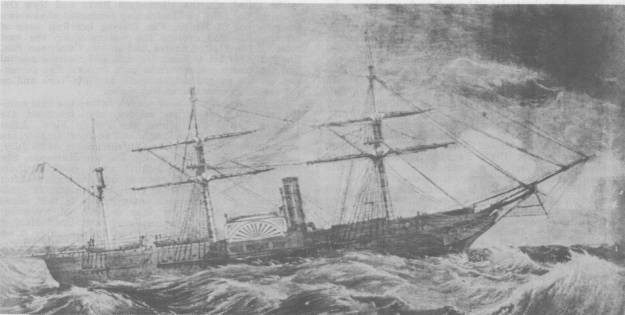 Caption: A contemporary rendering of the sidewheel frigate USS Susquehanna in heavy seas.

A river which rises in Lake Otsego in central New York and flows across Pennsylvania and the northeast corner of Maryland to empty into the Chesapeake Bay.

After completing her trials, which began in January 1851, the side-wheel steamer sailed on 8 June for the Far East to become flagship of the East India Squadron. Aulick's orders included instructions to visit Japan and negotiate a treaty opening diplomatic relations with that country. The following year, after Commodore Aulick had become ill at Canton, Susquehanna became Commodore Matthew Perry's flagship and entered Tokyo Bay with his squadron on 8 July 1853. After Perry had presented his requests to the Japanese Government, the American warships departed on the 17th. On 12 February 1854, Susquehanna returned with the squadron to Japan to receive the signed treaty. The steamer departed Japanese waters on 24 March; and, after operating on the China coast, headed home via the Indian Ocean and the Cape of Good Hope. She arrived at Philadelphia on 10 March 1855 and was decommissioned on the 15th.

Recommissioned on 5 May 1856, the ship joined the Mediterranean Squadron in July. After serving as flagship, she returned and was laid up on 18 April 1858. Reactivated at the New York Navy Yard on 17 August I860, the steamer sailed for Vera Cruz a week later and thence preceded to the Mediterranean. On the outbreak of the Civil War in the United States, she departed La Spezia, Italy, on 5 May 1861 and reached Boston on 6 June.

The ship was assigned to the Atlantic Blockading Squadron and sailed for Hampton Roads. Late in August, Susquehanna participated in the joint Army-Navy expedition, to Hatteras Inlet, N.C., which captured Ports Clark and Hatteras on the 29th. During September, she captured two British schooners: Argonaut on the 13th and Prince Alfred on the 28th. In the same month, she also took two Confederate schooners as well: San Juan on the 28th and Baltimore the following day. All four ships were laden with contraband.

Late in October, Susquehanna joined Flag Officer DuPont's expedition to South Carolina waters which captured Port Royal Sound on 7 November; took possession of Beaufort on the 9th; and established a blockade at the mouth of the Broad River the same day. These operations provided the Union Navy with an important base for the future operations of the South Atlantic Blockading Squadron. Susquehanna served in this important squadron until the following spring, operating primarily on blockade duty off Charleston. There, she took British schooner Coquette on 3 April 1862, attempting to slip into Charleston from the Bahamas.

On 27 April, Susquehanna was ordered to Hampton Roads to strengthen the North Atlantic Blockading Squadron which was then making every effort to support Major General McClellan's drive up the peninsula toward Richmond. The Union forces in the area were then threatened by Confederate ironclad Virginia, the former USS Merrimack. Susquehanna and four other Union warships, acting under orders from President Lincoln, bombarded Confederate batteries at Sewell's Point, Va., on 8 May. Three days later, Virginia was blown up by her crew, ending her threat to Union shipping in the Hampton Roads area and freed Susquehanna for duty elsewhere.

Late in May, the double-ender was assigned to the West Gulf Blockading Squadron, and she carried dispatches for Flag Officer Farragut to the Gulf. En route, she captured Confederate schooner Princeton on 11 June, and sent the prize to Key West. On the 29th, she and Kanawha seized British steamer Ann trying to get into Mobile Bay with a cargo of arms and ammunition. Susquehanna continued to operate in the Gulf of Mexico until ordered to New York for repairs in the spring of 1863. While proceeding north, the warship captured schooner Alabama off the Florida coast on 18 April. She was decommissioned at the New York Navy Yard on 14 May 1863.

Recommissioned on 20 July 1864, Susquehanna was assigned to the North Atlantic Blockading Squadron and participated in the abortive attacks on Ft. Fisher, N.C., on Christmas Eve 1864. However, in mid-February 1865, the double-ender was in the mighty force which finally took that Confederate stronghold and closed Wilmington, the South's last major port.

Following the end of the Civil War, Susquehanna sailed for Brazil and operated on the Atlantic coast of South America until returning home and decommissioning on 30 June 1866. Recommissioned on 2 November 1866, the ship served as flagship of the North Atlantic Squadron and in the West Indies Squadron. While anchored in the harbor of St. Thomas on 18 November 1867, the side-wheel steamer rode out the tsunami effects of a nearby magnitude 7.5 earthquake without damage. Decommissioned at the New York Navy Yard on 14 January 1868, Susquehanna was laid up until she was sold for scrapping on 27 September 1883 at New York to E. Stannard of New York City.