Monongahela I (Screw Sloop of War) 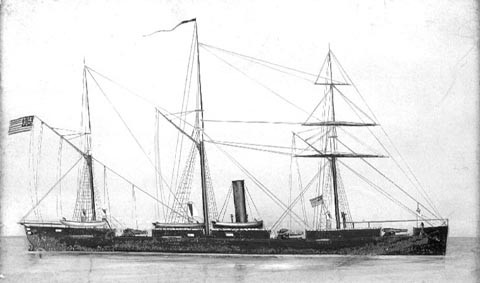 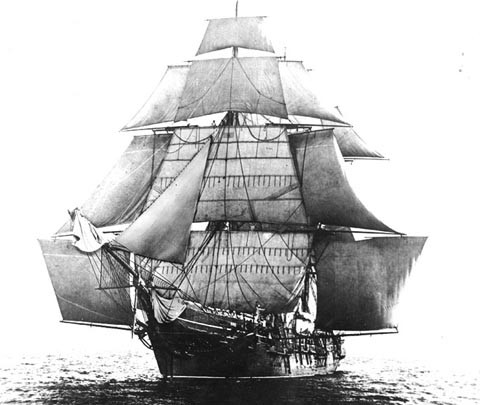 Caption: Monongahela under full sail in a light breeze, while serving as U.S. Naval Academy Practice Ship in the mid-1890s.

A river that flows north from Fairmont, W. Va., into southwest Pennsylvania to join the Allegheny at Pittsburgh, forming the Ohio. Entirely navigable by means of locks, the Monongahela is an important freight artery.

The first Monongahela, a barkentine rigged screw sloop of war, built by the Philadelphia Navy Yard. was launched on 10 July 1862; sponsored by Miss Emily V. Hoover, daughter of Naval Constructor Hoover who superintended the ships construction; and commissioned on 15 January 1863, Capt. James P. McKinstry in command.

Initially assigned to the North Atlantic Squadron, Monongahela sailed instead to reinforce Rear Adm. David G. Farragut-s West Gulf Blockading Squadron off Mobile, Ala., remaining on duty off that port until ordered to attempt to run past Confederate batteries on the Mississippi at Port Hudson, La., on the night of 14 to 15 March 1863. As Army forces ashore conducted a mortar bombardment, the squadron got underway about 2200, heavier ships Hartford, Richmond, and Monongahela screening the smaller Albatross, Genesee, and Kineo from the forts, steam frigate Mississippi bringing up the rear. In the course of the ensuing furious engagement, only Hartford and Albatross succeeded in passing up river, Richmond losing her steam power early in the battle and drifting downstream out of range with Genesee lashed alongside. Monongahela grounded under the guns of a heavy battery, taking a murderous pounding and losing six men killed and 21 wounded, including the captain, until she worked loose with Kineo-s aid. While attempting to continue upriver, her overloaded engine broke down, and the sloop was forced to drift downstream with Kineo. Venerable Mississippi, grounding at high speed, was hit repeatedly and set afire, eventually blowing up and ending the engagement.

Two months later, on 27 May, Confederate defenders turned back a major assault on Port Hudson following constant bombardment by Monongahela, serving as temporary flagship of Admiral Farragut, and other ships of the squadron. On 7 July 1863, the ship, in company with New London, engaged southern field batteries behind the levee 12 miles below Donaldsville, La., Monongahela-s new commanding officer, Commander Read, being killed in this action. She then departed on 26 October 1863 for Brazos Santiago, Tex., to support General Banks- troops in the capture of that town and Brownsville, 2 to 4 November, in addition capturing several blockade runners, Monongahela continued her duty off Texas, covering the landing of 1,000 Army troops on Mustang Island, Arkansas Pass, Tex., 16 to 17 November and supporting a Union reconnaissance at Pass Cavallo on the gulf shore of Matagordas Peninsula 31 December 1863 to 1 January 1864. She returned to blockade off Mobile soon after, stopping numerous blockade runners throughout the spring and summer of 1864. 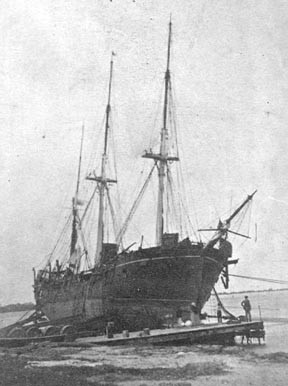 Caption: Monongahela stranded at Frederikstad, St. Croix, Virgin Islands on 4 March 1868 after an unsuccessful launching attempt. She was finally refloated on 11 May 1868. The steam sloop had received a bowsprit in 1865, but retained her original straight bow.

On 15 July, Monongahela's boats conducted a reconnaissance of the Mobile Bay area to determine the Confederate mine or torpedo defenses; and then, on 3 August, Admiral Farragut took his stripped-for-action squadron of 18 ships, including four monitors, against those defenses. In the fierce fight and great victory that followed, Monongahela served well, bombarding Confederate forts and then valiantly ramming the heavy Confederate ram Tennessee. The sloop succeeded only in damaging herself in the full speed drive into the armored enemy ship, but combined heavy gunfire from the other Union ships forced the Confederate warship to surrender, ending the battle and closing the last major gulf port to the South.

After receiving bow repairs, Monongahela remained on duty with the West Gulf Squadron until the end of the Civil War, and then received assignment to the West Indies Squadron. While so engaged, the warship had the unique experience of being landed high and dry almost a mile inland from the shoreline when a wave generated by an underwater earthquake struck Frederikstad, St. Croix, on 18 November 1867. The tsunami generated a roughly 20-foot high wall of water that wrecked the harbor, destroying buildings and shattering many small boats. The water also carried the screw sloop over the beach, warehouses and streets where she came to rest on an even keel some distance from the water. She lost not a soul, though the town suffered five people drowned. A working party of mechanics from New York Navy Yard under Naval Constructor Thomas Davidson succeeded in refloating the ship on 11 May 1868, following a four-month endeavor. Monongahela was towed to New York and thence Portsmouth where she was slowly repaired, finally departing in 1873 to join the South Atlantic Station.

Following a three-year cruise on that duty, the steam sloop served as a training ship off the east coast and then departed for the Asiatic Station, serving in the Far East until need of repairs took her to Mare Island Navy Yard in 1879 where she decommissioned. In 1883, the veteran warship was converted to a supply ship, with all her machinery being removed that fall to make additional room for supplies. During the conversion, her rig was changed to bark to allow her handling by a smaller crew. Monongahela, Lieutenant Commander William C. Gibson in command, departed Mare Island Navy Yard on the morning of 8 March 1890 in tow of the tug Queen of San Francisco. The weather, however, rain squalls and hail, proved too rough for her to make departure, even with assistance, so she anchored to await more favorable conditions. Monongahela called hall hands to "up anchor" on the morning of 10 March, and, assisted by the tug Sea Queen, sailed at midday for New York, "under all square sail and all fore and aft sail." Ultimately, she shortened sail and gave a tow line to the tug Emma Kate Ross of New York, and stood in to New York harbor on the evening of 24 June 1890, having made the voyage via Cape Horn in 106 days, at a time when the fastest passage as 97 and the average 145. She anchored off Ellis Island the following day. Monongahela remained there until she sailed for Portsmouth (New Hampshire) Navy Yard on 15 July, and brought her odyssey to an end when she worked into Portsmouth harbor on 18 July, coming to anchor at 6:10 p.m. that evening.

Fitted out as an apprentice training ship, Monongahela emerged from the refit to join the Training Squadron in 1891, serving in that capacity until relieving Constellation on 15 May 1894 as Naval Academy Practice Ship. Making annual cruises each year except for 1898 when the war with Spain intervened, the ship conducted her last Academy cruise from 6 June to 4 September 1899, sailing to England and Portugal. Upon completion of this cruise, Monongahela became training ship for apprentices at the Training Station, Newport, R.I., serving for three years in that capacity and cruising to ports throughout Europe's Atlantic coast and the Caribbean. Finally detached from the Atlantic Training Squadron on 9 May 1904, the old warship served as a storeship at Guantanamo Bay, Cuba, until destroyed by fire on 17 March 1908.