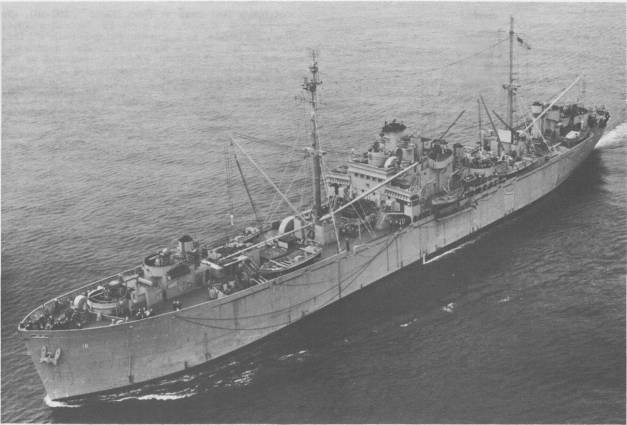 Kermit Roosevelt, born 10 October 1889 at Oyster Bay, Long Island, N.Y., was the second son of President Theodore Roosevelt. Following graduation from Harvard University in 1912, he accompanied his father to Brazil on an exploration expedition seeking the source of the River of Doubt and remained in South America for 4 years. In 1917 he was commissioned in the British Army to serve under General Maude in the Mesopotamia campaign. Transferring to the American Army in France in 1918, he served as a captain in the 7th Field Artillery until the end of the war.

At the outbreak of World War II in Europe in September 1939, he was recommissioned in the Middlesex Regiment of the British Army with the rank of major. In 1941, after serving in Norway and Egypt, he was "invalided out" of the British Army. In July 1942 he was commissioned Major in the U.S. Army and served in Alaska until his death 4 June 1943.

After shakedown along the Virginia coast, Kermit Roosevelt departed Norfolk 21 July for duty in the Pacific. Steaming via Pearl Harbor and Okinawa, she arrived Tsingtao, China, 16 October and began service as a station repair ship. A unit of SerRon 10, she supported U.S. Naval forces aiding the Chinese Nationalists on the Chinese mainland. She departed Tsingtao 11 March 1946 and arrived Hong Kong 16 March for 5 months of similar duty. There after serving briefly at Guam and Saipan, she returned to Bremerton, Wash., 3 February 1947.

Clearing San Pedro Bay 21 April, Kermit Roosevelt returned to Tsingtao 4 September and provided ship repair services there until 28 February 1949. Then she continued operations in the Philippines and the Pacific until departing Kwajelein, Marshalls, for the West Coast 8 June. Steaming via Pearl Harbor, she reached San Diego 24 July. On 23 January 1950 she sailed for the Central Pacific; and, before returning to San Diego 12 June, she provided repair facilities at Kwajelein and Majuro, Marshalls; Truk, Carolines; and Nauru, Gilberts.

Between 10 July 1950 and 23 October 1953 Kermit Roosevelt made four deployments to the Far East. Operating out of Sasebo, Japan, she repaired ships fighting Communist aggression in Korea and keeping the peace in the Strait of Formosa. From 10 October to 27 November 1950 she supported Task Group 95.6 at Wonsan, Korea, and during 13 to 23 December she performed similar duty at Hungnam for ships of Task Group 79.2. And while operating out of Pusan from 7 August to 16 September 1953, she helped salvage SS Cornhusker Marine.

Kermit Roosevelt returned to Long Beach 23 October 1953 and operated along the West Coast until she again sailed for the Far East 6 October 1954. Between then and 30 April 1956 she made two more deployments to the Western Pacific, where she provided important repair services for the 7th Fleet by maintaining U.S. sea power, helped contain Communist aggression from Korea to Vietnam. After returning to the United States in 1956, Kermit Roosevelt operated out of Long Beach until she departed 1 October 1959 for Bremerton, Wash., arriving 7 October. She decommissioned 31 October and entered the Pacific Reserve Fleet. Her name was struck from the Naval Register 1 January 1960, and she transferred to the Maritime Administration 23 June. On 25 August 1960 she was sold to Zidell Explorations Inc. for scrap.