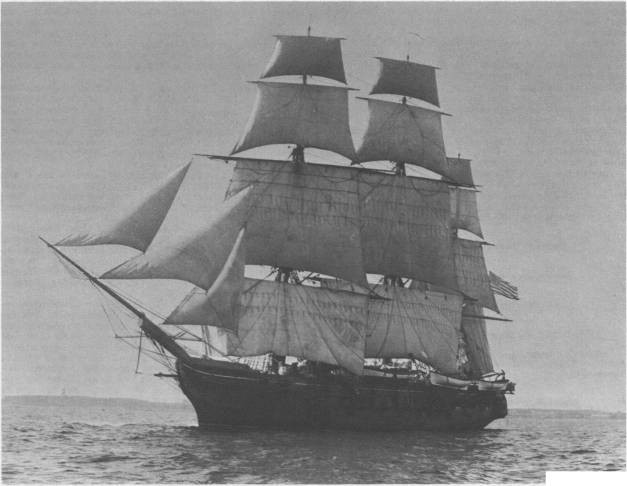 Jamestown, Va., is the earliest permanent settlement established by Englishmen in North America.

The first Jamestown was launched in 1844 by the Navy Yard, Gosport, Va.; and commissioned there 12 December, Comdr. Robert B. Cunningham in command.

She departed Hampton Roads 25 June 1845 as flagship of Commodore Charles W. Skinner in command of United States naval vessels operating off the western coast of Africa to suppress the slave trade. At the end of her first deployment the sloop arrived Boston 6 August 1846.

While she was moored at the Boston Navy Yard word reached the United States that for the second consecutive year blight had ruined the potato crop of Ireland, depriving the people of that country of their chief means of subsistence. A joint resolution of Congress approved 3 March 1847 authorized the Secretary of the Navy to place Jamestown and Macedonian at the disposal of Captains Robert B. Forbes and George C. DeKay to carry food to the starving poor of Ireland. Jamestown sailed from Boston 28 March and arrived Cork, Ireland, 12 April. After unloading her life-saving cargo, the sloop returned to Boston 17 May.

As flagship of Commodore W. C. Bolton, Jamestown again stood out of Boston 22 July to operate on the west coast of Africa. A year later she was transferred to the Mediterranean Squadron to assist in protecting American citizens and interests during the epidemic of revolutions which convulsed Europe in 1848. After political conditions became more stable, Jamestown returned to Norfolk 4 May 1850.

After a year at home, she was assigned to the Brazil Squadron departing Norfolk 1 June 1851 to begin operations off South America lasting until her return to Philadelphia Navy Yard 2 May 1854. She decommissioned there 9 days later.

After the outbreak of the Civil War, Jamestown re-commissioned 5 June 1861 and was assigned to the Atlantic Blockading Squadron, where she compiled a record of outstanding efficiency. The sloop chased bark Alvorado ashore off Fernandina, Fla. and set her on fire 5 August and captured schooner Aigburth off the coast of Florida 31 August 1861. Four days later she captured, dismantled, and scuttled schooner Col. Long. Next she captured schooner Havelock 15 December. Her final prize was brig Intended, taken off Wilmington 1 May 1862.

Jamestown departed for the Pacific 12 October to protect American commerce from Confederate privateers; and she remained on that duty until after the end of the war, decommissioning at Mare Island 17 September 1865.

Having been converted to a transport and store ship, she recommissioned 3 September 1866 to serve at Panama as a store and hospital ship. Because of fever on board, Jamestown was ordered north 2 April 1867 and was disinfected at San Francisco. Joining the North Pacific Squadron, she served as guard and storeship at Sitka, Alaska, from 11 September 1867 until 30 May 1868. Jamestown was present at the hoisting of the U.S. Flag at Sitka 18 October 1867 after Alaska was purchased from Russia, one of the significant steps in the growth of the United States to world leadership.

Jamestown arrived at Mare Island 23 July 1868; decommissioned there 13 August; and recommissioned 25 January 1869, following repairs. For almost 3 years, Jamestown cruised the Pacific on the west coasts of North and South America, and as far west as Tahiti and the Fiji and Hawaiian Islands.

Decommissioning 7 October 1871, Jamestown was placed in ordinary at Mare Island until 16 March 1876 when she recommissioned for use as a State Public Marine School. She operated at the Hawaiian Islands in this capacity until she was returned to the Navy Department and decommissioned 3 March 1879.

She recommissioned 8 May and sailed for Sitka, Alaska, where she surveyed the harbor and protected American interests. In 1881, she sailed the Pacific until decommissioning at San Francisco 21 September.

Having been fitted out as an apprentice training ship, Jamestown recommissioned 14 February 1882 and proceeded to the Atlantic coast via Cape Horn. In her new capacity, she sailed the Atlantic Ocean, voyaging to the West Indies, Spain, and as far north as the State of Maine. On 31 August 1888, she decommissioned at Norfolk.

Recommissioning 13 April 1889, Jamestown cruised to France and to the West Indies with apprentices, and decommissioned again 6 September 1892 at Norfolk.

On 9 September she was transferred to the Treasury Department for Marine Hospital Service for quarantine purposes in Hampton Roads. She was destroyed by fire at the Norfolk Navy Yard, 3 January 1913, after being returned to the Navy Department.