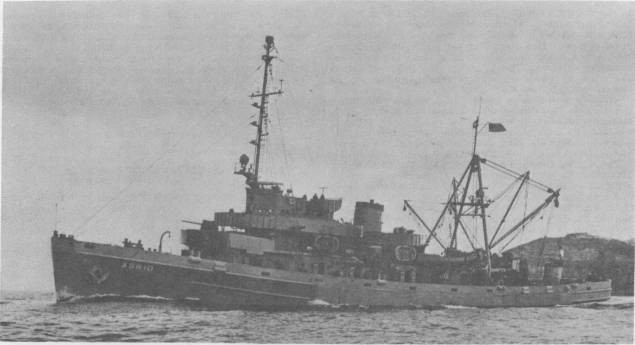 Any of several grayish, plainly colored, sweet singing birds of the vireo family, found primarily in the eastern United States.

After shakedown, Greenlet conducted patrol and escort runs out of San Diego before sailing for Pearl Harbor 24 July. Constructed as a submarine rescue ship, she served at Pearl Harbor and at Midway for more than a year, making escort runs and conducting refresher training for patrol-bound submarines. As the progress of the war advanced steadily across the Pacific, she sailed to Guam 21 December 1944 to carry invaluable submarine training closer to the patrol areas.

While at Midway and Guam, Greenlet helped train some 215 submarines, among them such fighting boats as Tang, Tautog, Barb, Snook, Drum, and Rasher. Indirectly, she contributed to the sinking of 794 enemy ships, including a battleship and 6 aircraft carriers. Eleven of the submarines trained by Greenlet were lost during the war, but her charges sank more than 2,797,000 tons of Japanese military and merchant shipping.

As the bloody war in the Pacific drew to a close, Greenlet departed Guam for Japan 16 August 1945. She reached Sagami Wan, Honshu, 28 August; entered Tokyo Bay the following day; and was present during the signing of Japanese surrender 2 September. After placing buoys over wrecks in the harbor and channel at Tokyo, she stripped and demilitarized Japanese miniature submarines based in Yokosuka harbor. On 1 November she escorted three Japanese fleet submarines to Sasebo and converted them for American crews. Departing Sasebo 11 December, she escorted former Japanese submarines I-1.4, I-400, and I-401 to Pearl Harbor, where she arrived via Guam and Eniwetok 6 January 1946.

After returning to San Francisco early in 1946, Greenlet spent the following 5 years operating primarily out of San Diego where she trained divers and serviced submarines. From September 1946 to May 1947 and from September 1948 to March 1949 she deployed to the Western Pacific. Operating from the coast of China to the Philippines, she trained and supported fleet submarines stationed in the Far East.

As a result of Communist aggression in South Korea, Greenlet departed San Diego for the Far East 6 July 1950 During the next 6 months she operated out of Yokosuka while providing valuable services to the fighting submarine fleet. Sailing for Pearl Harbor 6 January 1951, she served there throughout the remainder of the Korean conflict and continued to provide assistance in the training of submarine crews.

Since the Korean Armistice in 1953, Greenlet has remained at Pearl Harbor, training divers and submariners, participating in readiness operations, and assisting in servicing and salvaging operations. On 29 May 1958 she unsuccessfully attempted to keep Stickleback (SS-415) afloat rammed during exercises off Ohau, Hawaii.

Between 1953 and 1967 Greenlet made eight deployments to the Western Pacific. Operating from Japan and Okinawa to the Philippines and Australia, she rendered training and repair services to submarines, trained divers, and participated in mine recovery and submarine rescue and salvage exercises. During rescue training duty 6 January 1964, she sent her submarine rescue chamber to a depth of 942 feet off the coast of Japan. From the conflict in Korea to the conflict in Vietnam-she helped keep the men and boats of the submarine service ready to meet the vast responsibilities in the tension filled Far East.

Into 1967 the vital task of "keeping the peace" presents a greater challenge than ever before. To meet this challenge and to preserve the peace, she remains on duty with the U.S. Pacific Submarine Fleet, filling a most useful and vital role for the security of the free world and for the forces of freedom in Southeast Asia.