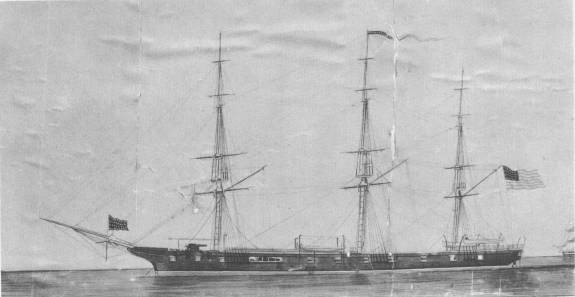 Caption: An artist's impression of USS Wachusett. Her forward pivot gun is mounted on a platform which raises it above her spardeck bulwarks. (Peabody Museum of Salem, Mass.) (NH 68681)

The first Wachusett was named for the river of that name. The word is a Natick Native American term which means "near the mountain."

The first Wachusett, one of seven screw sloops-of-war authorized by Congress in February 1861, was laid down by the Boston Navy Yard, Boston, Mass., in June 1861; launched on 10 October 1861; sponsored by Miss Mary C. Frothingham, daughter of Richard Frothingham [Jr.], a Massachusetts historian, journalist, and politician; and commissioned at her building yard on 3 March 1862, Cmdr. John S. Missroon in command.

Wachusett's long and eventful career began on 10 March 1862 with her assignment to the North Atlantic Blockading Squadron. The warship left Boston two days later and arrived in Hampton Roads, Va., on the 16th. She was deployed in the York and James rivers, Va., and performed valuable service in support of Major General George B. McClellan's Peninsular Campaign of spring 1862. On 4 May, a boat crew from Wachusett raised the Stars and Stripes at Gloucester Point, Va., following the Union occupation of Yorktown, Va.; and, on the 6th and 7th, the vessel helped to land troops at West Point, Va., in the face of Confederate shore fire. Soon thereafter, the screw sloop moved to the James and, on the 15th, participated in the attack on Fort Darling, Drewry's Bluff, Va. She remained in the York and James rivers through August and later served with the Potomac Flotilla as Commodore Charles Wilkes' flagship from 29 August to 7 September.

On 8 September 1862, Wachusett was designated flagship of a special "Flying Squadron" under Commodore Wilkes. This squadron of seven vessels was deployed in the West Indies with orders to search for the destructive and elusive Confederate commerce raiders CSS Alabama and Florida. On 18 January 1863, Wachusett and Sonoma captured the Southern merchant steamer Virginia off Mugueres Island, Mexico, and took the British blockade runner Dolphin between Puerto Rico and St. Thomas Island on 25 March. However, all efforts to track down Alabama and Florida failed; Wachusett returned to Boston in May for badly needed repairs. She was later decommissioned at the Philadelphia Navy Yard on 19 June 1863.

Repairs completed, Wachusett was recommissioned on 28 January 1864. On 4 February, she sailed for the coast of Brazil to protect American commerce from the Confederacy's "piratical cruisers," particularly Alabama and Florida. Many months passed tracking down fruitless leads as to the whereabouts of the two vessels. Finally, on 4 October, Cmdr. Napoleon Collins of Wachusett sighted Florida, Lt. Charles M. Morris, CSN, entering Bahia harbor, Brazil. Collins dared Lt. Morris to come out and fight, but the Confederate captain prudently declined.

Collins, however, proved determined not to allow Florida to slip away. In the early morning darkness of the 7th, Wachusett got underway at 3:00 a.m., steamed past the Brazilian gunboat anchored between his ship and Florida, and rammed the raider on her starboard quarter. After a brief exchange of fire, Lt. Thomas K. Porter, CSN, commanding Florida in Morris's absence, surrendered the ship. Aroused by the commotion, the Brazilian coastal fort at Bahia opened fire on Wachusett as she towed her prize to sea. The two vessels escaped unscathed, steamed north, and reached Hampton Roads on 11 November 1864. Collins was promptly court-martialed for the incident, but soon after was restored to his command by Secretary of the Navy Gideon Welles.

After undergoing repairs at the Boston Navy Yard, Wachusett got underway on 5 March 1865 and sailed, via the Cape of Good Hope, for the East Indies. There, she joined Wyoming and Iroquois in an effort to track down the Confederate commerce raider CSS Shenandoah. She remained in Chinese waters into 1867. Upon her return to the United States, she was decommissioned on 4 February 1868 and was placed in ordinary at the New York Navy Yard, Brooklyn, N.Y.

Recommissioned on 1 June 1871, Wachusett left New York a week later, bound for the Mediterranean where she cruised until November 1873. Returning home, she served along the Atlantic and gulf coasts for a year before she was decommissioned at Boston on 29 December 1874. Wachusett remained laid up at Boston for five years and was recommissioned on 26 May 1879. She sailed for the Gulf of Mexico on 5 June and visited New Orleans and Vicksburg to enlist seamen before returning to Boston in August.

On 2 October 1879, Wachusett left Boston for the South Atlantic Station where she cruised until May 1880. She then sailed for the Pacific, arriving off the coast of Chile in June. The vessel remained on the Pacific Station, cruising extensively until September 1885 when she was decommissioned at the Mare Island Navy Yard, Vallejo, Calif. Wachusett was sold there to W. T. Garratt & Co. on 30 July 1887.