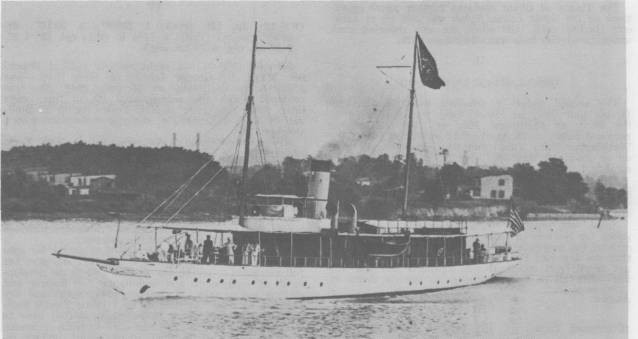 Caption: USS Sylph (PY-12) steams down the Potomac River. The skyline of Washington can be seen in the background.

Intrepid (YP-71), a yacht built in 1929 at Neponset, Mass., by George Lawley & Sons Corp., was acquired by the Navy on 16 July 1940. She was renamed Sylph and redesignated PY-12 three days later. After conversion in New York City by the Sullivan Drydock & Repair Co., she was commissioned on 1 October 1940.

After commissioning, she remained at New York, assigned to the 3d Naval District to train reserve midshipmen. Soon after America's entry into World War II, Sylph was fitted with sound gear and depth charges and assigned to Tompkinsville, N.Y., to help patrol for German U-boats. On 10 February 1942, she was reassigned to New London, Conn., whence she continued to hunt for submarines. While at New London, Sylph also helped periodically to train sonarmen, so sorely needed in the Battle of the Atlantic.

In the fall of 1943, Sylph ceased to patrol for submarines. Assigned to Quonset Point, R.I., she gave her full attention to training sonarmen and to the development of equipment and techniques for finding and sinking submarines. In October 1944, Sylph and her unit, the Surface Division of the Atlantic Fleet's Antisubmarine Development Detachment, shifted base to Port Everglades, Fla. She continued to train sonarmen there and assisted in the antisubmarine warfare research effort through the end of World War II.

In September 1945, Sylph was ordered to the Commandant, 6th Naval District, at Charleston, S.C. She arrived at Charleston on 8 November and was decommissioned on 19 December. Her name was struck from the Navy list on 8 January 1946, and her hulk was sold by the War Shipping Administration on 31 December 1946.