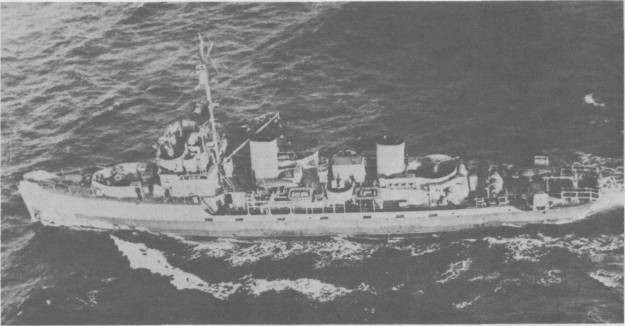 Caption: USS Speed (AM-116) during World War II. Gear for sweeping contact and magnetic mines is mounted on her fantail. A Hedgehog projector is mounted forward, with K-guns and depth-charge tracks astern.

Departing Cleveland on 15 November, Speed proceeded to Boston, Mass., where she arrived on 8 December. During the next three months, she conducted shakedown and training along the Atlantic Coast from Casco Bay, Maine, to Norfolk, Va., before departing New York on 19 March 1943 for the Mediterranean. As escort for an eastbound convoy, she sailed via Bermuda and arrived at Tunis, Tunisia, on 13 April.

Assigned to Mine Division 17, Speed conducted coastal patrols off the coast of Algeria during the next two months. On 5 July, she departed Mers-el-kebir, Algeria, and joined Vice Admiral H. K. Hewitt's Western Naval Task Force for the invasion of Sicily. Steaming with ships of Task Force 85, she closed the Sicilian coast off Scoglitti on 10 July and served as a control ship during amphibious assaults.

Following the invasion, Speed swept waters along the southern and western coasts of Sicily. After sweeping off Palermo, she escorted supply convoys between Tunisia and Sicily from 10 to 23 August. On 25 August, she sailed for Algeria and arrived at Oran on the 29th to prepare for the invasion of Italy.

As a unit of Rear Admiral J. L. Hall's Southern Attack Force, Speed departed Oran on 5 September and arrived off the Gulf of Salerno late on 8 September. She swept channels during the landings the next day and operated in the Gulf of Salerno on mine and antisubmarine patrols until 26 September. While on patrol on the 25th, she rescued survivors of Skill (AM-115) after that minesweeper had been fatally hit by an enemy torpedo.

Speed departed Salerno on 26 September and escorted a convoy of merchant ships to Bizerte, Tunisia. Interspersed with minesweeping and ASW patrols, she performed escort duties during the next nine months as she screened supply and reinforcement convoys from North Africa to Sicily and Italy. While steaming in convoy from Oran to Bizerte on 20 April 1944, she helped repulse a determined German air attack which sank three ships, including Lansdale (DD-426).

After returning to Naples on 20 June, Speed operated in the Gulf of Salerno until 7 August preparing for the invasion of southern France. Assigned to Task Force 87, she departed Salerno on 12 August and escorted an LCI convoy to the assault area off Frejus and St. Raphael. She closed the French coast early on 15 August and served as a glider bomb -jam ship- and in the ASW screen during amphibious landings. She operated along the French coast during the next few weeks, sweeping channels and clearing harbors from Frejus to Toulon. After two escort runs to North Africa, she departed Oran for the United States on 24 November and arrived at Norfolk on 11 December to begin a two-month overhaul.

Speed departed Norfolk on 15 March 1945 for mine-sweeping duty in the western Pacific. Steaming via the Panama Canal and San Diego, Calif., she reached Pearl Harbor on 31 May. Between 11 June and 12 July, she steamed to Okinawa via the Marshall and Marianas Islands. Assigned to Mine Squadron Six, she swept the waters of the Ryukyus during the closing weeks of World War II. After the end of hostilities, she departed Okinawa on 1 September for sweeping operations along the coast of Japan. Arriving at Kagoshima, Kyushu, on 3 September, she swept Kagoshima Wan and Van Diemen Strait before returning to Okinawa on 13 September.

During the remainder of 1945, Speed continued minesweeping operations in support of the Allied occupation of Japan. Her duties carried her to Bungo Suido and the Inland Sea, as well as to the East China Sea and waters off Formosa. She returned to the United States early in 1946, was decommissioned on 7 June, and entered the Pacific Reserve Fleet at San Diego. She was reclassified MSF-116 on 7 February 1955. On 17 November 1967, Speed was transferred to the Republic of Korea, and she served the Korean Navy as Sunchon (PCE-1002).