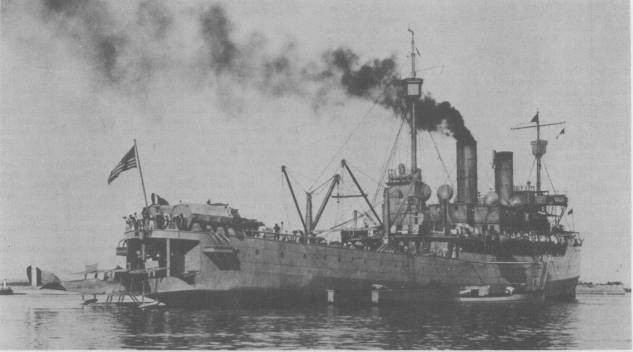 Caption: The former minelayer Shawmut at Guantanamo Bay, Cuba, in the early 1920's. During fleet exercises after World War I, efforts were made to integrate naval aviation with fleet operations. Here, Shawmut services a Curtiss N-9 seaplane, a float-equipped development of the JN-4 Jenny trainer.

Villages in Alabama and Maine.

The first Shawmut, a screw gunboat begun on 2 February 1863 by the Portsmouth (N.H.) Navy Yard, was launched on 17 April 1863; sponsored by Miss Lucy Hall; departed Portsmouth on 20 October 1863; was towed to New York where her engine and machinery were installed by the South Brooklyn Works; was delivered to the Navy on 16 October 1864; and commissioned at the New York Navy Yard on 1 November 1864, Lt. Comdr. George U. Morris in command.

Two days later, Shawmut got underway to search for Confederate Navy commerce raider, Tallahassee (renamed Olustee), which had recently preyed upon Northern shipping off the Delaware capes. After cruising in Nova Scotian waters without seeing or hearing of her quarry, Shawmut returned to the Portsmouth Navy Yard on the 20th.

On 9 January 1865, the gunboat was ordered to proceed to Wilmington, N.C., to join the North Atlantic Blockading Squadron. She participated in the attack on and capture of Fort Anderson, N.C., from 18 to 20 February. On the latter day, a boat from Shawmut was destroyed by a torpedo (the Civil War term for a mine) as it swept waters in the area.

In March, as Grant's operations around Richmond approached their climax, Shawmut was called back to Hampton Roads and stationed in the York River "to keep open free navigation between White House and the mouth of the York River." With the fall of Richmond and Lee's surrender, Shawmut was ordered north and decomissioned at the New York Navy Yard on 17 April 1865.

Refitted for foreign service, the gunboat was recommissipned on 15 June 1865 and soon sailed for Bahia, Brazil. Following over a year's service on the Brazil Station protecting "our flag from insult and the property of our citizens from unlawful seizure," Shawmut returned home and was decommissioned at the New York Navy Yard on 8 December 1866.

Recommissioned on 12 August 1867, Shaiomut served in the North Atlantic Squadron until she was laid up again at New York on 7 July 1868. Reactivated once more on 18 March 1871, the ship resumed service in the North Atlantic and served along the Atlantic seaboard until finally laid up at the Norfolk Navy Yard on 22 January 1877. She was sold on 27 September to E. Stannard & Co., Westbrook, Conn.