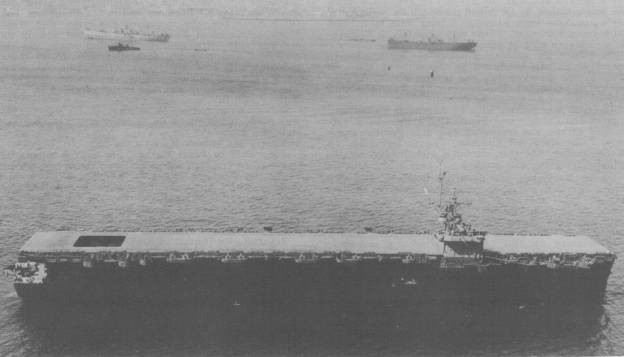 A bay in Alaska on the western shore of the Behm Canal, opposite Rudyerd Bay.

Following shakedown, Sargent Bay completed a ferry trip to the central Pacific with replacement aircraft before reporting to the 3d Fleet at Pearl Harbor on 17 August. The following day, she sailed for Eniwetok and Manus; and, on 6 November, departed the latter for the first of four tours of duty with underway replenishment groups off the Philippines. While the carrier's planes patrolled overhead, the other units of the replenishment groups provided fuel and replacement aircraft to the fast carriers, enabling them to remain at sea for extended periods. Later based at Ulithi, Sargent Bay remained on this duty until 27 January 1945, with individual tours at sea lasting from two to four weeks.

In February 1945, Sargent Bay undertook a new assignment and arrived off Iwo Jima on the 16th to provide air support for the landings there. Her air craft flew artillery spotting and ground support missions, and antiaircraft and antisubmarine patrols until the ship departed Iwo Jima on 11 March. She provided similar support during the Okinawa campaign from 25 March to 20 June 1945, with time out only for a period in support of the Logistics Support Group between 7 and 18 April and for repairs at Guam from 15 May to 2 June. The ship arrived off Leyte on 23 June for a month of upkeep, and then sailed for overhaul in the United States, arriving at San Pedro, Calif., on 9 August.

On completion of repairs, Sargent Bay was assigned to "Magic Carpet" duty. She made two trips bringing troops from Hawaii in October, and two more in November and December from Eniwetok and Okinawa. She arrived at Boston, Mass., for inactivation on 23 March 1946, and was decommissioned and placed in reserve there on 23 July 1946.