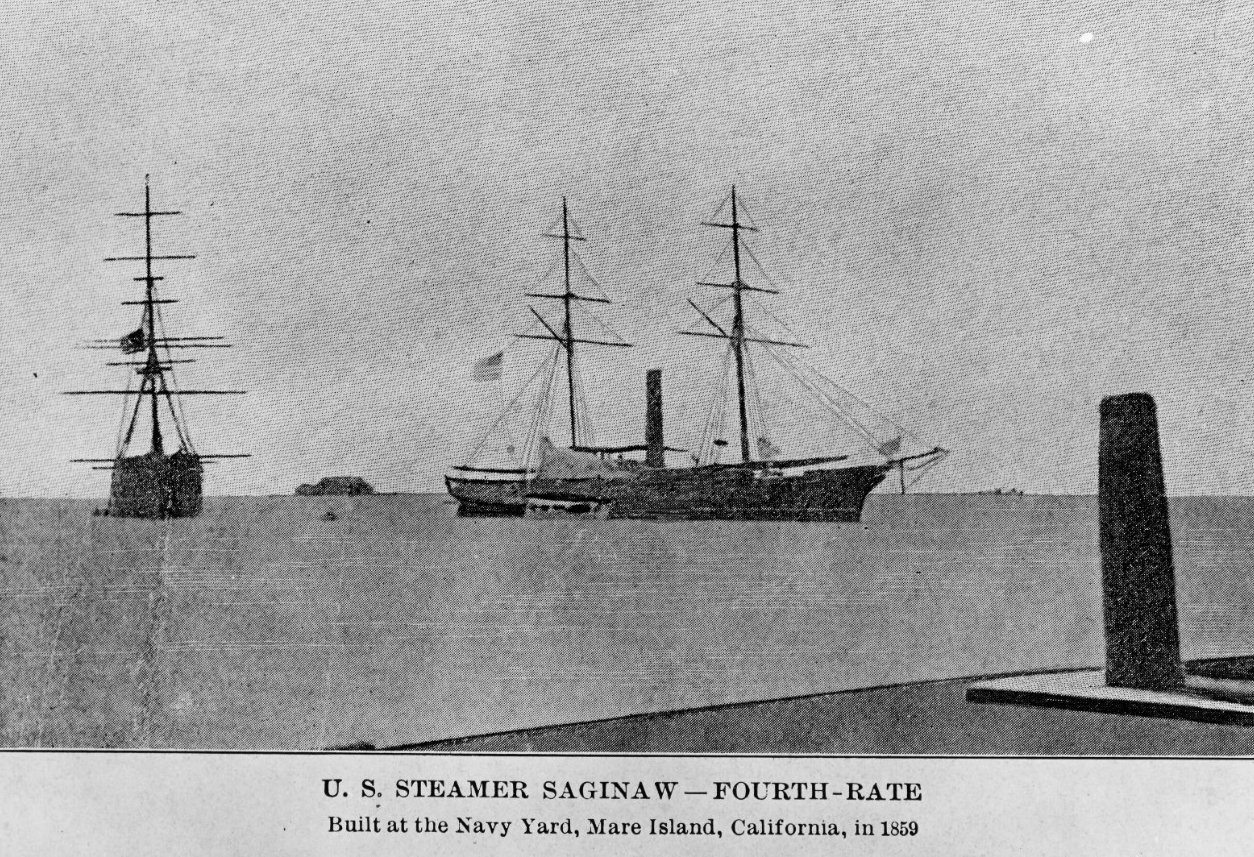 A river in central Michigan formed by the confluence of the Flint and Shiawassee rivers and flowing north to empty into the Saginaw Bay of Lake Huron.

Saginaw, the first vessel of the "long line of ships" built by the Mare Island Navy Yard, was laid down on 16 September 1858; launched as Toucey on 3 March 1859; sponsored by Miss Cunningham, daughter of the commandant of the navy yard; renamed Saginaw; and commissioned on 5 January 1860, Comdr. James F. Schenck in command. 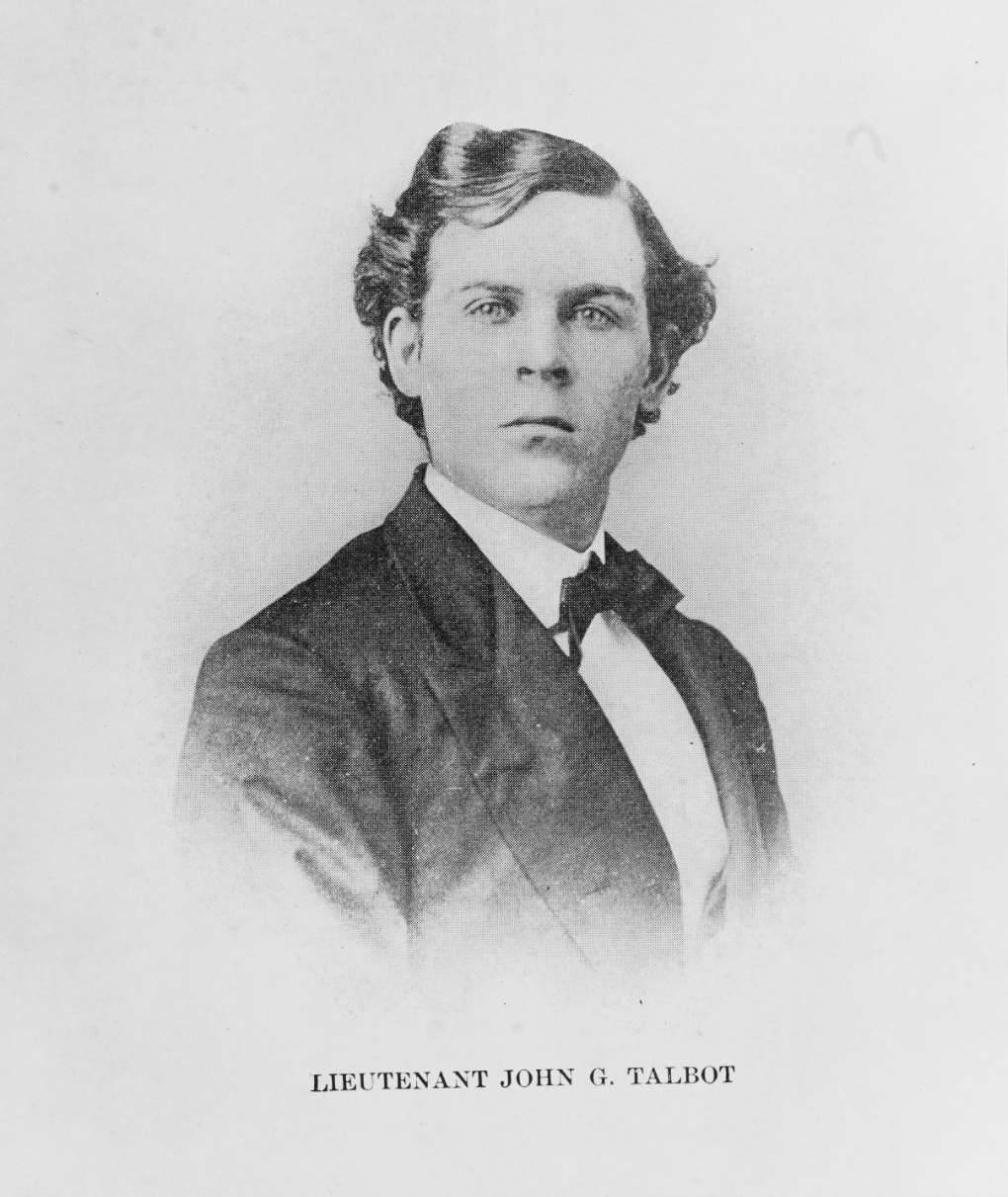 Lieutenant John G. Talbot, USN. He volunteered and navigated the Saginaw's gig a distance of 1,400 miles to the Sandwich Islands and was drowned when the boat was in sight of land. Naval History and Heritage Command photograph, NH 625.

The new side-wheel steamer sailed from San Francisco Bay on 8 March 1860, headed for the western Pacific, and reached Shanghai, China, on 12 May. She then served in the East India Squadron, for the most part cruising along the Chinese coast to protect American citizens and to suppress pirates. She visited Japan in November but soon returned to Chinese waters. On 30 June 1861, she silenced a battery at the entrance to Quinhon Bay, Cochin China, which had fired upon her while she was searching for the missing boat and crew of American bark, Myrtle.

On 3 January 1862, Saginaw was decommissioned at Hong Kong and returned to Mare Island on 3 July for repairs.

Relaunched on 3 December 1862 and recommissioned on 23 March 1863, the side-wheeler was attached to the Pacific Squadron and operated along the western seaboard to prevent Confederate activity. She visited Puget Sound that spring to investigate reports that Southern privateers were being outfitted in British Columbia but returned after learning that the scheme had no chance of success.

Her cruises during 1864 took Saginaw to ports in Mexico and Central America to protect the interests of the United States endangered by Confederate activity and by European interference in Mexico. During the closing months of the year, she escorted steamers of the Pacific Mail Steamship Company carrying rich cargoes of bullion from the California gold fields. In the spring of 1865, the ship was assigned to the Revenue Service but was returned to the Navy on 2 June. She spent the remainder of the year protecting American citizens at Guaymas and other Mexican ports during the unrest and disorder which beset Mexico during the struggle between Maximilian and Juarez. 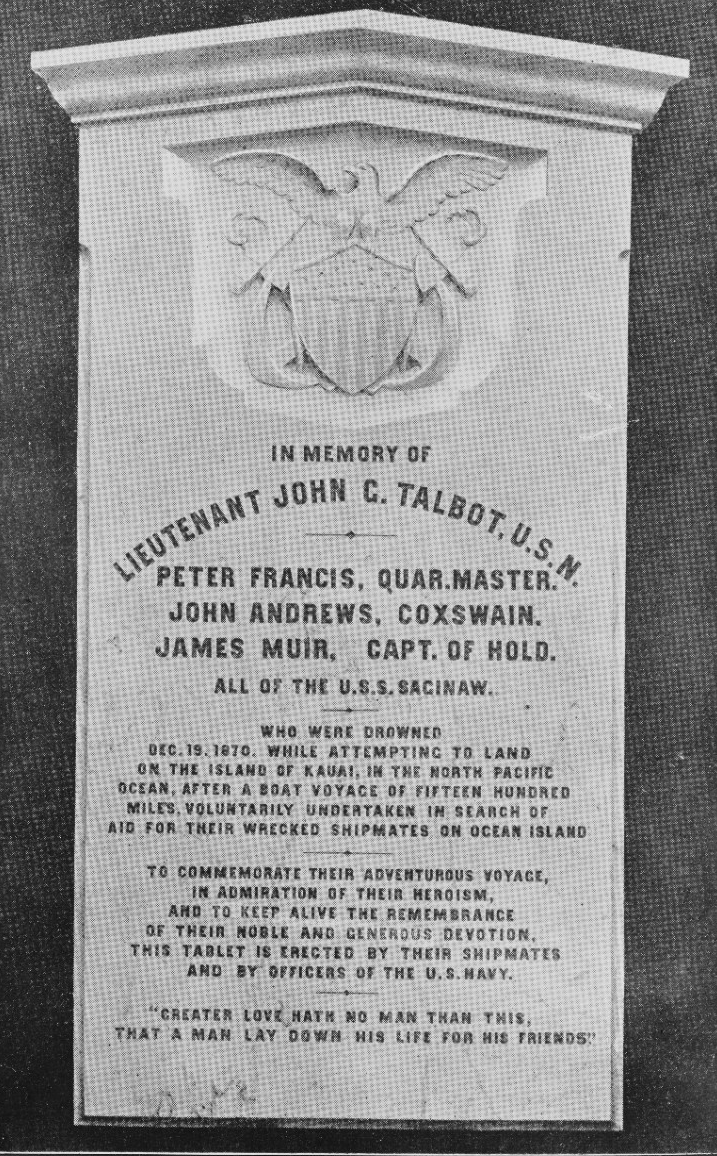 In memory of the men (Lieutenant John G. Talbot, USN; Peter Francis, Quarter Master; John Andrews, Coxswain; James Muir, Captain of Hold.) of Saginaw, who were drowned, 19 December 1870, while attempting to land on the Island of Kauai. "The tablet now on the walls of the chapel at the United States Naval Academy."

In March 1866, Saginaw returned to Mare Island. She sailed in August for Puget Sound to support settlers in the northwest. While there, she aided the Western Union Company in laying a cable which first brought telegraphic service to the region. After returning to Mare Island in December, the ship remained at the navy yard through 1867.

In April 1868, Saginaw got underway for Alaska and, with the exception of a run home late in the year for replenishment, spent the next 12 months exploring and charting the coast of that vast, newly acquired territory. After steaming back to San Francisco Bay in April 1869, the ship departed her home port on 28 July and operated along the coast of Mexico until arriving back at Mare Island on 11 November.

Saginaw's next assignment took her to Midway Island to support dredging operations to deepen the entrance to the harbor. She reached Midway on 24 March 1870 and completed her task on 21 October. A week later, she sailed for San Francisco, intending to touch at Ocean Island en route home to rescue any shipwrecked Sailors who might be stranded there. The next day, 29 October, as she neared this rarely visited island, Saginaw struck an outlying reef and grounded. Before the surf battered the ship to pieces, her crew managed to transfer much of her gear and provisions to the island.

On 18 November, a party of five men, headed by Lt. John G. Talbot, the executive officer, set out for Honolulu in a small boat to get relief for their stranded shipmates. As they neared Kauai, 31 days and some 1,500 miles later, their boat was upset by breakers. Only Coxswain William Halford survived to obtain help for the marooned men of Saginaw. 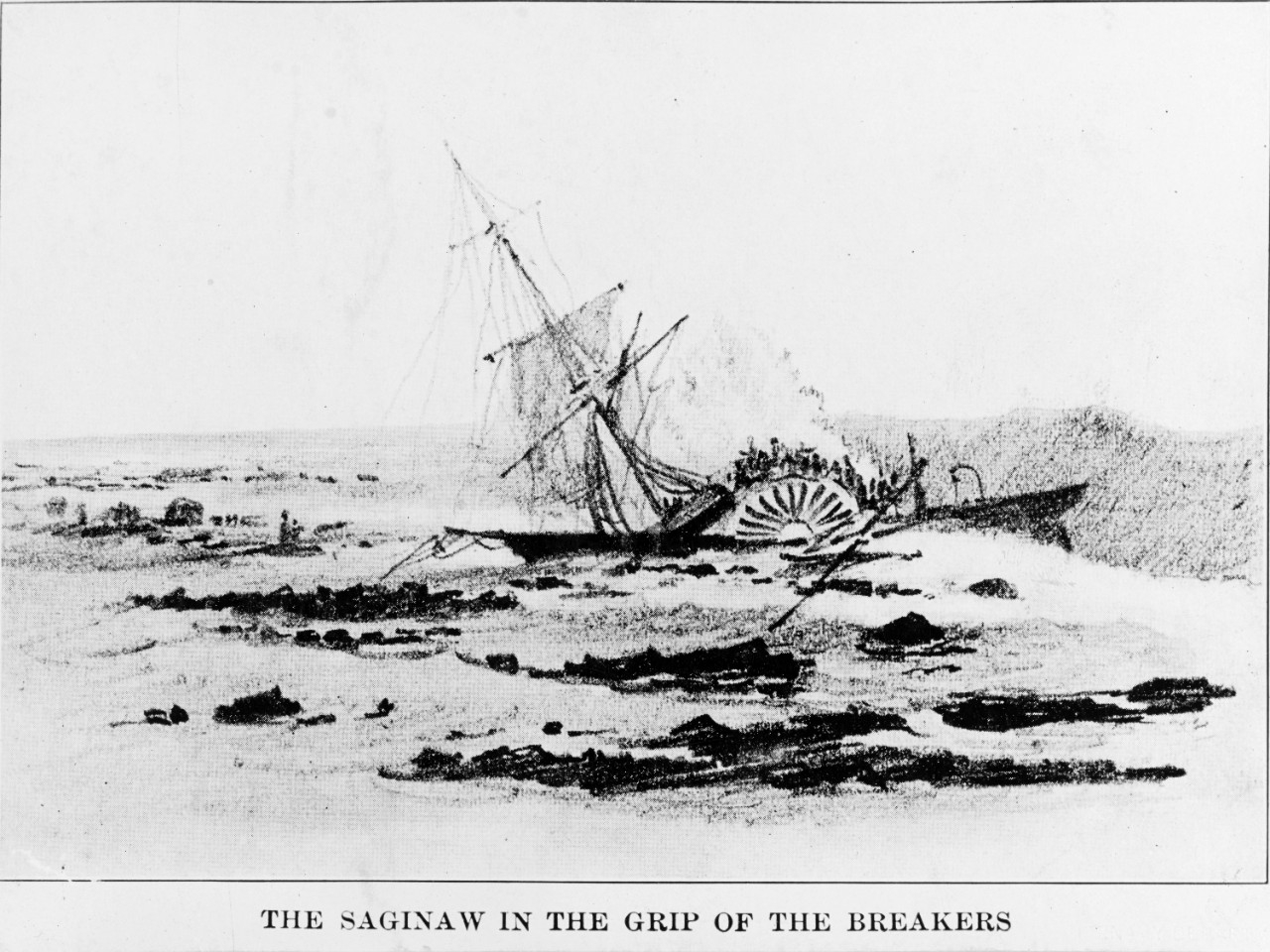