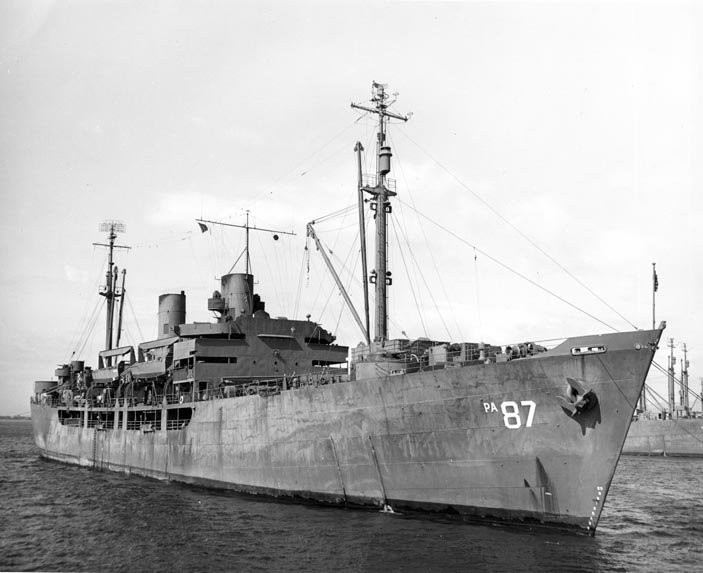 After loading commissioning supplies, equipment, provisions, fuel, and ammunition (30 March-1 April 1945), Niagara underwent post-commissioning availability at the U.S. Naval Drydocks, Terminal Island, Calif. (2-7 April) before she carried out shakedown training in the waters off San Pedro under the direction of the Commander, San Pedro Shakedown Group (8-21 April). She then conducted amphibious training and drills off San Diego, Calif., under Commander, Ship Training Group, Training Command, Amphibious Forces, Pacific Fleet (22 April-6 May), before she underwent post-shakedown availability at the Consolidated Steel Company’s Pico Street yards, Long Beach, Calif. (7-18 May), a period of work extended briefly by the shipment of certain required materials from Pittsburgh, Pa., that could not occur until 14 May. After carrying out post-repair trials off San Pedro, the ship fueled, loaded ammunition, stores and provisions (19-23 May), then reported to Commander in Chief, U.S. Pacific Fleet, for duty.

After loading cargo and mail, Niagara embarked 38 officers and 649 enlisted men of the 66th Replacement Battalion, USMC (24-26 May 1945), then sailed for the Hawaiian Islands.  Proceeding independently, she reached Pearl Harbor, T.H., on 1 June. After disembarking her passengers and discharging cargo, the ship conducted amphibious training under Commander, Task Unit (TU) 13.10.13 near Maalaea Bay, Maui, T.H. (3-7 June) before returning to Pearl to await orders (7-14 June). For the remainder of the month, Niagara shuttled troops, cargo, ammunition, and mail, between various Hawaiian islands, proceeding to Kahului, Maui, then to Hilo, back to Kahului; thence to Pearl Harbor, to Port Allen, then to Honolulu (15-30 June). After embarking the 10 officers and 793 enlisted men of the U.S. Army’s 74st Replacement Battalion, Niagara stood out of Hawaiian waters for the Marshall Islands on 1 July.

Reaching Eniwetok on 9 July 1945, Niagara underwent voyage repairs and awaited further orders (10-16 July). Steaming to the western Carolines in convoy EU-160 (17-21 July), the attack transport anchored at Ulithi, awaiting orders and the formation of another convoy (22-28 July). Underway with convoy UOK-40 (29 July-5 August), Niagara steamed to Buckner Bay, Okinawa, disembarking her troops and discharging cargo and mail upon arrival (5 August). Then, after embarking 40 officers and 771 enlisted men of the U.S. Navy’s 81st Construction Battalion (5-8 August), the ship sailed for the Marianas in convoy OKS-19 (8-14 August). She arrived at Apra Harbor on the morning of 15 August, the day Japan capitulated. Disembarking the Seabees and embarking 15 naval officers and 27 enlisted sailors (15-16 August) for transportation to the Philippine Islands (P.I.), Niagara proceeded independently via Ulithi (16-20 August), and reached San Pedro Bay, Leyte, on 20 August. After disembarking her passengers and loading provisions and fuel (20-22 August), the ship reported to Commander, Transport Division (TransDiv) 53 for temporary duty.

Proceeding to Cebu, P.I., in company with TransDiv 53 (23-24 August 1945), Niagara reached her destination on 24 August and embarked the 31 officers and 645 enlisted men of the U.S. Army’s 164th Regimental Combat Team (RCT) of the Americal Division and loaded its equipment. Underway for Honshu on 1 September, the ship steamed with Task Group (TG) 33.3, and arrived at Yokohama, Japan, on 8 September. Mooring alongside a dock, Niagara disembarked the 164th RCT and its equipment (8-10 September). Again with TG 33.3, the ship returned to Leyte, dropping anchor on 16 September to load provisions and fuel.

Niagara, in company with TransDiv 53, returned to Cebu (17-18 September 1945) and there embarked the 51 officers and 696 enlisted men of the U.S. Army’s 305th Infantry, 77th Division. She transported them to Otaru, Hokkaido, Japan, arriving on 5 October. From there, she transported men of the Navy’s 128th Construction Battalion to Apra Harbor. She stood out on 22 October with an Army signal battalion bound for China. The attack transport reached Tientsin on 29 October and sailed on 10 November for the Marianas, reporting to Commander, Seventh Fleet, for duty on that day. Assigned to Operation Magic Carpet, the massive lift of sailors, soldiers, marines and airmen back to the United States as quickly as possible in the wake of war, she embarked Army troops at Tanapag Harbor, Saipan, Marianas, then sailed on 20 November. She arrived at San Francisco on 4 December.

Niagara departed ’Frisco five days before Christmas of 1945 to return to the Philippines, arriving off Samar on 10 January 1946. During her voyage, on 3 January 1946, the ship was earmarked for use as a target for the testing of atomic weapons in Operation Crossroads. She put to sea on 3 February to carry out stripping ship and other preparations at Pearl Harbor.

Ordered on 11 May 1946 to report to Commander, Joint Task Force (JTF) 1 for duty, Niagara did so on 16 May. Sailing on to Bikini Atoll in the Marshalls, she arrived there on 31 May. Assigned to TU 1.2.6 (Merchant Type Unit) as a target vessel, Niagara lay moored some 3,318 yards south-southeast of where Test Able was to occur. Niagara’s crew evacuated to the attack transport Bayfield (APA-33) between 0805 and 1528 on 30 June, with Bayfield shifting to waters 18 nautical miles east of Bikini.

Shot Able occurred at 0900 on 1 July 1946, and a little over four hours later (1307), the net laying ship Oneota (AN-85) sent a team on board Niagara. A little less than a half hour later, the auxiliary tug ATA-192 came alongside and extinguished a small fire on board Niagara without having to put men on board to do so. Oneota’s team reported Niagara Geiger “sweet” at 1524, and at 1610 declared the ship free of radiological contamination.

Capt. William H. Standley, Jr., Niagara’s commanding officer, accompanied by a party of six officers, 19 enlisted men (Team A), and a radiological monitor from the hospital ship Haven (AH-12), came on board to inspect and open up the ship shortly after mid-day on 2 July 1946. A second team (Team B), four officers and 24 enlisted men, came on board to light off the boilers at 1425, with the radiological monitor returning to Haven at 1559. All remaining members of Niagara’s ship’s complement (Team C) reported back to the ship a little over an hour later, at 1715 on 2 July, and the entire ship’s company resided on board until the morning of 24 July, with all hands transferring again to Bayfield by 1046 on that date.

In the aftermath of Shot Baker (0835 on 25 July 1946), Commander TU 1.2.7 cleared Niagara for boarding, and a team from the salvage vessel Preserver (ARS-8) did so between 1210 and 1235 on 25 July. Despite that positive assessment, however, instrumentation and boarding teams visited the ship later on the 25th, and again on the 27th and 28th. It was not until 0748 on 29 July that Capt. Standley and Team A departed Bayfield to reboard their own ship, doing so at 0826 to find no apparent damage. Niagara shifted her berth (1535-1607) to drop anchor in berth 381, and at 1615 the remainder of the crew returned with their baggage and gear. The following day, her men washed down all decks and bulkheads in compartments above the waterline with soap and water, and scraped the ship’s sides down to a distance five feet below the waterline to remove marine growth. She put to sea the following afternoon to conduct washing of her sides. Further scraping took place on 2, 3, and 4 August, with radiological inspectors declaring the ship radiologically safe and giving her clearance on 5 August to depart Bikini, which she did on 21 August 1946.

Pausing en route back to the west coast of the United States at Kwajalein (28-29 August 1946) for further decontamination, and Pearl Harbor (5-10 September), Niagara reached San Francisco, her final decontamination location, on 16 September. Clearing San Francisco on 30 October, she visited San Diego (31 October-7 November) before pushing on for the Canal Zone, reaching Balboa on 15 November to transit the Panama Canal. After a brief authorized layover, Niagara sailed for the Fifth Naval District on 18 November, and reached Norfolk, Va., on 23 November. She was decommissioned at the Norfolk Naval Shipyard on 12 December 1946.

Placed in “deferred disposal status” on 28 July 1947 pending possible tests of conventional explosives, Niagara was towed from Norfolk on 9 April 1948 by the fleet tug Hopi (ATF-71) to the waters of Chesapeake Bay, off the mouth of the Patuxent River, where she joined two other vessels (their construction halted shortly before V-J Day) slated for the same tests: the aircraft carrier Reprisal (CV-35) and the light cruiser Newark (CL-108). Following that period of experimental work, the explosions designed to “cause damage that will vary from minor derangements of equipment to severe local distortion and rupture of structural members…to permit extensive study of the shock and vibration effects.” Niagara was towed, again by Hopi (13-14 August), to the James River berthing area for lay-up.

Deemed on 21 February 1949 to be “not essential to the defense of the U.S.,” Niagara was stricken from the Naval Register on 23 March 1949. She was sold to the Northern Metals Co., Philadelphia, Pa., to be broken up for scrap. The veteran of service in the occupation of the erstwhile enemy’s homeland and participant in tests to determine “construction characteristics of all future ships” was delivered to the purchaser’s representative on 5 February 1950.